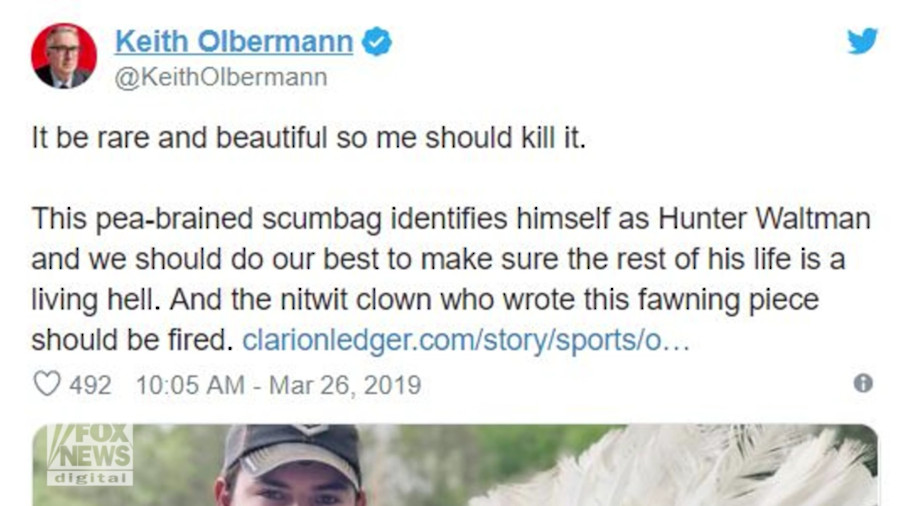 Keith Olbermann is apologizing for his earlier call to arms against a turkey hunter. (Photo: Fox/Twitter)

ESPN talking head Keith Olbermann issued a public apology for comments he made about a turkey hunter, calling him a “nitwit clown” and that the public should “make sure the rest of his life is a living hell.”

“I am an opponent of trophy hunting and remain so, but nobody should feel threatened,” said Olbermann. “This was anything but my intent, so I unreservedly apologize to Mr. Waltman for this tweet.”

“We have spoken to him about not making personal attacks,” ESPN told Fox News.

The original Clarion-Ledger story focused on Hunter Waltman, who spent months tracking and stalking a particularly odd turkey on his property. The turkey had all-white plumage and nails but a solid black beard.

“It be rare and beautiful so me should kill it,” Olbermann said earlier on Twitter.

“This pea-brained scumbag identifies himself as Hunter Waltman and we should do our best to make sure the rest of his life is a living hell,” he continued. “And the nitwit clown who wrote this fawning piece should be fired.”

“Keith Olbermann says Brian Broom should be fired for writing this story,” said the Clarion-Ledger’s executive editor Sam R. Hall. What was I thinking? I guess I should have fired our outdoors writer for writing about a hunter killing an unusual turkey during turkey hunting season.”

“Keith Olbermann‘s tweet was recklessly irresponsible,” Hall added. “Someone with his following needs to understand the possible impact of his words. Telling over 1 million people to make someone’s life a living hell could have seriously dangerous consequences. In our newsroom, that would be a fireable offense, not writing a story about a hunter bagging a turkey.”

Walman feels threatened by Olbermann’s statement. He claims since the tweet people have made verbal attacks toward him and openly wished him harm.

“I didn’t like the idea of that too much,” said Waltman in a follow-up. “I don’t think a lot of people would like to be called out on social media like that, especially with so many followers.

“They text me all kinds of stuff. If he hadn’t done that, none of this would have happened.”