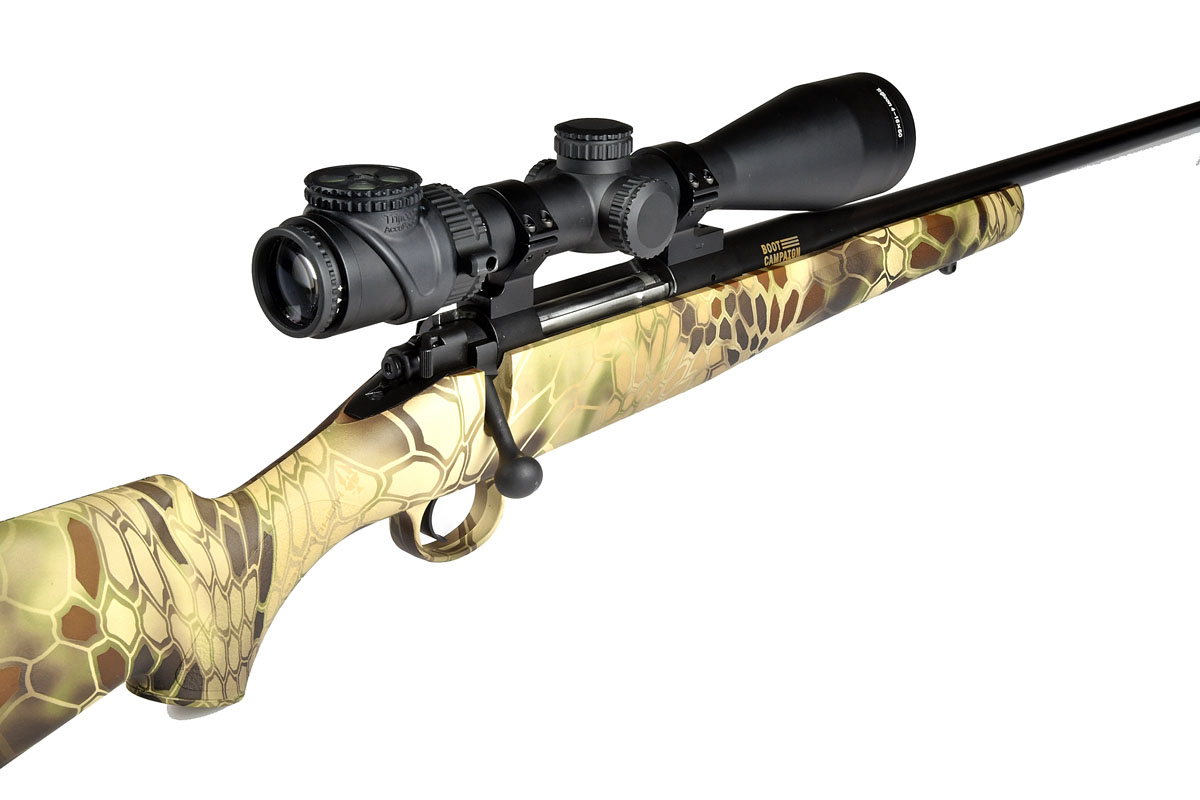 Weighing just 5.5 pounds, the Kimber Hunter Boot Campaign rifle packs easily, handles great and will do the job when it counts.

Some rifles just have a way of catching your eye. Maybe it’s the trim, svelte lines of a mountain rifle that beckons you to pick it up to feel how light it is. Maybe it’s a distinctive camo pattern on the stock or the sight of a controlled-round-feed action and Model 70-style safety. And maybe, sometimes, it’s the price tag.

For me, in the case of the Kimber Hunter Boot Campaign rifle, it was all of the above.

A couple of years have passed since the Kimber Hunter rifle was introduced as a more affordable alternative to Kimber’s higher-priced rifles, but I somehow never got around to testing one. That changed when I spotted a very special version of the Hunter rifle while visiting with Kimber at the SHOT Show. 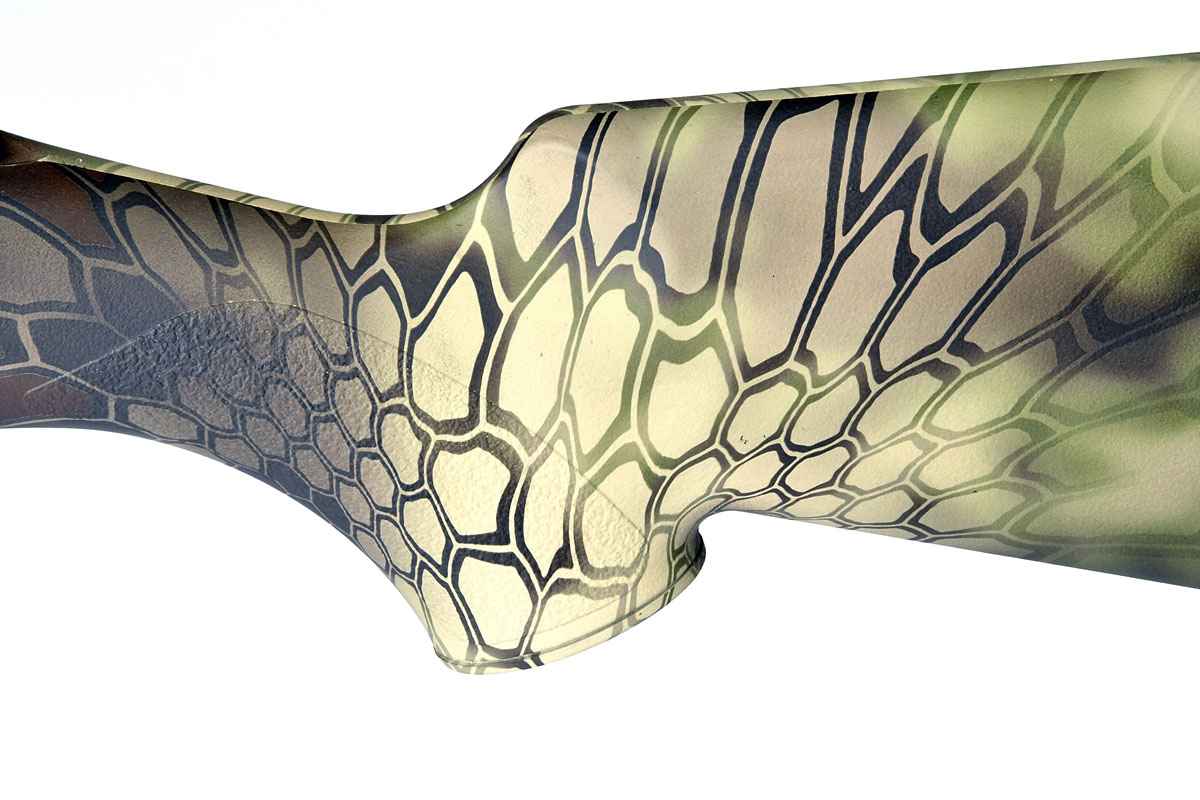 The Boot Campaign Hunter is the only rifle in Kimber’s lineup adorned with the Kryptek Highlander camo pattern.

That rifle was a trim little featherweight wearing a Kryptek Highlander camo stock. It is the only rifle in Kimber’s stable to wear that pattern, and that’s by design. This model was created to help support the non-profit Boot Campaign, which provides life-improving health and wellness programs that help veterans and their families struggling with traumatic brain injury, post-traumatic stress disorder, chronic pain, self-medication, and insomnia. Kimber donates a portion of the proceeds from the sale of each Boot Campaign rifle to support this most worthy cause.

Apart from making fine 1911 pistols, Kimber has long been known for making very light rifles, and the Boot Campaign Hunter, tipping the scales at just 5.5 lbs., continues that tradition. Kimber’s slimmed-down 84 actions with their reduced-circumference bolts are partly responsible for that, along with sporter-profile barrels and lightweight stocks. There are tradeoffs, to be certain, with rifles this light, but they’re an ideal choice if you’re looking to shed every ounce of extra weight in a rifle that packs easily and does the job when it counts. 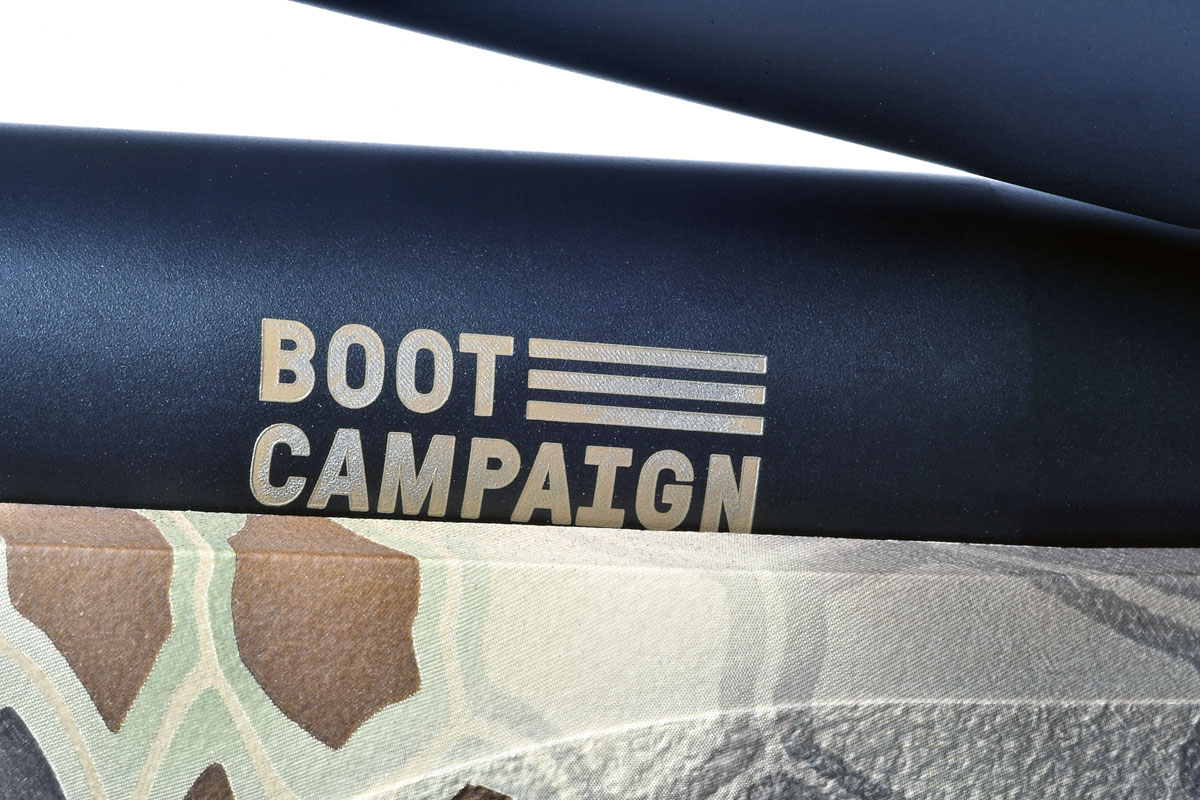 A “Boot Campaign” marking on the side of the barrel denotes that this model was produced to support the non-profit veterans’ support group.

The Hunter Boot Campaign rifle is chambered for seven different cartridges, including a couple that might surprise you. In addition to 243 Win., 270 Win., 308 Win., 7mm-08 Rem. and 30-06 Springfield, the Boot Campaign Hunter is available in 25-06 Rem. and 280 Ackley Improved. Depending on the chambering, the Hunter is built upon either Kimber’s 84M or 84L action. Rifles using the shorter cartridges (243, 308 and 7mm-08) use the 84M action and have 22-inch barrels, while all others have 24-inch barrels and the longer 84L action.

The Hunter borrows from designs of the past by employing a time-proven, controlled-round-feed action with a Mauser-style extractor and fixed ejector. Atop the right rear of the action, you’ll find a three-position Model 70-style safety lever which locks the bolt down with the safety in the rear, or engaged, position. The safety is also engaged in the middle position, but the bolt is not locked down. 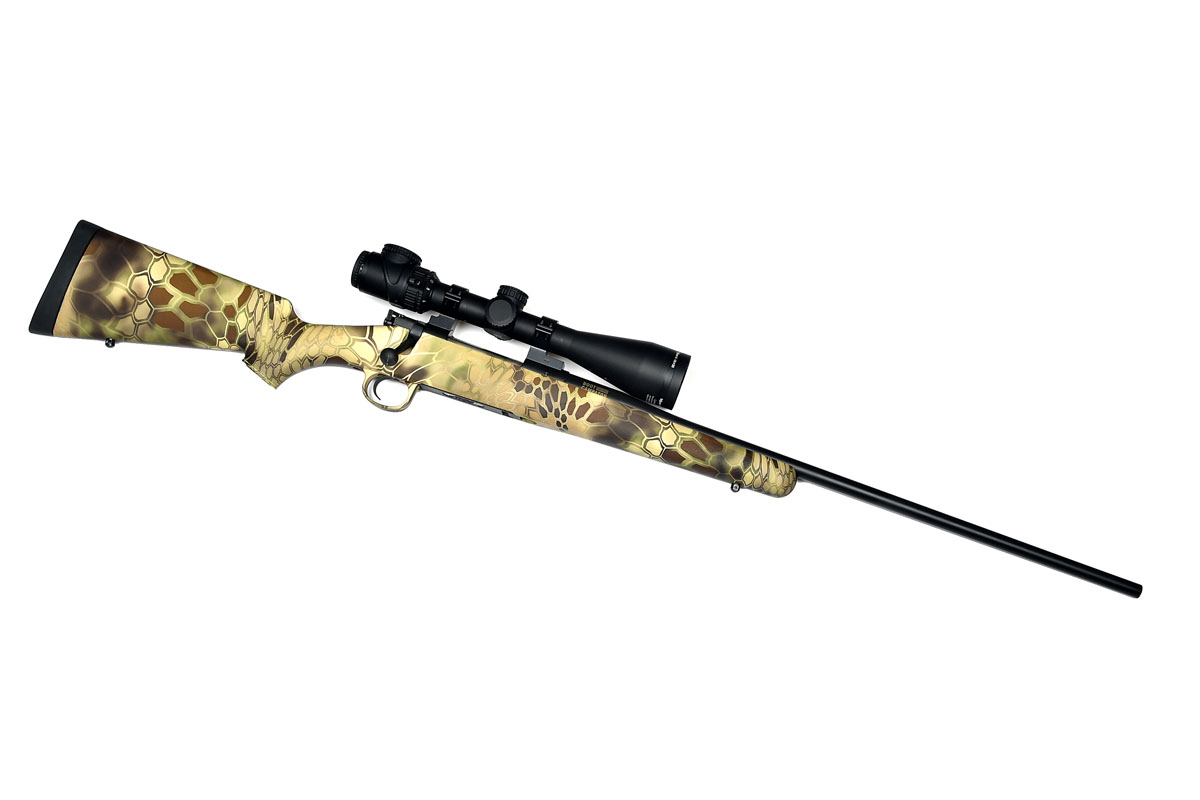 Since the action and barrel are essentially the same as those found in more expensive Kimber rifles, you might be wondering how Kimber could bring this rifle to market with an MSRP of $990 (and a real-world price considerably below that). Most of the cost reduction was achieved with the composite synthetic stock which has nary a trace of bottom metal—not even on the trigger guard. The rifle uses a detachable magazine. 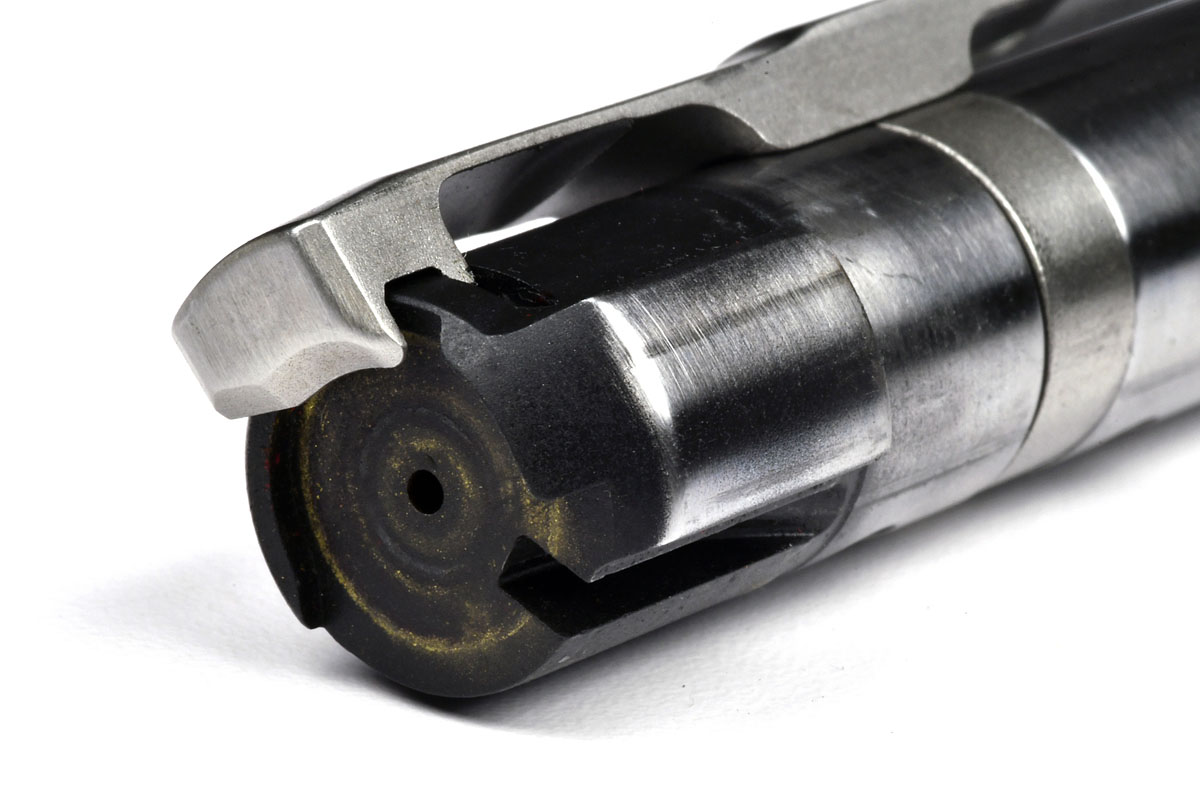 The tested rifle, chambered in 270 Win., was built on Kimber’s slimmed down 84L receiver with its reduced-circumference bolt.  It is a controlled-round-feed design, employing a Mauser-style extractor.

I wasn’t too sure about the Kryptek Highlander camo pattern the first time I saw it on a firearm, but I’ve had the opportunity to use guns with that pattern in habitat types ranging from arid country dominated by browns to spring turkey hunts where everything was green. The Kryptek Highlander pattern seems to blend into just about any environment.

The stock, I was pleased to discover, came with a full-size, one-inch soft rubber recoil pad that did a surprisingly good job of mitigating recoil, which wasn’t nearly as significant as I anticipated from such a light rifle. 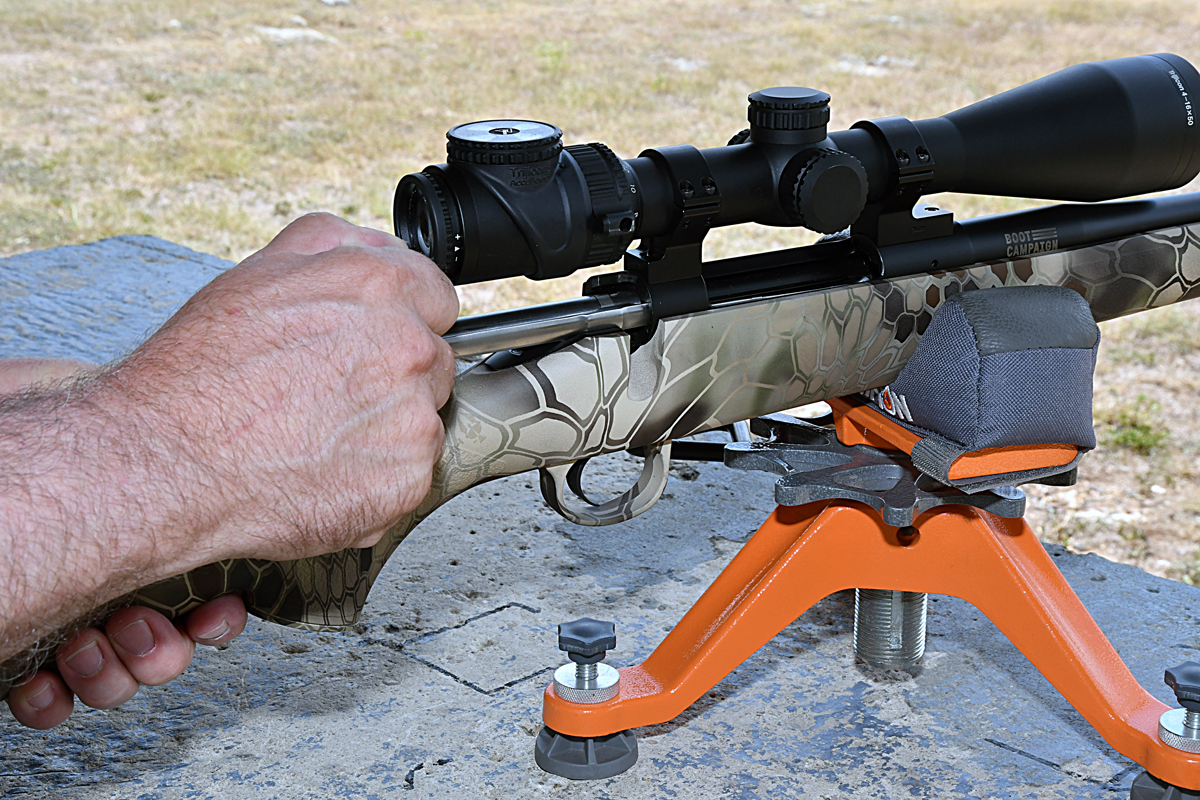 Bolt cycling was smooth with the test rifle, and there were no issues with feeding from the rifle’s detachable magazine.

Barrels used with Hunter rifles have four-groove rifling and caliber-appropriate rates of twist. The rifle sent to me for testing, chambered in 270 Win., had a 1:10 twist rate. Barrels are stainless steel with a KimPro II protective finish. The barreled actions are pillar-bedded to the composite stock.

In the hands, the Hunter has the same fit and feel as other Kimber rifles, which is to say it fits quite well and handles nicely. If I had to find something to criticize, I found the stippling on the grip areas of the stock to be a bit weak, and I’m not sure how well it would contribute to a solid grip in cold, wet conditions. I also quickly noticed that the barrel isn’t quite centered in the stock’s barrel channel, but it did remain truly free-floated, even when the barrel was hot. The rifle passed basic function tests without a hiccup. The bolt cycled smoothly, and the rifle had no issues feeding rounds from the detachable magazine. Extraction and ejection went off without a hitch. 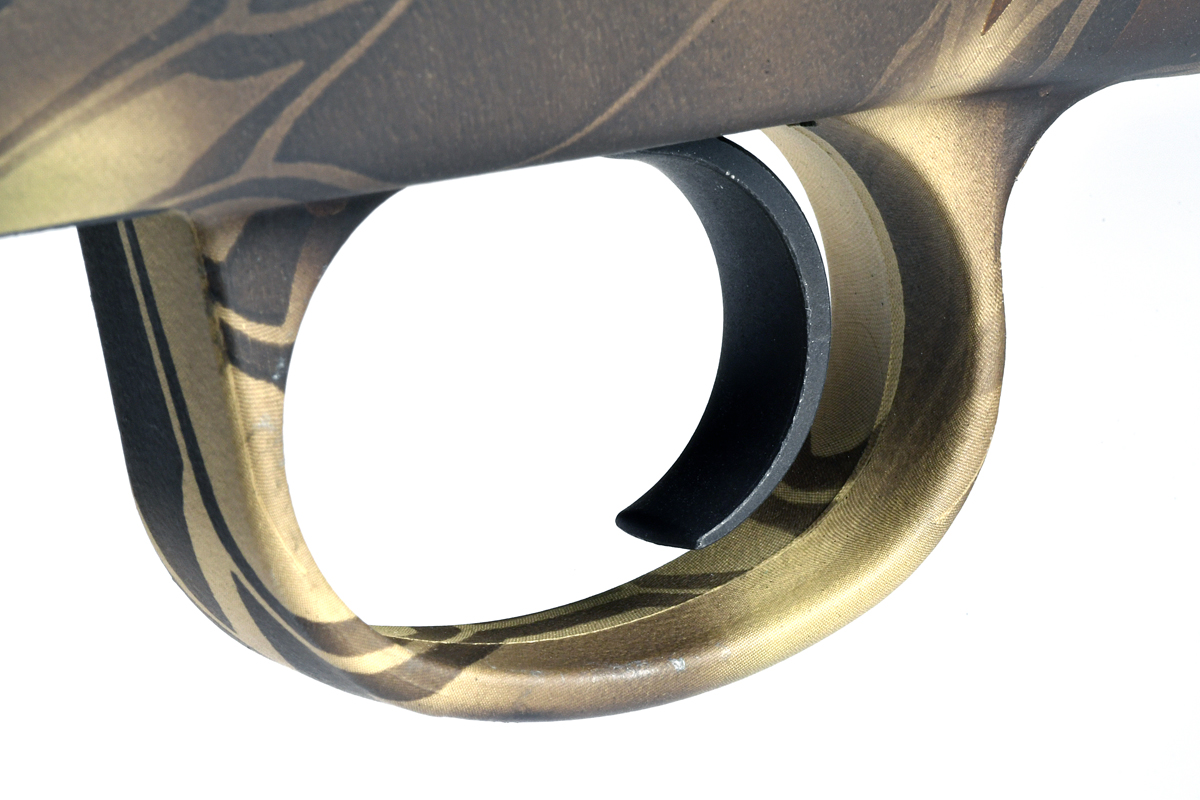 The trigger, adjustable down to a pull weight of about 3 lbs., felt lighter than that because it broke so crisply, with no creep.

In what I’ve come to view as a sign of these litigious times, the rifle, like so many these days, arrived from the factory with a trigger pull that was considerably heavier than most hunters need or favor. Kimber says the trigger is adjustable within a range of 3 to 4.5 lbs., but when measured with a Lyman trigger gauge, the trigger on my test rifle broke at 4 lb. 14 oz. I consulted the owner’s manual for instructions on adjusting the trigger and found it to be less than helpful. I suspect that is by design, as the manual simply states that the trigger had been set by Kimber for proper overtravel and sear engagement and, if you believe it needs to be adjusted, you should contact Kimber or a gunsmith.

Not much fancying the likely results of trying to shoot tight groups with such a light rifle and heavy trigger, I spoke with a Kimber technician to guide me through the relatively simple process of adjusting the trigger. Proceeding cautiously, as the technician advised, I was able to back off the trigger to an average pull weight of 3 lbs., 11 oz., and decided to leave it there, after completing the usual safety checks, rather than push my luck. The trigger broke so crisply and cleanly, with nary a hint of creep, that it felt lighter than that, and I would now classify it as an excellent hunting trigger. 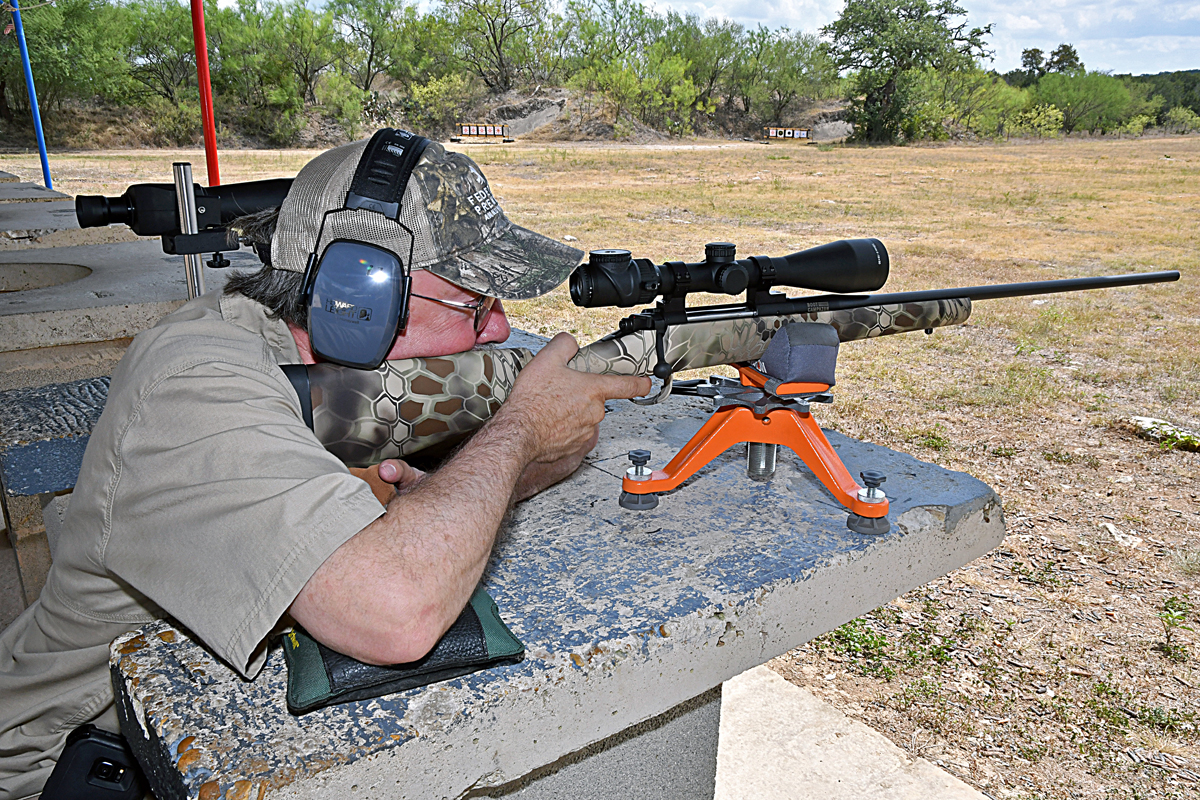 The author put the Hunter through its paces on a day when the wind varied 7-12 mph, and the rifle still delivered very good accuracy for such a light rifle.

According to Kimber, the Hunter rifle should meet a three-shot sub-MOA accuracy standard, and my test rifle arrived packaged with a test target showing a group measuring 0.74 in. That group was shot with Hornady’s Custom Lite reduced recoil 120-gr. SST load, but that same load did not perform quite as well for me in testing. Happily, a couple of other loads did, as you’ll see in a moment.  It’s worth noting that four of five tested factory loads produced average velocities, as measured over a Competitive Edge Dynamics M2 chronograph, that was slightly faster than factory-stated velocities for those loads, indicating the rifle has a somewhat “fast” barrel.

For hunting, I would likely mount a lightweight variable or fixed 6X scope on the rifle to keep the weight at a minimum, in keeping with the gun’s intended purpose as an easy-to-carry, go-anywhere hunting rifle. To see what the rifle could do from the bench, however, I opted for higher magnification, mounting a Trijicon Accupoint 4-16X50 scope in a set of Talley lightweight rings. 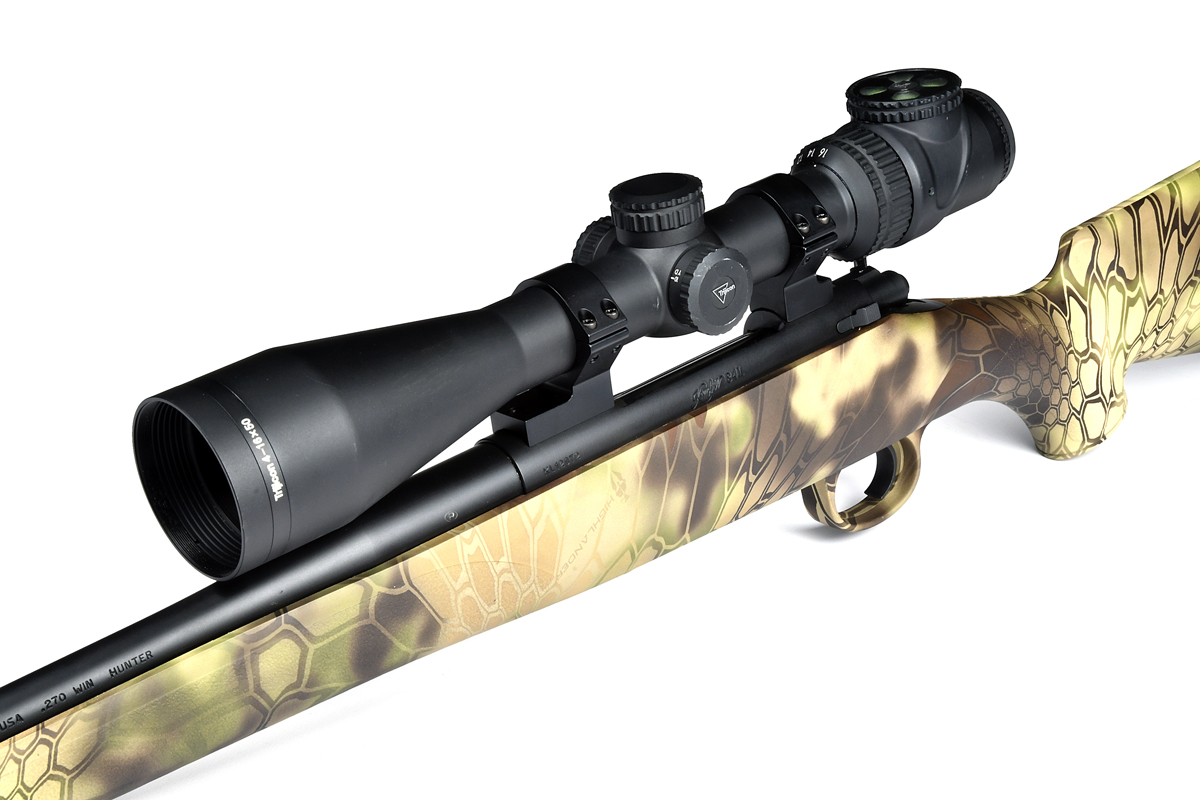 For testing, the author mounted a Trijicon Accupoint 4-16X50 scope in a set of rock-solid Talley lightweight rings.

Since the rifle has a sporter-profile barrel, measuring just 0.55 in. at the muzzle, I forwent testing with the usual five-shot groups and measured accuracy with three-shot groups. Rifles with such thin barrels aren’t designed to produce tack-driving accuracy with long shot strings, as groups typically open up as the barrels heat up. That means such rifles seldom fare well when tested with five-shot strings, but that matters little in a rifle designed purely for hunting, as game animals are highly unlikely to stand around while being shot at all day.

The Hunter’s thin-profile barrel heated up quickly in testing, but the rifle still delivered sub-MOA average groups with two factory loads, showing a surprising preference for affordable hunting rounds versus the high-end stuff. Although the rifle disliked a couple of rounds I fed it, the Federal Fusion 130 gr. load stole the accuracy show by turning in average groups measuring just 0.86 in. and a best group of 0.37 in. Average group size for Hornady’s 130-gr. American Whitetail load were slightly under one inch, with a best group of 0.89 in.

Give me a hunting rifle that groups three rounds that well—never mind one weighing just 5 lbs. and change—and I’ll be a happy hunter. I suspect you will be, too. 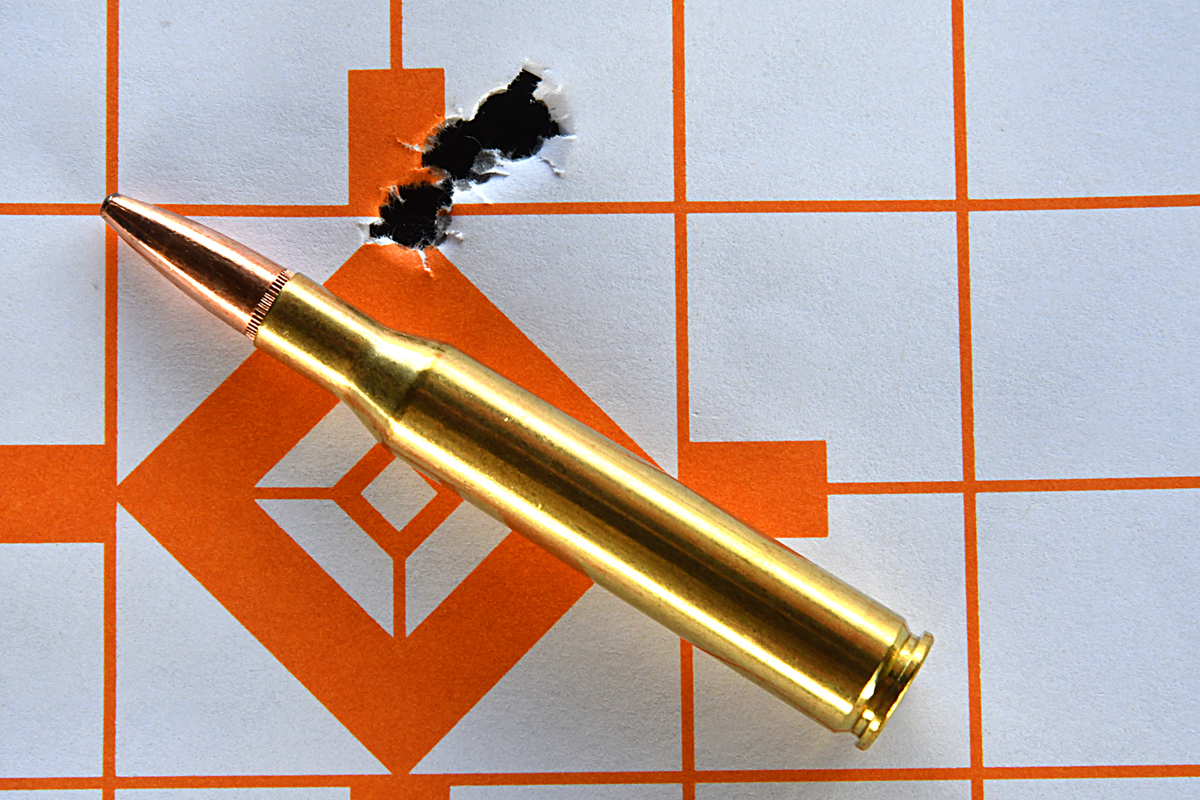 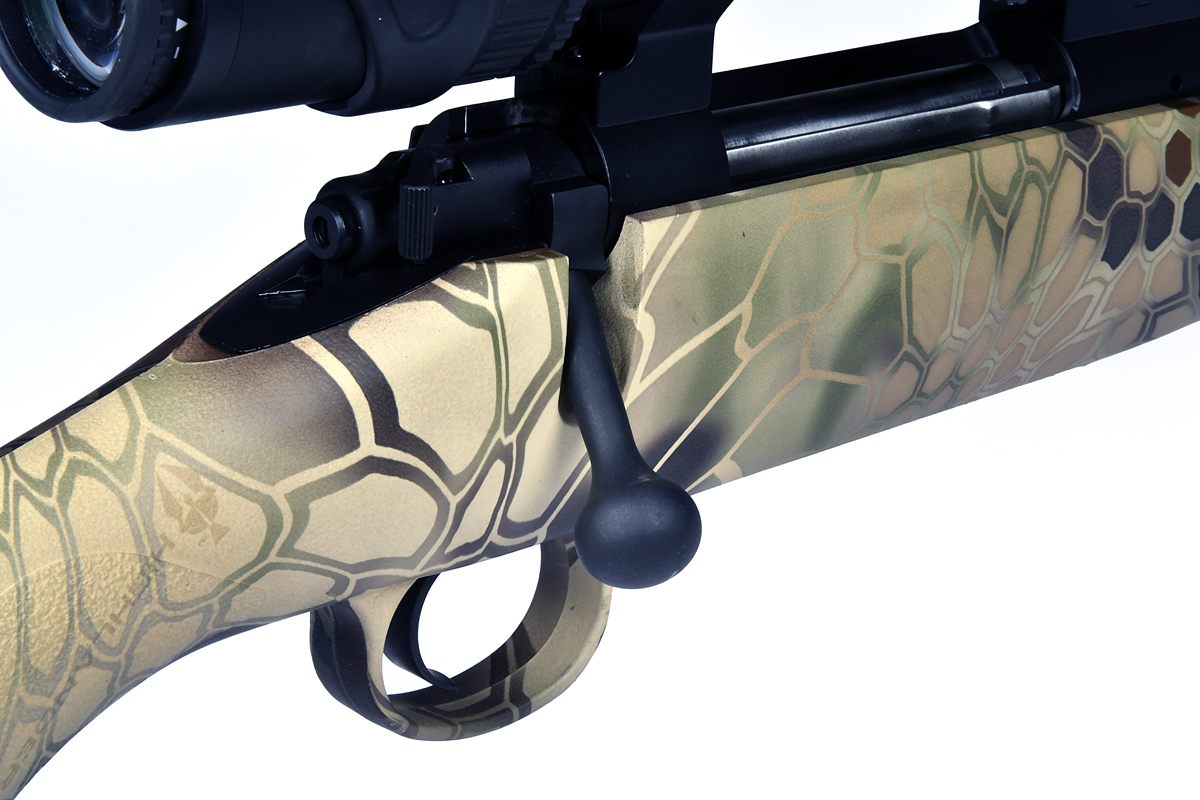 Priced considerably less than Kimber’s other rifles, the Hunter has essentially the same action and barrel as pricier models. 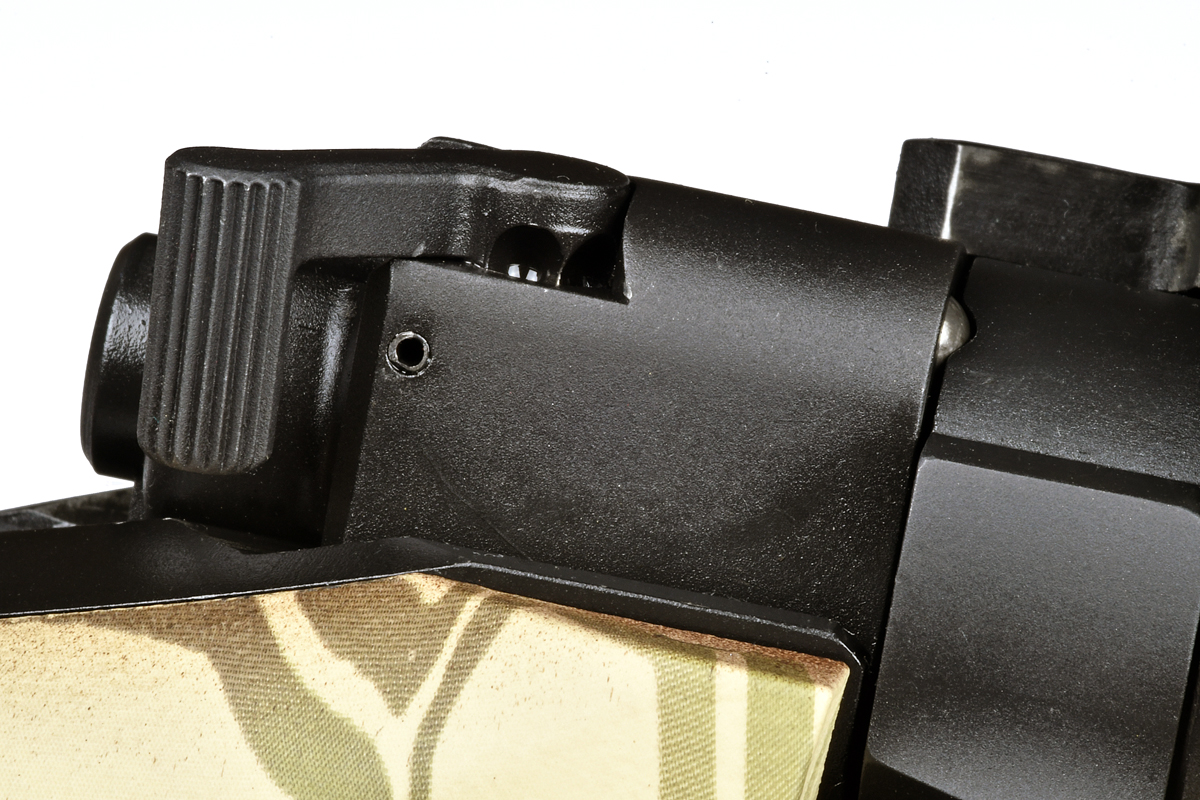 Sights: None, drilled and tapped

***Shop GunsAmerica for your next Kimber Hunter***