Legendary Arms Works is back in business, after a brief hiatus, and that is a good thing. Based in Reinholds, Pennsylvania, Legendary Arms Works came onto the scene just a few years ago with a great pair of rifles: The Professional and The Big Five. The latter was their big bore rifle, chambered in .375 H&H, .416 Remington Magnum and .458 Lott, but it was The Professional which was offered in a wide variety of more common calibers, from .22-250 up to the .338 Winchester Magnum. It proved to be an excellent rifle; I took one to South Africa–chambered in .300 Winchester Magnum–for a plains game safari, taking a good waterbuck and a handsome kudu bull. 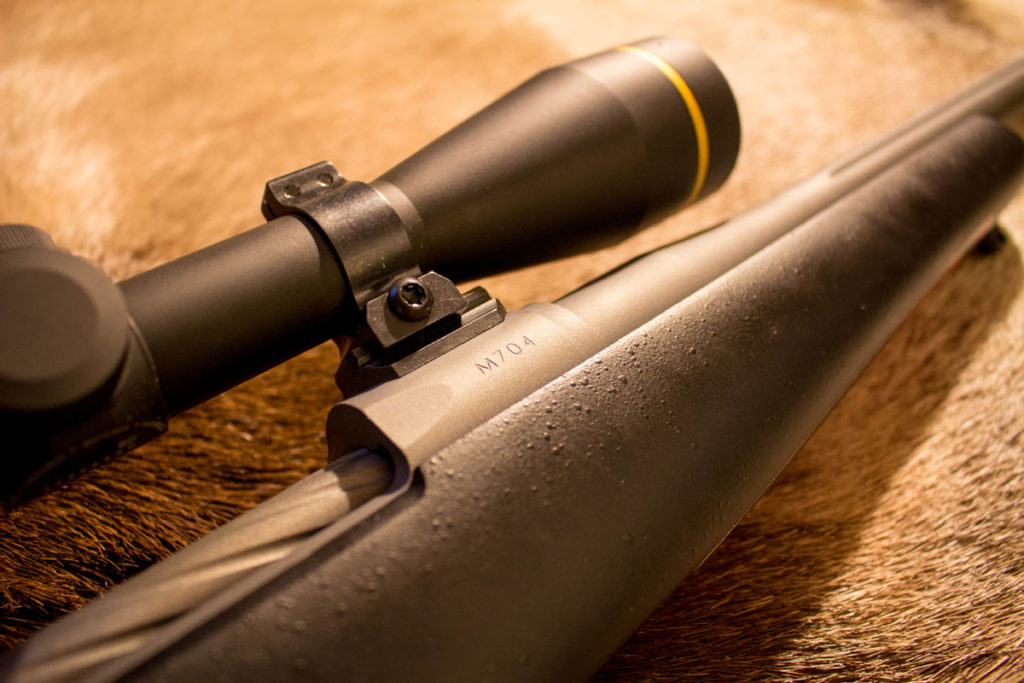 After some corporate reshuffling, and some time on the bench, Legendary Arms Works has released the successor to the Professional: The Professional II. It retains all the good features of the Professional, with some upgrades that are a definite improvement. The heart of the rifle is the Ed Brown M704 action, and it is an action that not only makes complete sense to the traveling hunter but is a unique design that blends the features of the two most popular action types. 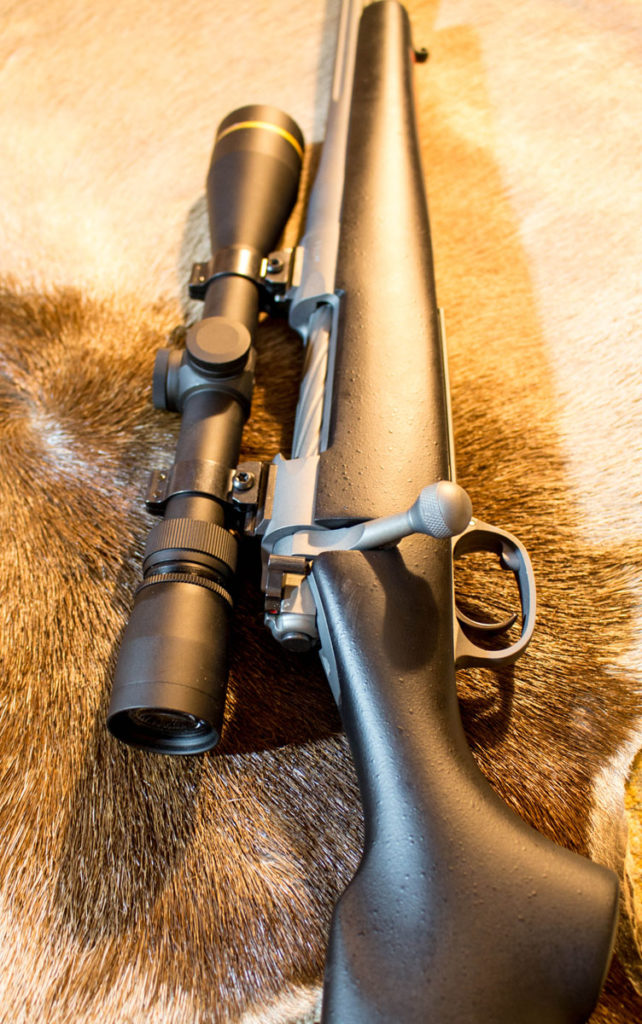 With a three-position safety and rear cocking indicator, the M704 action retains some familiar features, with the exterior appointments reminiscent of the Winchester M70

The M704 is a controlled round feed action, but not in the sense of the traditional Mauser M98 and its many clones. It maintains a 90-degree bolt throw and uses a round receiver profile to assist in bedding the action. It does not have the huge, non-rotating claw extractor, instead using a two-lug bolt with one-third of the bolt face circumference opened to allow the bolt face to pick the cartridge up from the magazine. The spring-loaded extractor takes up a full quarter of the bolt face, and I can attest to the fact that in cartridges from 6.5 Creedmoor, to .308 Winchester and .300 Winchester Magnum, up to the .375 H&H Magnum and .404 Jeffery, I’ve never had a single issue with the M704. I’ve taken the M704 to Alaska for bears, Africa for antelope, as well as carrying it in my native Catskill and Adirondack Mountains. The design is sound and certainly dependable. 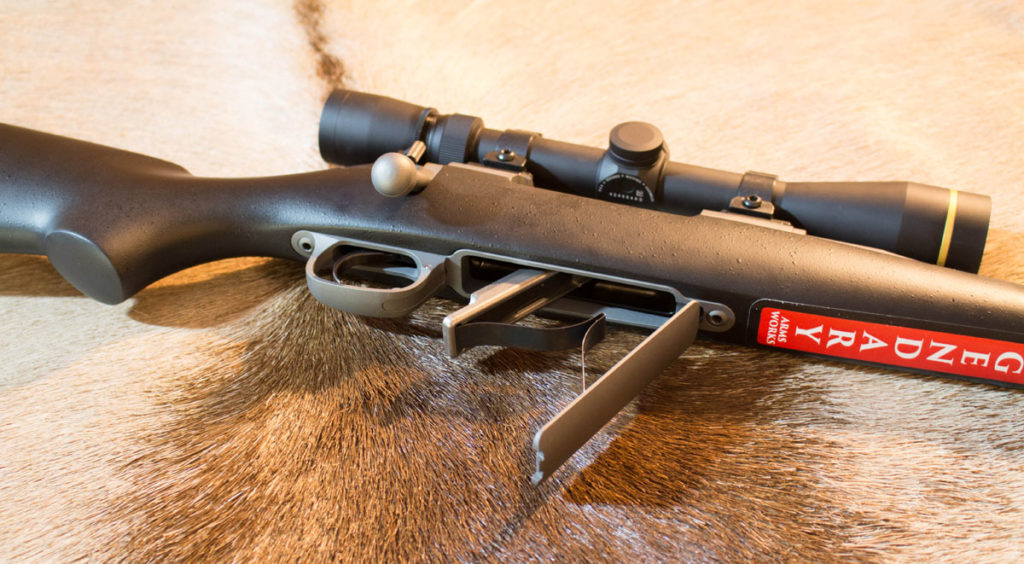 The hinged floorplate and magazine follower of the Professional II.

Legendary Arms Works uses a fluted bolt, with a one-piece handle; the bolt knob has a knurled ring–slightly reminiscent of the post-’64 Winchester Model 70–that affords a positive grip for cycling the action. The bolt is easily field stripped; simply cock the rifle, put the safety into the middle position, and use the bolt release on the left side of the receiver to remove the bolt. A small tab on the left side of the bolt shroud allows the user to rotate the bolt 2/3rds of a turn and the firing pin assembly is easily removed. The one-piece firing pin and spring can be cleaned and lubricated in the field if needed. 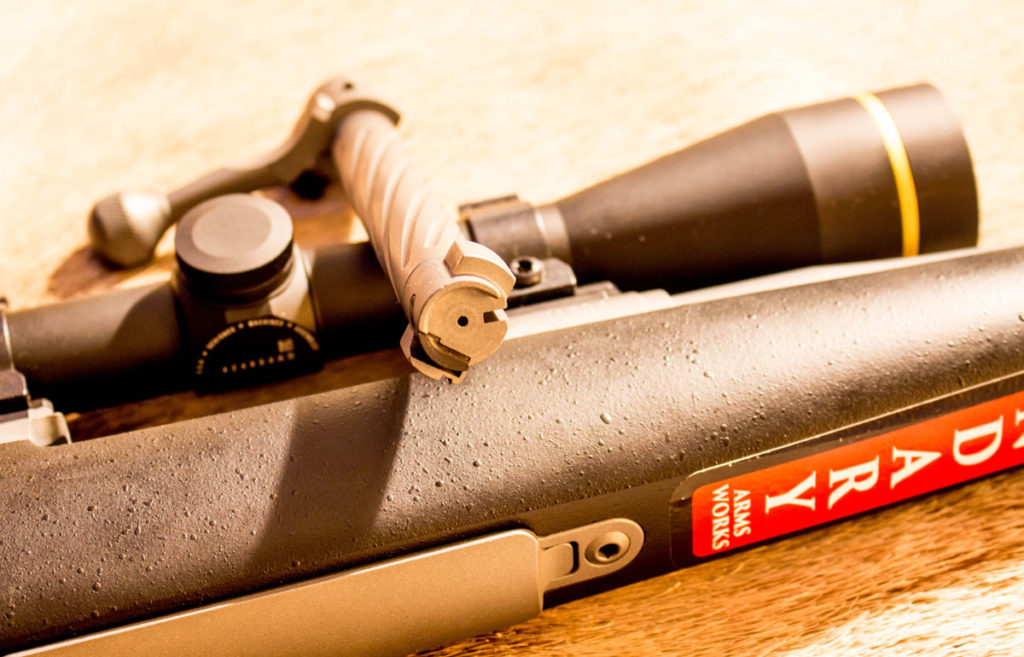 The bolt face of the Professional II; note the large extractor, extractor slot and opening at the bottom of the bolt face. 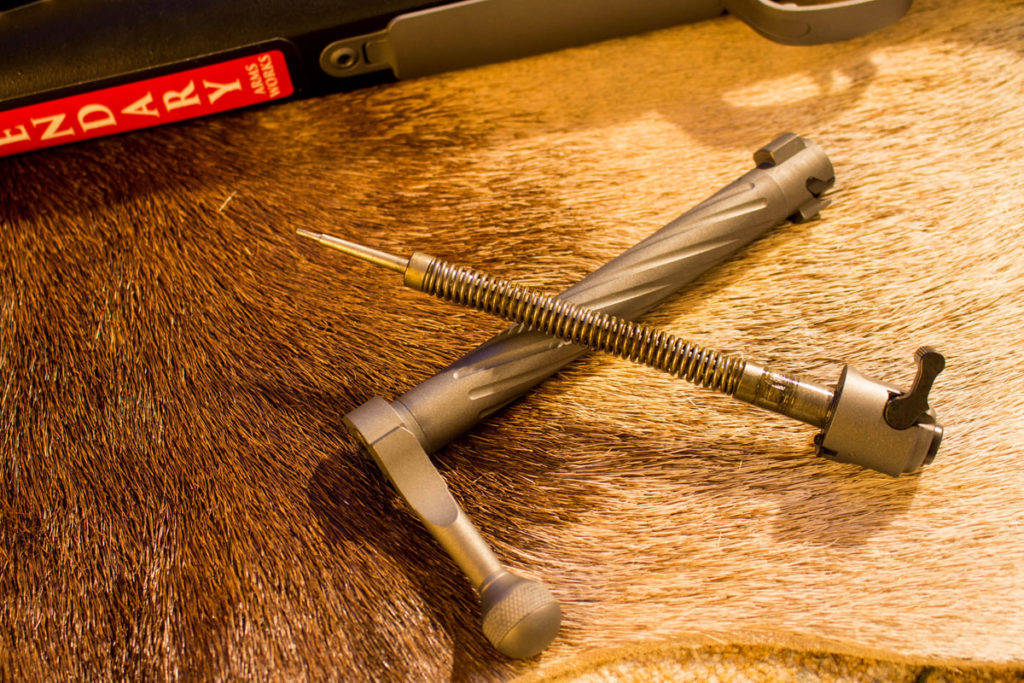 The M704 action uses a three position wing safety, in the style of the Winchester Model 70; forward is the fire position, the middle position prevents the rifle from firing but allows the shooter to safely unload the rifle, and the rearward position blocks both the trigger and the bolt from moving. A fixed blade ejector kicks the spent casings wide of the receiver; a slot in the bolt face at the four-o’clock position mates up with the blade ejector. There is a cocking indicator at the rear of the bolt shroud so the user can tell at a glance whether or not the rifle is cocked. 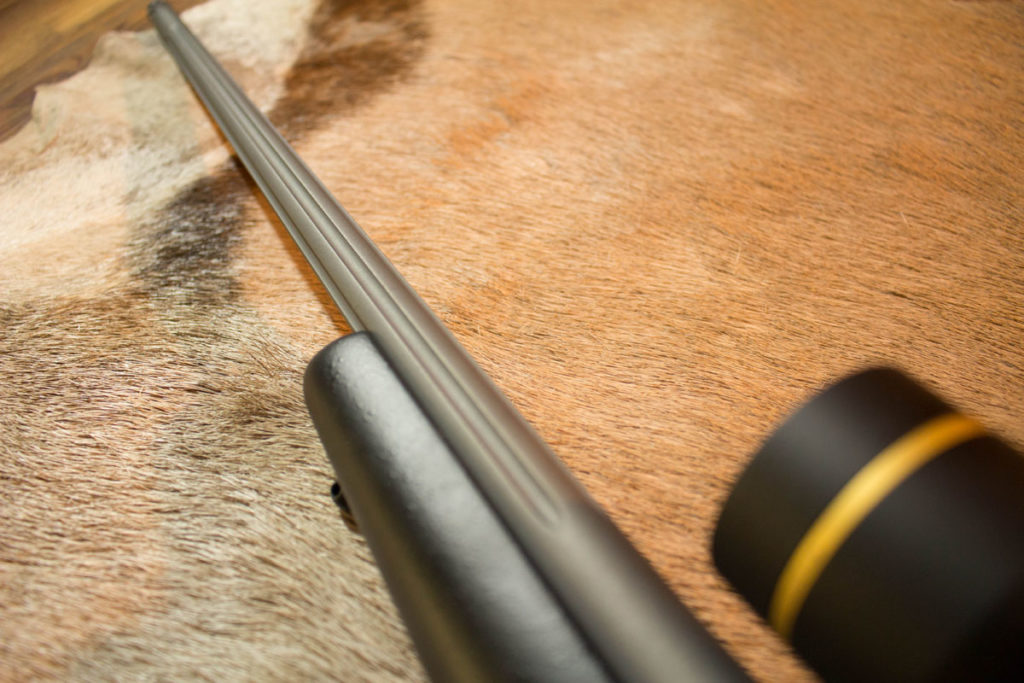 The fluted barrel of the Professional II reduces weight and dissipates heat.

A 24”-inch Wilson Arms fluted, stainless steel barrel is screwed onto the M704 action; it is a match grade, triple lapped barrel, with a removable muzzle brake. A cap is provided so the owner can remove the brake, should they prefer to avoid the ear-splitting report a muzzle brake can generate in the hunting fields, where ear protection is rarely used. I have learned to despise muzzle brakes on my hunting rifles; my ears have taken a pounding over the years and I prefer not to accelerate the damage. If I truly need to use a muzzle brake – due to excessive recoil – I’ll simply choose a cartridge with less recoil. However, Legendary does give the owner the option. The Professional II’s barrel is clean, devoid of iron sights. The receiver is drilled and tapped for scope mounts with 8-40 threads; Legendary provides Weaver-style Mil-Spec 1913 bases with the rifle.

A hand-tuned Timney trigger runs the entire operation; I have come to truly enjoy Timney’s products, as they give a good feel with little or no creep or over-travel. My Legendary test rifle’s trigger came set to break at 2 lbs., 12 oz., and broke like an icicle. Legendary uses a one-piece aluminum trigger guard/bottom metal; the hinged floorplate is released via a button on the inside of the trigger guard, at the forward end. All the exposed metal–receiver, bolt, barrel, and bottom metal–is finished in what Legendary calls a Tactical Gray Cerakote finish; it is one of the few finishes that even my acidic hands can’t destroy, and I’ve worn the bluing off a floorplate on a seven-day safari.

The Professional II’s magazine follower is rather unique, as it loads the first cartridge down to the left, unlike most other traditional followers. My test rifle, chambered in .300 Winchester Magnum, held four in the magazine, with the option of a fifth in the chamber.

The Pro II is stocked in hand-laid fiberglass, with a pliable Pachmayr Decelerator recoil pad, which can take the sting out of just about any cartridge. Legendary Arms Works offers three color choices: Green Speckle, Brown Speckle, or–like the test rifle I received–Black on Black Speckle. The stock has a textured feel; smooth enough to be comfortable yet rough enough to afford a good grip anywhere on the stock, even with gloves. There are no enhanced areas on the forend or pistol grip, it’s a uniform finish that I like.

Fire in the Hole 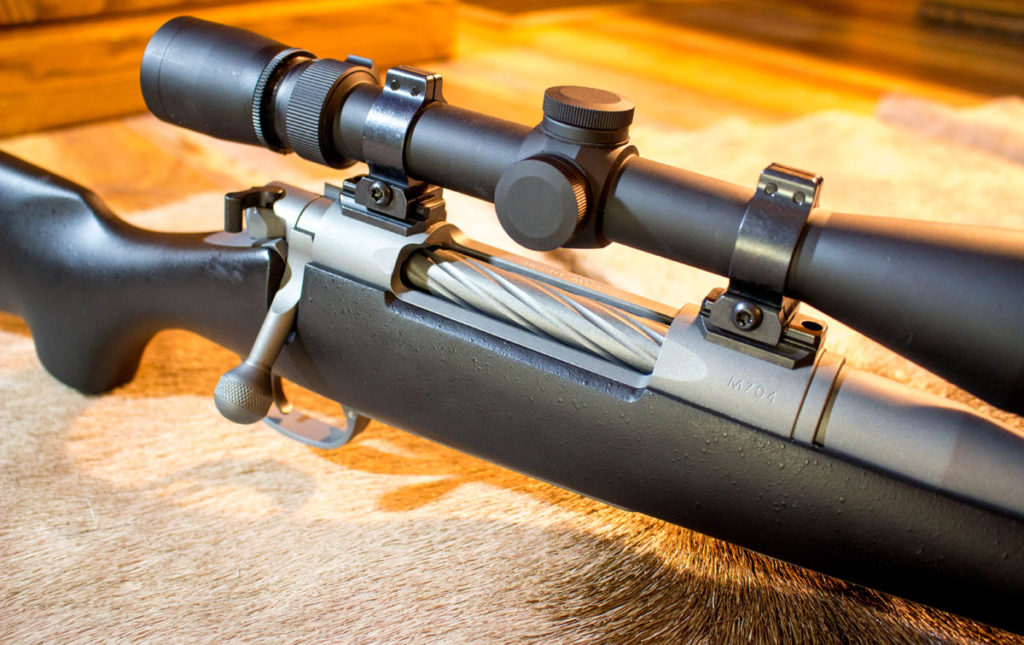 Right side of the Professional II’s receiver. 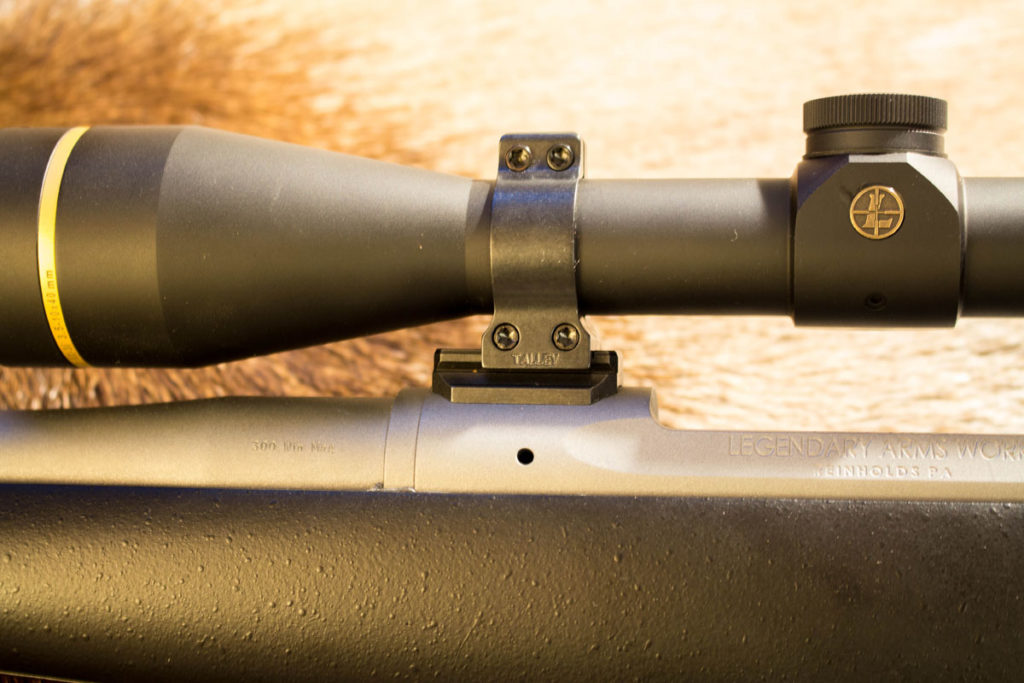 The Leupold VX-3i 3.5-10x40mm scope, set in Talley rings and bases, makes a durable and sensible choice for the Professional II.

To test the Professional II, I grabbed one of my favorite all-around riflescopes – a Leupold VX-3i 3.5-10x40mm with a simple duplex reticle – set it in Talley rings and bases, and headed to the backyard range. One of the wonderful things about Talley’s products is that, if installed properly, a little adjustment needs to be made to the riflescope. Throw a boresighter on the rifle and you’ll generally find that things are aligned within three or four minutes, and that allows the scope to operate in the middle of its range, where it usually takes adjustment best. The Leupold 3.5-10x gives a good magnification range for a number of hunting scenarios, from close shots in the hardwoods to the distant shots that the .300 Winchester Magnum makes so well. It’s a simple design, with few moving parts and that’s a big part of the allure to me; it’s light, rugged, and dependable, much like the Professional II itself. 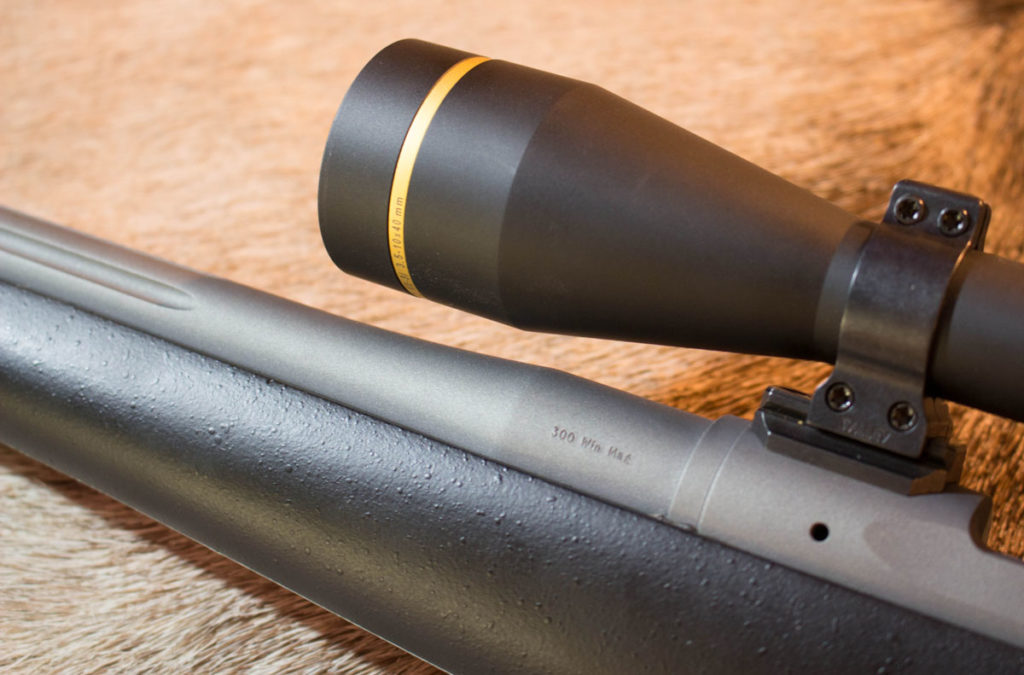 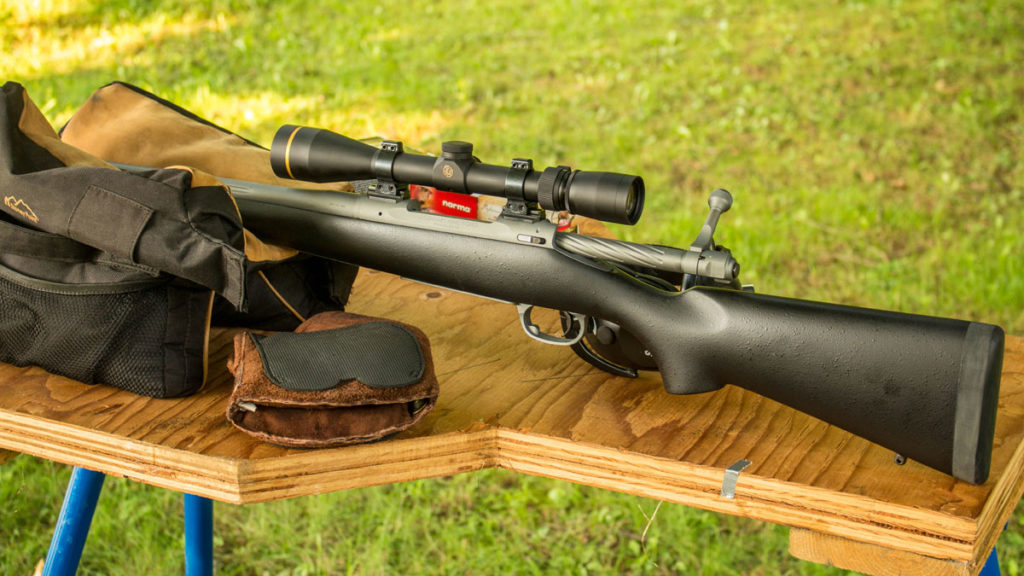 The Professional II at the bench. The stock fit made the magnum recoil easy to handle.

For ammunition, I brought along some of my favorite factory loads and a couple of my own proven handloads. From the factories, I had the Norma EcoStrike 150-grain load and the TipStrike 170-grain load, the Fusion 165-grain load and the Nosler Trophy Grade ammo with the excellent 190-grain AccuBond Long Range bullet. From my own handloads, I chose a well-proven load built around the 180-grain Swift Scirocco II over good old IMR4350, and another using the Federal Trophy Bonded Tip 180-grain bullet over the new IMR 8133. I’m pleased to report that the LAW Professional II gave more than acceptable results, with both factory and handloaded ammunition. The Fusion stuff gave the widest group, at 1.25”, yet was still an acceptable choice. The duo from Norma did a bit better, with EcoStrike printing 1.0” groups, and the Tip Strike running at about 0.9” at 100 yards. Nosler’s 190-grain ABLR gave the best precision, with three shots in ¾”; this will make an excellent choice for longer ranges, especially for distant elk or moose. The Professional II came into its own with the handloaded ammunition though; with my 180-grain Scirocco load running at 2,950 fps, printing ¾” groups and the 180 Trophy Bonded Tip load – at 2,980 fps – printing just over ½” groups. Obviously, not all folks will handload their ammunition, and I wouldn’t hesitate to hunt with the factory ammo, but it showed me that the Professional II has the potential to be a great all-around rifle. With bullet weights ranging between 150 and 190 grains, there aren’t too many species you’d comfortably pursue with a .300 Winchester that wouldn’t be cleanly taken with a properly placed shot. Like most .300s, it showed a definite preference for bullets with a longer bearing surface. 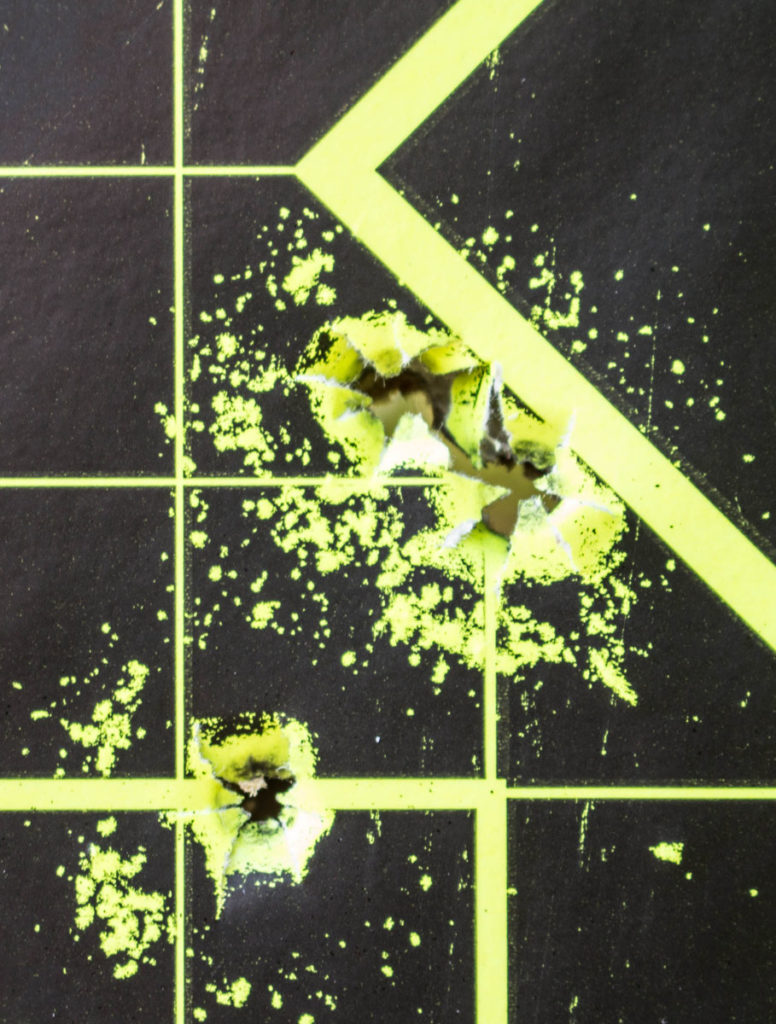 The worst group out of the Professional II was still capable of hunting out to sane ranges. 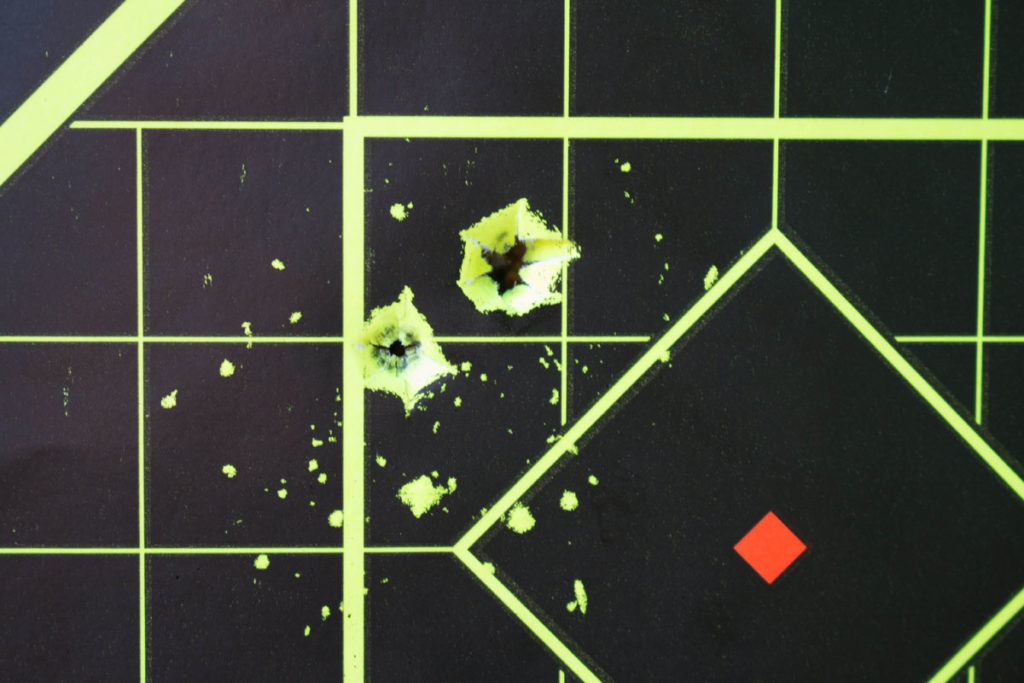 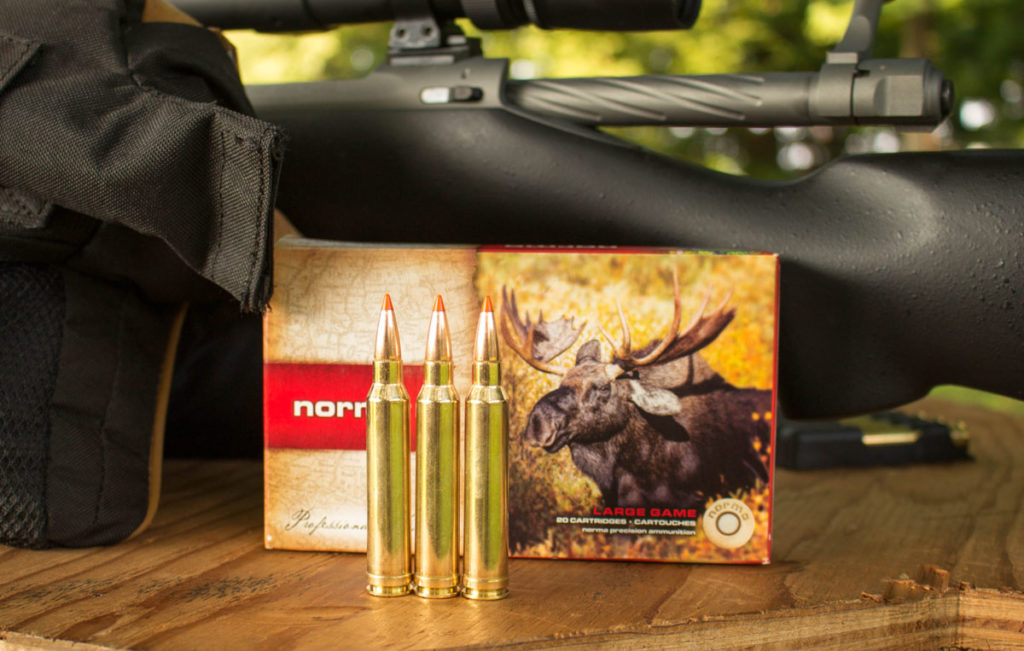 What won’t it do?

The LAW Professional II is built to be a hunting rifle, and with that in mind, you must understand that weight and portability are definitely a concern. If you’re looking for a rifle to ring steel out past 1,000 yards, well, there are target rifles for that, with heavier barrels and stocks designed specifically for prone/bench shooting. The .300 Winchester cartridge is fully capable of giving that performance, but the LAW was bred for the hunting fields. The fiberglass stock is trim, strong and very comfortable from any field position, and the Cerakote finish will giggle at snow, rain, sleet and anything else Mother Nature can muster. The fluted barrel helps to reduce weight and dissipate heat, and that M704 action is a design I feel is superior to any push-feed, with regard to a stressful hunting situation. Weighing in at 8.2 lbs–scoped but unloaded–the Professional II makes strikes a great balance of portability and comfort, being a pleasure to carry up a steep mountain or spend the day on the tracks of kudu bull, yet is properly balanced so as to settle down for an accurate shot. While I completely understand the benefits of an ultralight rifle, I despise a rifle that is too light to settle down for the shot and don’t mind a bit more weight forward to resolve that issue, especially on shots past 250 yards. That said, I find the proportions of the Professional II to be ideal for almost any hunting situation, from mountaintop to deer stand. 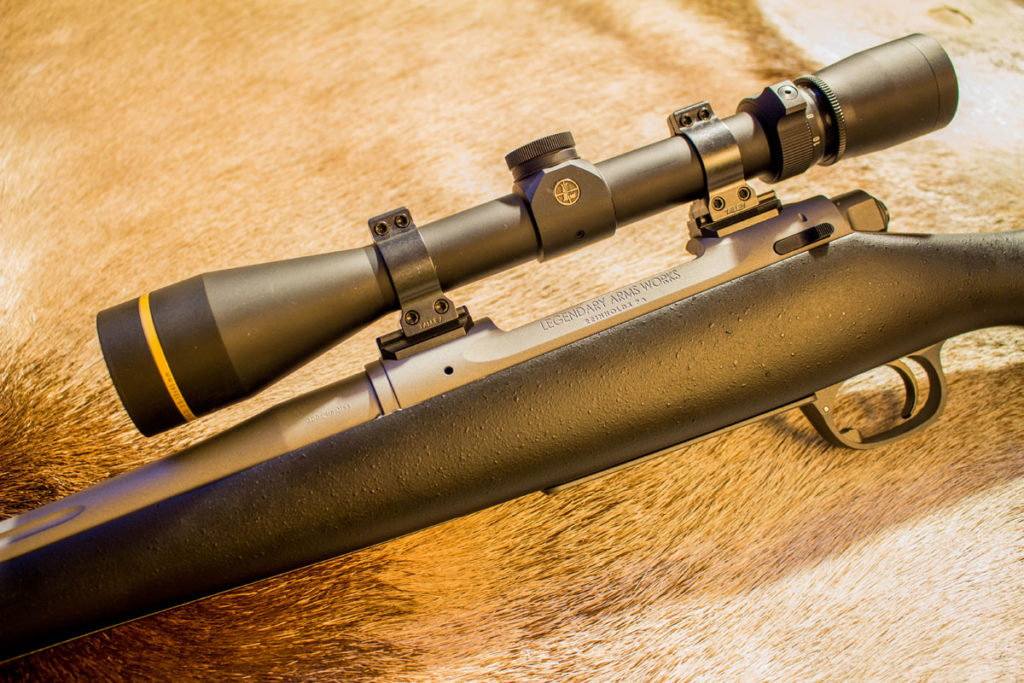 For a hunter who wants a dependable rifle that will give excellent accuracy, the Professional II from Legendary Arms Works should be high on the list of contenders.

I’ve had the pleasure of spending time with Todd Librandi, the new President of Legendary Arms Works. Despite some setbacks before Todd came onboard, he is a passionate gentleman who firmly believes in his product. “I’ve worked tirelessly to improve and guarantee to give our customers the best quality and most competitive firearm on the market,” Librandi relates. And that market is one which is flooded with good choices, with a ton of competition. As hunters and shooters, I’m not sure we’ve ever had the wide selection of quality rifles available to us. I can say this: while I use and appreciate many different rifles, I wouldn’t hesitate to take the Professional II on any hunt.