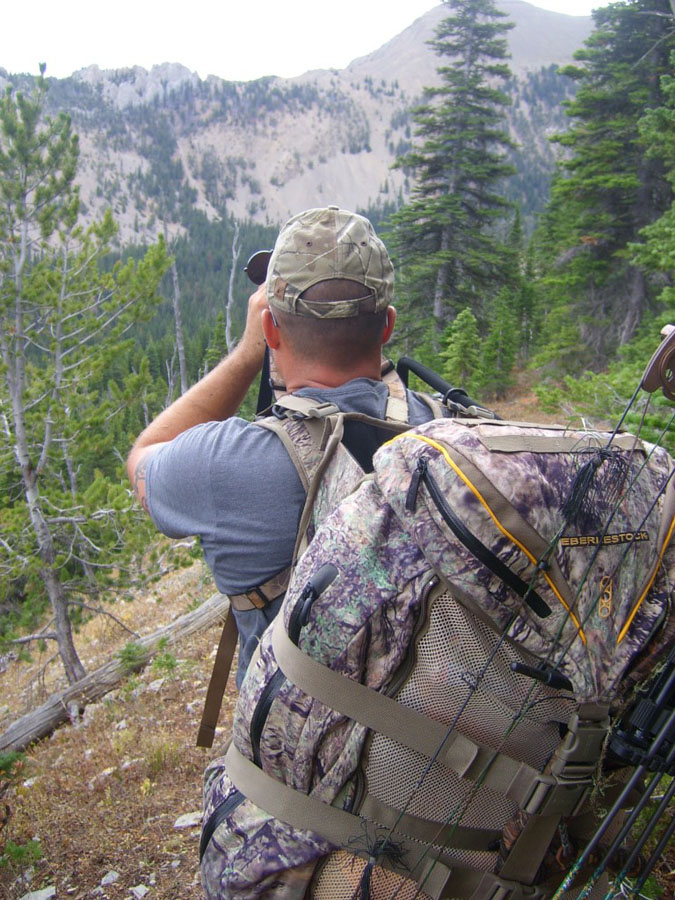 Warm weather hunting can be enjoyable but requires forethought and planning when an animal is harvested.

As hunters, we all have our own reasons as to why we enjoy what we do. Some people like the challenge of hunting mature animals on their own turf, some like the camaraderie with their friends and just being out in Mother Nature. One of the biggest reasons we take to the field every year is the opportunity to gather some of the best, organic, free-range meat available to the public. People in metropolitan areas pay big bucks for a slab of steak that qualifies as organic, but with some planning and a couple of hunting tags in their pocket, hunters like to get out there and get their own. 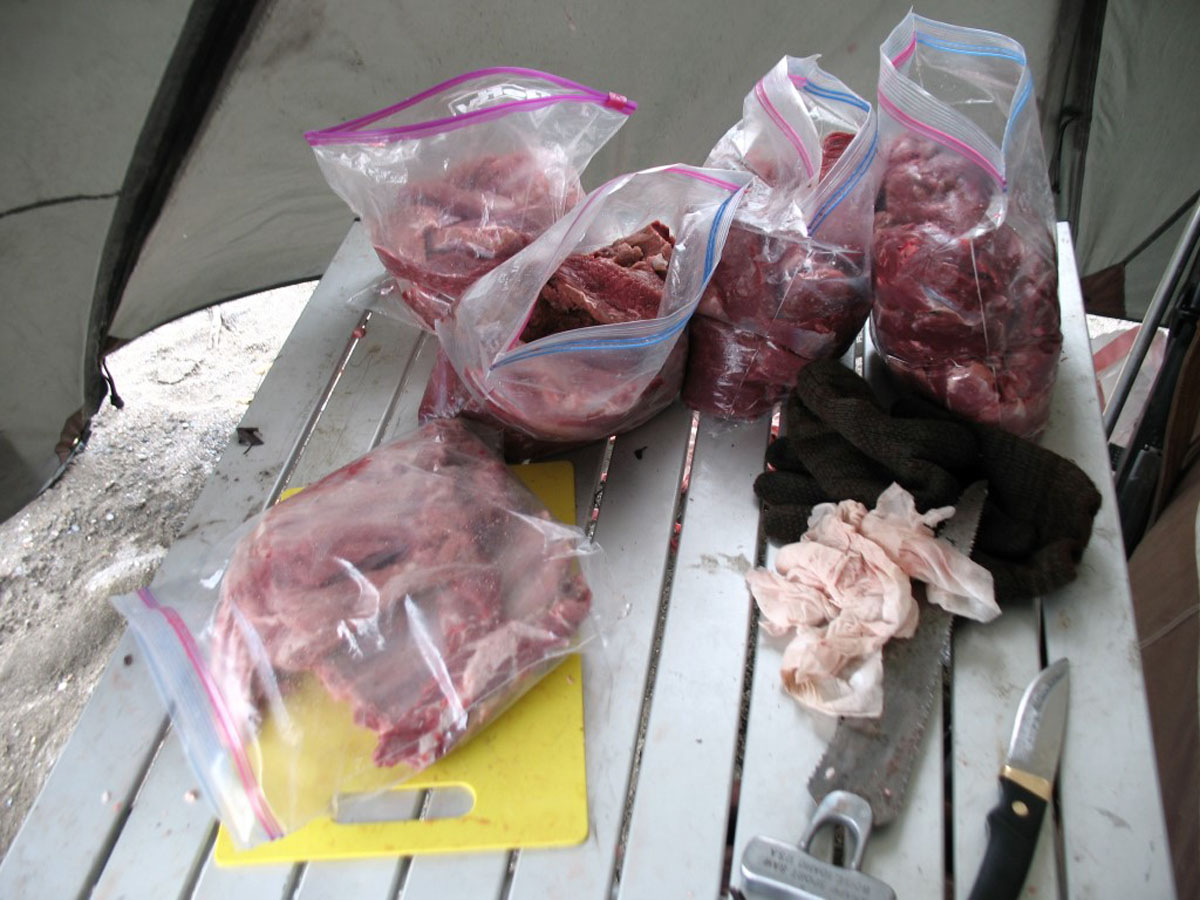 A batch of venison that has been cooled and is being prepared for the freezer.

There is a lot of planning that goes into a successful hunt, from permits applied for months in advance to researching new areas to expand one’s opportunities at a new species. One area of the hunt that needs as much or more planning than the others is how to take care of the animal after a hunter has been successful. We owe it to the animal as well as each other as sportsmen to use the resource we have been given to the best of our ability. Planning ahead before game has been harvested will ensure a freezer full of some great tasting protein for the rest of the year.

The first variable that needs to be planned for is the weather in which you will be hunting. Here in Montana we can bowhunt antelope in August. While this creates a great opportunity to get a jump on traditional fall hunting, it also means a unique challenge as far as meat care is concerned. Day time temperatures can be anywhere in the 80-90 degree range and a hunter needs to have taken this into account before he punches his tag. If you are a hunter who prefers to process his own game, an option when hunting in this warm of weather is to have a cooler full of frozen milk jugs or something similar to put boned out meat on as soon as possible to start the cooling process. If you are hunting close to home, it pays to have talked to a meat processor already and make sure they are taking game and prepared ahead of time so they are ready for you when you have been successful.

When it’s warm out, time is of the essence and trying to figure out how to take care of venison once it’s been harvested is a recipe for disaster. 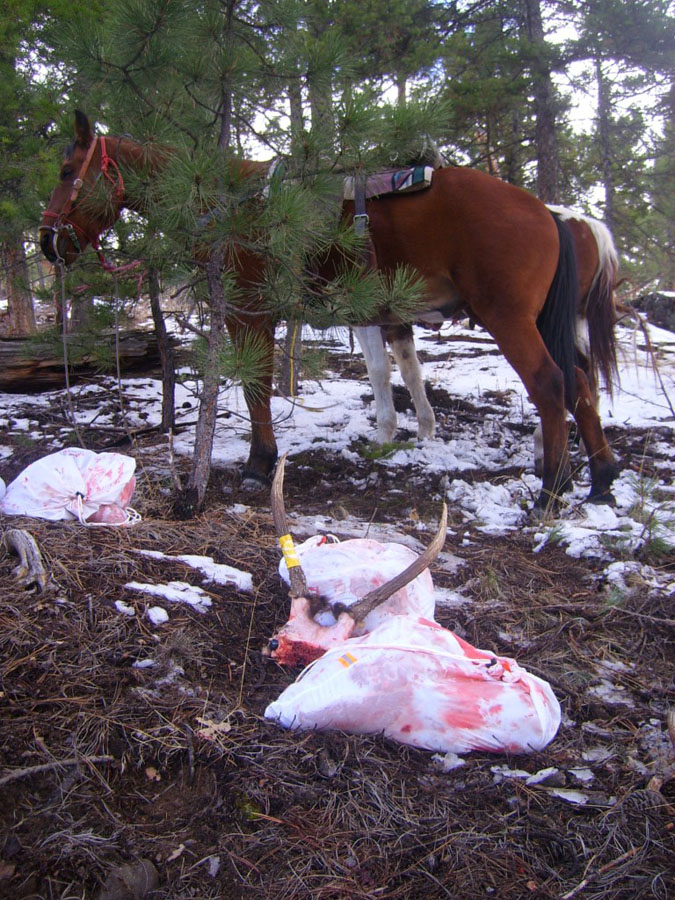 A spike bull boned out and ready for packing.

As summer turns into fall and the mornings and evenings get a chill in the air, it provides hunters with a little more leeway as to options for their game meat. Getting an animal opened up or quartered will start the cooling process before you get the game on ice or to the processor. But if the day starts to warm up, the meat will stop cooling and hunters need to have a plan in place to safeguard their venison.

When fall has made its appearance across the West, the daytime temperatures are usually more conducive to getting your animal taken care of as long as you pay attention and do your part. During rifle season in the mountain states, fall is usually in full swing and getting meat cooled is much easier than in previous months.

The time of day the game was harvested and your mode to get the meat back to a vehicle will determine how best to prepare the animal. Several options exist for transporting your game, either by game cart, backpack or stock. If an animal is going to be transported whole, simply peel the hide back from the biggest muscle groups such as the hind quarters and neck to promote the cooling process yet keep the meat clean. Split the pelvis at the hip joints with a knife and open up the chest cavity to allow air flow.

When a hunter is going to be doing the bulk of the labor, such as backpacking the meat out, it pays to leave everything at the kill site that won’t be put to use or needs to be legally carried out. With a little practice, a carcass can be boned out and cleaned up in no time at all, shaving valuable pounds off of your pack. Some hunting districts don’t allow boning meat in the field so be sure to be familiar with your state’s or area’s regulations.

Another option that comes into play is to quarter the animal, leaving just the rib cage and entrails behind. This is a great way to transport meat if you have pack animals or a game cart. I have quartered mature elk and taken all of the meat in one trip with a person on either end of the cart. Leaving the bone in the quarters provides some rigidity to the load when you have plenty of muscle to handle it. 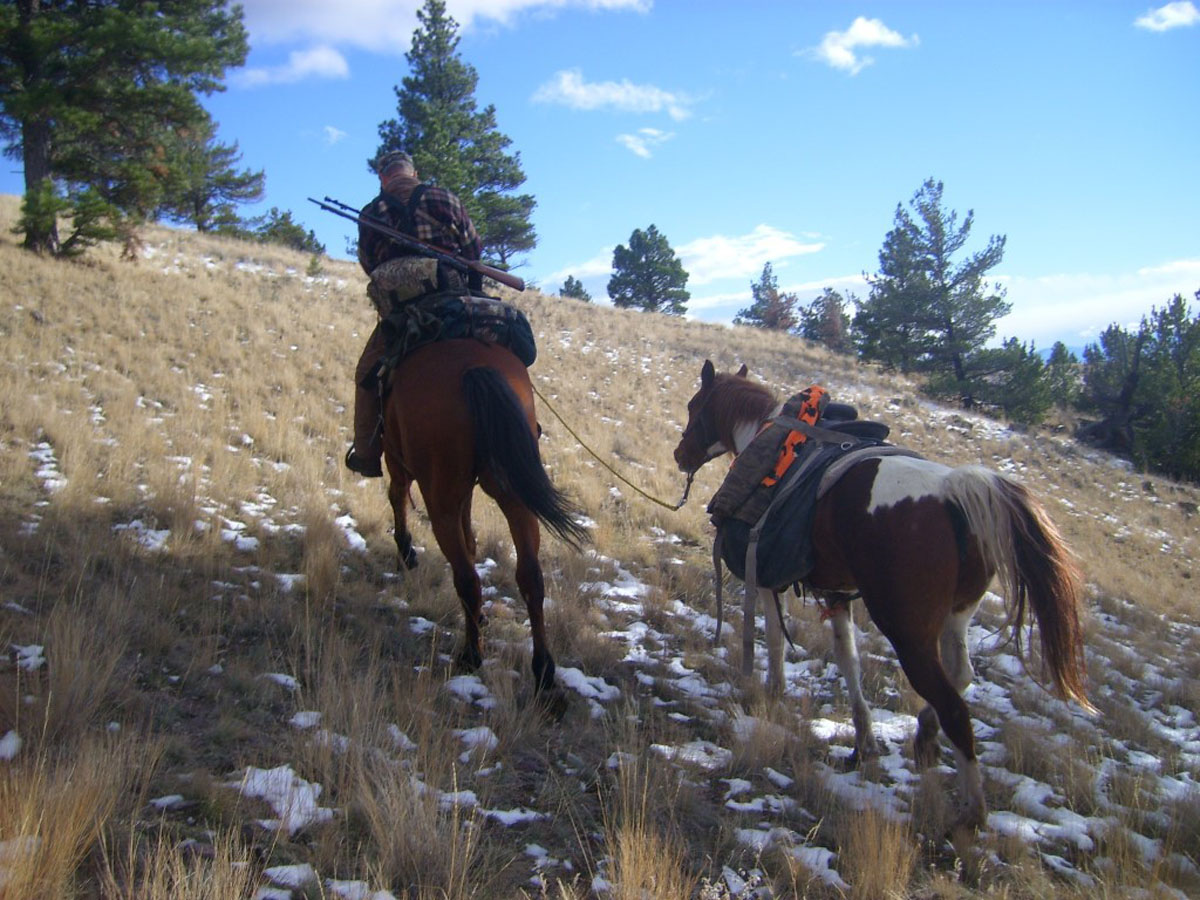 A load of meat headed for the pickup.

If an animal is harvested during the last part of the day when you know you will have to come back for it, you can either quarter or bone it out and put it in game bags or open the carcass like described earlier. It is important to get air circulation around the meat to cool it, even on those cold fall days so find a way to get it off the ground somehow. Hang it in a tree if available or even lay full game bags over sagebrush or bushes. If you are going to leave the meat on the carcass, put a couple of sticks or logs under the hips and shoulders, the ground acts as insulation and can keep the meat warm for longer than you would expect, even in below freezing temperatures. Again, air circulation is of utmost importance. 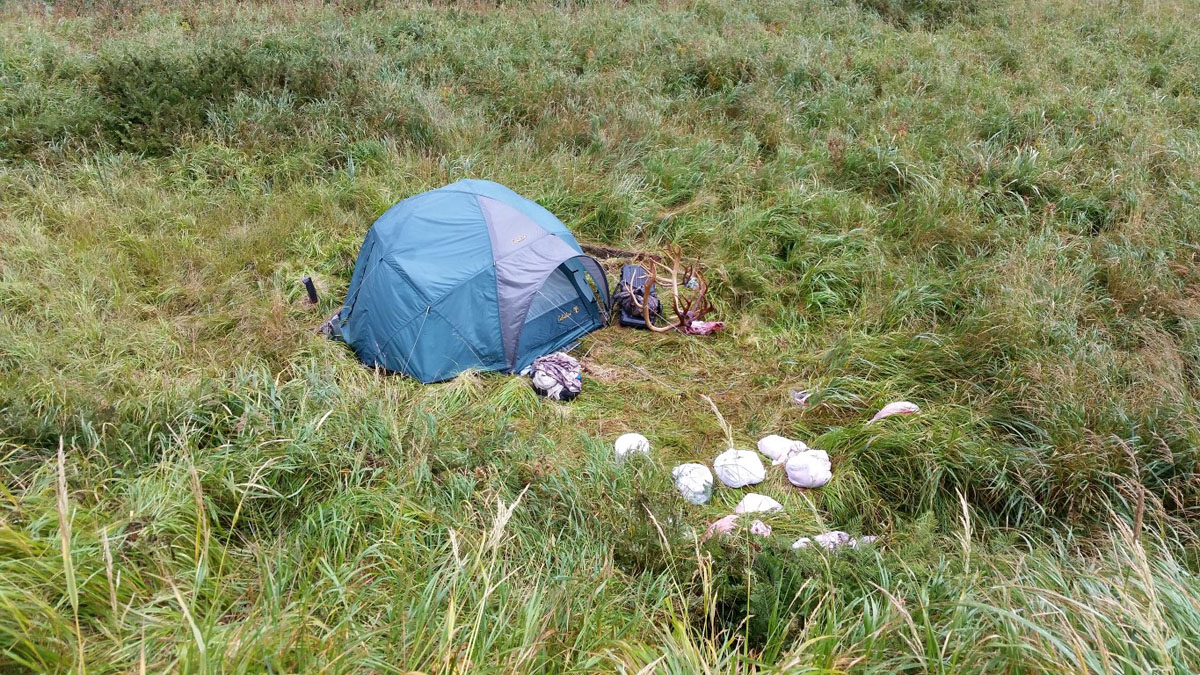 The author and his father packed three caribou in a day and a half back to camp by boning out the bulls and taking what could be used legally and ethically.

Now that you’ve gone through all of that hard work and all that’s left is to get the venison to a vehicle, it would be a shame to have a coyote or other wildlife help themselves to it overnight. Obviously a kill site is full of appetizing scents for opportunistic animals so I like to leave some scent that will give them a reason to not come exploring. A sweaty undershirt or two or anything that has soaked up some less-than-appealing human odor can be tied to antlers or left next to the carcass. I have done this several times with elk in heavy coyote country and always had good luck with keeping the meat coyote-free.

Venison is one of, if not the biggest, benefits we outdoorsmen and women get to enjoy, and it needs to be treated and prepared as such. With some forethought and preparation, hunters can responsibly harvest game throughout the year and reap the rewards of a successful hunt. 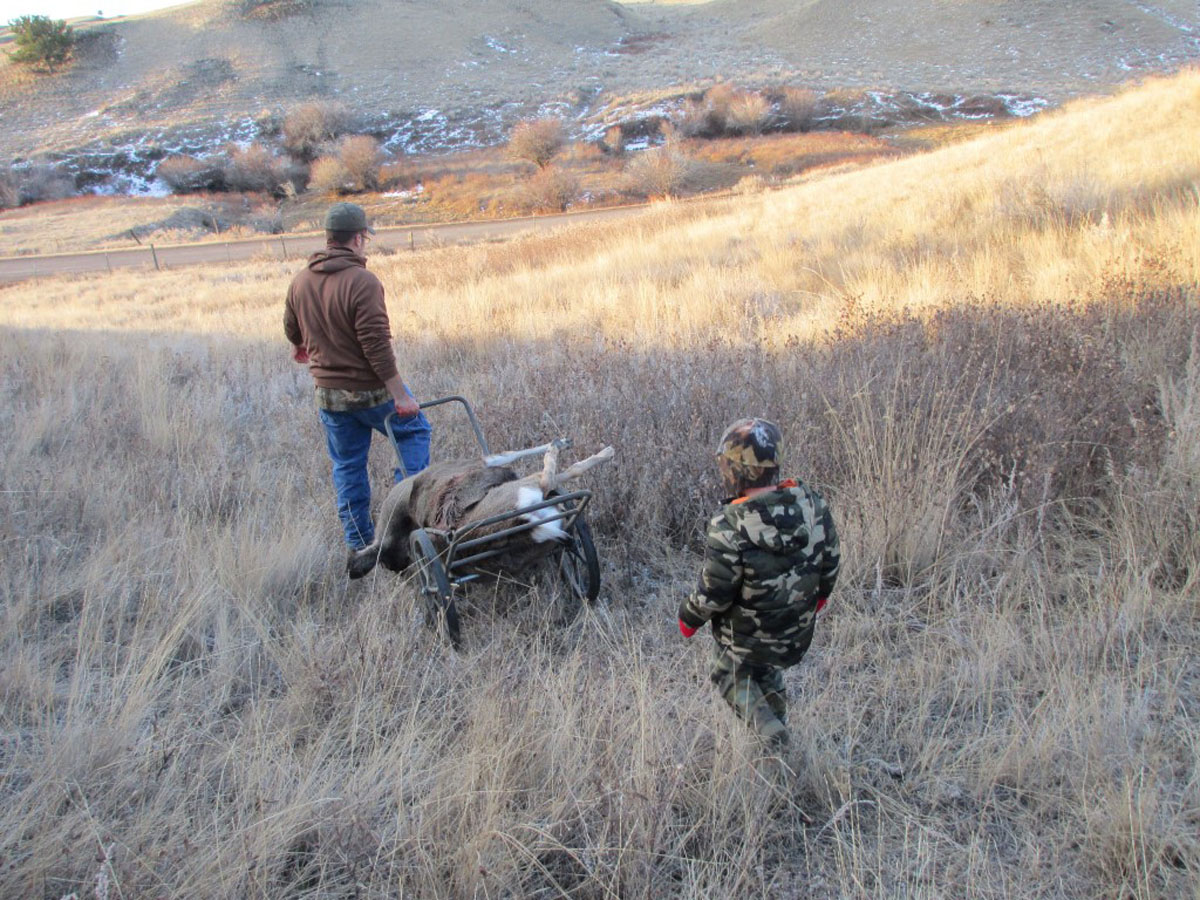 The author and his son use a game cart to get a mule deer to the pickup and ready for processing into great tasting venison.

Gear up for your next hunt at GunsAmerica!