I drew a premium deer tag in Colorado this year, which just so happened to coincide with the mule deer rut. I had seen many advertisements for the Ultimate Predator decoy on television and social media and believed that this tag would be the perfect opportunity to see if the product was all that it was cracked up to be. This tag was an archery-only season and it was located east of the Rockies, which means that there is not a lot of cover to hide behind and it can be quite the challenge to get within 50-60 yards of a deer without them knowing about it.

I ordered the Mule Deer decoy directly from the company; they offer several different kinds of decoys for everything from turkey to moose and everything in between. The cost of the decoy is $79.99, so I figured even if it didn’t work I wouldn’t be out that much. The product arrived very quickly; it was on my porch three days after I ordered it.

It comes in a simple package with instructions. It is a cloth decoy that is sewed around an expandable frame. The frame collapses into a small circle which makes the decoy easy to pack. It is very lightweight. I found that, as with most of the expanding decoys, it is very hard to get it back to the original shape once it has been expanded. It always seems that you can never get it as compact as it was when it arrived. Regardless I could manage to get it to fold down small enough to fit into a small daypack that I wear when hunting. 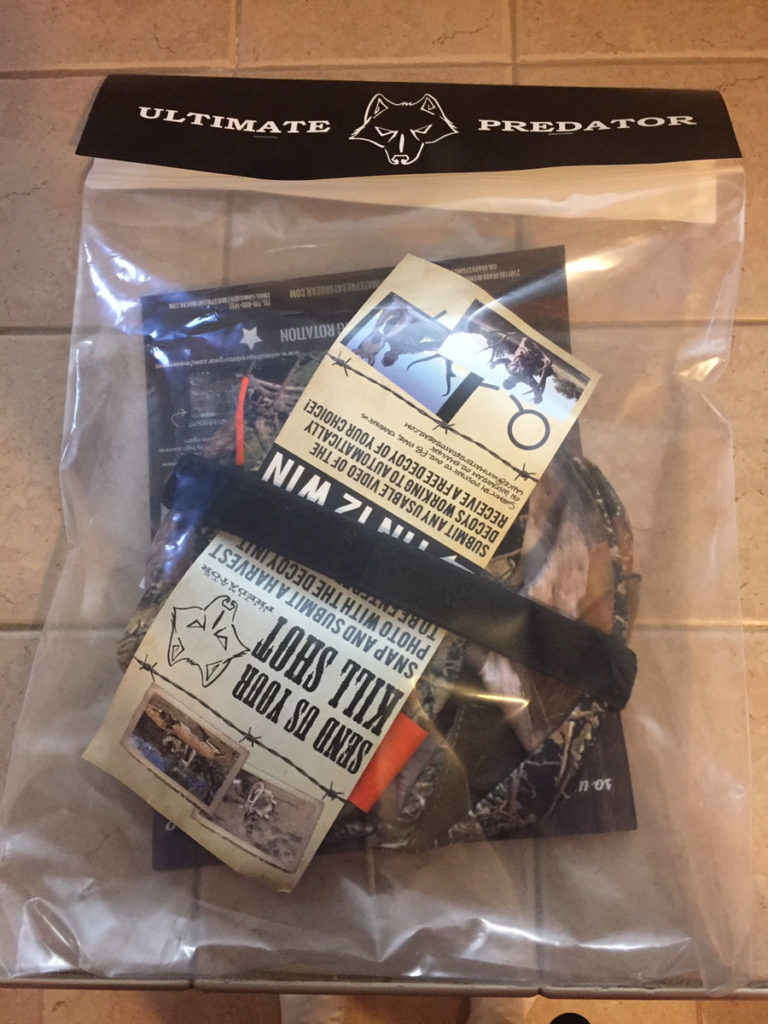 The Decoy comes in a neat small package, complete with the instructions for use and how to refold it back into a small circle. 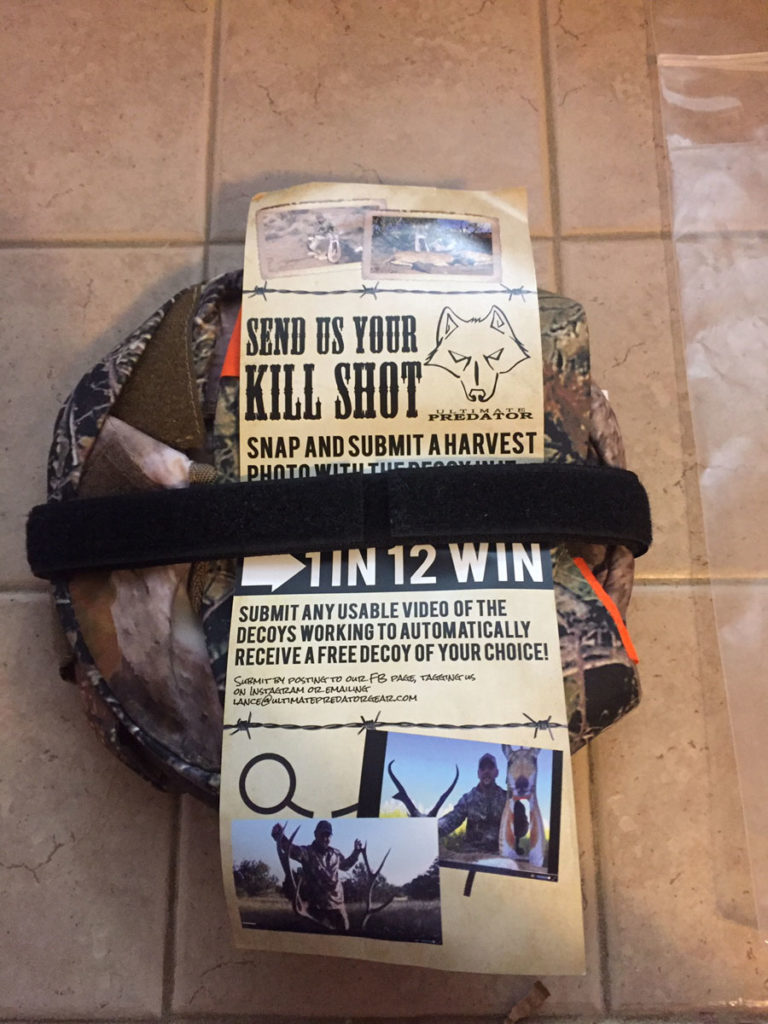 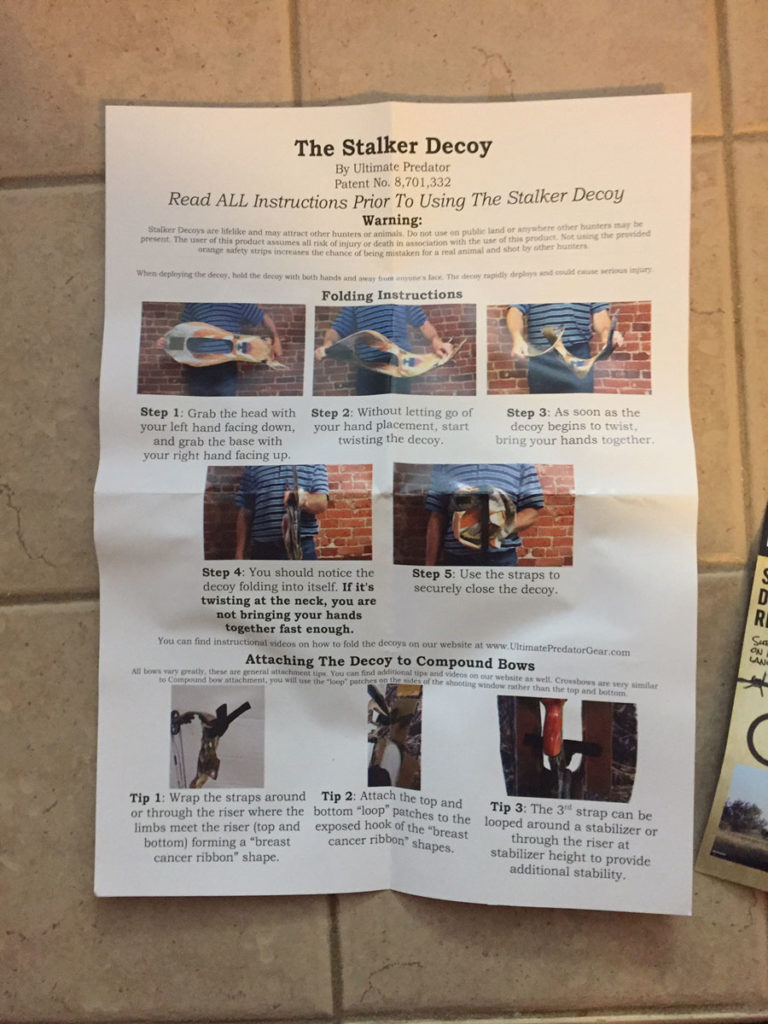 The Decoy is affixed to the bow using Velcro. The company gives you small strips of Velcro about 8 inches long that you twist around the limbs of the bow and attach to the corresponding Velcro on the back of the decoy. I found that although they can be a little temperamental to figure out at first, this is a pretty good way to attach the decoy to the bow. I would recommend practicing with the decoy attached to the bow because it does add some weight and can affect how you shoot. 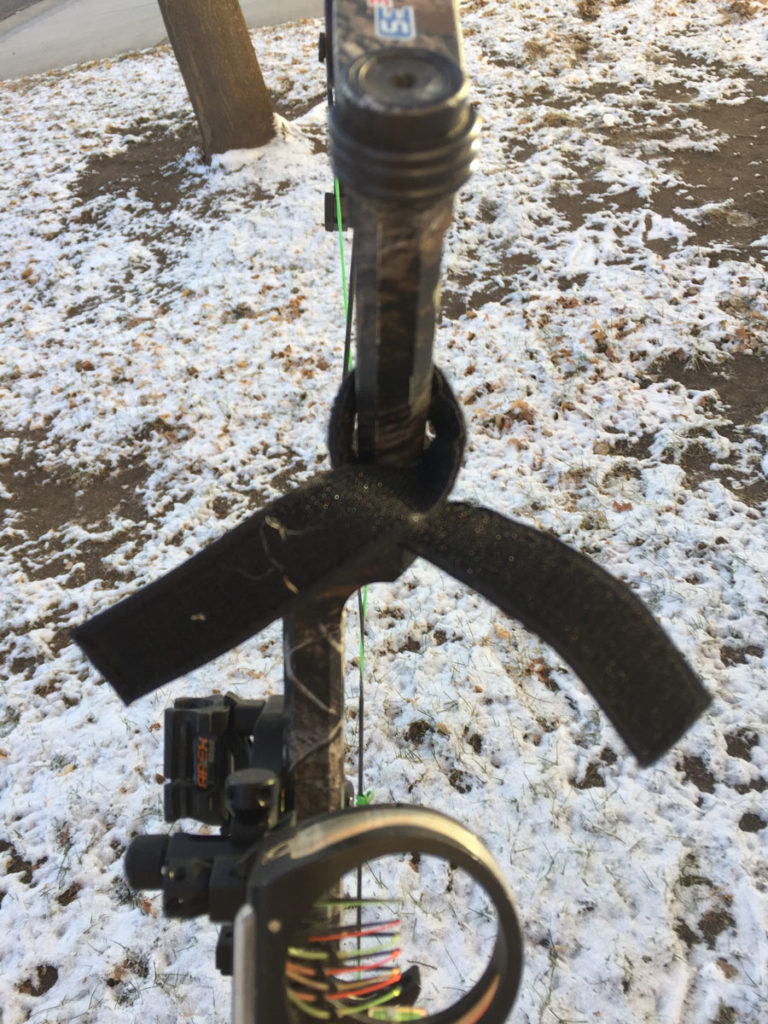 Velcro strap used to attach decoy to the bow. One goes on top of the bow and one goes toward the bottom.

The shooting window is located right in the middle of the decoy below the head. On my bow, the window was plenty big enough to allow me to have an unobstructed view through my peep sight to the pins, but I could see how this window could become an issue obstructing the top pins of a sight if the Velcro was not attached tightly.

I would also recommend that you tote the decoy in your backpack until you have a deer in mind to stalk. Although the decoy does obstruct the outline of a human, it is not convenient to carry attached to the bow. If you do not walk with it out in front of you the entire time, it will drag on the brush and makes some unnatural noise that can cause deer to spook. I also found the decoy to be difficult to use in the wind, which should be no surprise because it is essentially a deer-shaped kite on the front of your bow. 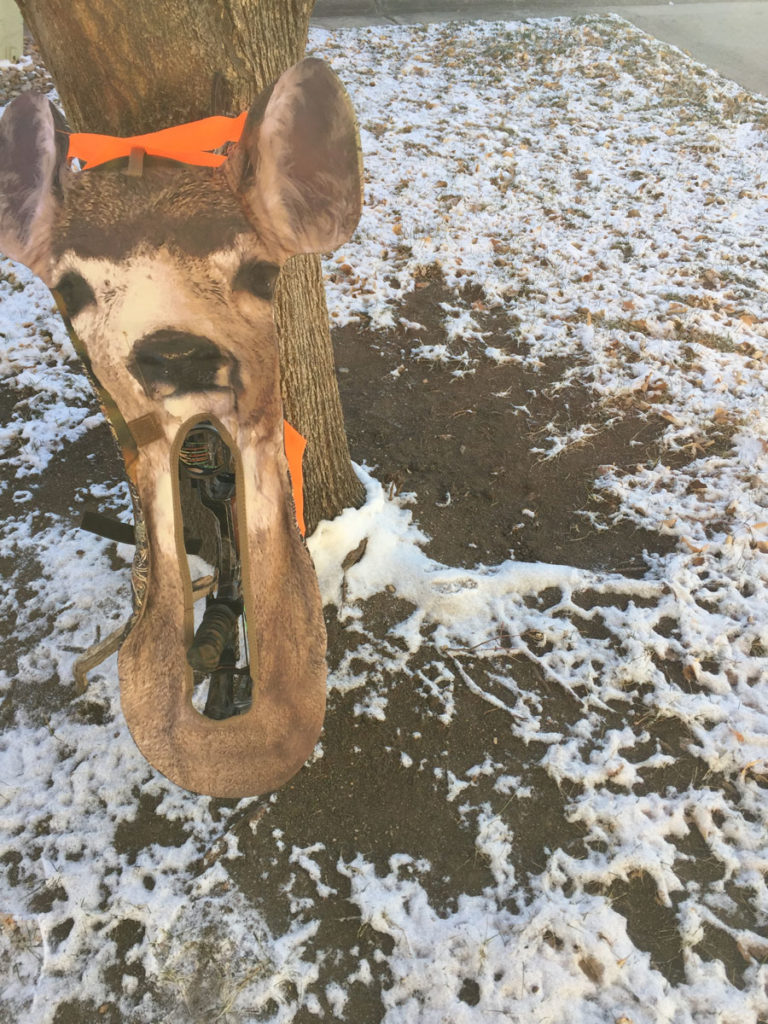 Decoy fully attached to the bow, provides a good amount of concealment.

As far as the animal’s reaction to the decoy is concerned I found them to be suspicious but not spooked. I attempted several stalks where I was able to get within 100 yards with no problem, but as I crept into the 70-80 range the deer became uneasy and skeptical. Although I never had a deer blow out on me or all out run off I would say that it is by no means a slam dunk for getting within bow range. I did find that the decoy was most effective in two specific situations. The first being obvious, which is a loan mature buck by himself looking for does. I was able to get to 56 yards on a very mature buck with the decoy, only to have the Velcro on my release fail and spook the deer. But up to that moment, the buck was very intrigued and not spooked at all. 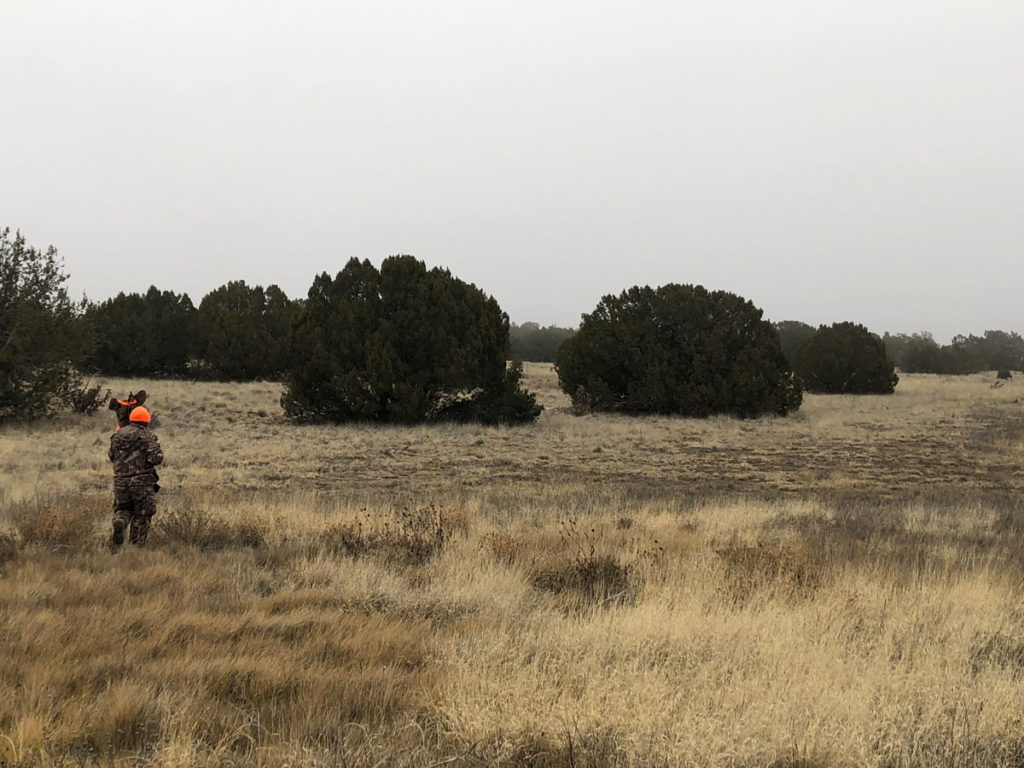 Myself attempting a stalk with the decoy on a group of deer, unsuccessfully.

The second situation where I found the decoy to be useful was in groups of 3-5 does that a buck is working. I was able to cut the distance to 44 yards to a group of 4 does with a nice buck in it, which I decided not to shoot. The does are the most skeptical of the decoy, as they are with everything, but I found that in a larger group the deer are much more willing to let you approach within bow range with the decoy before they feel uncomfortable.

All in all, I would not say that the decoy is not a slam dunk for shooting big deer, but I will say that it will at least give you a few extra seconds to get your bow back and have an opportunity at a shot. I think it is a good balance between lightweight and durable construction, but I do feel that at 79.99 it is a little expensive, but until we see a competitor offering something at a lower price it is the only and best option. At the end of the day, I would gladly give $80 to have a decent opportunity at a good deer.