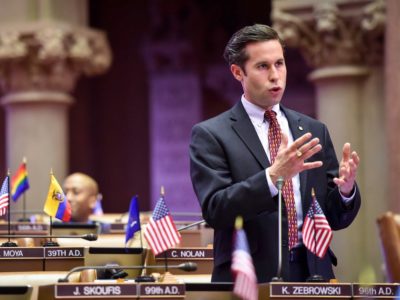 “These changes were based in part on studies which determined that this level of alcohol in an individual’s bloodstream can result in substantially impaired motor skills, perception and judgment,” Assemblyman Kenneth Zebrowski wrote in his sponsor’s memo. “These are also critical skills used in hunting.”

He identified several other states that recently set their intoxicated thresholds at 0.08 percent and claims that Connecticut and Pennsylvania have legislation pending to do the same.

“An individual who is too intoxicated to drive a car or pilot a boat is also unfit to engage in hunting and the increased risk is not only to the hunter, but to everyone else in the field,” Zebrowski, a Rockland County Democrat, wrote. “This bill would ensure a consistent standard for intoxication in state law.”

As much as responsible hunters support the safe, non-intoxicated practice of the sport, there doesn’t appear to be an epidemic of drunken hunting in New York. Officials say that conservation officers issue less than a dozen citations for hunting while intoxicated annually, which represents less than 0.002% of the nearly 600,000 hunters in the state.

Still, it’s tough to argue in favor of combining firearms and alcohol, and the measure passed the Assembly 147-1 and the Senate 56-5 without floor debates in either chamber. The bill now heads to Gov. Andrew Cuomo’s desk.

Hunting while intoxicated is a misdemeanor under New York’s conservation law and is punishable by up to a $500 fine and a year in jail and a two-year suspension of hunting licenses. Hunters can also lose their licenses for refusing to submit to a breath or other test for intoxication by conservation officers or police.

The most recent drunk hunting story to make headlines in New York occurred in 2016 when environmental conservation officers arrested a hunter for failing a field sobriety test while hunting geese in Franklin County.

The officers heard two hunters calling geese and observed them kill two birds after hunting hours had expired. When the hunters returned to their truck, the officers confirmed that neither had a valid hunting license, both had been consuming alcohol, and both were using shotguns capable of holding more than three shells.

Only one of them failed the sobriety test, however, and was charged with hunting while impaired by alcohol.