There is a revolution in hunting that is sweeping through the generations as a sickness. It is the sickness for distance, and it has created a new and sturdy market for precision long range shooting equipment and solidified existing company’s product rankings at the top of the game. Of these top companies, Nightforce has always held a position in these ranks. As it was announced, they have just released another product that will fall into an open niche: the ATACR 4-16×50 F1. This riflescope is a perfect balance of compact, lightweight (for what it is), unbreakable and of course, eye-grabbing goodness. This niche that this riflescope will fall into, as speculated by myself, is with the long range hunting community. Here, there is a demand for tough scopes that hold their zero in the harshest conditions that are also, perhaps contradictorily so, lightweight and compact so they can be carried around in a backpack or in a rifle scabbard and not be a burden to the guy or gal carrying it. Of course on the ideal long range hunting scope, there needs to be zero stop so one can easily return to zero under tense situations when the mind is wandering elsewhere. For easy shot corrections, a riflescope needs to have a reticle that makes holding MOA or Mil values easy as well. This is why it is important for a hunting optic to have a first focal plane reticle. And last, but definitely, not finally, there needs to be options to light the reticle in order to be seen at dawn and dusk when most animals are harvested and it may be hard to see a black reticle against the shadowy background. Of course, this new riflescope fulfills all of these requirements as if Nightforce has heard what the hunting community wants. It is probably safe to say that they have been listening and taking notes. 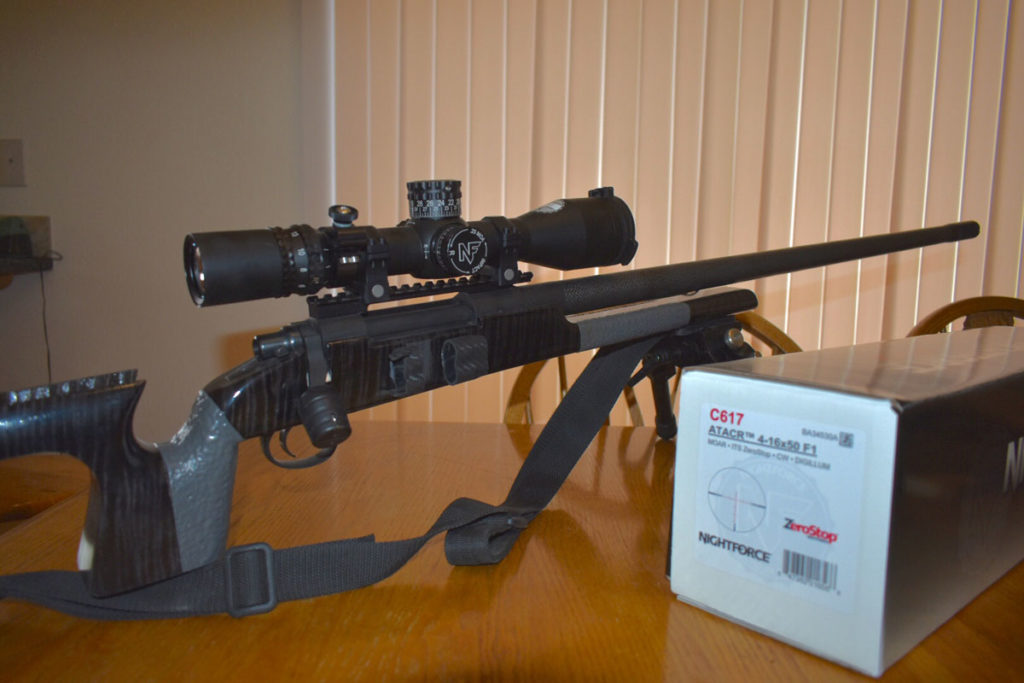 After unboxing the ATACR 4-16X50, it was immediately mounted to my custom 338 EDGE using Nightforce rings. Also, a Sideshot Scope cam mounting bracket was installed which can be seen near the eyepiece.

Once the package was opened, it was apparent that the optic came with a few extras that I did not assume it would arrive with. Included were objective and eyepiece flip up covers that were very high quality, a multi-tool for making adjustments on the optic, a throw lever knob to make changing the magnification quicker and easier and finally, a beautiful ring to cover the threads on the capped windage turret if you choose to run with it exposed. Immediately, I mounted the optic on my rifle and began to install the parts and pieces that I wanted in order to make it optimal for my own uses. 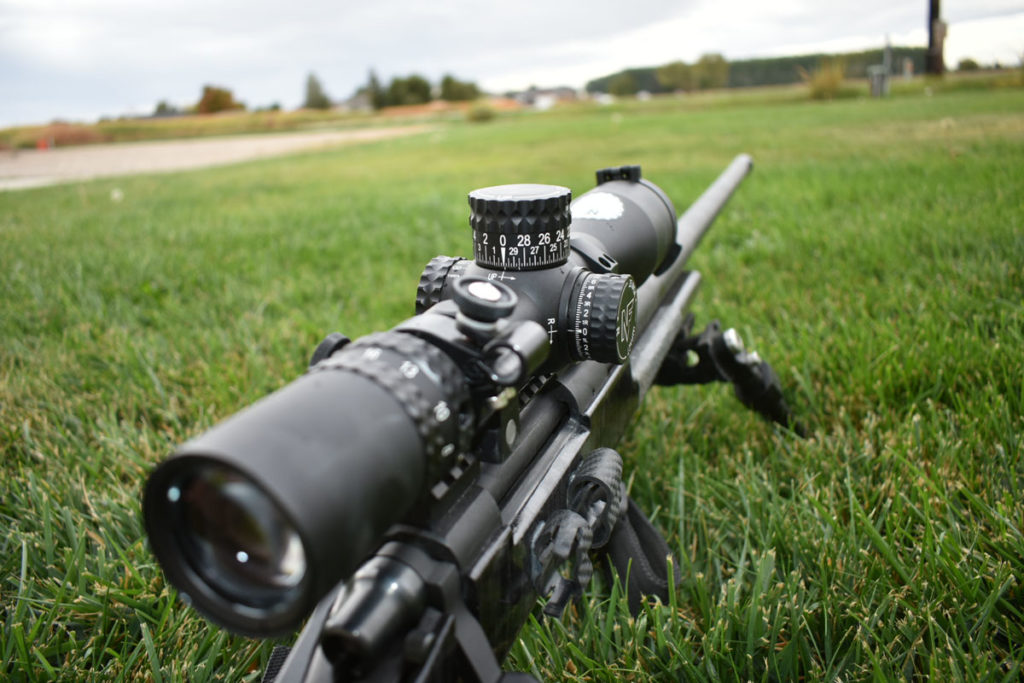 The eyepiece flip cap cover was removed to make it compatible with the Sideshot Scopecam. Windage turret was removed and the beauty ring was installed to protect the threads. As always, sharp edges and highly contrasting white lettering/numbering makes for a clean and crisp looking optic.

In an F2 reticle, which is the most common, when you change the magnification of your optic, the reticle does not change through this power range. This means that if you have a MOA or Mil scale on your reticle, it is only accurate on a specified magnification. For example; if I have a 4-20 magnification optic with a reticle that has hash-marks every 2 MOA, these will only measure an accurate 2 MOA on 20 power (based on the design of the optic.) But, if I am on 10 power, these hash-marks are now 4 MOA apart even though they may be marked as being spaced every 2. This may be a confusing thought, but it is worth slowing down and re-reading in order to understand. One reason these reticles are most popular may be due to their simpler construction, and they are lower priced. They are what your traditional hunter has been using for years. 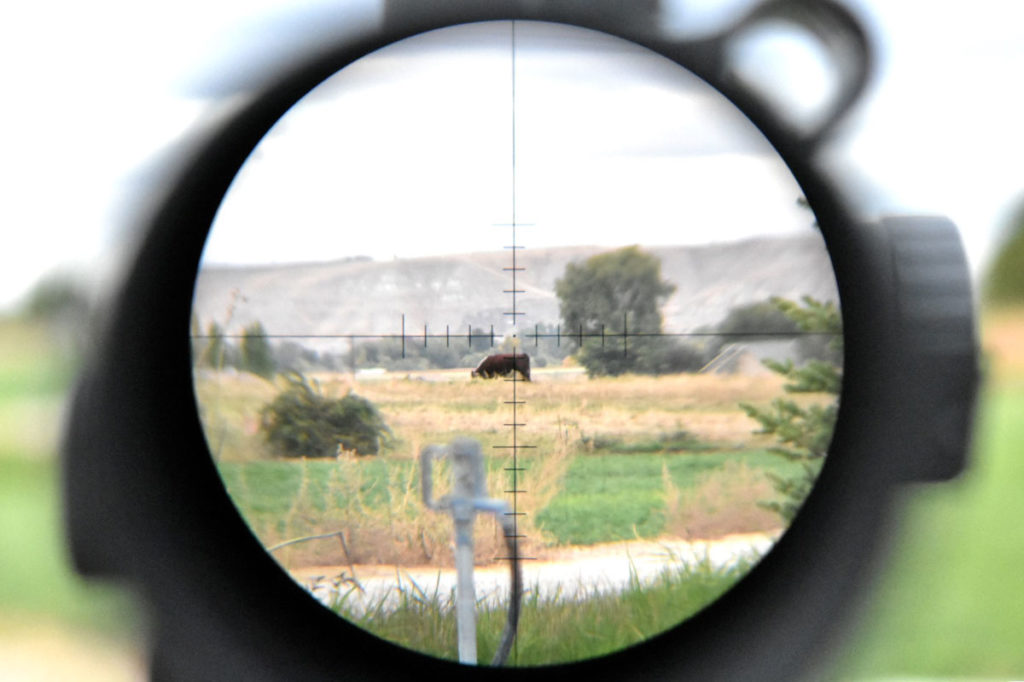 An example of an F2 rifle scope. When on 4 power, the reticle does not change appearance when compared to 12 power. This means that the reticle values are only accurate on one designated magnification. 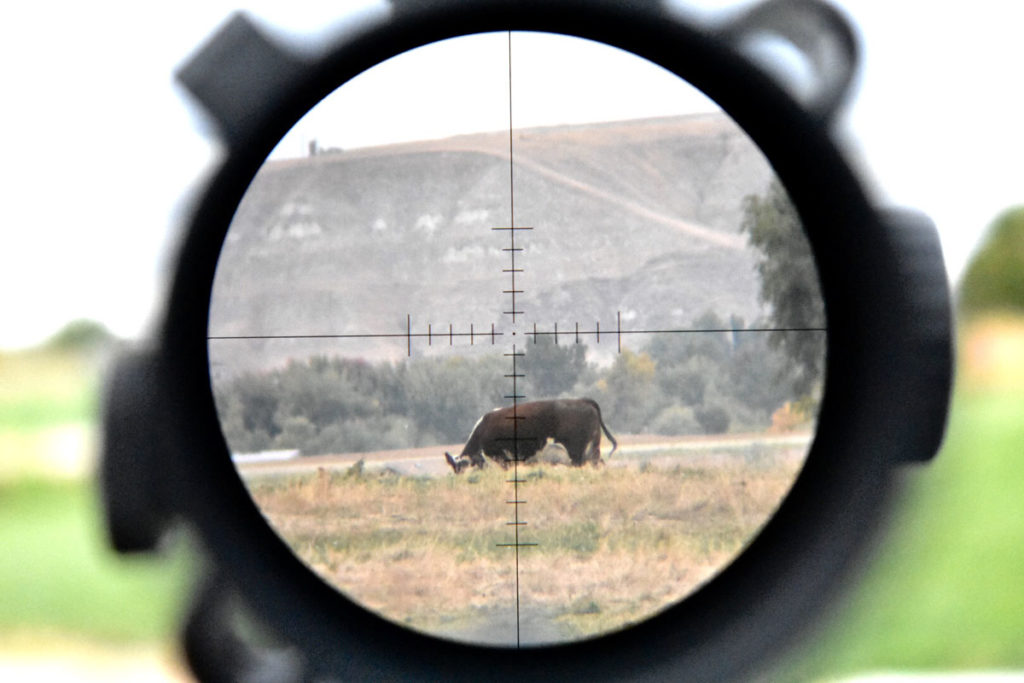 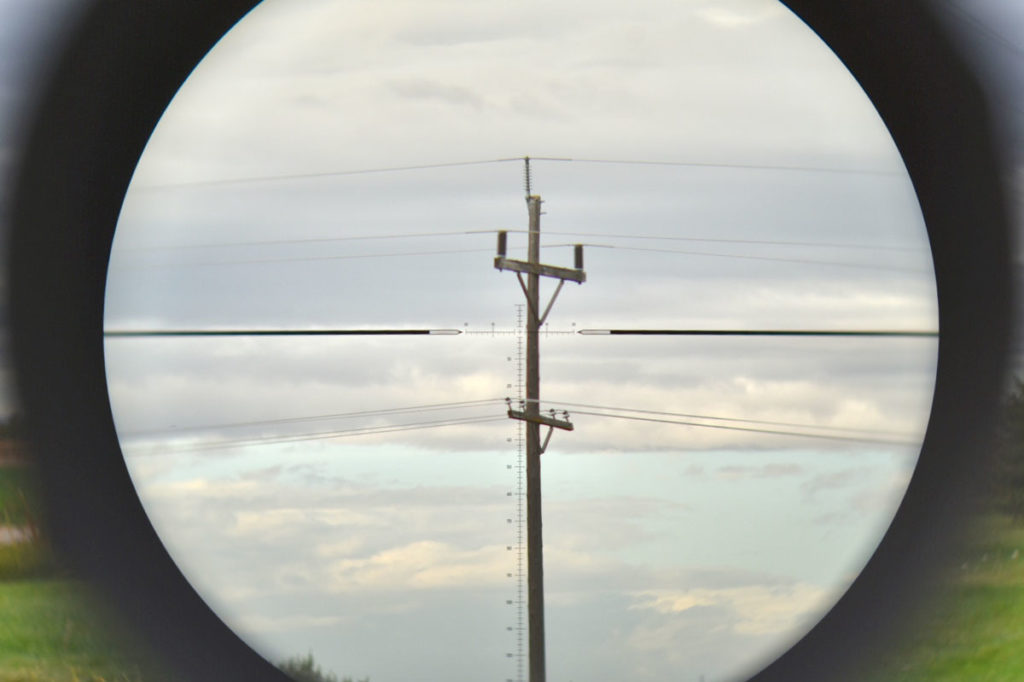 An example of an F1 rifle scope (ATACR 4-16×50 F1). When on 4 power, the reticle appears “smaller” than when on 12 power. This is because the reticle values remain constant across the magnification range. As always, the camera cannot depict an accurate representation of the clarity of this optic. 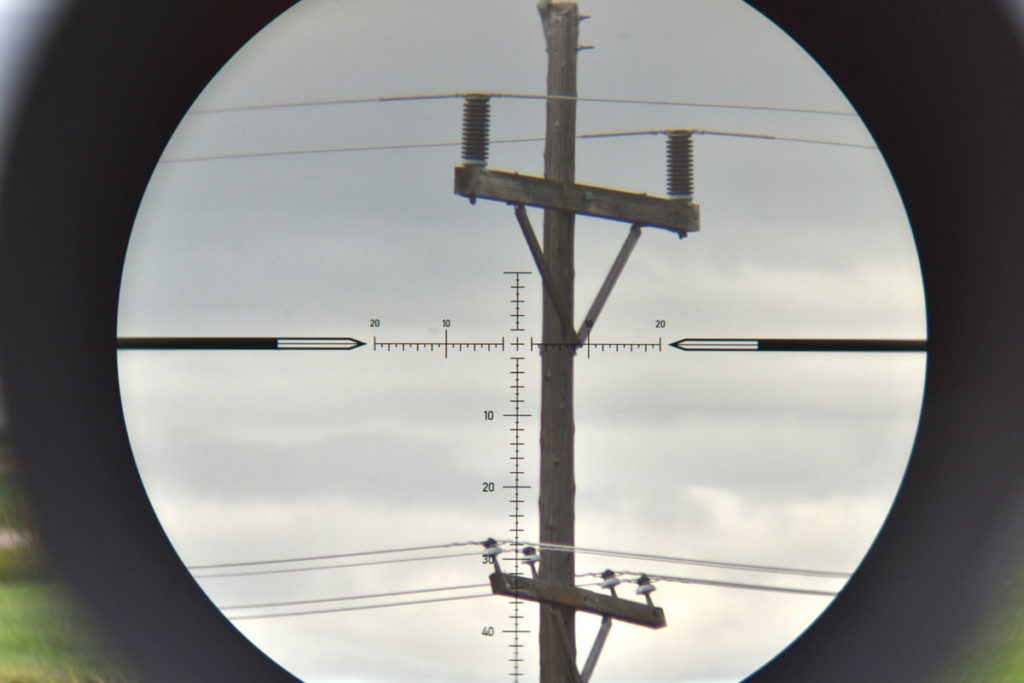 Because this optic is designed for long range hunting applications, it is imperative that it tracks precisely. By this, I am saying that when 15 MOA is dialed on the optic, it needs to actually move the reticle exactly 15 MOA. I ran a tall target test in order to test the ATACR 4-16×50 F1’s tracking accuracy. Quickly, a tall target test consists of marking up a target with a vertical line that has a point of aim at the bottom. This is then placed leveled down range. Next, a group is fired at the point of aim, a MOA value is dialed up and then another group is fired at the point of aim. The distance between the groups can be measured and compared to the value dialed to determine how close to 0.25 MOA each click on the optic really is. 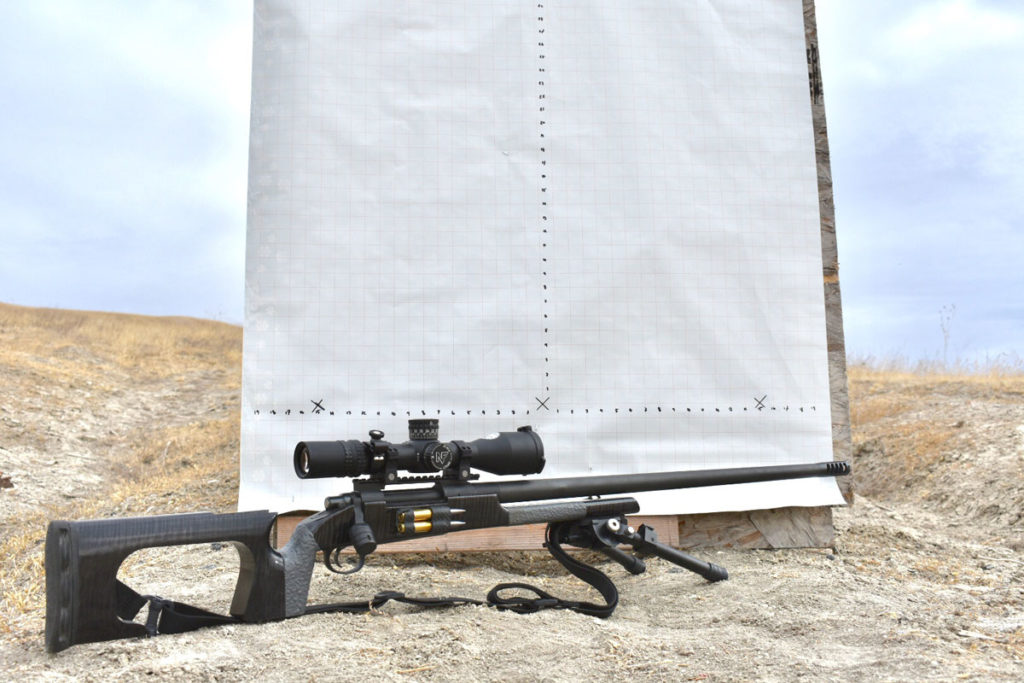 Preparing for a “tall target test.” This is performed to measure the precision with which this optic will track when dialing elevation. A similar test was performed with windage with equally impressive results.

In my test, I fired a 3 round group at the point of aim and hit 1 MOA below. When I then dialed up 30 MOA and fired a 3 round group, I hit 31 MOA up on the target. The measured distance between the groups was 32 inches exactly. This is not alarming because the distance I was shooting must be calculated in. Being 102 yards away, I determined that the scope tracked perfectly with the following formula, allowing for a degree of error due to my rifle. (the first group was abnormally large) 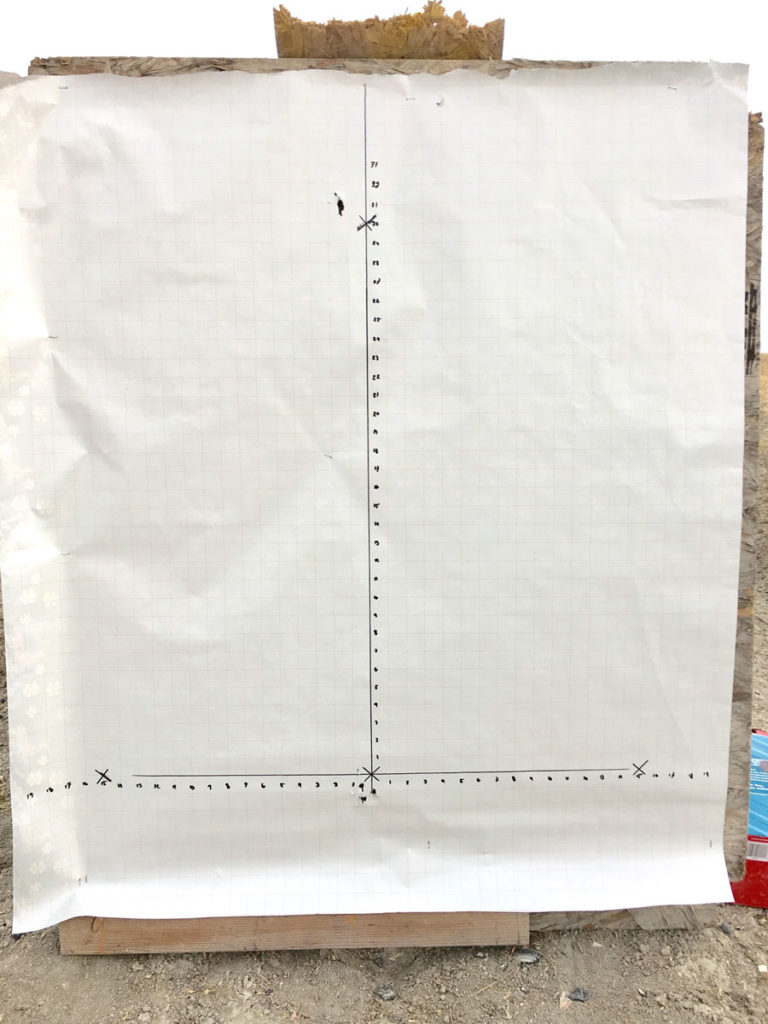 Naturally, this picture needs some explanation. This rifle is a “one hole gun” as can be seen in the top 3 shot grouping. The bottom group was fired early that morning when it was still cold and frosty. I believe the difference in group size can be attributed to the colder power temperature of the first group which lowered my velocities enough to knock me off of an accuracy node. The center of the bottom group to the top group was measured in the calculation.

After determining that the scope tracked precisely, I investigated the mechanics of the scope. Changing the illumination was intuitive and easy to do. There is a push button on the parallax knob that allows you to turn the illumination on and off as well as change the color and intensity. To change the battery, you just unscrew the cap on the parallax knob. I found that in the bright sunlight, I could not see the lighted reticle even on max setting, but in the evening I took it out and saw that it was rather helpful in low light. 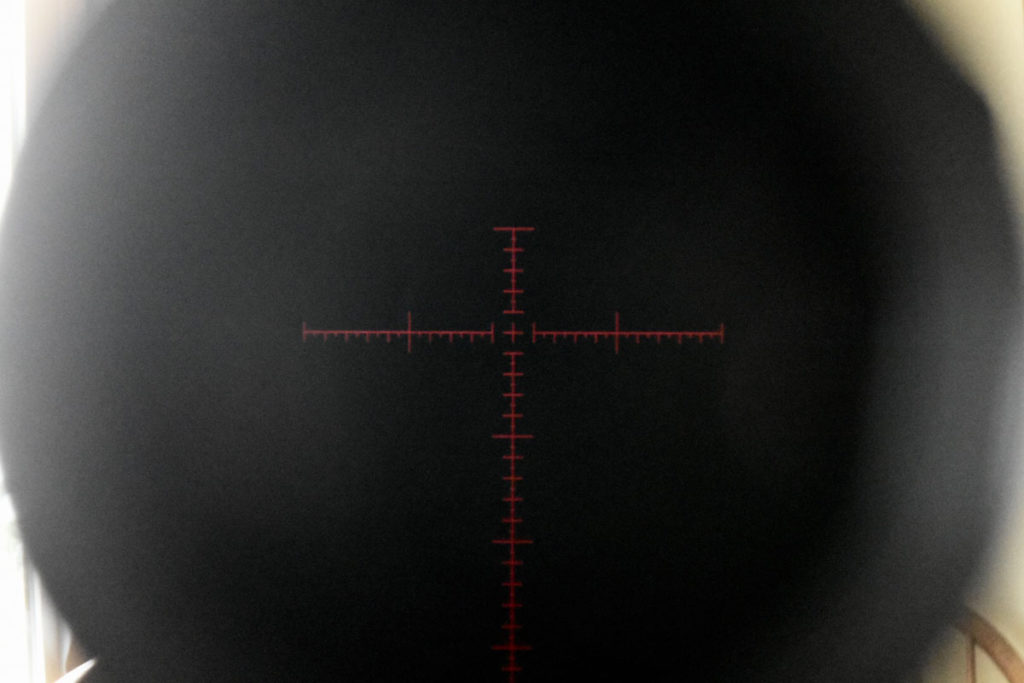 The illuminated reticle was easy to use and fulfilled its function, however, it was a bit dim for my own personal liking. In this picture, I shut the objective lens scope cap to better capture the illumination. 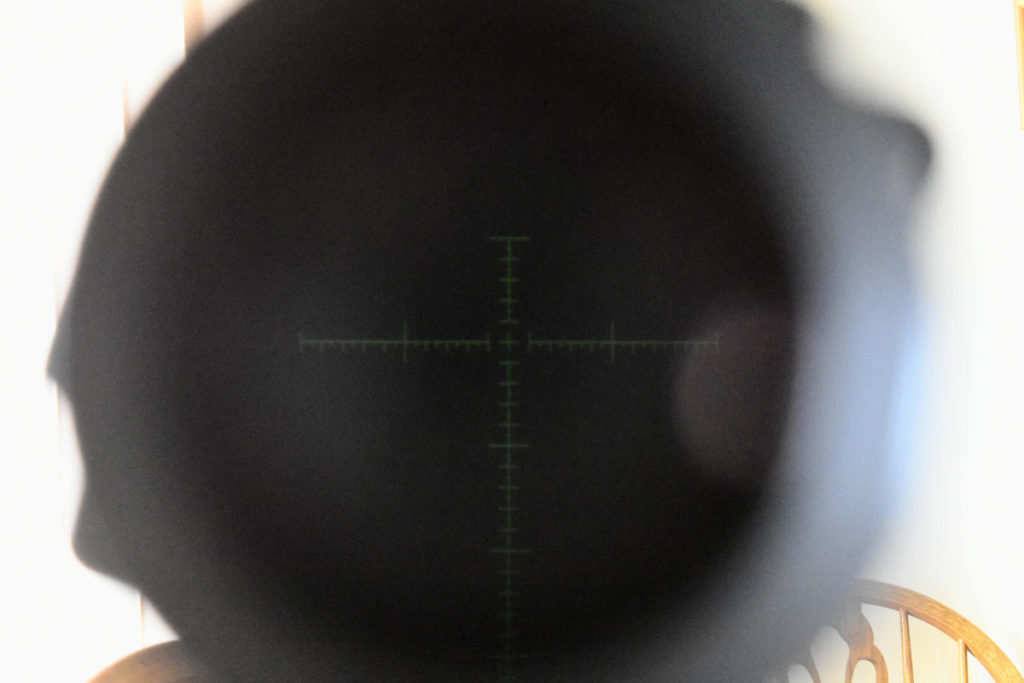 Setting the zero stop was also very easy to do. The instruction manual over describes how to do this, which I appreciated. I have had optics in the past that I still have not figured out how to properly set the zero stop, but this was not one of them. Basically, you remove the cap, loosen the set screws on the clutch and rotate and push it down to the second clutch where you hold it and re-tighten the set screws. Then you replace the cap and are ready to shoot.

Overall, I think it is obvious that I loved Nightforce’s new ATACR 4-16×50 F1 rifle scope, but I’ll say it again: I found this to be a great optic and experimentally determined it to be exceptionally precise and overbuilt as most Nightforce optics are. I would trust my life in the wilderness with it if I were hunting dangerous game and I would put my faith in it if I were shooting benchrest competitions. I also found the power range to be adequate for shooting large targets comfortably out to around 1500 yards, which is further than most people are capable of.  That said, I would elect to buy a higher powered optic if I were splitting hairs at 100 yards, but with more magnification comes more weight and length, which a hunter does not want.

The new ATACR 4-16×50 F1 features Nightforce’s ED glass and I found it to be exceptional and exactly what you’d expect in scope with a street price of around $2400.00 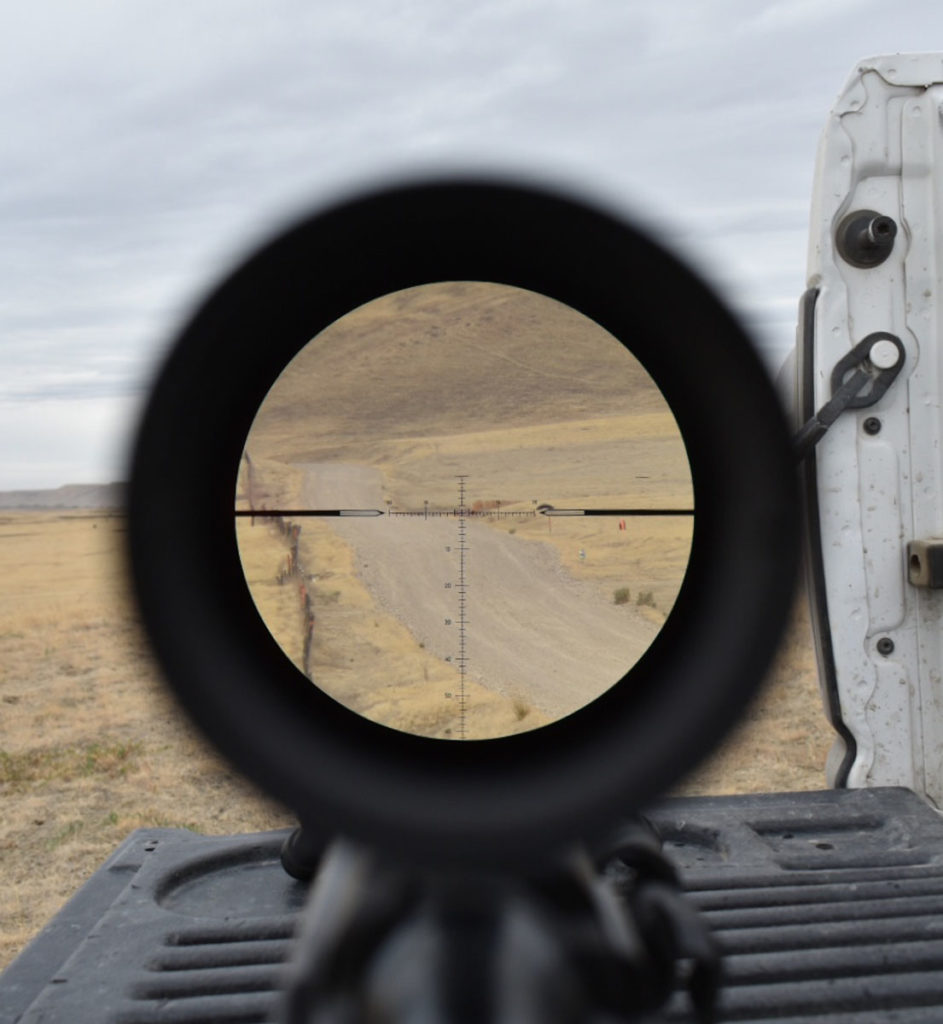 For reference, I found a 28” tall sign (approximately the kill zone on an elk and body size of a deer) and backed off to the furthest distance I would still be comfortable taking this shot due to the 16x magnification limitation. This is 1429 yards, which is well beyond what most people would actually take a shot while hunting. Again, the camera did not accurately capture the clarity of the ATACR 4-16×50 F1 optic.