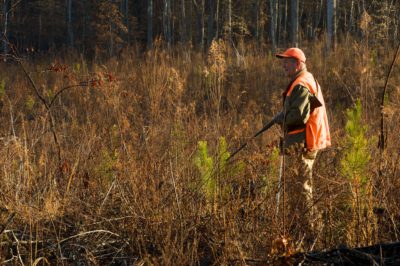 The right of the people to hunt, fish, and harvest wildlife is a valued part of the State’s heritage and shall be forever preserved for the public good. The people have a right, including the right to use traditional methods, to hunt, fish, and harvest wildlife, subject only to laws enacted by the General Assembly and rules adopted pursuant to authority granted by the General Assembly to promote wildlife conservation and management and preserve the future of hunting and fishing. Public hunting and fishing shall be a preferred means of managing and controlling wildlife. Nothing herein shall be construed to modify any provision of law relating to trespass or property rights.

This is the language of one of North Carolina’s newest constitutional rights, the right to hunt and fish. The amendment limits the state in how it can manage wildlife by ensuring that hunting and fishing are the “preferred” means of population control.

The bill was largely backed by hunting and outdoor sporting groups and the NRA, with mostly animal-rights activists voicing the opposition. Voters approved of the amendment with a 57 percent majority.

“Throughout the country, organizations lobby every day to restrict or even prohibit hunting and fishing,” said Republican state Sen. Tom McInnis, a cosponsor of North Carolina’s right-to-hunt amendment. This measure, he said, is “about protecting the rights of our children and grandchildren to hunt and fish in North Carolina.”

While some voices on both sides painted this as a gun rights issue — because the phrase “traditional methods” was included in the bill — most voters saw it as a way to preserve hunting traditions and ensure that hunting isn’t phased out by other land and wildlife management laws.

“This amendment guarantees the sporting traditions that you have enjoyed will still be around for future generations of Americans and that regulations will always be based on sound science,” said the NRA. “Currently, 21 other states have similar provisions in their states’ constitutions.”

Animal rights activists argued that the language of the amendment was too vague, suggesting that the “traditional methods” language doesn’t imply just firearms, but also bear traps and other debilitating snares.

Other opponents argued that this was a gimmick to get more conservatives to turn out to vote. “You can’t divorce this issue from the other five constitutional amendments,” said North Carolina state Sen. Floyd McKissick, a Democrat. McKissick said that the amendment was included to get conservative voters to the polls to vote for other issues not tied to the hunting amendment.

Certainly some details of the scope of this amendment will have to be worked out, however, it still means good news for hunters, fishers and all outdoors enthusiasts in North Carolina.