101-Year-Old Mississippi Woman Bags Two Does with One Shot

When Bertha Vickers was born on January 9, 1918, World War I still raged across Europe, Woodrow Wilson sat in the White House, and only three or four companies sold firearms on the commercial market. 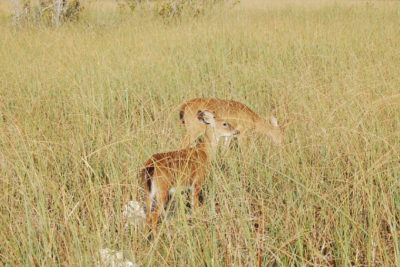 Talk about getting some bang for your buck! (Photo: Public Domain/Wikimedia Commons)

Now, 101 years later, the Mississippi woman continues the hunting tradition that helped her family through the Great Depression, and she’s even managed to do something most hunters never do: bag two does with one shot.

Vickers told the Clarion Ledger in January that she had spied a doe from her blind near Morgantown, but she decided to wait for a bigger one. When a larger doe came into view, she pulled the trigger.

“I saw two deer on the ground,” Vickers told the newspaper. “It shot plum through both of them. They both dropped right there. They didn’t take another step. I knew it was back there, but I didn’t realize it was that close to her where it could get shot.”

Vickers has been hunting and fishing her entire life, but this season she’s run into more trouble than usual. She was happy with the blind her relatives had built for her, but she couldn’t get a clean shot with her .243 WIN. Then, when her grandson suggested she use a 7mm-08, she found that she couldn’t cycle the bolt.

In all, she had missed three opportunities to harvest a deer until her persistence finally paid off with the double kill.

“When you’re as old as I am, you naturally think each one could be your last one, but I’m going to go as long as I can,” Vickers said. “I enjoy it. I love being outside.”

Deer hunting isn’t the only outdoor sport Vickers enjoys. While she can no longer fish alone, she hopes to get out on the water again this spring.

“I didn’t get to fish any last year,” Vickers said. “I’m not as strong as I was last year. I hope to get to fish a little this year.”

“I killed several squirrels before I went deer hunting,” Vickers said. “I just went right around here in the edge of the woods. I’ve always gone by myself close by.”

Vickers mows her own lawn, keeps house, cooks and raises vegetables, and this isn’t the first time she’s received media attention for her self-reliant, age-defying habits.

She was featured in The Clarion Ledger last year after she bagged a deer just a few weeks before her 100th birthday.

“I don’t know why everybody is making such a big deal about it,” Vickers said at the time. “If I’d killed a big buck I could see it, but it was just a doe.”

Vickers plans to butcher her deer herself, though “my grandson skins them for me, so I don’t have to fool with that.”