One Dead After Grizzlies Attack Elk Hunters in Wyoming 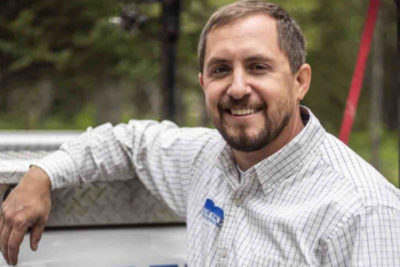 Mark Uptain was killed by a grizzly bear on Friday while guiding an elk hunt. (Photo: GoFundMe for Mark Uptain’s Wife & Kids)

One man has been killed and another sustained serious injuries after a grizzly bear attack in Wyoming on Friday.

Authorities at the Teton County Sheriff’s Office said Florida resident Corey Chubon and local guide Mark Uptain were field dressing an elk that Chubon had shot with a bow the previous day. While packing the elk, two grizzly bears approached the hunters, one of which attacked. Chubon was able to escape, but search and rescue found Uptain’s body the next afternoon.

“This is a tragic situation. Our thoughts and prayers go out to the victims’ families and friends,” said Brad Hovinga, Jackson regional wildlife supervisor for the Wyoming Game and Fish Department.

The hunters found the elk’s body undisturbed, Hovinga said in a press release, which rules out food guarding as a motivation for the attack.

“This type of bear behavior is not consistent with what we would normally see, especially from a family group,” Hovinga said. “It is more typical for bears to behave in a defensive manner to protect a food source, cubs and their personal space in a surprise encounter.”

Authorities said in a separate press release that a sow (female grizzly) first attacked Uptain. Chuban was able to run to his pack a few yards away and retrieve a pistol, but was unable to safely fire a shot at the bear. The sow suddenly spun, charged Chubon, grabbed his foot, and dragged him to the ground. He sustained injuries to his leg, chest, and arm, but was able to throw the gun to Uptain and get loose before running from the scene to phone for help. The second bear, later determined to be a yearling, did not engage either Chubon or Uptain.

A later investigation also found a discharged can of bear spray with the safety off near the body, which investigators determined had been used on the sow.

Wyoming Game and Fish have since killed two bears believed to have been involved in the attack. Authorities set foot snares in the dead elk’s vicinity and found a yearling grizzly caught in the trap the next day. While investigating, Game and Fish personnel were charged by the sow, who they shot and killed. After the yearling was “determined to be involved in the attack,” it was euthanized.

Mark Uptain was a father of five, a small business owner, and a hunting guide for Martin Outfitters.

In a recent interview with the Jackson Hole News&Guide about his business, Uptain said he spent his free time with his wife, Sarah, and their kids, serving on the board of elders at First Baptist Church, riding horses, hunting, fishing, biking and playing chess.

Shortly after Uptain’s death, Rauli Perry, a family friend, created a GoFundMe page in his name.

“I know I can’t take away the pain,” Perry says on the page, “but if we can help support Sarah to be able to focus on the kids and not worry about finances.”

So far they’re well on their way. In the three day’s since the page’s creation, donors have raised over $122,000.

Previous post: What I Love & Hate About the FMK 9C1 G2