In North America, we are used to the usually regulated structure of hunting seasons. The first of the seasons open up in late August and early September, and the latest close around the end of January, for the most part. Spring turkey and bear are exceptions. But other than those many hunters are left to twiddle their thumbs for a majority of the spring and summer months. However, if you are willing to expand your definition of the word “game” there is one critter that will allow you to keep your wing shooting on point and keep your dog retrieving during this drought, the Rock Dove or more commonly known as the street pigeon.

The Rock Dove or “Common Pigeon” was introduced to North America in the early 17th century when settlers brought domestic pigeons over on their Atlantic crossing, specifically for food. Since this introduction, the species has spread throughout the continent and can be found from coast to coast and thriving in every environment from the urban jungle to wild cliff edges. The “Rock Dove” gets its name from its native range of Europe, Africa, and Asia, where they prefer to nest up on a high cliff and rock ledges away from predators. Being an introduced species the Pigeon is not governed by the same seasonal structure as native wildlife, thus giving hunters an opportunity to hunt them year-round with no bag limit or method of take.

Although Most Americans think of them as “Sky Rats” these birds can be fun to hunt and if they are taken under the right circumstances they can be great to eat.

There are several ways to hunt these birds. In more urban settings you can shoot them with air guns, obviously with the permission of the property owner and only under safe conditions. But most people that I have asked are more than happy to let you take a few out of the population because they nest in the nooks and crannies of carports or roof overhangs and their droppings are acidic and can eat away the paint and metal that protects the roof. 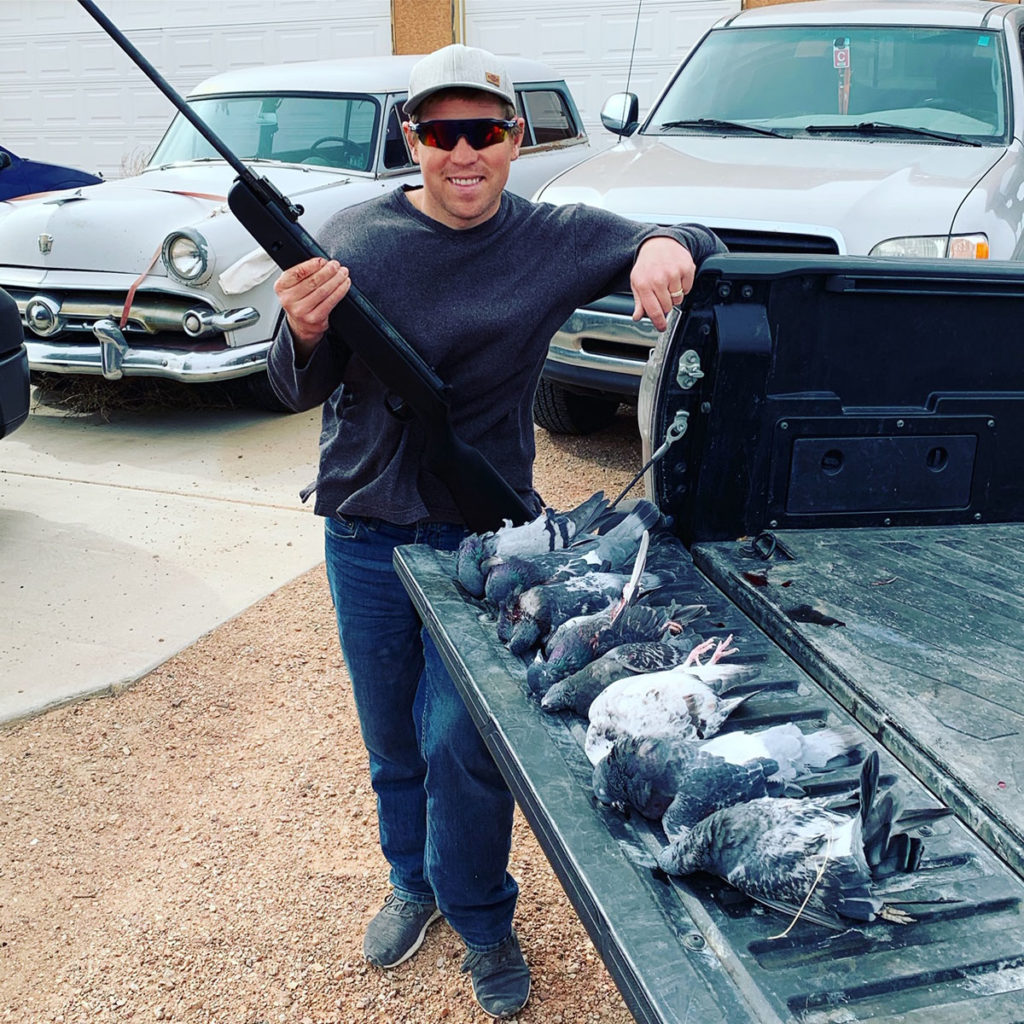 This is a little afternoon hunt that I had in town with an air rifle. It was a great way to get some shooting in and help out some friends by getting rid of the pigeons.

Although a little urban hunting can be a great time, I prefer to hunt them near grain bins or railroad tracks where you can decoy them in and have some real fun. Just like with most flocking birds, Pigeons are gregarious, meaning that they like company. This makes them very susceptible to decoying. If you can find a cut cornfield next to a grain bin and throw out some decoys, you are certainly in for a good time. Although these birds may seem big and slow when they are sitting on a roof, they are very agile on the wing and they offer some of the most challenging wing shooting that you can find. They usually come in low and fast or they seem to just dump in from the stratosphere and surprise you in a flash.

If you can conceal yourself well and get some motion decoys out where they are visible to the birds that are sitting, eventually they will not be able to stand it and they will come over to see what is going on, and with no bag limit if you get a solid setup you can be in for hours of fun.

Although some companies make pigeon specific decoys, I have had great luck using a Mojo dove decoy. Just be careful and identify your target, because if you shoot a morning or white wing dove out of season you are most definitely breaking the law. But with some careful identification, you should be fine.

A great little shoot that my dog and I had in a recently cut field.

Another great aspect of these birds is their availability to hunt. I have very rarely been turned down when I have asked a property owner to shoot pigeons off his place. Most often I have been told to “Kill em all” or “Why the hell do you want to shoot those”, which is a great change in pace to the countless times I have been turned down when asking to hunt more desired game. I have even had property owners give me gift cards and try to pay me for taking care of what they think of as a pest. Which is quite a change of pace in a hunting world where it always seems that people want to be paid for letting someone have the opportunity to hunt. 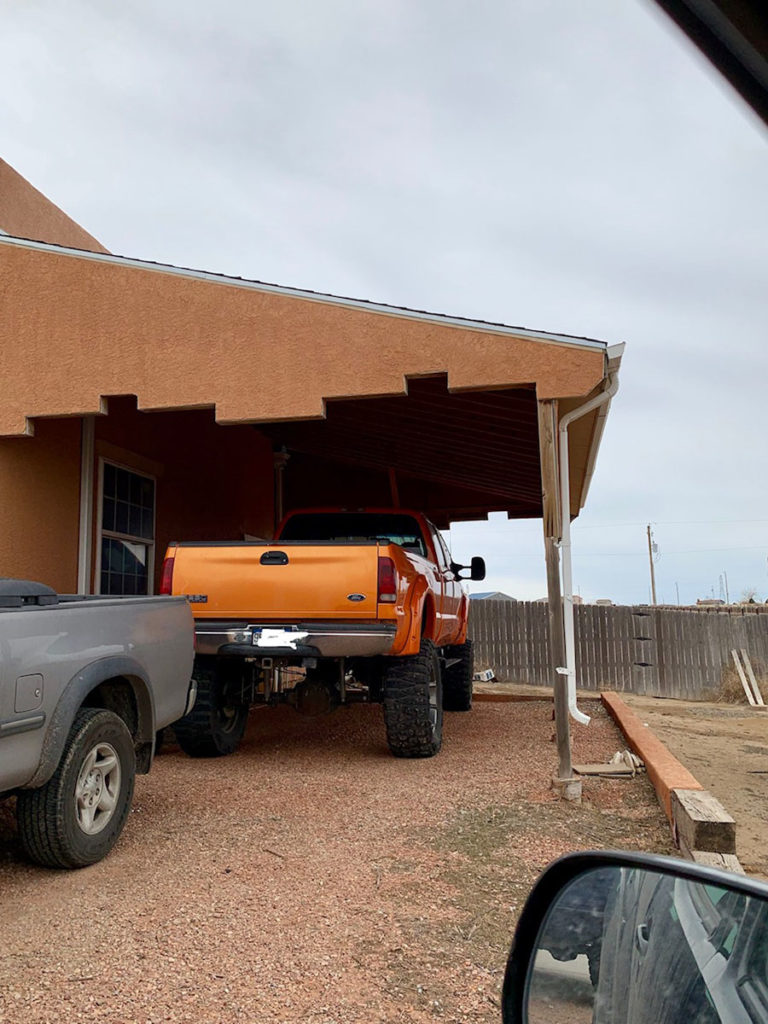 This picture is of the carport that a friend wanted me to come to shoot pigeons out of because they were ruining the paint on his truck. 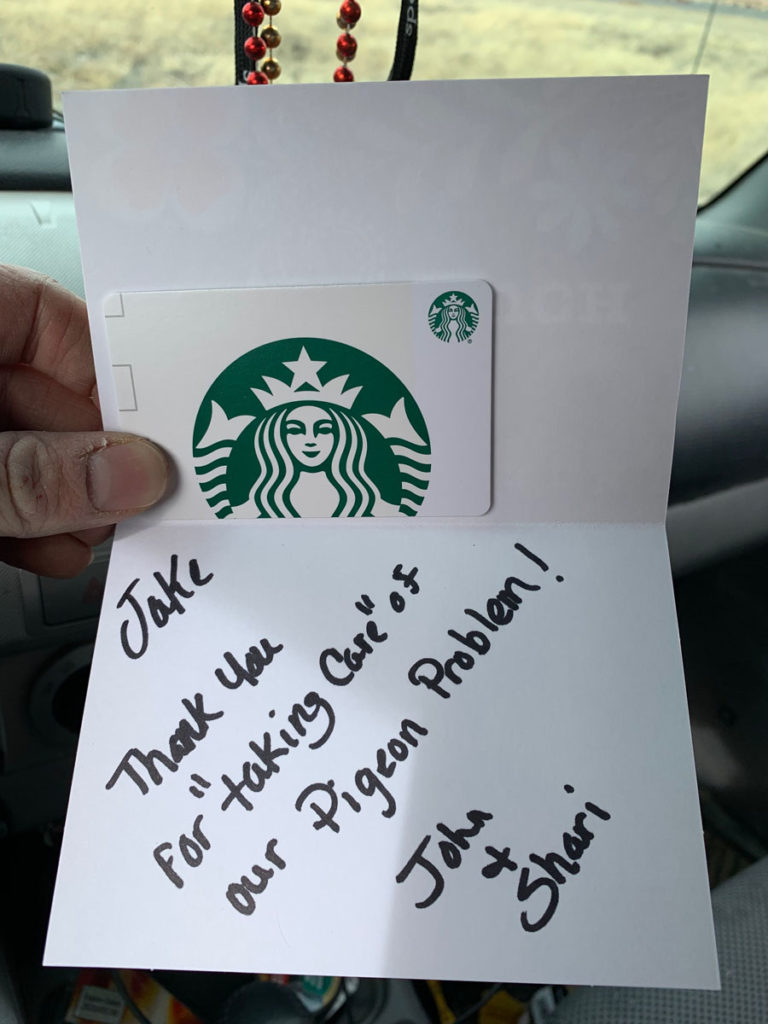 This picture is of the gift card that I received for “taking care” of them. I have experienced this several times when shooting pigeons.

Although most people would rather throw them out, I prefer to eat them. There is really no reason why you can’t eat them if you shoot a bird that has been sitting in a feedlot or on a grain bin, they are essentially a corn-fed bird at this point and they taste great. Obviously, if you shoot one in town eating from the garbage I would think twice, but if you open one up and see nothing but cracked corn, get them ready for the grill. A quick test for seeing if a pigeon is fit to eat is by checking their craw, the place that they store food before it goes into the gizzard. If you can feel hard grain in there then they are good to eat. If it feels soft, I would recommend cutting it open and checking it out further. 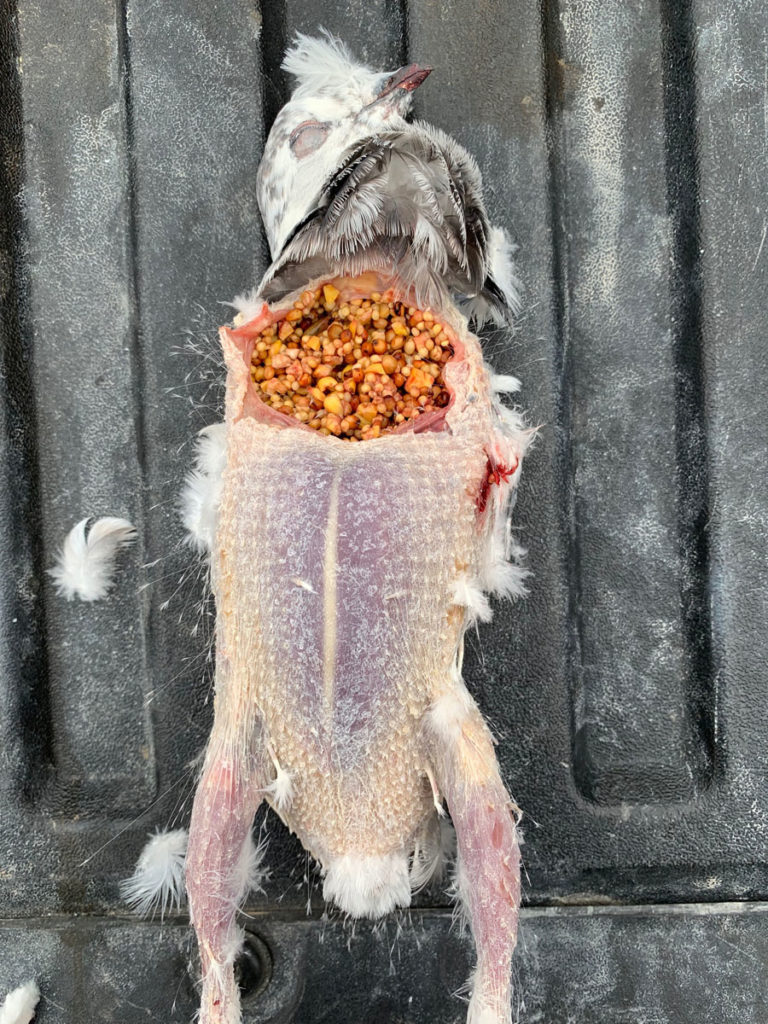 Most people think of pigeons as dirty animals, but as you can see they usually only eat grain and seeds which makes them great to eat.