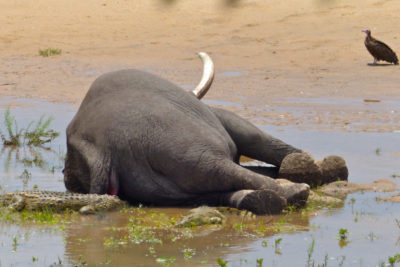 Eighty-seven dead elephants were reportedly found in Botswana recently, all of which had been killed for their tusks. (Photo: Bernard DuPont/Wikimedia Commons)

An advocacy group in Botswana claimed earlier this month that poachers had recently killed 87 elephants near a famous wildlife sanctuary.

“I’m shocked, I’m completely astounded. The scale of elephant poaching is by far the largest I’ve seen or read about anywhere in Africa to date,” said Dr. Mike Chase, who says his team discovered the dead elephants while conducting an aerial survey for his non-profit, Elephants Without Borders (EWB). “When I compare this to figures and data from the Great Elephant Census, which I conducted in 2015, we are recording double the number of fresh poached elephants than anywhere else in Africa.”

The BBC reported at the time that poachers had been emboldened by the Botswana government’s recent decision to disarm its anti-poaching units.

“The poachers are now turning their guns to Botswana. We have the world’s largest elephant population and it’s open season for poachers,” Chase told the BBC. “People did warn us of an impending poaching problem and we thought we were prepared for it.”

EWB has not released the results of their most recent 2018 survey, but due to the “high number of elephant carcasses”, they felt it “a moral and patriotic duty to immediately report this to the Government of Botswana, which it did soon after the survey commenced.”

The group has come under fire in recent weeks for what some say are political motivations. Officials for the Botswana government have also contested Chase’s survey, and subsequent visits to the wildlife sanctuary located just 19 corpses – six of which were found to be poaching victims – according to The Guardian.

“Last year, the whole year, we lost about 81 elephants. So I can say it’s just normal, like any other year, we haven’t recorded any mass killing,” said Churchill Collyer, the deputy director of the wildlife department.

“In the rest of the coordinates supplied by Chase that make up the 87 alleged in the media, there was either no indication of a carcass or only very old bones were found,” said Brigadier Simon Motswana Barwabatsile, head of Botswana’s anti-poaching committee.

Elephants Without Borders countered both accusations on Sept. 20 with a statement on its website.

“EWB has the greatest respect for Government and EWB is completely a-political in its work,” they said. “EWB’s sole concern is for the wildlife and the natural heritage of our wonderful country and its preservation for future generations of Batswana.”

As to the claim itself, they reiterated the qualifications of their team as well as Dr. Chase, claiming to be “perhaps the most experienced wildlife aerial survey team in Africa.”

“Our current survey adheres to the highest international standards for counting wildlife,” they continue, “the same standards employed for the surveys EWB conducted in collaboration with the Government of Botswana in 2010 and 2014.”

Their final report is set to be released this month.

Unlike other nations in the area, Botswana doesn’t allow elephant hunting of any kind, although the government is currently considering lifting the ban.