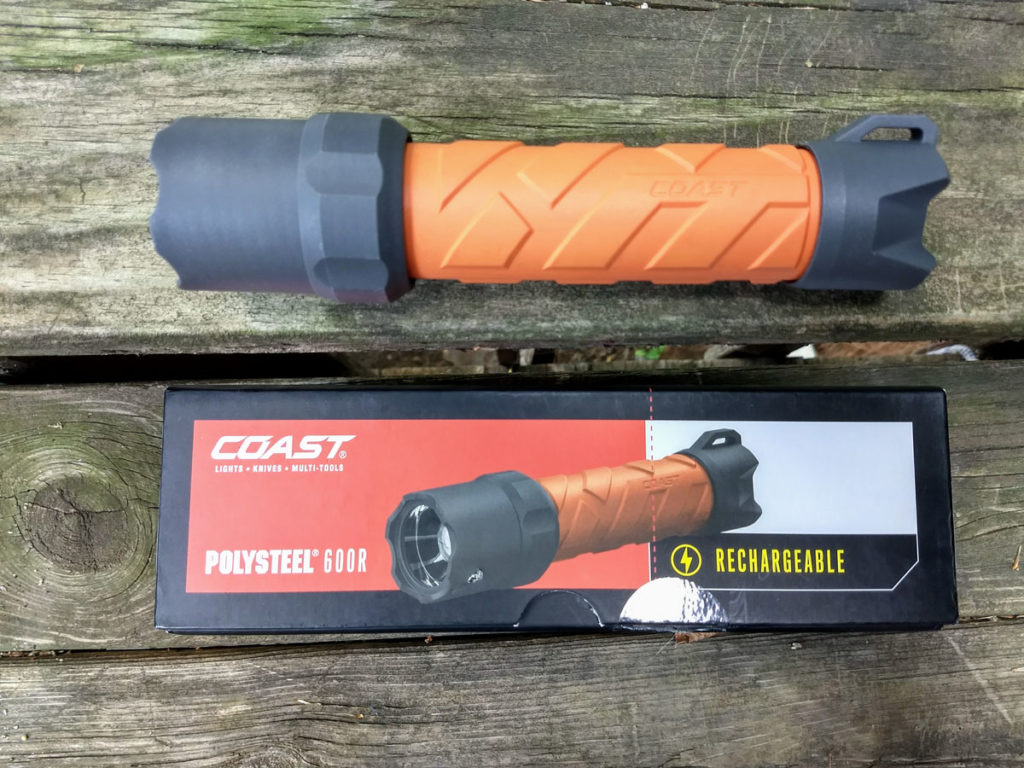 In an outdoors market awash in flashlights, I recently found one light I’ll be hanging onto for my hunts: the Polysteel 600R LED Flashlight from Coast Products, Portland, Oregon.

I’ve used my Polysteel 600R for six months now, around the house and on three hunts. The Polysteel 600 is rugged, weather resistant, and can really reach out into the dark.

Initially, I choose the Polysteel 600R because of dual-power capability. It runs on either a rechargeable lithium-ion battery pack or four (4) standard AA alkaline batteries. Frankly, I’m damn tired of buying batteries, especially those super-pricey CR 123A batteries apparently made from gold.

But a flashlight with over 500 lumens of illumination and a rechargeable battery pack? Okay, I said to myself, I’ll give it a try. 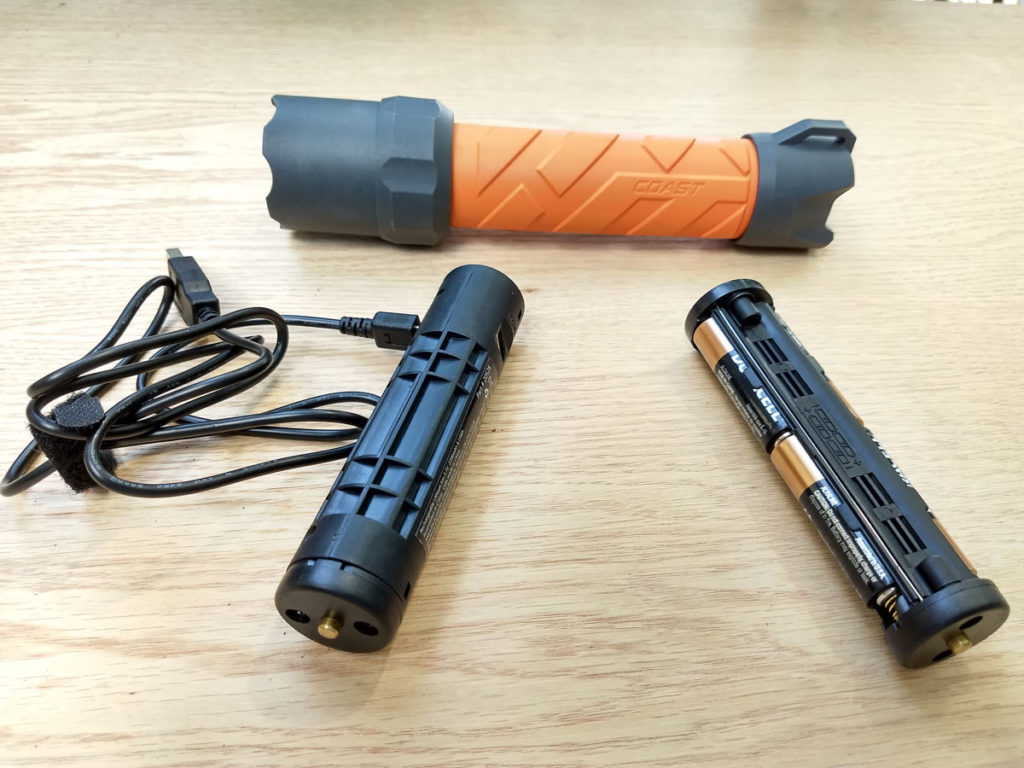 The Polysteel 600R runs on either the rechargeable lithium battery pack (l) or on 4 AA batteries (r ).

The Polysteel 600R has three “ON” settings, activated by depressing the button on the back cap. The first press gets you full power; press again and it dims down by roughly one-third; a third press and you are even dimmer.

The head or front of the flashlight adjusts the LED beam. At any illumination setting, twisting the front section of the light all the way to the left widens the beam or go to the right for a much tighter beam.

Coast rates the tight beam, at the highest illumination, as able to reach out 800 feet. I’ve used it to spot deer in that half-hour before dawn sitting in a blind, deer I was later able to determine were approximately 500 feet away. The deer were well illuminated, too.

To recharging the lithium-ion battery pack, remove the end cap and slide out the battery pack. Attach the charging cable (included) to the pack’s charging port and the other end of the cable to a standard USB unit that plugs into a 110-volt outlet. When the battery pack is very low, it takes about two hours to fully charge my Polysteel 600R. Coast rates the run-time for a fully charged battery-pack or the 4 AA batteries at just under six (6) hours at the high beam setting, 35 hours on low beam.

The aggressive texturing on the flashlight’s body provides a solid grip, wet or dry. The light fits nicely into a backpack, and I’ve slid it securely into my back pocket many times, too. The end cap also has an attachment point for a lanyard.

Coast rates the Polysteel 600R as drop-proof and crush-proof, crediting that toughness to the flashlight’s stainless steel-core wrapped with a thick poly outer layer. I haven’t tried to crush mine, yet, but I’ve dropped it several times onto driveway gravel and hard-packed Texas earth from approximately four feet. None of these drops phased the unit. 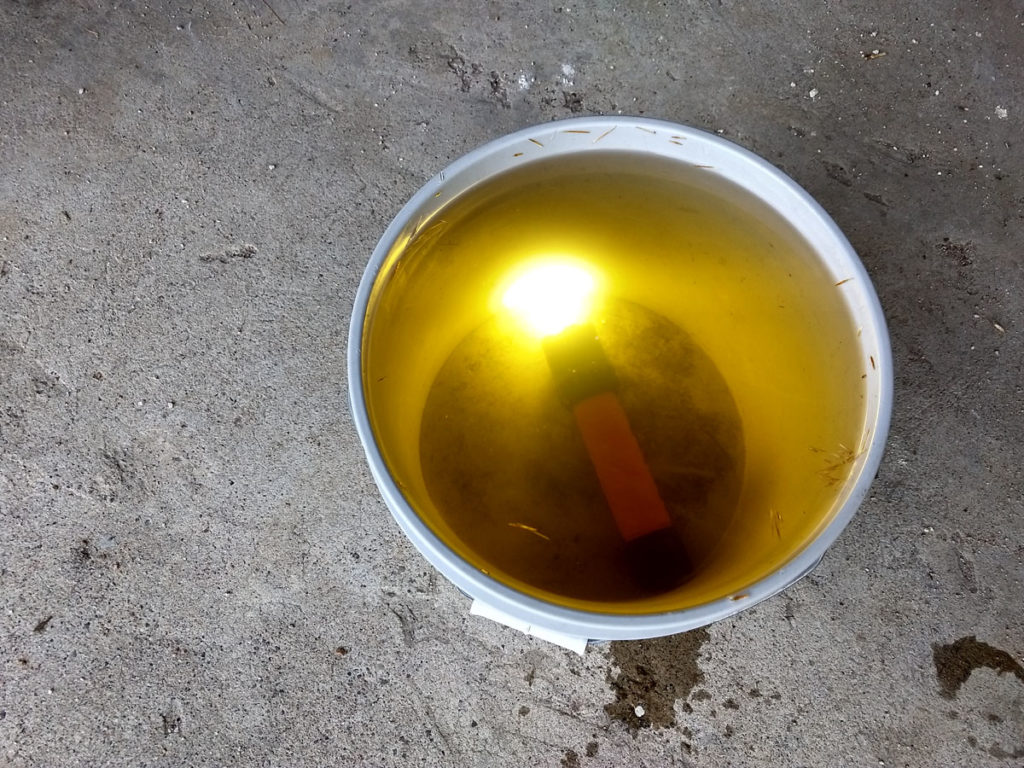 The light stayed on the whole time. When I removed the light from the water, I took it apart and found the inside completely dry.

The Polysteel 600R is a great flashlight for hunting and general backwoods adventures.  If the $89 price tags bothers? Just remember that money will be used up in the first four or five sets of CR123A lithiums to power other flashlights.

At six months with my Polysteel 600R, I am essentially even on what it would have cost me to power a CR123A model light. And I’ll have years of recharges to come.