The Razor-Lite by Outdoor Edge 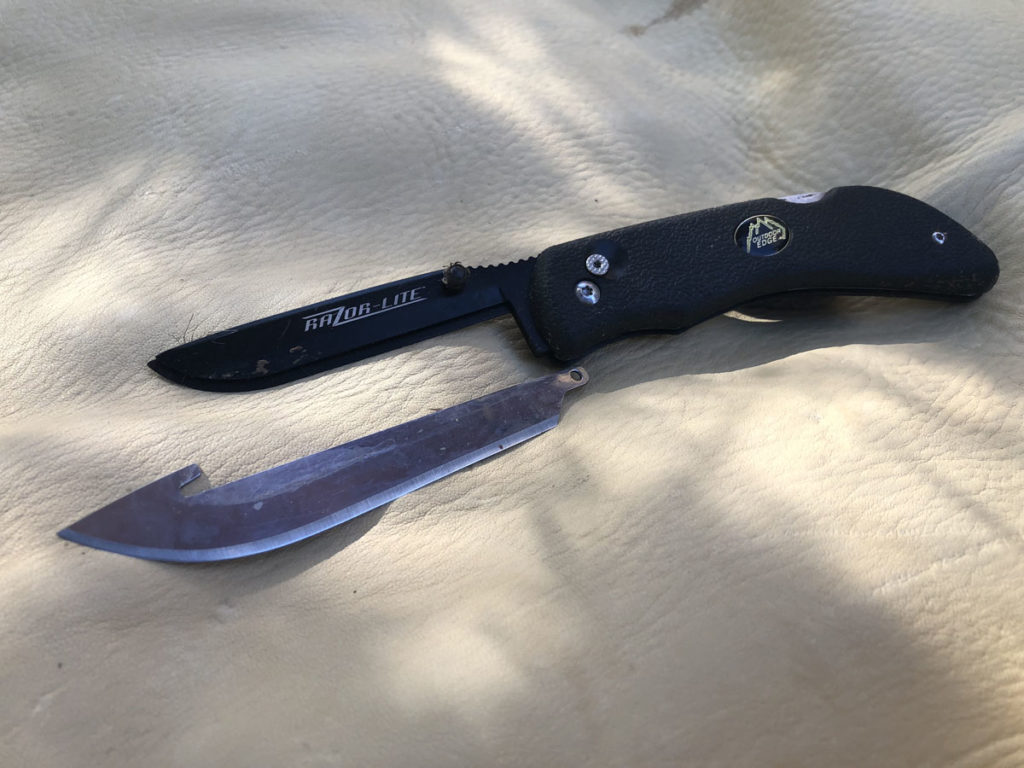 I bought this knife with great expectations. I really liked the idea of having one knife that could skin an elk from head to tail without sharpening. All I had to do was change a blade with the simple push of a button and I had a sharp knife again.

The time of the hunt came and my wife shot a bull—a good one. It was hot and I wanted to gut and skin him quickly. I started the process and reached a point when I needed to change the blade on the knife. I was very excited to change the blade out for a sharp one, but when I pressed the button to release the blade, it did not release. I thought there might have been some hair or blood in the knife, so I grabbed a pair of pliers from my backpack and attempted to pull the knife blade out once more with no success. 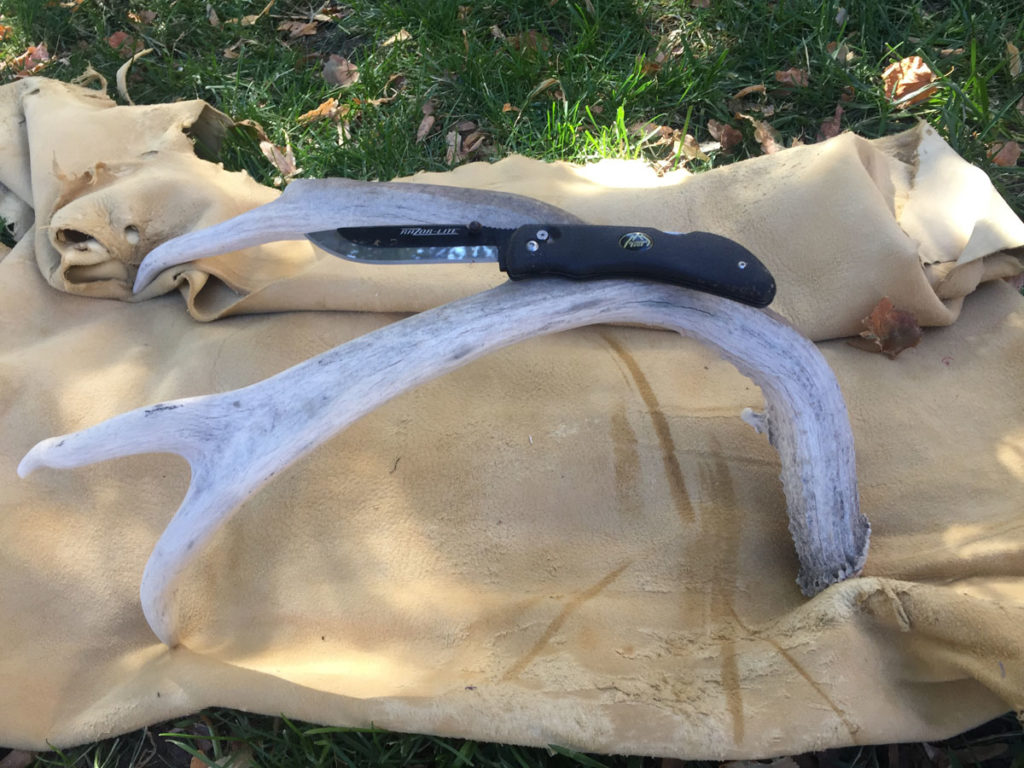 Once again I was going to be skinning an elk with a dull knife, which is always very frustrating. When I finally got back to camp I was furious that the knife didn’t work. I took it apart and came to find out that there is a small spring loaded pin that holds the blade into position. Somehow this pin had been sheared in half and was keeping the button from releasing the old blade and allowing me to place a new one in. I finished my hunt and returned back home, deciding that although I probably shouldn’t have expected anything great from a $20 knife, I’d contact Outdoor Edge and tell them about my little situation.

I received an email back within 24 hours. This is the entire conversation:

My name is Jake Wallace. I bought a Razor-Lite at the beginning of the season. I was extremely excited to use this knife this season, since both myself and my fiancé had two elk tags and two deer tags. Unfortunately on the first bull that my fiancé killed the knife broke on me. I was unable to get the blade out of the knife to change the blades. The button to change the blades would not release the blade. I was forced to quarter the elk with the one dull blade. I was so disappointed with the knife. I had to quarter an elk last year with one dull knife and swore that I wouldn’t do it again. After the knife broke I was forced to do it again. I have purchased many of your products before and have always been impressed with the quality, I cannot say that about this experience. I would like to get the knife replaced or atlas fixed.

Congrats on getting so many tags. I’m really sorry you had to go through that again two years in a row. I can send you a replacement knife for sure. It sounds like the pin in the knife that releases the blades broke. Please allow 7-10 days for shipping.

Thank you very much! I will continue to have a positive view of Outdoor Edge products. It is becoming more and more rare for a company to stand behind their products and its customer service like this that will keep me using your products.

Once I received the new knife I was pleasantly surprised. The blades are incredibly sharp. One blade is plenty sharp to skin a whole deer without having to change it out. It usually takes two to get an elk taken care of, but the blades are very easy to change and you don’t feel like you’re going to lose a finger when you change them out. I have never had a blade break while using the knife, even when I use it to wedge between vertebrae when taking the head off of an animal. 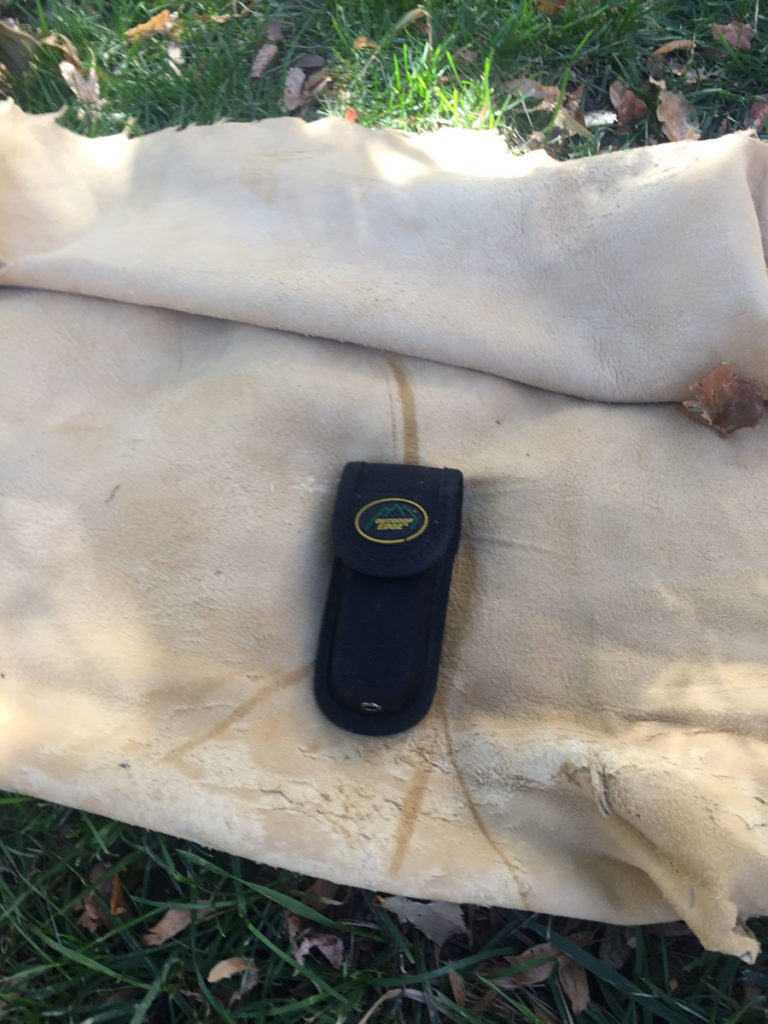 I will say that you should dispose of the blades carefully, even when they won’t cut through hide well they are still very sharp and I have lost a couple good backpacks to used blades punching through pockets. At only $9.99 for a six-pack, replacement blades are very affordable. I can usually get through an entire season with a six blade set, and with the knife only costing $24.99 (including six blades), it’s a good deal.

Since I had the issue with the first knife I have had no problems, and have bought a couple more knives since. Although they say that it is the first impression that is lasting, I believe in this case that it is opposite. I find it refreshing when there is still a company that stands behind such a simple product and cares about customer satisfaction. I will continue to use Outdoor Edge products for this very reason.

Visit Outdoor Edge to learn more about the Razor Lite by clicking HERE.

Next post: Accufit for an Ambush – a Savage Success!