The U.S. House of Representatives passed a bill earlier this month that would remove the gray wolf from the Endangered Species List in the lower 48 states. Dubbed the “Manage our Wolves Act,” H.R.6784 passed the House on a bipartisan 196-180 vote. 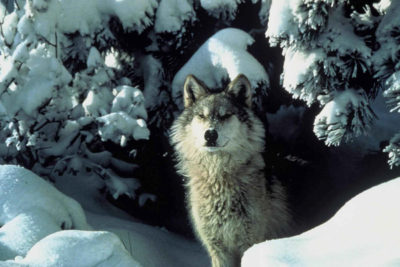 Gray wolves could be removed from the Endangered Species list, but that doesn’t mean states will open hunting seasons. (Photo: Wikimedia Commons)

The bill is sponsored by three Republicans and a Democrat, all from northern and western states.

“The gray wolf has recovered,” the bill’s sponsor, Sean P. Duffy, told Wisconsin Public Radio. “When you have endangered species, that’s when the federal government will step in … but when a species has recovered, we give it back to the states.”

A perennial threat to farmers and ranchers, gray wolves were largely exterminated from the continental United States by the mid-twentieth century. The species was placed on the Endangered Species List in the 1970s, and since then the population has recovered in the western Great Lakes states of Michigan, Minnesota and Wisconsin, as well as in the Northern Rockies and Pacific Northwest.

The Associated Press reported earlier this month that the U.S. Fish and Wildlife Service is planning to delist gray wolves from the Endangered Species Act due to the population’s recovery. The Obama Administration tried to do the same in 2012, but their decision was overruled by a federal judge in 2014.

The House bill would both remove the protections for gray wolves and bar the courts from reviewing the decision.

“The problem has been in the activist courts,” Duffy noted. “When our judges are imposing their beliefs outside of the science behind a movement to delist, that creates a real problem.”

Some Democrats and animal rights groups have blasted Duffy’s bill as a last-ditch effort by Republicans to score a win in a lame-duck Congress.

“The American people overwhelmingly support the Endangered Species Act and the magnificent animals and plants it protects,” Hartl continued. “We don’t expect to see these disgraceful anti-wildlife votes next year under Democratic control of the House.”

Supporters see the House’s move as less related to political party than region of the country.

“Those who don’t live in the area where the wolf has recovered, they don’t really get what’s going on,” Duffy pointed out. “But when you live in the northern part of Wisconsin and Minnesota or go on westward, it’s been a bipartisan issue of House members and senators.”

“It’s a very regional issue and the senators in the northern states are hearing from their constituents and it’s not partisan, it’s how do we effectively have tools to manage them,” Duffy said.

The congressman also clarified, however, that removing gray wolves from the Endangered Species List doesn’t necessarily open the door for wolf hunting. Instead, the bill is designed to move management from Washington, D.C., to the states.

“This is not being done so there can be a wolf hunt,” Duffy said. “This delisting is so farmers can protect their livestock.”

The bill now moves to the Senate, where its chances of passing are much less clear.