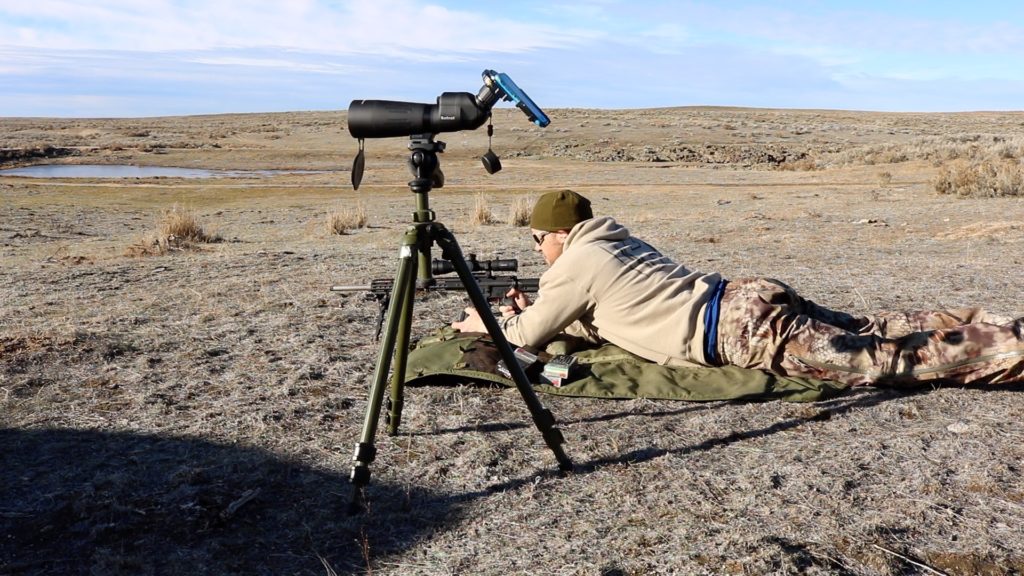 Bushnell has been all over the map in recent years, in terms of levels of products. They have spent a lot of time solidifying their place at the table on high-end products, like the XRS and HDMR, both contenders in military circles. Then they will turn around and introduce sub $200 scopes, such as the Engage series. It can get a bit, well, confusing. So I am very happy with what seems to be a recent change to the product lines. 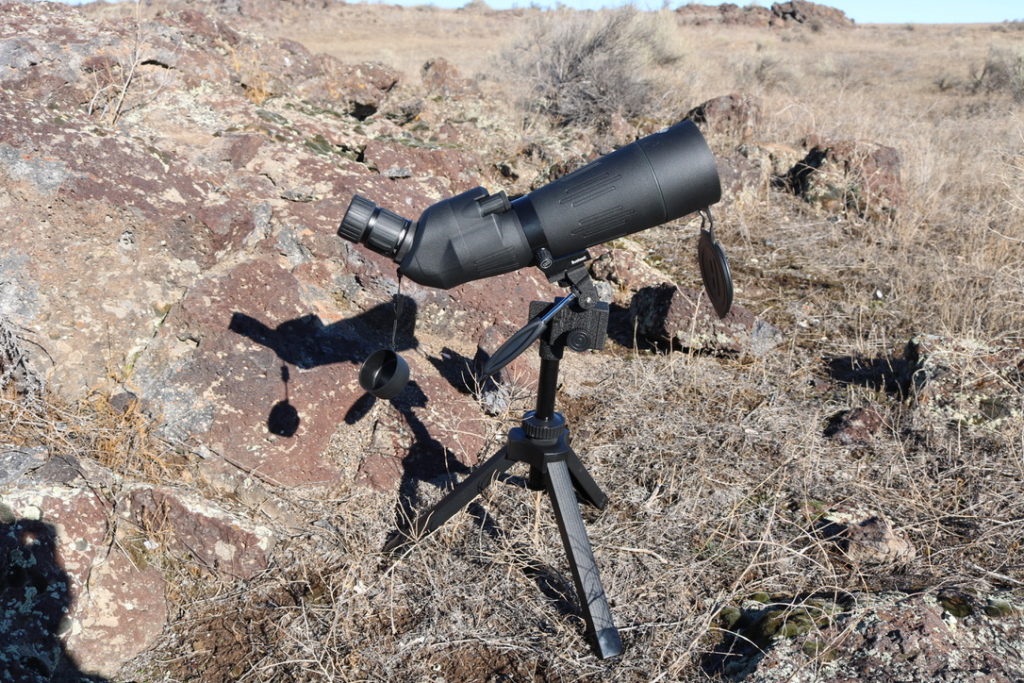 Bushnell has recently re-organized their optics division with four tiers of products. At the very top is the Elite Tactical line, military grade optics. Or as they say professional level products. Next is Forge, for the expert. The third is the Nitro line, for the advanced user. And finally rounding out the package is Prime, what they call the standard. 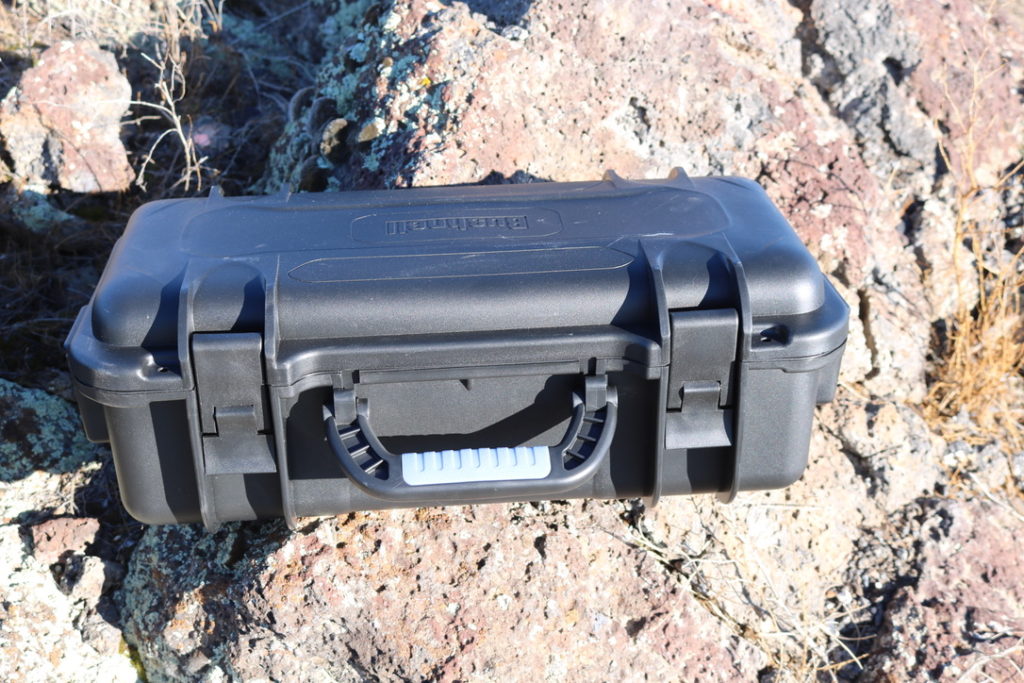 Thought has been put into each of these lines with products geared to please a wide variety of customers. And while the Prime line is what I would call intro level products, it is nice to see a company putting some thought and development into the cheaper end of the market. Prime might be standard, but it is a very high standard. 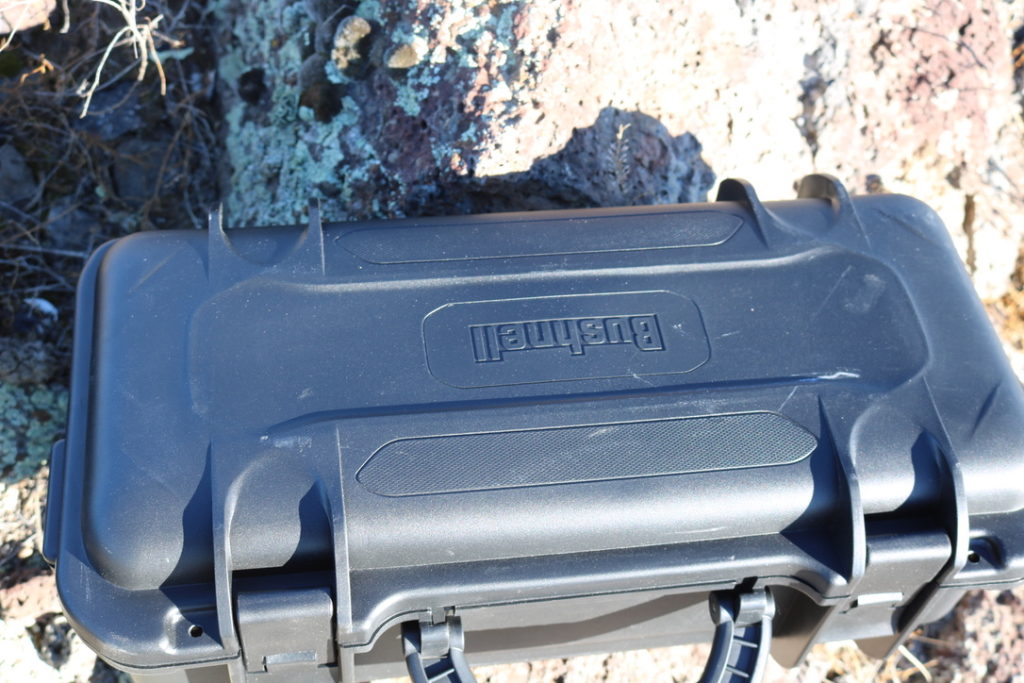 Top view of the hard case.

We’ve all been there and some of us are still there. As a young man, no way I could come up with $1000 for a rifle scope. In fact, I possessed exactly one rifle scope until I was about 28. As an older man now, I tend to think about my kids’ trade school education before I buy anything. Welding machines and drill presses are the cellos and tennis club of this family. So I appreciate Bushnell putting out some products that are affordable on a shoestring budget, that also doesn’t suck. As we said back in Texas, mostly about Lone Star beer- it isn’t cheap, it’s inexpensive. 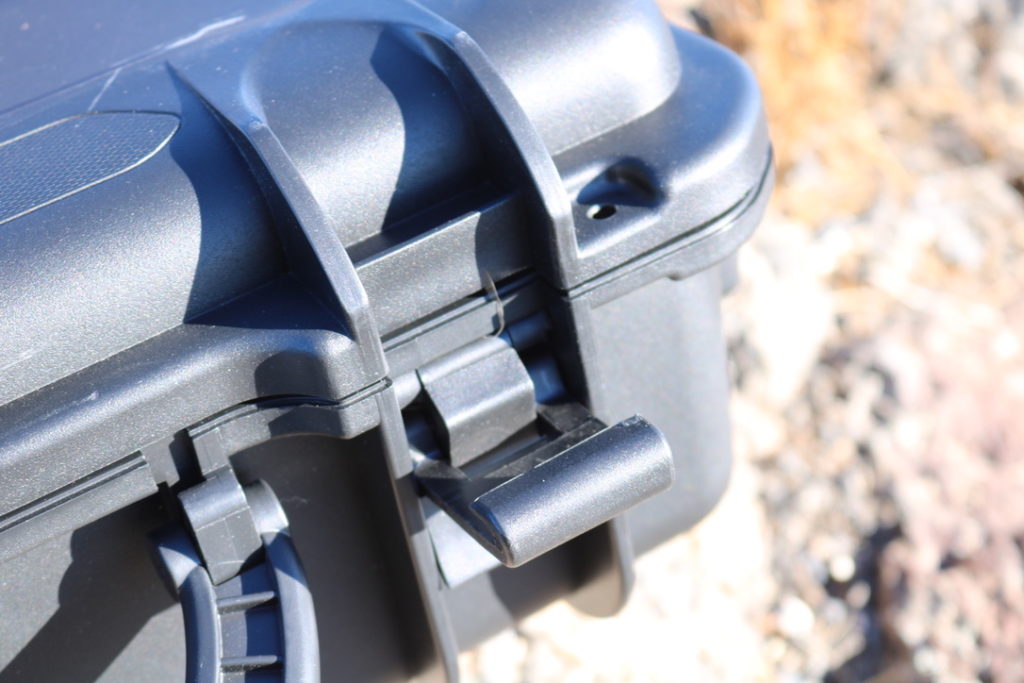 This is not exactly new territory for Bushnell. For many years, they have made excellent products on the lower end of the market. In fact, they had to perform over and above to even be taken seriously, when a decade ago they re-invented the Elite Tactical line to contend for the military. This is actually a huge advantage for a company like Bushnell. The new Prime line shows that when a company can play at all levels of the market place, the high-end features tend to bleed over into the low-end price tags. 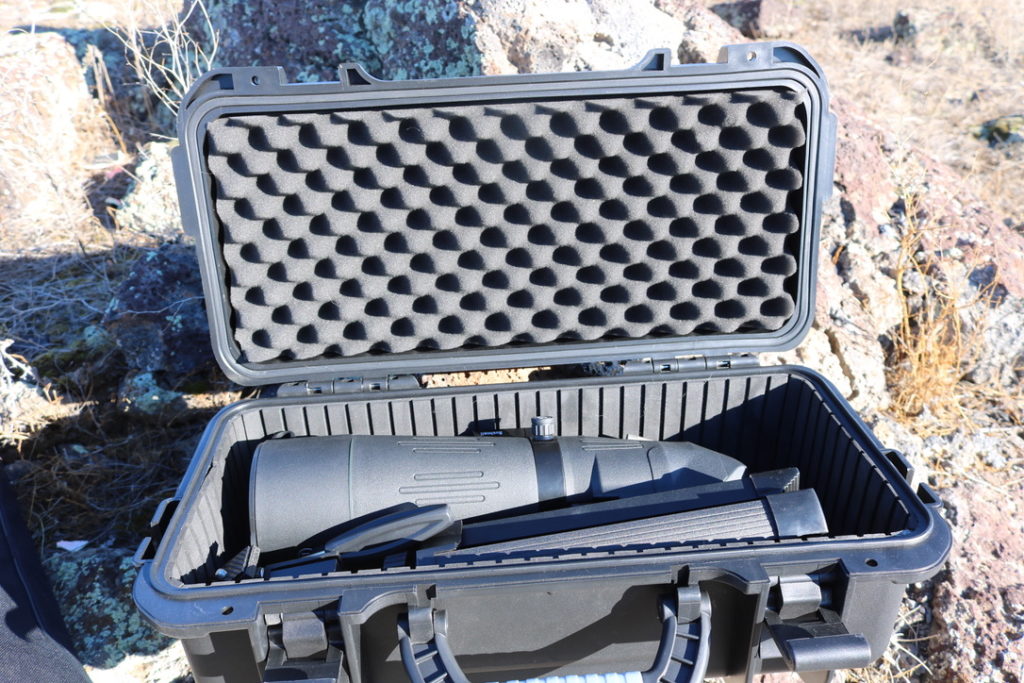 With the Prime Spotting Scope, I wasn’t really sure what to expect. Over my career in the military and as a gun writer, I have used all kinds and grades of equipment. Believe it or not, when I went to USMC Scout Sniper School, our standard spotting scope was still the WWII era M-49. And it didn’t get better after graduating. The USMC finally upgraded from the ancient fixed 20x in….2009. So I can make do with less than space age optics. I just wasn’t sure what a spotting scope with an MSRP of $431.95 was going to do for me. 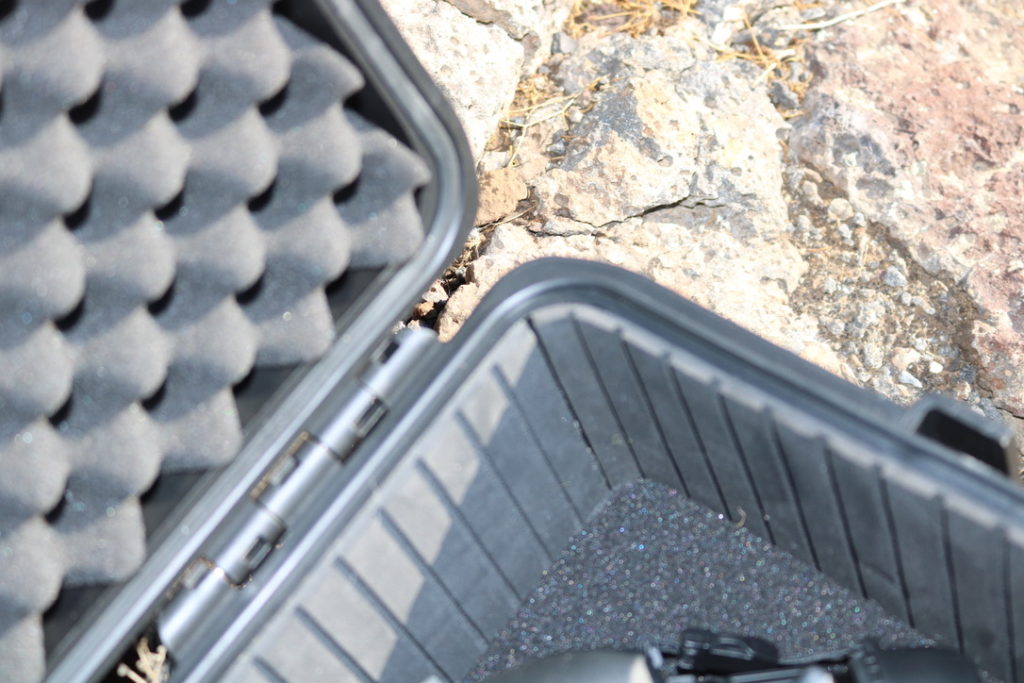 It turns out, it was going to impress the hell out of me. From moment one of opening the box, you can tell Bushnell put some real thought into the Prime Spotter. First off, the outer cardboard box is big. And the reason for that is the Prime comes with a lot of stuff. Extra’s you won’t normally see even on multi thousand dollar scopes. Surprise number one is a hard case with real locking arms, O ring sealed, with legit foam padding for your optic. The case isn’t just good, it is excellent. Inside the hard case is a soft case, so you can go walk about with your new optic if you so desire. The soft case isn’t exactly a Mystery Ranch backpack, but it doesn’t suck. Lurking inside the soft case was the biggest surprise; a tripod! I have reviewed a lot of spotting scopes in my day and none of them included a tripod. Not one. 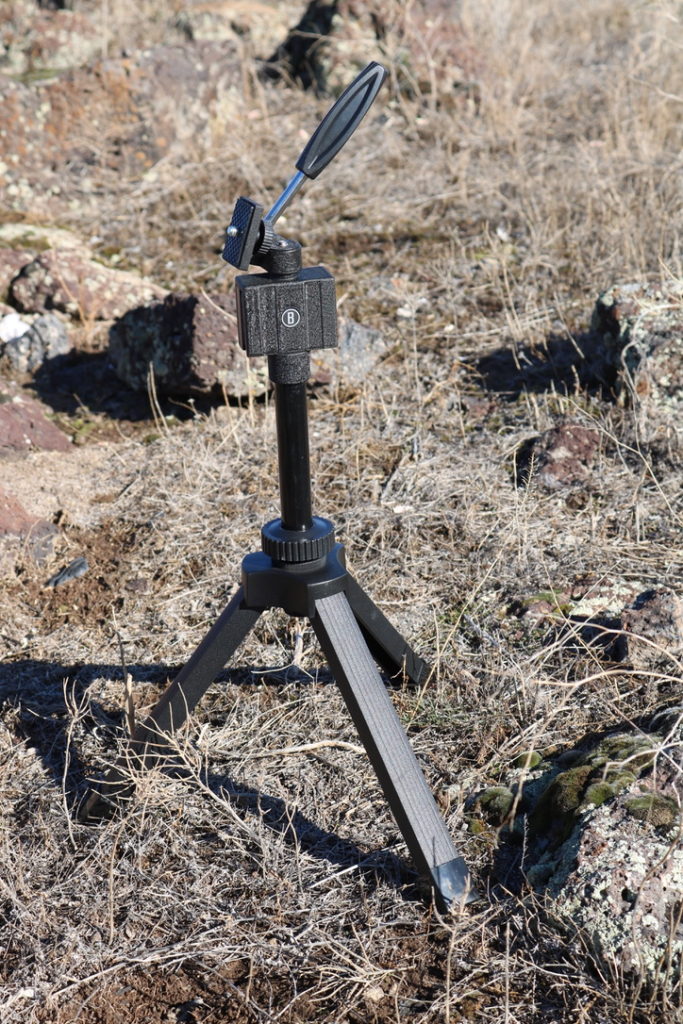 Very respectable tripod, for the price.

The tripod is a little guy, standing about a foot tall at full extension. But by god, it is a for reals tripod. It even includes a tiny swivel mount, with a handle, that allows you to pan any direction, and lock the scope in. Is it going to put manfroto out of business? No, but it works. And unlike anything else I have ever seen, outside of military kits that come with them by design and contract, the Prime Spotter is combat effective, literally out of the box. 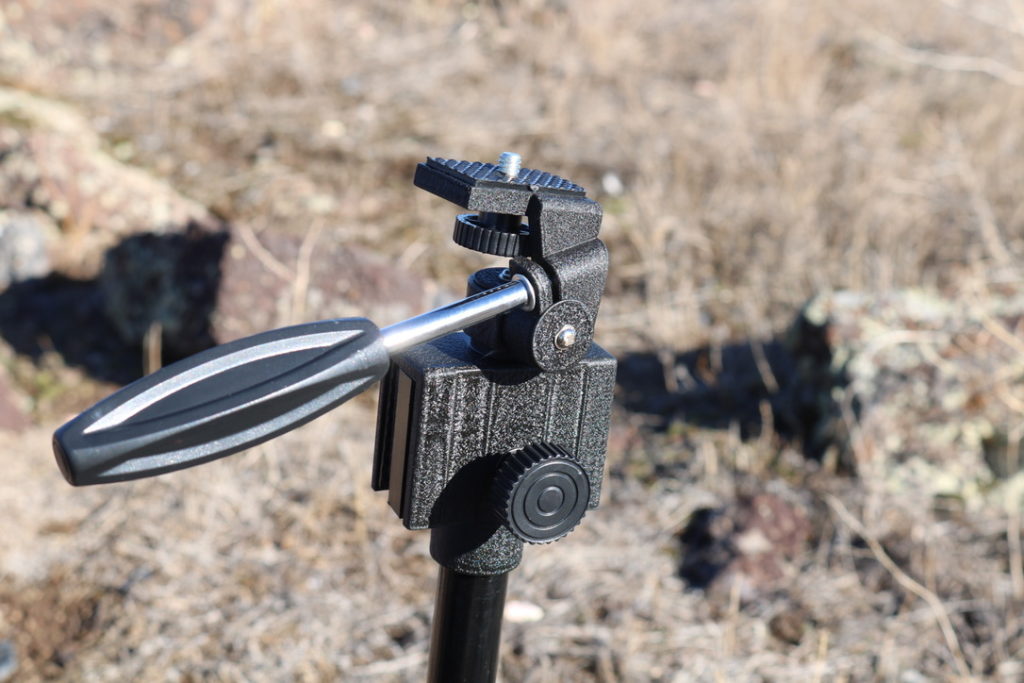 Bushnell clearly meant for this scope to be used, not treated like a princess. The rear lens cap is a full rubber covering, secured with a fastek buckle. The front is a flip down rubber stopper, permanently attached to the front of the scope. They are durable, and hard to lose, both of which count as a positive in my book. 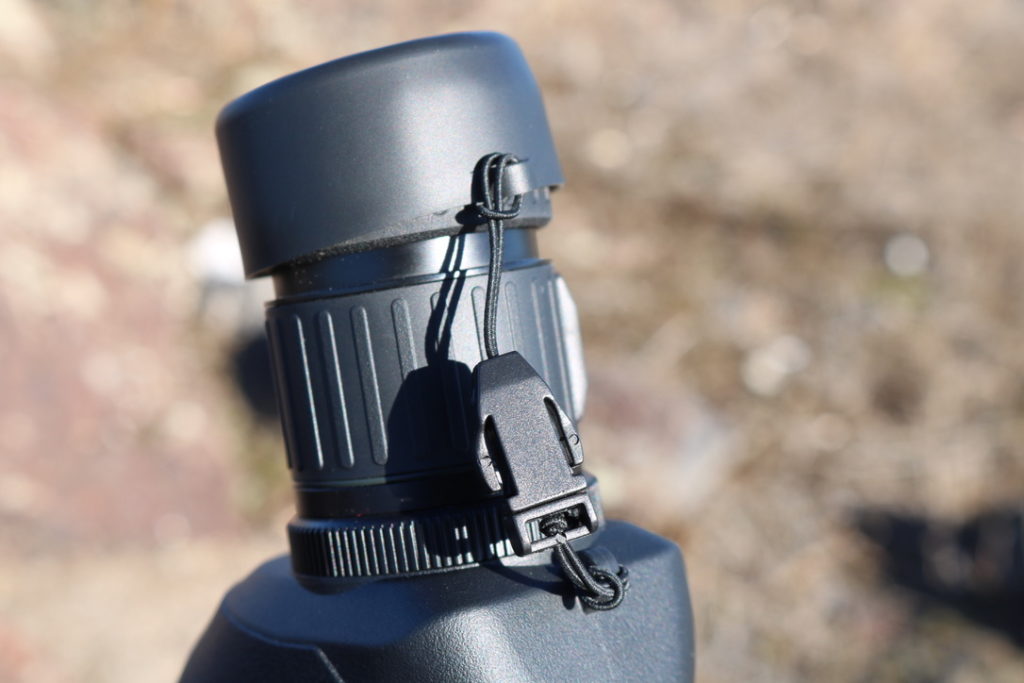 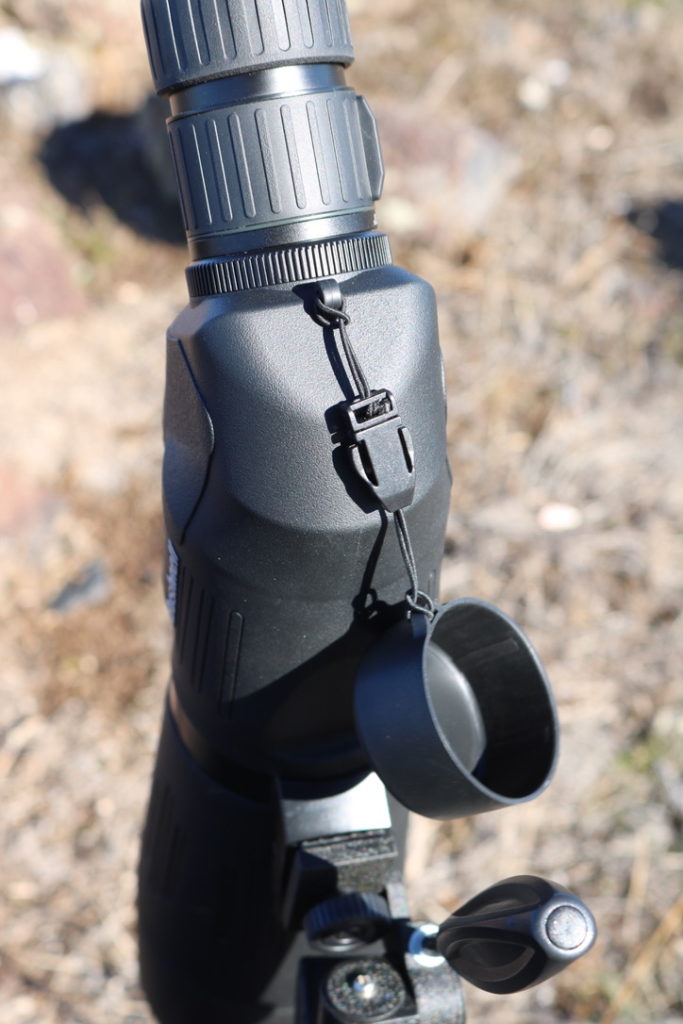 For testing, options are pretty limited with a spotting scope. There is nothing to track and clarity is a highly subjective standard. With a lab, we could do all kinds of neat stuff like measure shades of pink in different lighting conditions. Unfortunately, our lab was all booked up, so I did the next best thing. 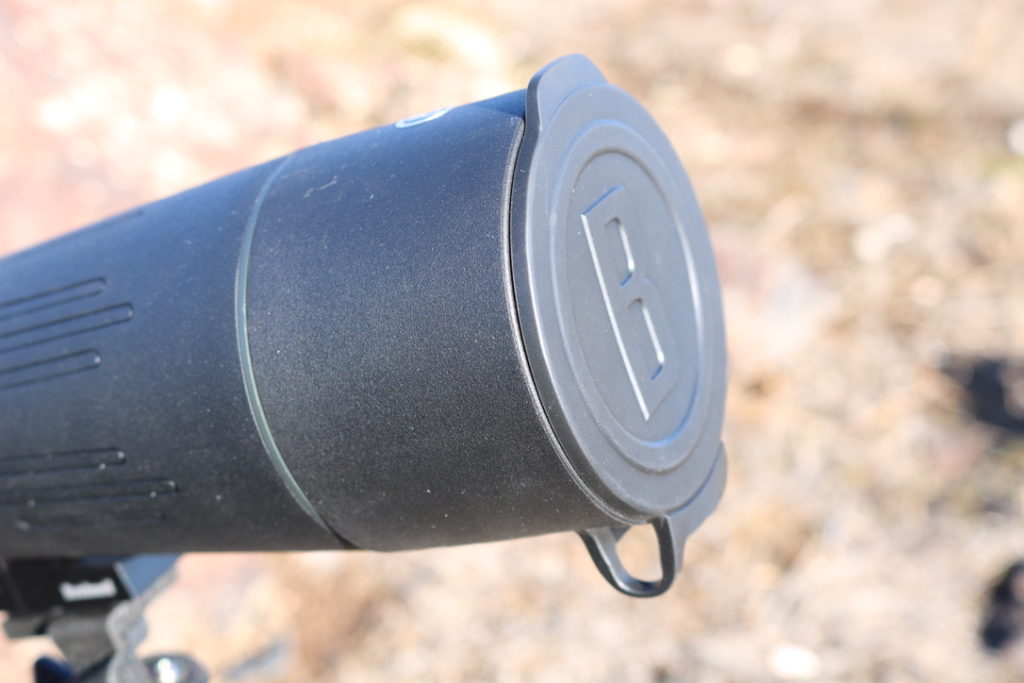 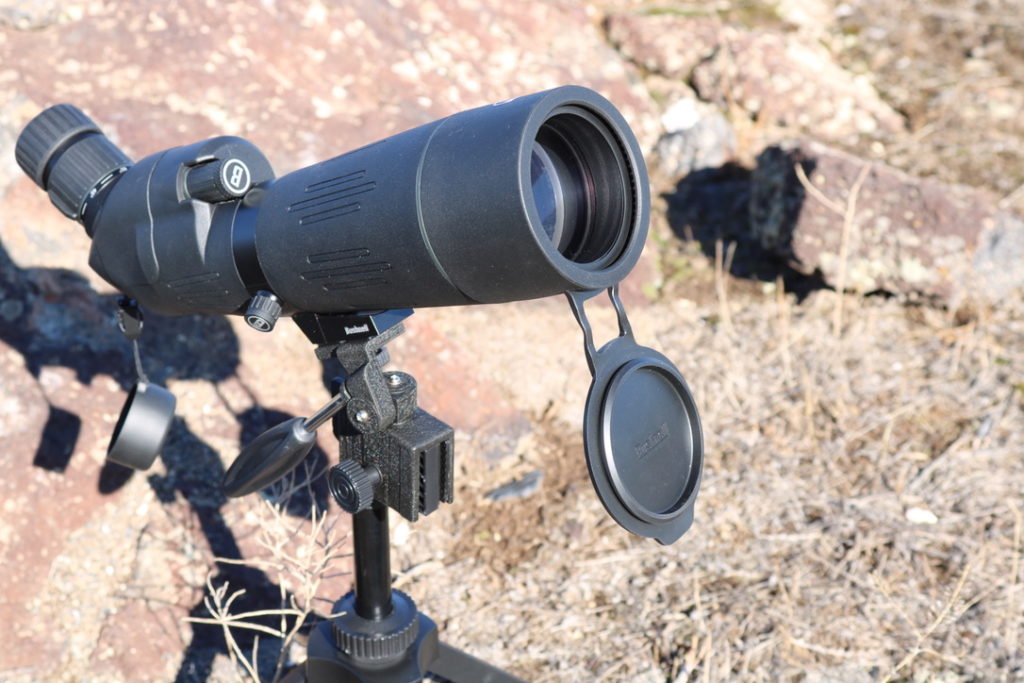 The only test I could think of that was fair was to judge the Prime Spotter next to something that I knew was awesome. This is actually how we picked our new spotting scopes in the Army. Order one of each, set them side by side, and everyone gets a vote at the end of the day. So I set the Prime up next to my Night Force TS-82, for a contest of who can read the tire contract the furthest away. 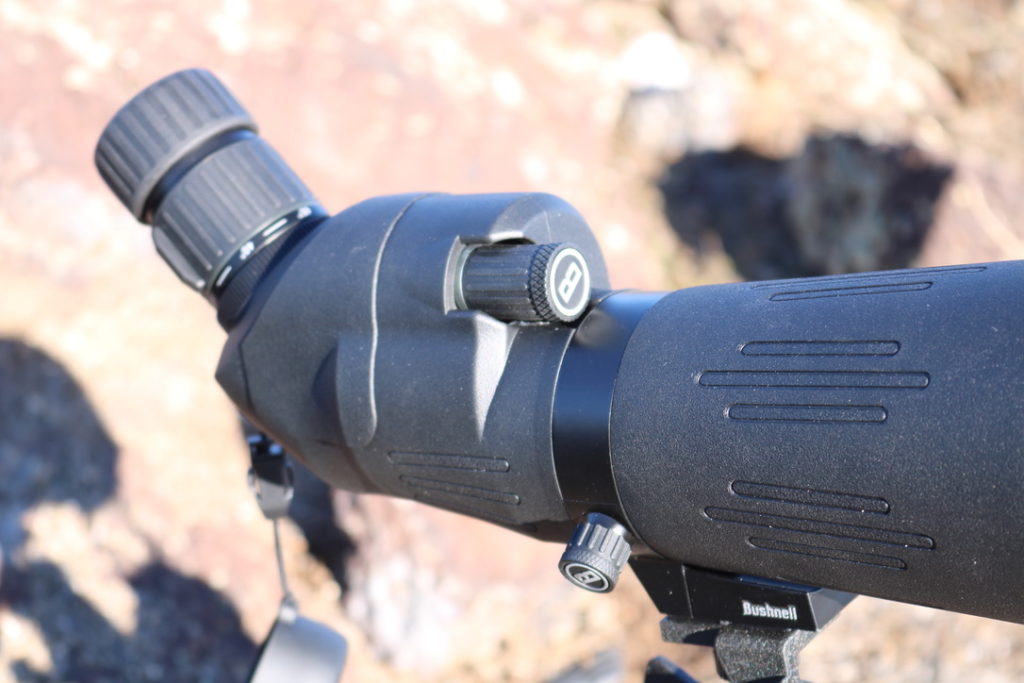 The focus was easy inside of 1000 yards.

Is that really a fair test? No, not even close. The TS-82 is a $2600 spotting scope, meaning it costs 6 times what the Prime does. And don’t judge me for having a Gucci spotting scope, I won it at a 3 Gun match years ago. Mrs. Martin would murder me dead if I spent that on a piece of glass and probably slow for good measure.

To judge the clarity, I actually did staple my tire paperwork to a target and did a walk back to see where the Night Force overwhelmed the Prime. I’m not sure exactly how scientific my test was, but it did work. Both, at 60 power were capable at 75 and 100 meters. At 120 meters, the Prime finally ran out of the ability to focus. It was close, but the Night Force did deliver at that range. 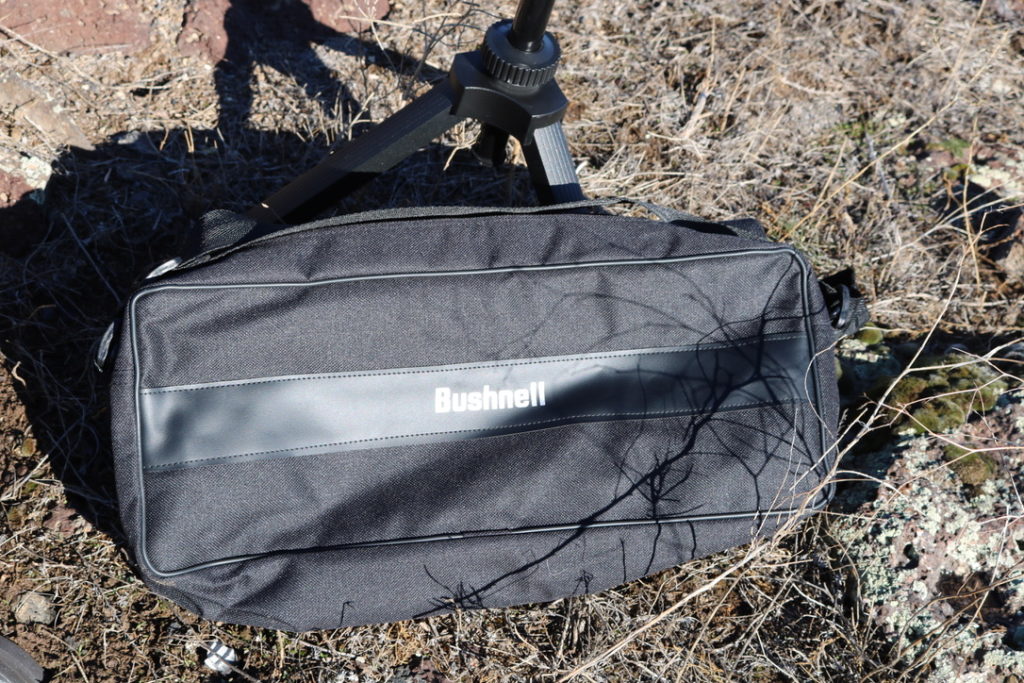 Real world, what does that mean? Well, if you are prepared to spend close to three grand for a spotting scope, it will outperform the Prime is one thing. But aside from that, I was very impressed by the Prime. For the price tag of $431, I find its clarity amazing. Spotting vapor trail at 450 meters, and recording it on my phone, was no problem at all. Using 224 Valkyrie, which isn’t exactly the biggest bullet in the arsenal. After field testing, I would call the Prime completely adequate for spotting 1000 yards and in. It would work further in a pinch, but optical clarity is going to start playing a role beyond that. 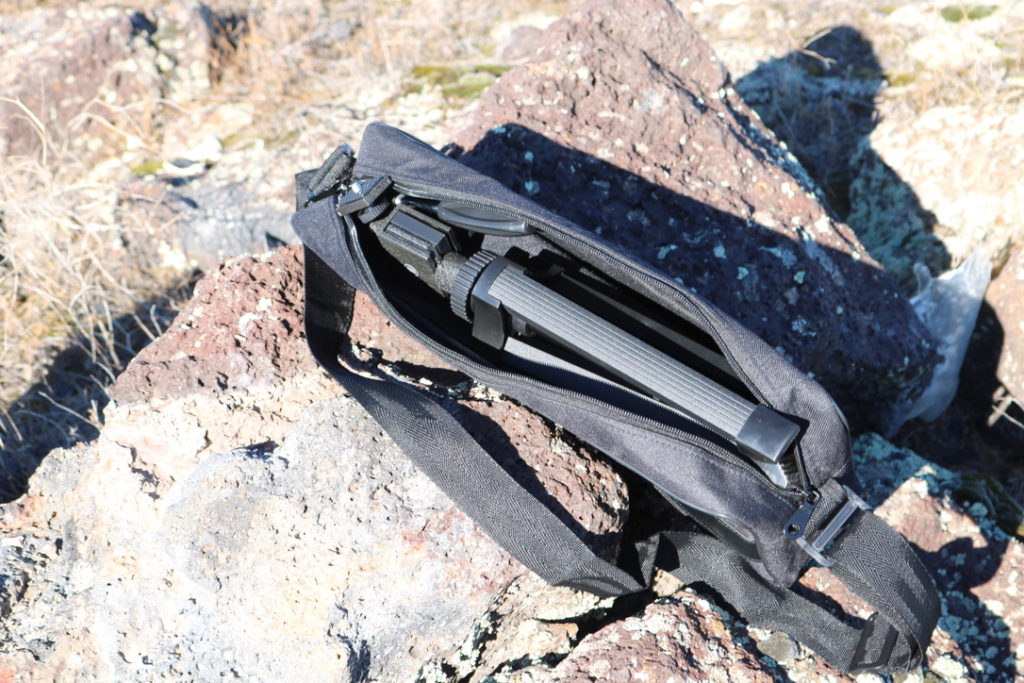 Scope and tripod in the soft case.

All in all, I could not be more impressed. If you need a spotting scope to hold you over until you hit the power ball, this one is pretty hard to argue with. And since it is Bushnell, they have you covered in the next three price categories as well.