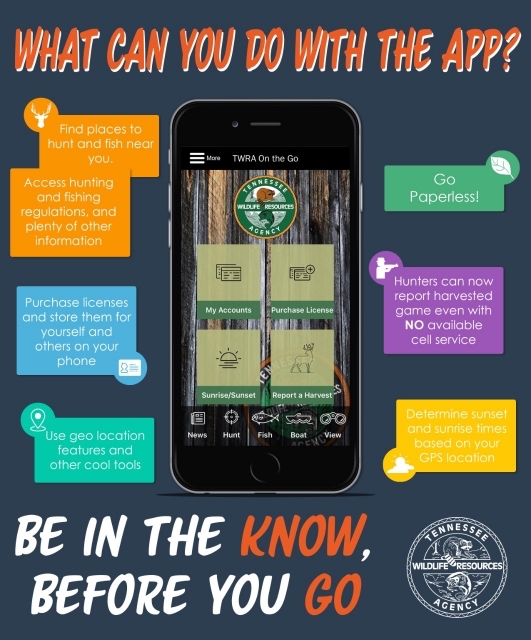 Get the TWRA On the Go App.

The 2019 Spring Turkey season kicked off Saturday, March 30 in The Volunteer State.

Here’s what you need to know to participate. First, a hunting and fishing combination (Type 001) and a supplemental big game license or sportsman license are required.

Hunting hours are 30 minutes prior to legal sunrise and legal sunset. You can find the exact times via the Tennessee Wildlife Resources Agency (TWRA) On the Go App.

Hunters can use a variety of equipment including shotguns using ammo loaded with No. 4 shot or smaller, longbows, recursive bows, compound bows, and crossbows. Sighting devices such as scopes are permitted provided they don’t use artificial light capable of locating the birds.

“Bag limit is one bearded turkey per day, up to four per season,” says TWRA. And, hunters should check game when they harvest a gobbler. One can use the TWRA on the Go App or visit GoOutdoorsTennessee.com to check the bird.

The best place for hunting toms is Middle Tennessee. “Nine out of the top 10 county harvests came from mid-state,” says TWRA, with Maury County leading the way, Green County coming in second and Dickson County in third.

“Turkey hunting in Tennessee is fantastic,” said Ed Carter, the TWRA’s executive director, in a press release obtained by GunsAmerica.

“We have abundant public land, one of the longest seasons in the southeast and one of the biggest bag limits and plenty of turkeys,” Carter continued. “It’s a great way to experience the outdoors, especially this time of year.”

Total harvest numbers are expected to top 30,000. The season continues through Sunday, May 12. Tennesseans can find out more about the Spring Turkey Season in the 2018-19 Tennessee Hunting & Trapping Guide or by visiting www.tnwildlife.org.