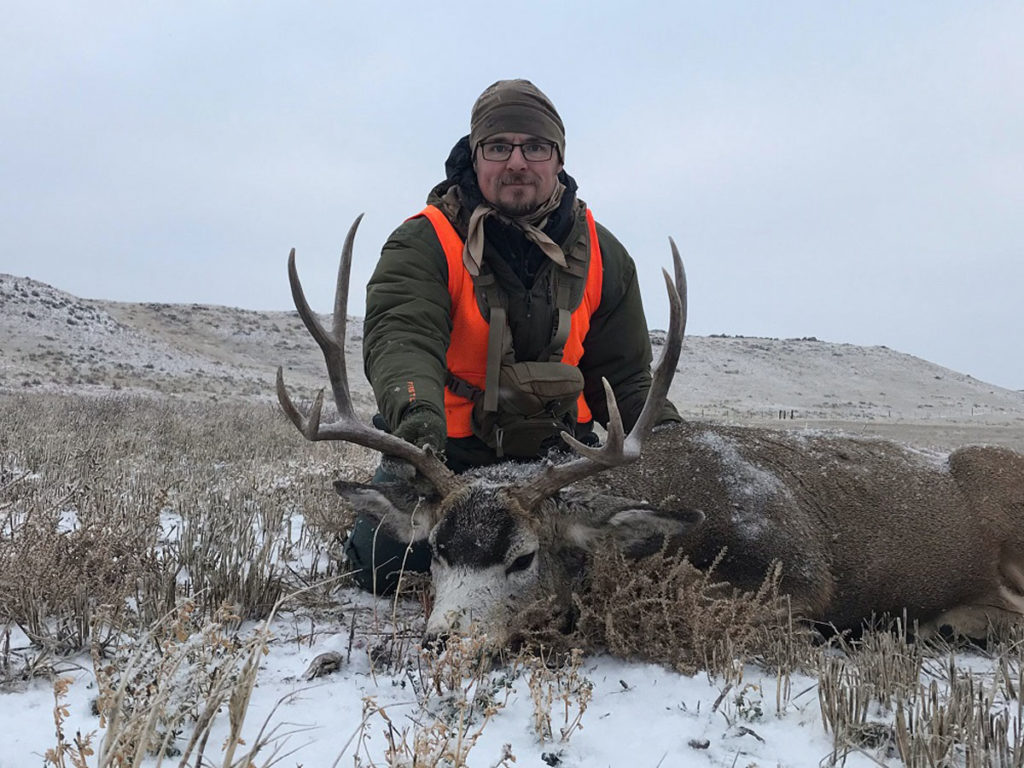 The author and the hard-earned birthday buck.

“If it was easy, everyone would do it.” That was the thought going through my mind as I woke up to my alarm clock obscenely early yet again. The coffee pot was gurgling away as I dressed in the dark and tried not to wake my sleeping wife. I slipped out the door and headed down the highway, my thoughts on the full day ahead but anxiously awaiting the end of the work week so I could focus my attention on the upcoming weekend. Starting work extra early and getting those responsibilities taken care of would allow me to meet my father and a hunting buddy to take full advantage of the mule deer rut that was in full swing in eastern Montana.

This would be our second trip in less than a month. The first trip was opening week of the season and warm weather had made for tougher than average hunting but had yielded glimpses of several bucks that had to travel only a short distance to put them in a spot where we could hunt them. With the rut taking hold of these mature deer’s minds, we were banking on the fact that at least one would slip up and give us an opportunity. We had three days to make it happen before the long drive home. My dad would be turning sixty years old that Saturday and, with my mom’s blessing, we were going to make every minute count. Dad had assured me he couldn’t think of a better way to spend his birthday than hunting so we put the spurs to my pickup and headed east. 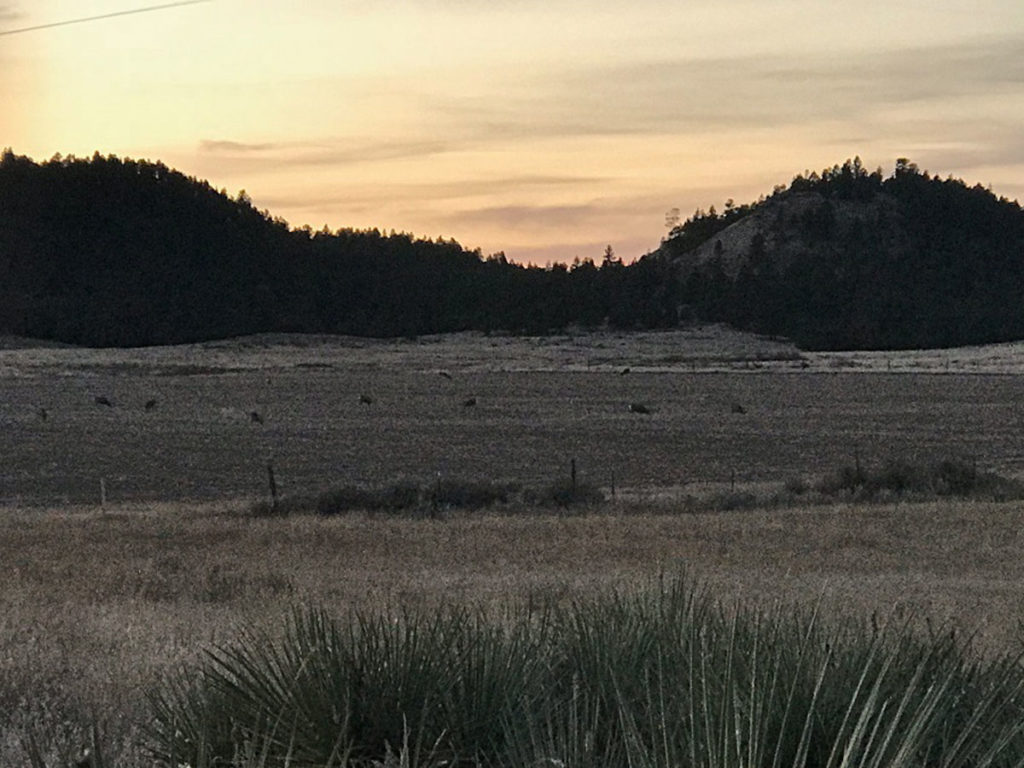 Eastern Montana has its own unique kind of beauty.

With the majority of two days hard hunting down and no big bucks spotted, we were wondering what we needed to do to turn our luck around. The weather hadn’t been doing us any favors; with mild temperatures and no snow, it seemed as though the deer were content to stay bedded most of the day and move during the night. The second evening a front blew in, bringing with it the temperature drop we had hoped for as well as a wall of snow pushed by heavy winds. Only seeing a handful of deer in the storm had me hoping the morning hunt would be a different story. We had our weather, with any luck the wind would lay down and leave us with one final cold and snowy day to hunt.

That evening, with clothes and boots drying, letting the warmth seep back into us, we made a hail mary plan for the morning. Ryan would drop Dad and I off in the dark, leaving us plenty of time to work towards a secluded corner of feed that we had seen deer in previously, our hope being the storm front had gotten the deer up to replenish calories needed for the cold weather. We walked slowly in the dark, the blanket of fresh snow adding visibility to the cold, clear morning. As the grey of first light crept up on us, we could start to make out deer in the corner we were headed to. With the light growing stronger, the blocky shoulders and chest of a mature buck were clear through the binoculars. Not being able to see antlers yet, I told Dad if he was as mature a buck as we thought, I’d like to try a stalk on him. Details slowly revealed themselves to us as the sun crept towards the horizon. The buck was clearly a year class older than the other bucks he was hanging out with so we planned our move. The deer were feeding under a small knob, if we could get there before they moved off, we might have an opportunity at the buck we were after.

I eased over the rise of the knob and confirmed with Dad he was ready, the trigger breaking overtook me by surprise and the solid hit was confirmed by a “whump” traveling back to my ears through the crisp morning air.

Watch the Hunt Below

This buck wasn’t one of the deer we had seen earlier in the season. He wasn’t one I thought of while waking up early to go to work and carve out enough time for one more deer hunt before the season ended. He didn’t carry the mass or width that make mule deer hunter’s jaws sag open, but he was special. My father turned sixty years old that morning and we were together, doing what we love. 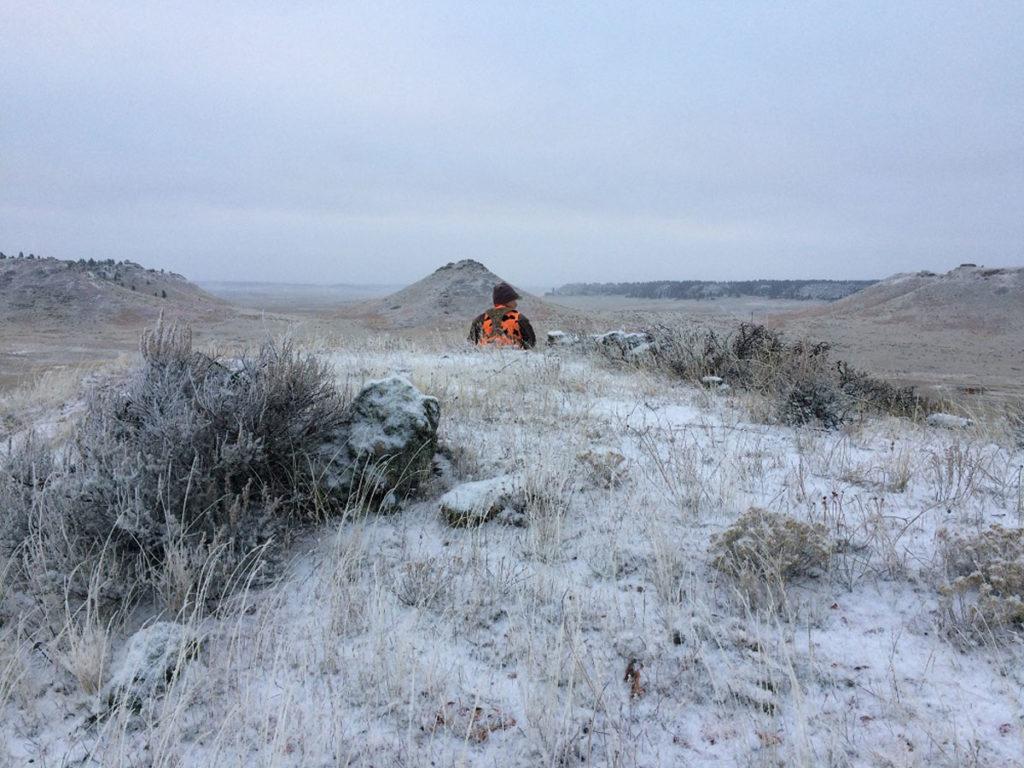