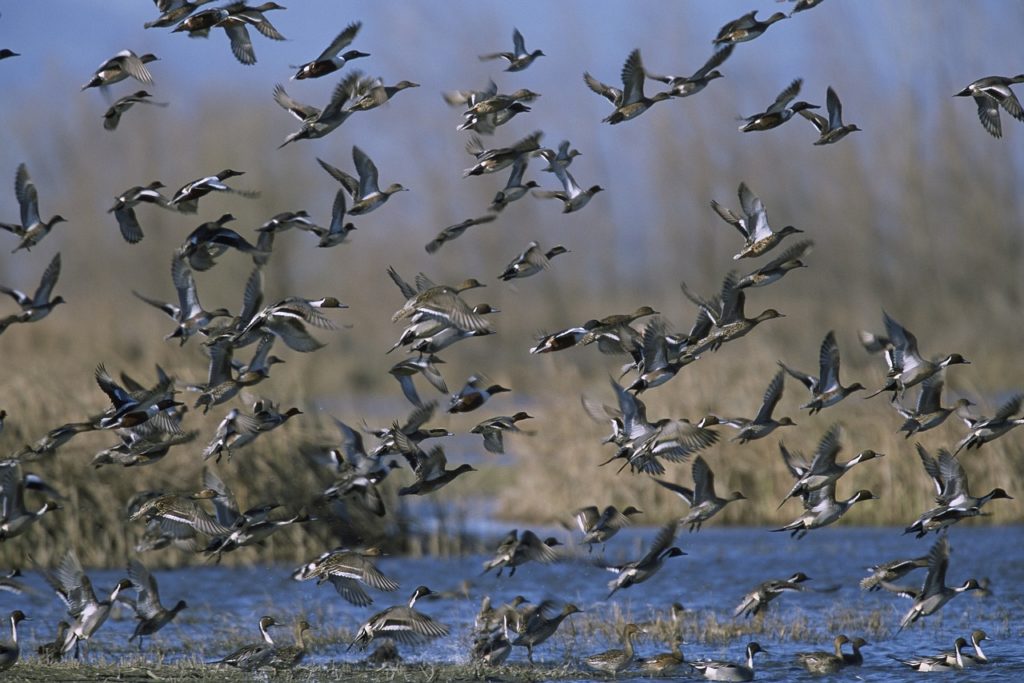 Mixed Bag – So many birds migrating it was indeed a spectacle. By the end of the sixth day of migration, over two million ducks passed over the Midwest.

I am sort of a weather nut.  I watch it and appreciate the changes that occur each season.  Global warming though has arguably influenced the past several years.  Warm fall weather well into November with then frequent freeze-ups provides little consistency.  Most of us know what the weather does to ducks and geese.  It pushes them south in the fall.  Early season hunters get the first round of migration while those further south wait patiently for their chance.  In spite of the weather, we have had record hatches across the prairies of Canada, but unfortunately, those ducks in some flyways do not show up.  Paper ducks as some refer to them, especially when they are so elusive.

I thought readers might like to hear about one heck of a migration that occurred in 1955 and really given the weather we are seeing now, could occur again.  Snow in Alberta, North Dakota and South Dakota, falling temperatures, huge fronts and all the pieces needed to move ducks in 2018.

The year 1955, was the official beginning of the United States Fish and Wildlife Service migratory and census data collection.  Two important efforts began cooperatively creating the largest data set of any species in the world; the spring Waterfowl Breeding Population/Habitat Surveys using aerial surveys across 2.1 million acres and summer ground banding operations to better understand migration patterns of waterfowl.  Another significant waterfowl event occurred that fall and to this day, few if anyone has experienced a migration as concentrated as the one in the fall of 1955.

It was indeed a perfect storm occurring between October 29 and November 3, 1955 primarily in the Mississippi Flyway.  Some readers may remember the article by Illinois native Frank Bellrose and others, as A Spectacular Waterfowl Migration through Central North America (1957).  My father was one of those that observed this migration and was included in the article.

Triggering the migration were several fronts and pressure areas starting with a deep low-pressure area over northeast Wisconsin and a fast-moving cold front, stretching towards the east coast from a warm low-pressure area southwest of James Bay, Ontario midday 30th of October.  Throughout the migration blizzard conditions and high winds existed in much of Alberta, and Saskatchewan.  Between October 31 and November 1, a cold front from the low in Wisconsin stretched south across much of the Midwest freezing rivers, lakes, and wetlands, while the warm low-pressure front was pushing toward the west edge of Hudson Bay.

On November 1, North Dakota was reporting observations greater than they had ever seen.  Reports, like most to follow, included that of the over 100,000 birds seen in North Dakota, a high percentage were mallards and all were in a parade southeast.  In some areas, reports provided of 1,000 ducks per hour and most flying at altitudes well within the range of hunters.  November 2, a Wisconsin pilot reported an hour flight time with ducks surrounding their view.  Iowa hunters along the Mississippi River reported a constant flight of ducks from sunrise to just before noon, unlike anything they had ever seen.  Illinois was covered in a million new birds flying at 2,000 feet, of which most were mallards.  Missouri was reporting large flights of ducks and geese with 75 or more flocks counted per hour.

November 1’s weather was showing a low pressure over Wisconsin had shifted west of James Bay and a low-pressure trough west of Hudson Bay near Churchill was sitting tight with south winds.  A new low was circling North Dakota and a huge high-pressure ridge was forming over the Yukon dropping temperatures with a Continental Arctic air mass and pushing even harder on waterfowl by November 2.  Observations in Manitoba that the largest migration ever seen supported as many as 215,000 ducks passing over between 10:00PM and 4:00PM on November 2.  Across the border, there were reports of 1,000 ducks per hour.  The first winter storm of 1955 was underway dumping snow across Saskatchewan, Manitoba, Ontario, North Dakota and Minnesota and ducks were on the move.  At the same time, Missouri still had temperatures in the 60’s up until afternoon November 2, then, within hours had snow and sleet falling especially along the Mississippi River. 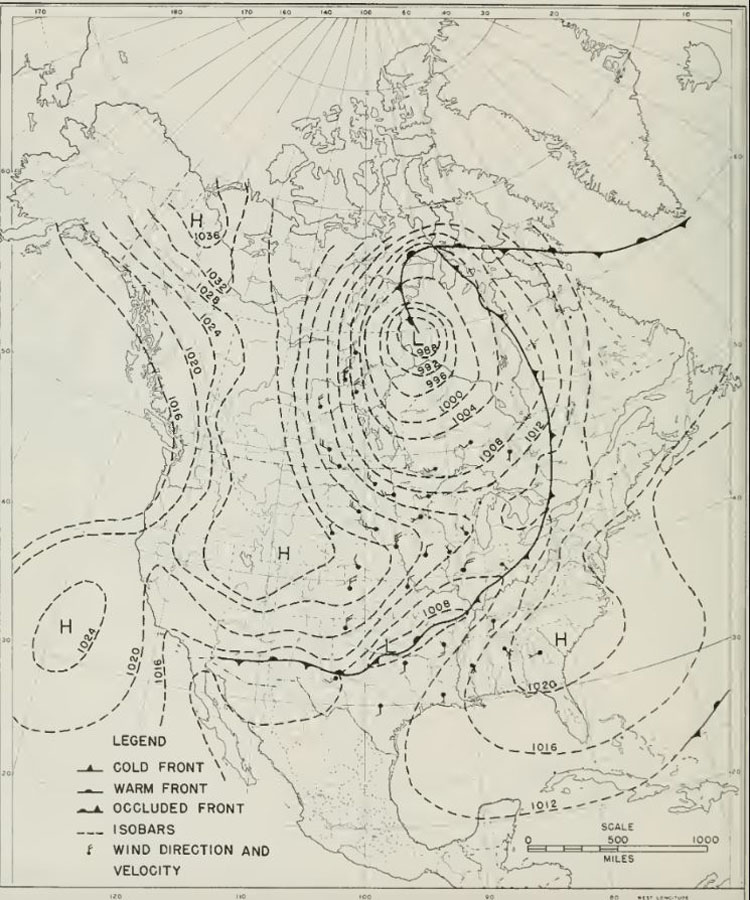 The November 2 weather map shows the Yukon high-pressure Arctic blast that set the migration into action.

Wednesday, November 2, a front was moving to the northeast from Arizona and New Mexico and arrived into Illinois about midday.  As temperatures dropped, the low-pressure west of Hudson Bay began moving east creating a strong south wind. This wind coupled with the east moving high-pressure area over Illinois also generated south flowing winds (gear-effect). With the weather changing rapidly, the sky was obscured with heavy clouds and snow.  Nonetheless, birds followed perfectly down eastern Missouri and the Mississippi river with few departures.  It must have been incredible seeing so many birds migrating at altitudes as low as 100 feet!  Observations along the Iowa and Illinois border, down through Missouri all occurred mid-morning and diminished by late afternoon of perhaps a million ducks.  On November 2,  along the Illinois border, the Mississippi River flight line was providing a spectacular show with estimates of 600,000 to 900,000 mostly mallards, and starting to spread slightly to the east and west.

It is important to note, that this migration did not necessarily follow what would be obvious to most; that birds would take advantage of south winds.  In fact, the winds with the storm of 1955 were actually more north and west, than south as they were through the later days of the flight into southern Illinois.   Not until November 2, did winds allow for a free ride south.  Researchers believe it was the high-pressure ridge and Continental Arctic air pushing down and into the United States that started the mass migration in late October but as it developed it perpetuated the migration into early November. 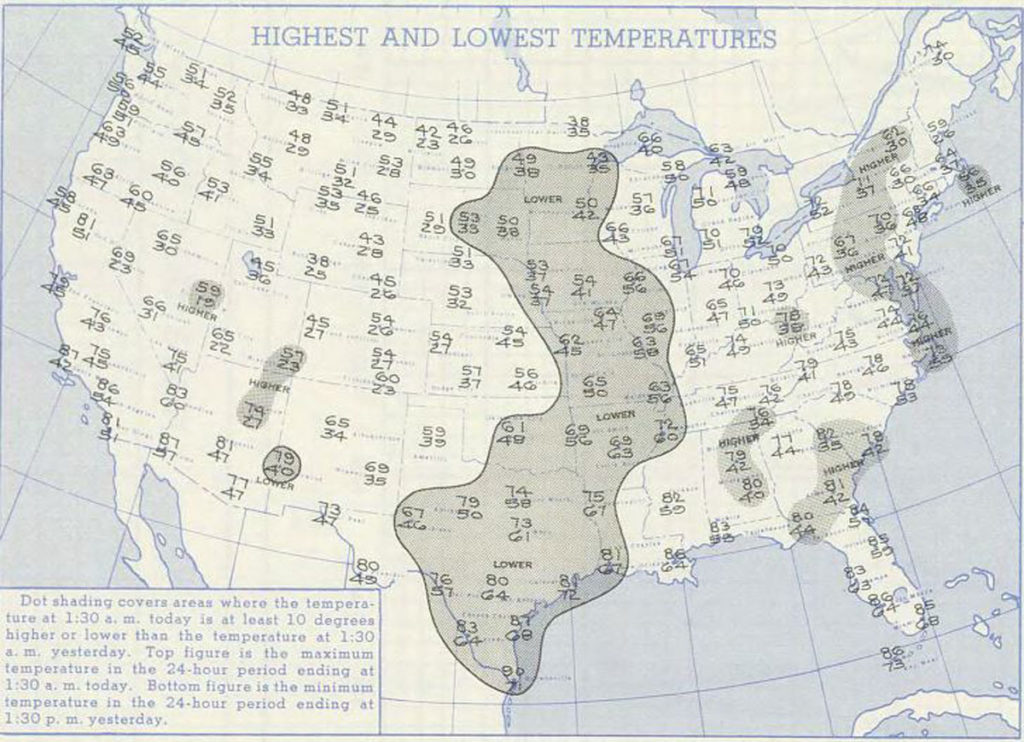 October 31 temperatures – Weather on the 31st was mild and remained that was in the Midwest until November 4. Note the relatively warm weather along the Minnesota border.

As the storm was creating blizzards and temperatures were dropping, ducks continued to move.  Within three days, the eastern prairies of Canada were void of waterfowl.  Birds moved with the wind and weather south from Saskatchewan, Manitoba, and Ontario. 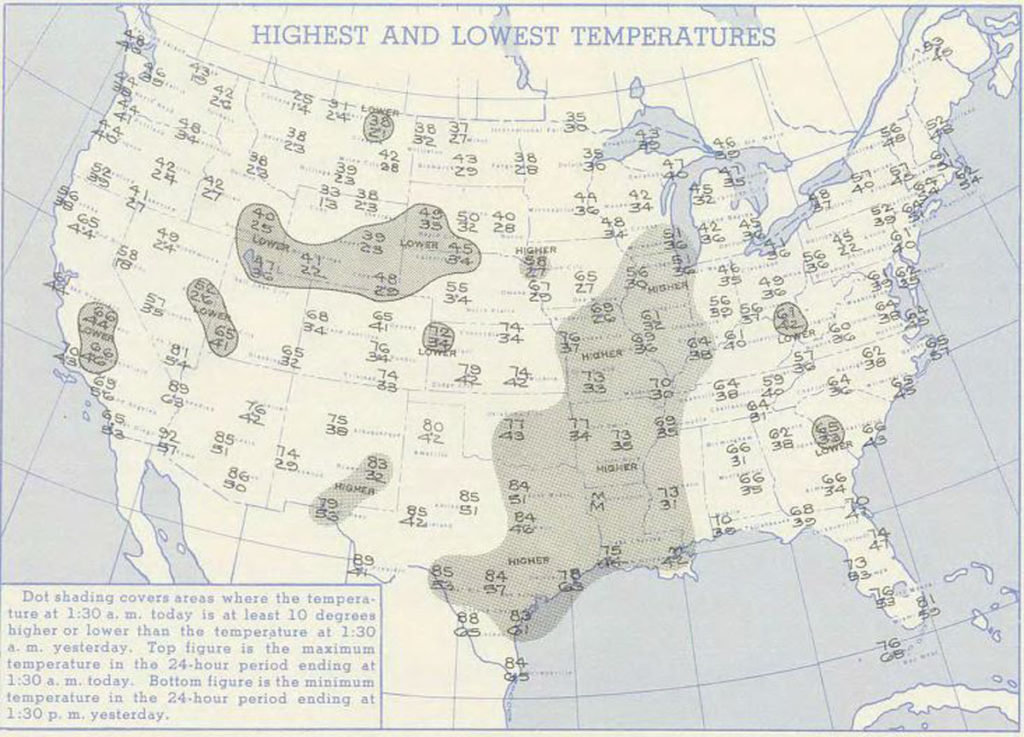 Nov 1 temps – The cold front is starting to move south and easterly along the Mississippi River. Most of North Dakota, South Dakota, Minnesota and Wisconsin have cooled off. 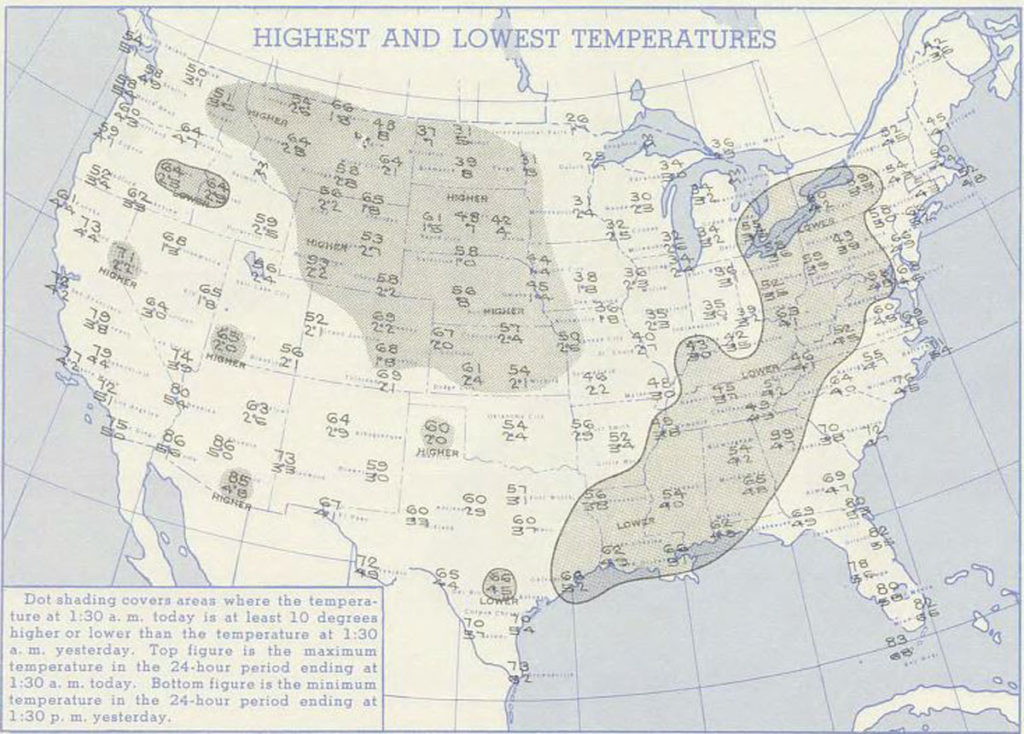 Nov 4 temps – Clearly, temperatures are dropping across the Mississippi Flyway. Lows in Northwest Missouri are in the teens.

many other states in the flyway comparing the flight to the great Armistice Day storm that occurred November 11, 1940. Mallards, scaup, teal, ring-necks, divers, pintails, ruddy ducks, shovelers, baldpates, black ducks, gadwall, redheads, canvasbacks, and coots streamed south at altitudes ranging from 100 feet to 2,000 feet numbering 750,000 or more in some groups.  Tennessee saw their largest flights in ten years along with Arkansas, and Louisiana.  Strangely, Kansas reported little or no migration these four days. 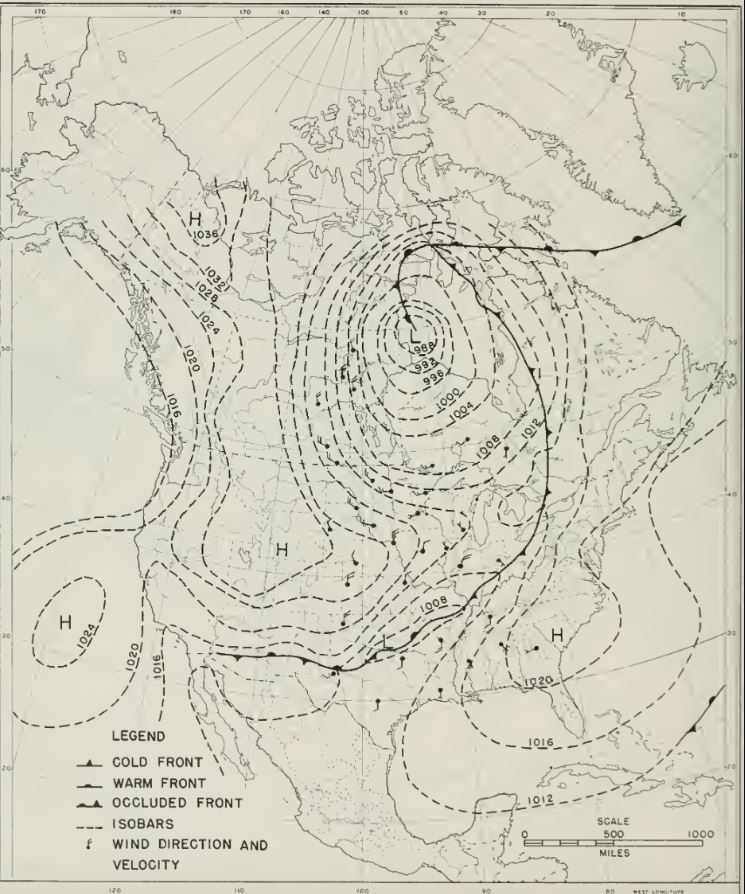 By November 2, the move was on for the Dakotas, Minnesota, and states along the Mississippi River.

Those days in October and November of 1955 were remarkable within the Mississippi Flyway.  In total, refugees from South Dakota to Louisiana swelled to almost 3.5 million birds nearly tripling their numbers in just a few days.  The lower Illinois Valley gained nearly 500,000 birds while Louisiana statewide grew by over a million quickly in those six days in 1955.  In all states mallards were the predominant species.  1956 and 1957 were also considered high migration years, but nothing like the flight of 1955.  The weather was the major player and the fronts, pressures, winds, and temperatures lined up to create a perfect migration storm. 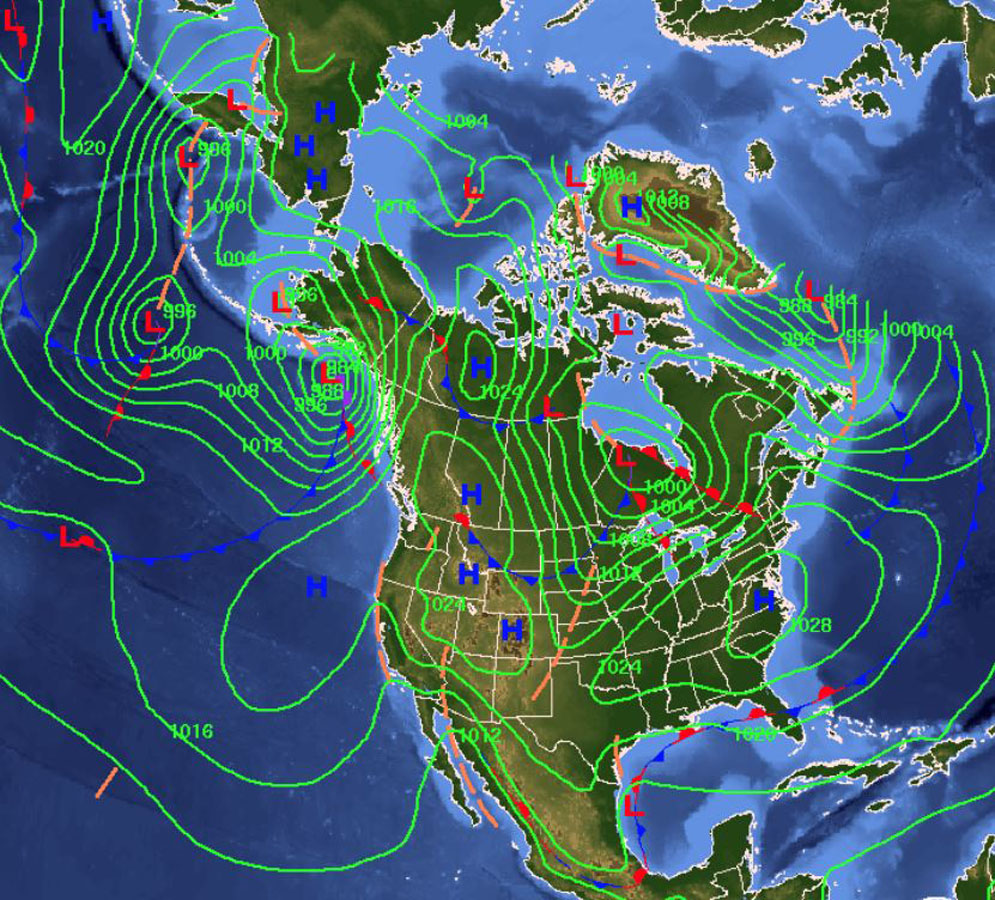 Mid October 2018 – I may be an optimist, but I am really hoping for a grand migration all the way to the coast. 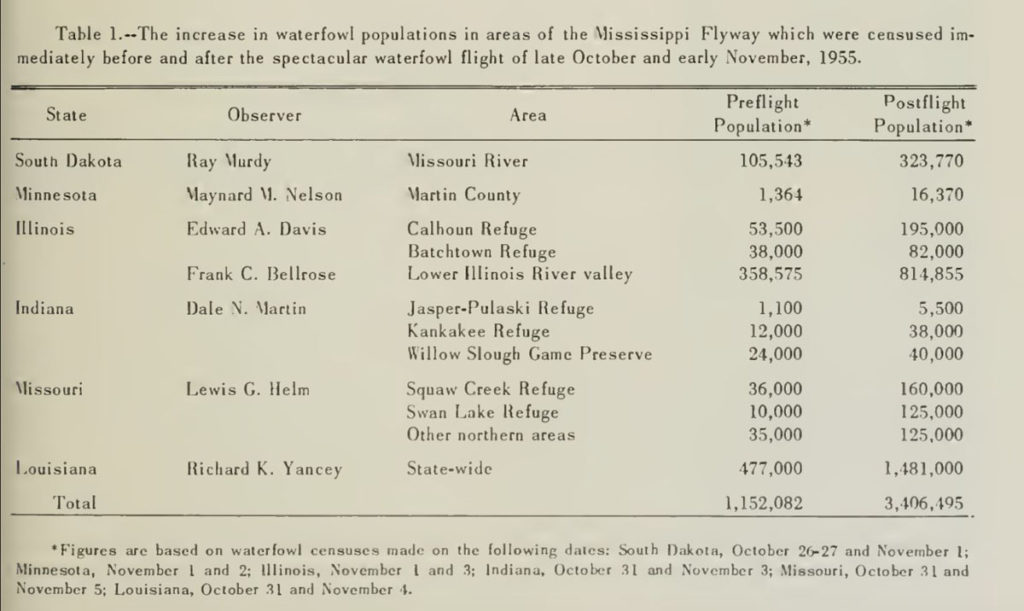 These images are from the original article published in April of 1957 and NOAA’s database of weather. This figure shows the extremes of the population over the 6 days. Over 2 million birds migrated in that short period. Still one of the largest in history.

It is now 2018 and flooding, cold fronts, and forecasts of more are making for perhaps another perfect storm.  High pressure in the northwest, colder temperatures from the northwest into North Dakota, South Dakota, Minnesota and Iowa, warm fronts out of Hudson’s Bay, and wind pushing south.  Who knows what this fall might bring but be sure to keep your eyes on the sky so you can be a part of perhaps another spectacular migration.

***Shop GunsAmerica for your next waterfowl Shotgun***

Previous post: Scalise Explains to Whoopi Goldberg of ‘The View’ Why He is Still Pro-2A