We have all looked in the rear-view mirror while driving at 3:30 in the morning on the way to the local parking lot, only to get that sinking feeling in your gut when you see headlights. This is when you know that the race is on and your day just went from exciting and hopeful to competitive and rushed.

I recently had this sinking feeling on the way to the spring turkey woods. I had roosted two nice gobblers the night before, which I had been hunting for 4 days and I felt that this was the day everything would finally come together. The competition was scarce throughout the week, but I was hunting on a Friday and expected to see other hunters.

The truck that was following me down the dirt road pulled into the parking lot. He did the “slow roll” past my truck and instead of parking right next to me in the designated parking lot he parked as close to the public access gate that he could get. At this point, I went into my instinctual public land panic. I found myself racing to put my waders on (thanks to the nearby river that I might need to cross) anxiously stuffing the decoys in the bag and packing the shotgun just to look over to see my competition doing the same thing.

I knew his goal was the same as mine, be the first one on the trail. At this point, I decided to do something that I had never done before, walk over and talk to the other hunter.

I introduced myself while asking where he was hunting and what he had seen. He explained to me that he was going to hunt “way back in there”, I saw this as an attempt to get around me and hit the trail. I told him that I had been hunting in this area for 4 days and I had roosted some birds the night before and I wanted to make sure where he was going so that I wouldn’t mess up his hunt.

After a short discussion, we quickly realized that we were after the same birds. At this point, I was waiting for him to make an all-out rush for the gate and leave me in the dust. Before he could give me a reason why I should try to hunt somewhere else, I asked him if he wanted to hunt with me.

I said, “Look, I have a bag full of decoys and I know exactly where these birds are roosted. Instead of us calling over each other all morning and ruining the hunt, I know there are two gobblers in there and I think we can have a chance at them both.”

I was astounded by his answer, “Yes.” 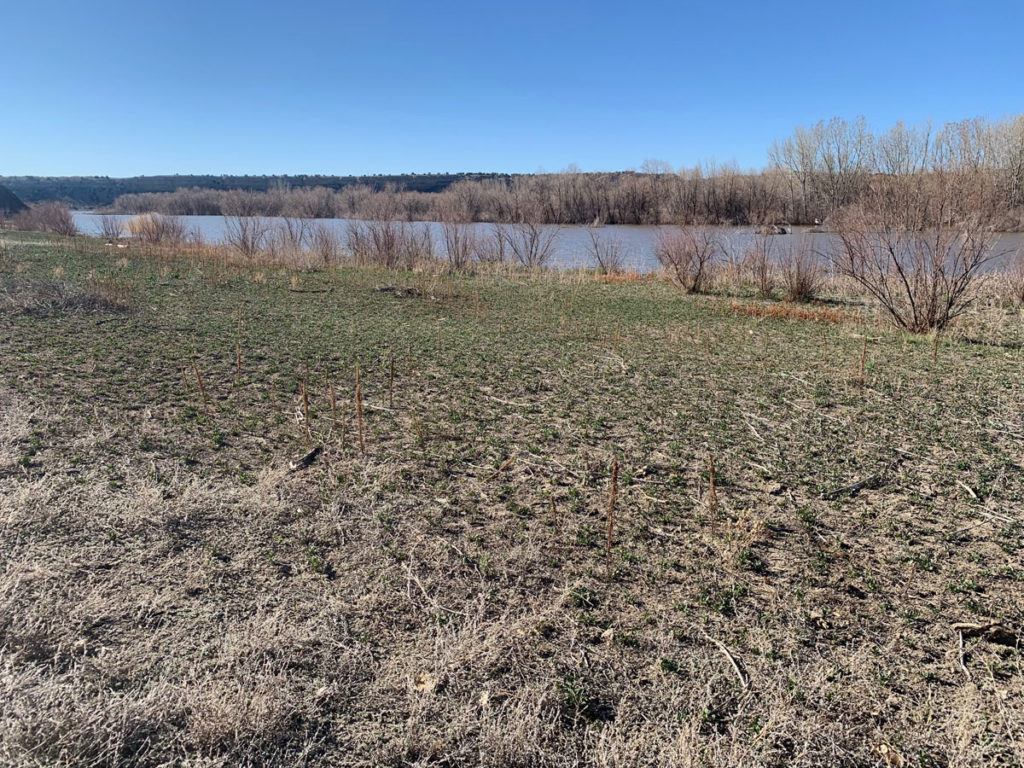 The river bottom that I haunted, the riven in the background is a curse and a blessing. It made it hard for hunters to chase birds, but with the right equipment, it was a great place to hunt.

We set out on the trail and we quickly started to make some small talk as two guys do when they are walking in the dark. I learned a couple of interesting things as we chatted under the light of a full moon. One, he had forgotten his binoculars in the truck while trying to get his stuff together and get ahead of me. Two, he was a fairly new turkey hunter and was a novice caller. Perhaps it was this fact that opened him up to the idea of hunting together, but either way I felt like this was a new experience for both of us.

We soon located the turkeys while the moonlight still offered us some concealment. We made our way to a small field about 150 yards from where the birds were roosted. As the morning light cast a glow on our decoy spread, the birds pitched down from the roost and it seemed that they were heading our way.

I offered several soft hen calls, which fired up the two gobblers. They almost couldn’t help themselves, gobbling over my call and each other. As they made it into view of our decoys, just slightly out of range, I heard a hen call. This, however, wasn’t the kind of hen call that you want to hear. It was the kind of hen call that every turkey hunter knows, it was coming from a box call.

The birds were almost within range for both of us to take a shot. I was trying to get them worked up enough to run in and fight my decoy, but these public land birds took their time, slow and easy.

Just as it seemed that we might get a crack at a gobbler before the other hunters came up the path, I heard one of the hens in the group putt and alarm yelp, and that was it. All the birds lifted their heads and off they went.

It seemed that the very thing that I was trying to avoid by hunting with this stranger had come to fruition despite my greatest effort.

Both of us were disappointed and discouraged, although the birds didn’t all out fly off, they were spooked and the woods fell silent. We sat there for a few minutes before we stood up, went over and picked up the decoys.

Just as we hit the main path I heard a far-off gobble. It was hard to narrow down where it was, but I could tell that it was coming from somewhere on the other side of the river. I had waders on in case this situation presented itself. The other hunter did not so we shook hands as I told him that I was going to cross the river and chase that gobbling bird. He thanked me for a great morning hunt and we parted ways.

I managed to get across the river, which always proves to be a more difficult task than it first seems. The other side of the river was very similar to the side I had been hunting, a beautiful cottonwood bottom perfect for turkeys. I called several times, with no answers. I paused by a tree to watch a whitetail doe stomp off into the woods and was just enjoying being in the spring woods. It was approaching that time that every turkey hunter dreads, that time between noon and two when it seems like every bird in the woods has disappeared.

Just as I was about to give up, I saw something that I did not expect to see in a cottonwood bottom, two buck antelope. I thought this was strange and stood there as they fed along, and as antelope do, they seemed to see something that spooked them and they tore up the hillside. I looked in the direction of what spooked them and saw a hen turkey running up a drainage. I thought this was interesting, so I decided to cut a wide track around her and see what was up on top of the bluff.

No sooner did I crest the top of the hill when I heard a thunderous gobble, the kind that is no doubt close. I took out my Vortex binos and peeked up over the rise to see the very tips of a turkey fan.

I quickly found a place to sit with some cover. The gobbler was gobbling his head off in a group of hens that appeared to be finished with him. I let out a few soft yelps and barely finished the first note before he cut me off with a gobble.

That’s all it took and he was on his way. I could see his bright red head making its way through the brush toward the place I had chosen to hide. I was so caught up in watching him that I failed to see a hen that had made her way around the opposite side of the brush. As I raised my gun she spooked and flew off the bluff. 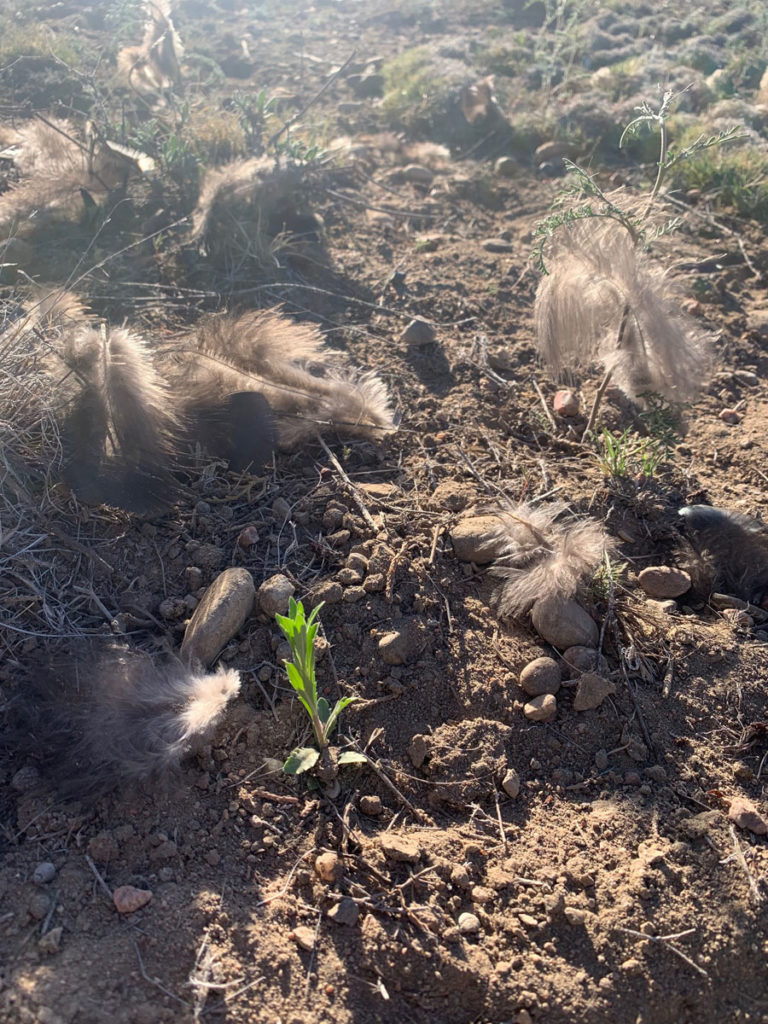 A great sight when you let the Federal Premium roll out the barrel at a gobbler.

I thought I had been foiled again. I waited for what seemed like forever with no sign of the gobbler. Then I felt the drum and spit of a turkey. I would say heard but anyone who has been close to a bird that does this knows it’s more of a feeling than a sound. You almost have to tell yourself that you actually heard it. Just then he appeared, with his head facing away at 20 yards. I again made some soft hen yelps and he turned, stuck his head up in my direction and I took the shot.

I managed to put the Federal Premium TSS on the money maker and put the gobbler on the ground. I had filled my over the counter-public land Colorado turkey tag. 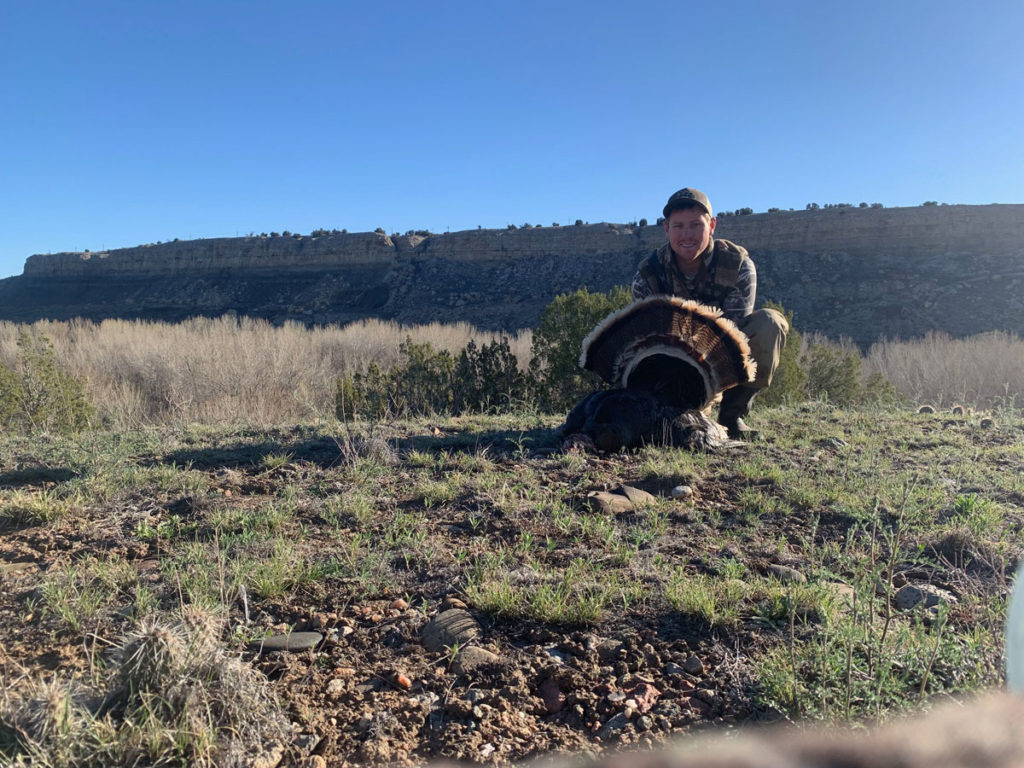 It may be a coincidence or my misplaced faith in Karma, but I truly felt that I had been rewarded for how I had handled the situation in the parking lot that morning. So often we selfishly try and guard our public lands for ourselves and we forget that we share it with every other hunter that has a license and pays into wildlife conservation. I don’t know if these two events are really connected, but next time you are racing down a dirt road ridiculously early to your hunting spot, take a deep breath. When you see headlights behind you, take the time to talk to the person that likes to do the very same thing you do. They might surprise you and you might end up with a great story. 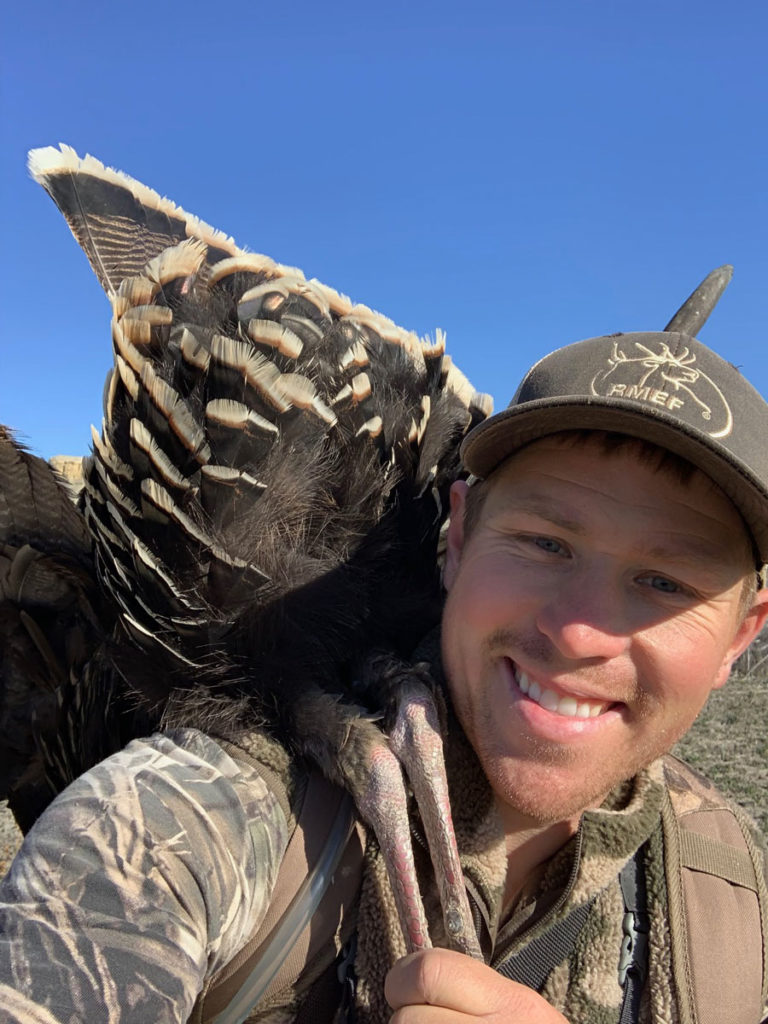 A heavy but rewarding walk to the truck with a nice bird.