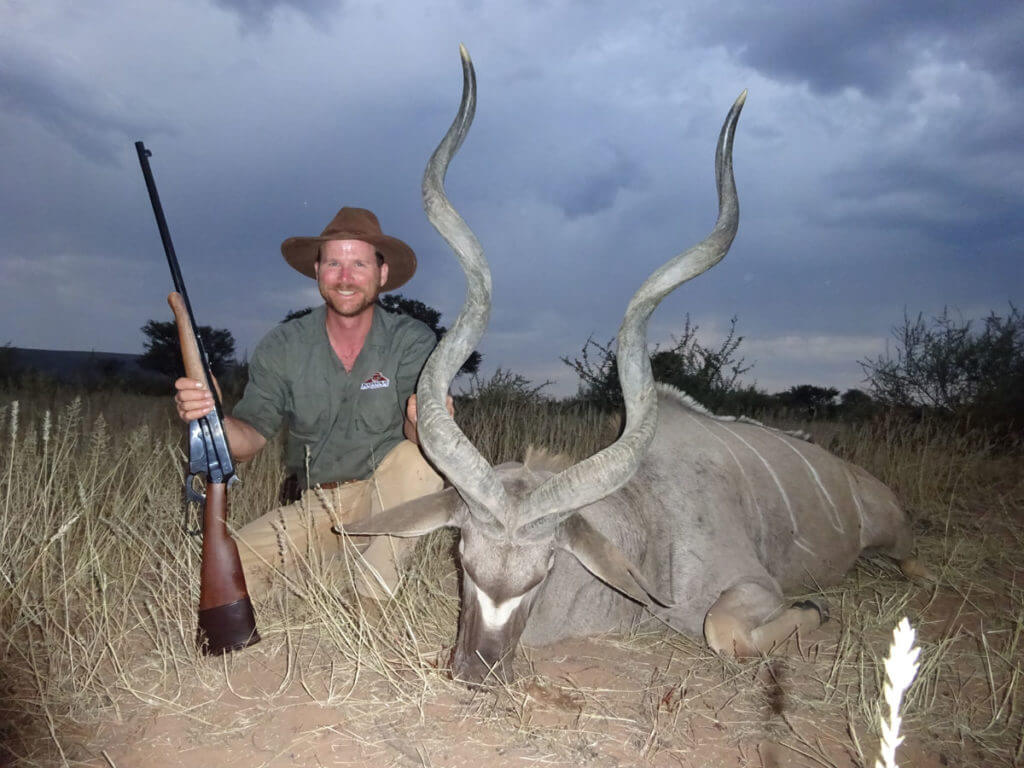 The author with his kudu bull.

Dust mingled with the scent of distant rain in my nostrils, rousing a subconscious sense of excitement known only to those who dwell in the desert. Africa was thirsty, waiting for the rain like an alcoholic waits for his next drink. Kudu moved ahead of us through the thorn veldt like so many wraiths, an old bull’s long spiraling horns visible one moment, gone the next. Fingering the sun-heated Winchester ‘95 in my hands, I glanced at my PH. Crouched and motionless, he waited. Towering black clouds covered the face of the sun as thunder rumbled in the distance. The bull stepped toward an opening in the bush, and the PH moved forward, cross-sticks in hand. 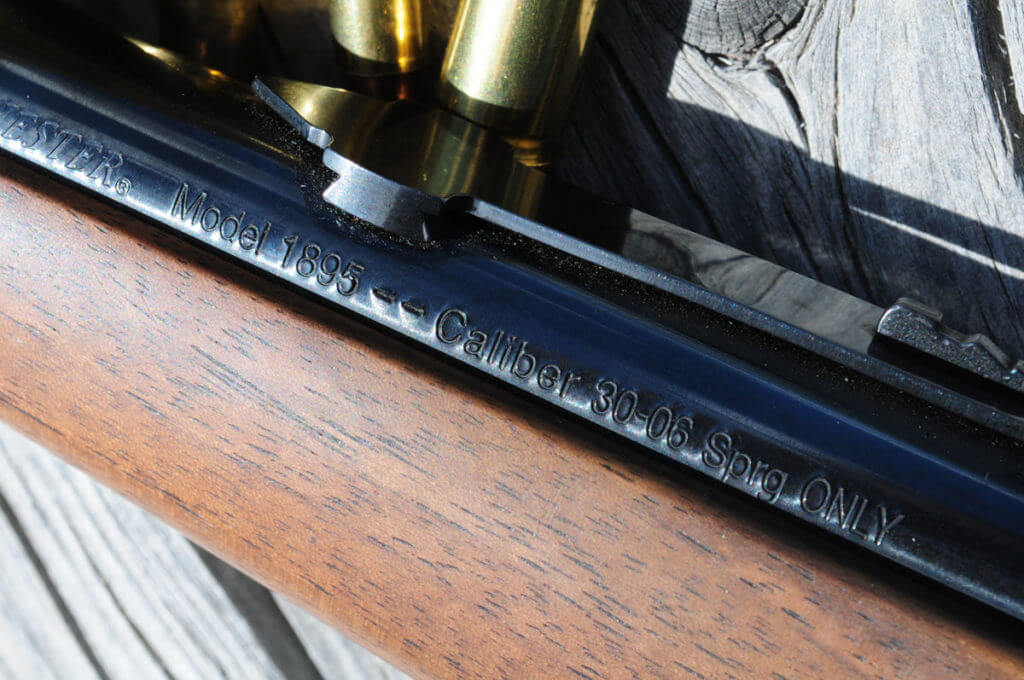 The Winchester model 1895 was the last lever-action designed by legendary firearms designer John Browning, and the first Winchester lever gun to utilize a box magazine instead of the then-universal tubular magazine. This eliminated problems with loading pointed-bullet ammunition in tubular magazines–each bullet creating the next cartridge in line’s very own firing pin, all set to send the shooter to the Promised Land with a glorious and memorable bang. Simply put, tubular magazines couldn’t be loaded with the new cutting-edge pointed projectiles, but the Winchester ’95 could. It was a historic step.

Unfortunately, it was a step too late. Bolt-action rifles took the shooting world by storm less than a half decade later, leaving the 1895 in their dust almost before its story got started. Still, the lever-action possessed certain attributes unknown to bolt action rifles and forged a couple decades of notable history, including action in several conflicts. It was also favored by notable figures of the day as a hunting rifle, among them Theodore Roosevelt and Zane Grey.

Roosevelt’s notable adventures with his ’95 chambered in .405 Winchester is well documented in African Game Trails and served as the inspiration for my own adventures in Namibia with a model 1895. Zane Grey’s adventures are less known. Grey was a star athlete (baseball), fisherman with at least one world record, and author of over 100 Western novel titles. He loved to hunt the Mogollon Rim country of Arizona, carrying his ‘95 in pursuit of bear, deer, and turkey. In 1924 Winchester presented him with one of the most ornate model 1895s ever made in recognition of his many accomplishments. That rifle now resides in the Cody Firearms Museum in Cody Wyoming and is worth the trip just to see.

A total of just over 425,000 M1895 rifles were produced, including civilian and military-contract weapons. Ironically, between 1915 and 1917 around 300,000 were made on a Russian military contract. These rifles were chambered in 7.62 x 54, and featured extra long barrels with extended forestocks.

Model 1895’s were popular among the famous Arizona and Texas Rangers, likely because they carry very comfortably in a saddle scabbard. An old friend from my youth grew up cowboying in Arizona, and once found an ancient 1895 in 30-40 Krag leaning against a Saguaro cactus, rendering a fascinating unanswered mystery to all who see the rifle and hear the story.

Both Browning Arms Company and Winchester have re-introduced the M1895 in recent decades. Miroku of Japan built the rifles for both. The Winchester models feature a rebounding hammer and tang safety. They’re out of production and not readily available, but can be found with a bit of searching. 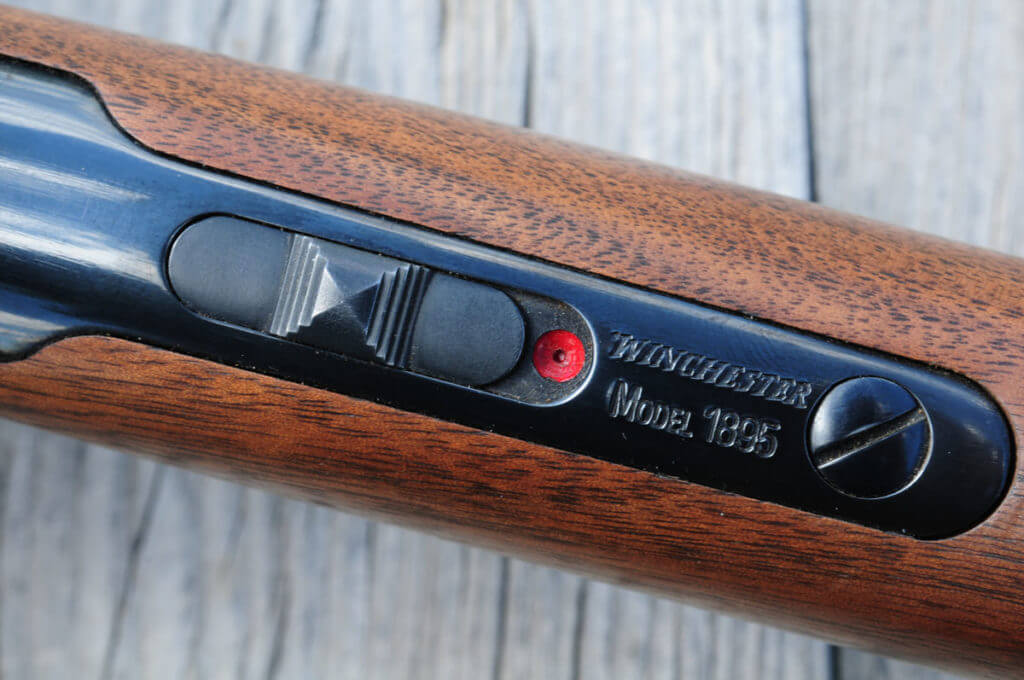 My M1895 is a contemporary Winchester model chambered in 30-06. It balances like a Latin dancer, cycles as smooth as pure maple syrup, and devours almost any ammunition with surprising accuracy. Walnut stock and Schnabel forend frame the gleaming blued steel action, barrel, and hardware with surprising grace. The absence of a tubular under-barrel magazine, the presence of the under-action box magazine, and the shotgun buttplate render an entirely different appearance from the classic western lever-gun, surprisingly pleasant in its own fashion. Fit and finish are very good. 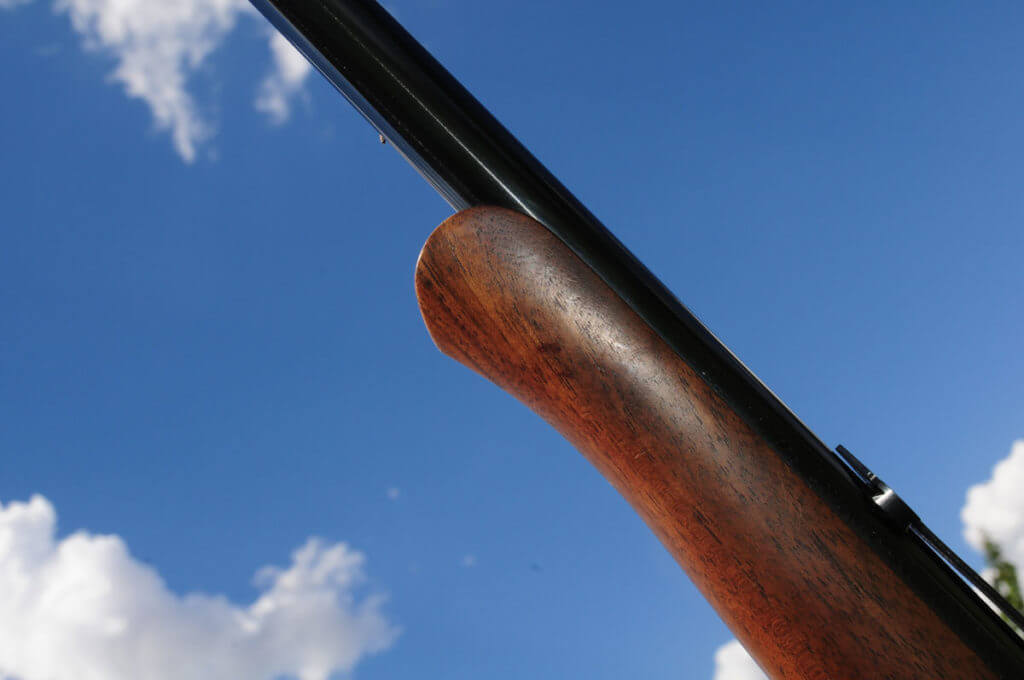 The Schnabel forend adds an unusual but graceful touch.

The trigger on my ’95 breaks at a somewhat irregular six pounds. While not a terrible trigger, creep and grind are very present. The 1895 actions are notoriously hard to reassemble for a neophyte gunsmith, so I asked one of the engineers at Winchester if my trigger could be cleaned up. He responded in favor, in fact, said that it could be made very good, but not to tackle the job without his help. I haven’t. 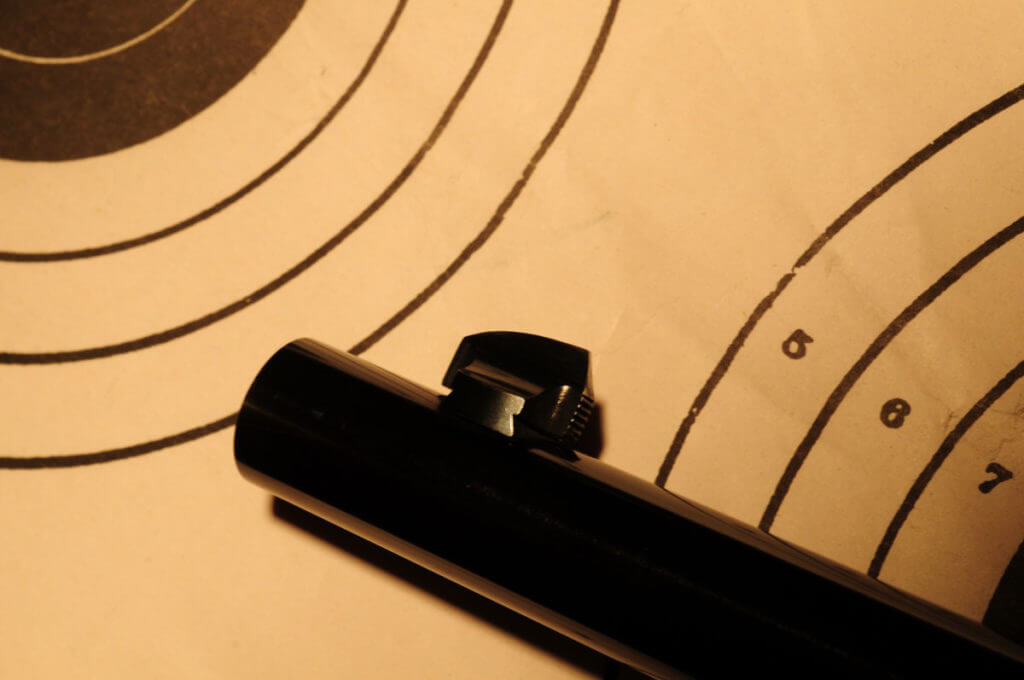 The ‘95’s front blade sight is simple and sturdy. 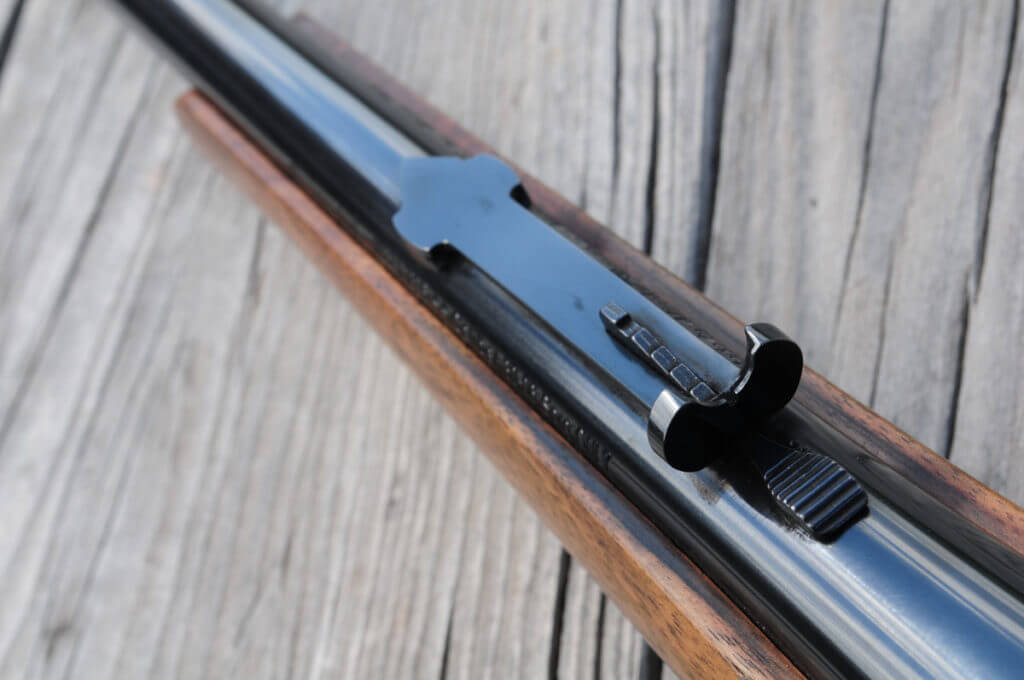 A front blade and semi-buckhorn rear sight sit in well-fashioned dovetails atop the barrel, both drift-adjustable for windage. The rear sight is adjustable for elevation via a sturdy six-notch ramp. The ‘95 action is top-eject, meaning empty cartridges leap skyward when the action is cycled, leaving no place for a scope to live. There are no scope mounts or holes. If you want a more sophisticated sighting system your best option will be a receiver-mounted peep sight like the historically accurate Model 21. Contemporary models are made by Providence Tool Co. LLC, and are available at www.peabodyrifle.com/sights. 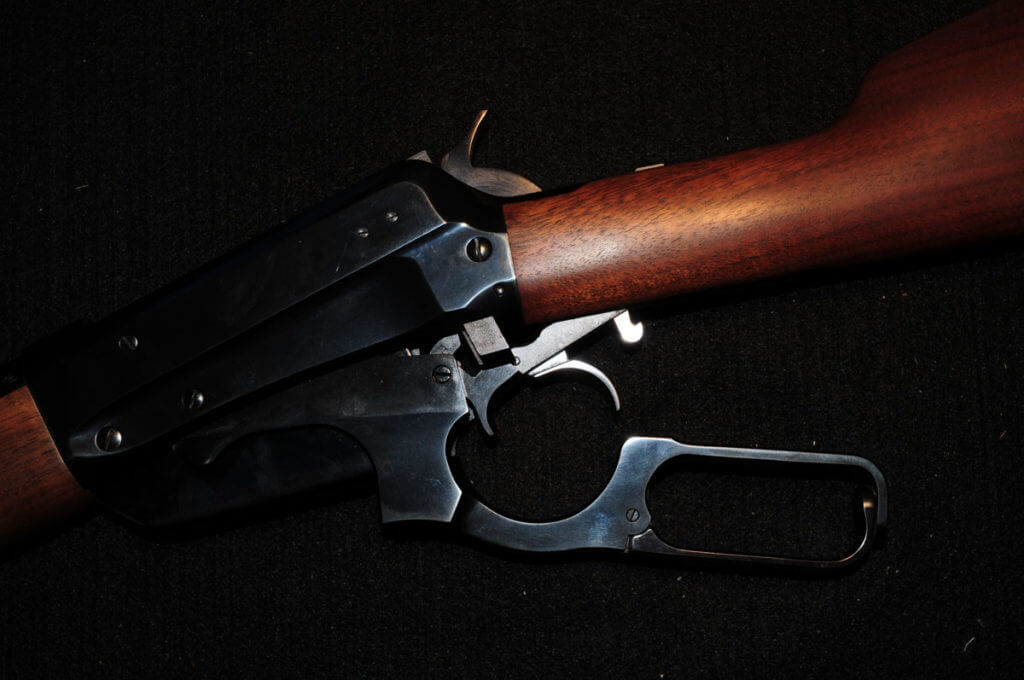 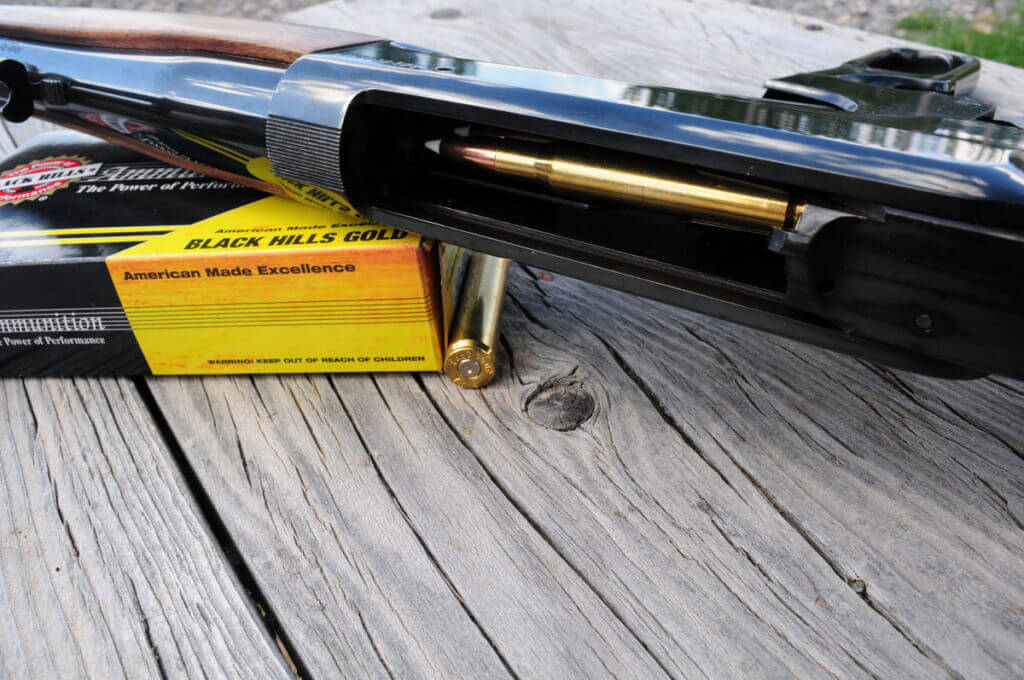 My rifle features a tapered round barrel that is precisely 24-inches long. The shotgun buttplate is smooth blued steel fastened by two screws. Length of pull is 13 ¼ inches. Magazine capacity is four, loaded one by one into the straight-stack magazine through the top of the opened action. A fifth can be slid into the pipe before closing the action. The rifle will not fire unless the lever is fully closed, engaging a safety latch at the rear of the trigger bow. The lever loop is a hinged two-piece design, with the hinged piece acting as the lever-latch. A tang safety is fitted nicely atop the wrist. As mentioned above, my rifle is extraordinarily accurate with a wide variety of ammunition. I have shot many sub-moa 100-yard groups with it, though due to weather conditions that were not reflected in the accuracy test below. 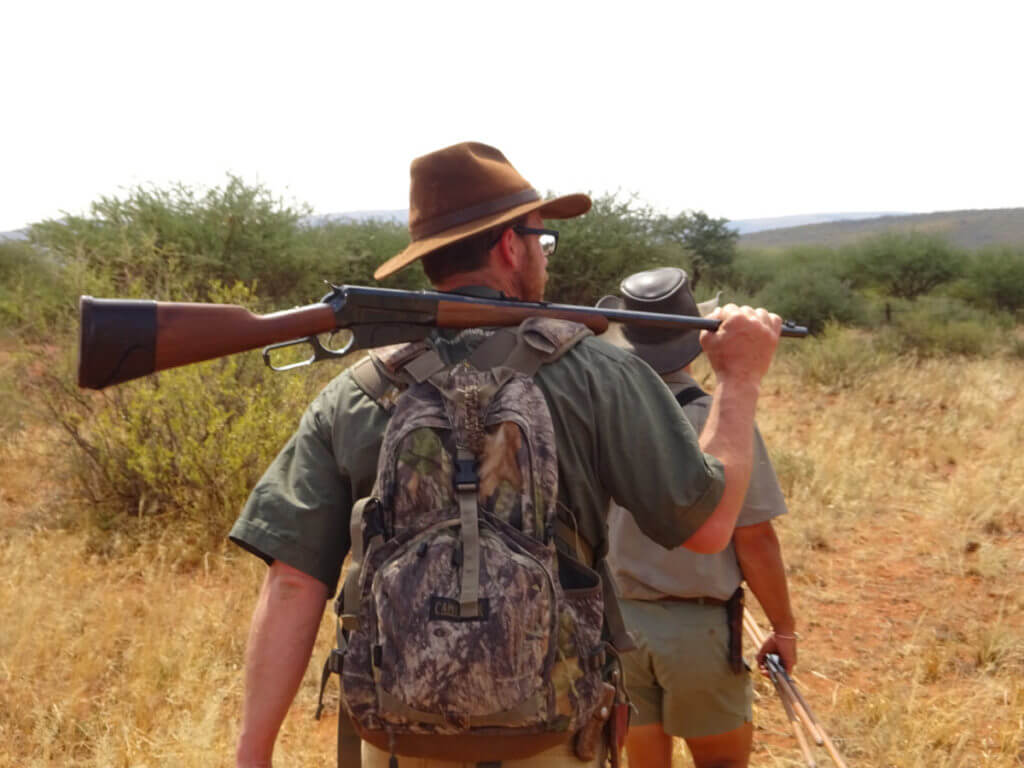 Winchester M1895 rifles are graceful, capable, accurate, and historic. For an iron-sighted lever-action rifle chambered in cartridges meant to use pointed bullets, it is without par. My rifle feels great in the hands and carries like an extension of oneself. It is fast, well balanced, and attractive.

Thunder grumbled again in the distance. I stood legs apart, rifle across tall cross-sticks. Kudu moved across a narrow opening in the brush just over a hundred yards distant, the bull trailing his cows. Dim light made it hard to resolve iron sights against the steel-grey of the bulls hide. Stride-by-long-stride the bull crossed the opening, nearly gone into the thick. Almost 110 years after Teddy Roosevelt’s 1895 shattered the silence across Africa, mine spoke its own piece. The old kudu bull lay still in the long golden grass of Africa, cleanly taken with one shot from a historic rifle. It was a good feeling.

Note: Accuracy testing was performed at 100 yards from a double sandbag rest. Conditions were brutal with a variable 3–10 mph crosswind and near 100-degree temps. Even after each ten-minute cool-down period, the barrel was uncomfortably hot to the touch. Velocity was measured with a Shooting Chrony set 10 feet in front of the muzzle. Accuracy was the average of three, 3-shot groups shot using only the barrel-mounted iron sights. The best group measured .720-inch. Undoubtedly the averages would have been significantly better had conditions been suitable to accurate shooting.

{ 16 comments… add one }
MENUMENU
Send this to a friend