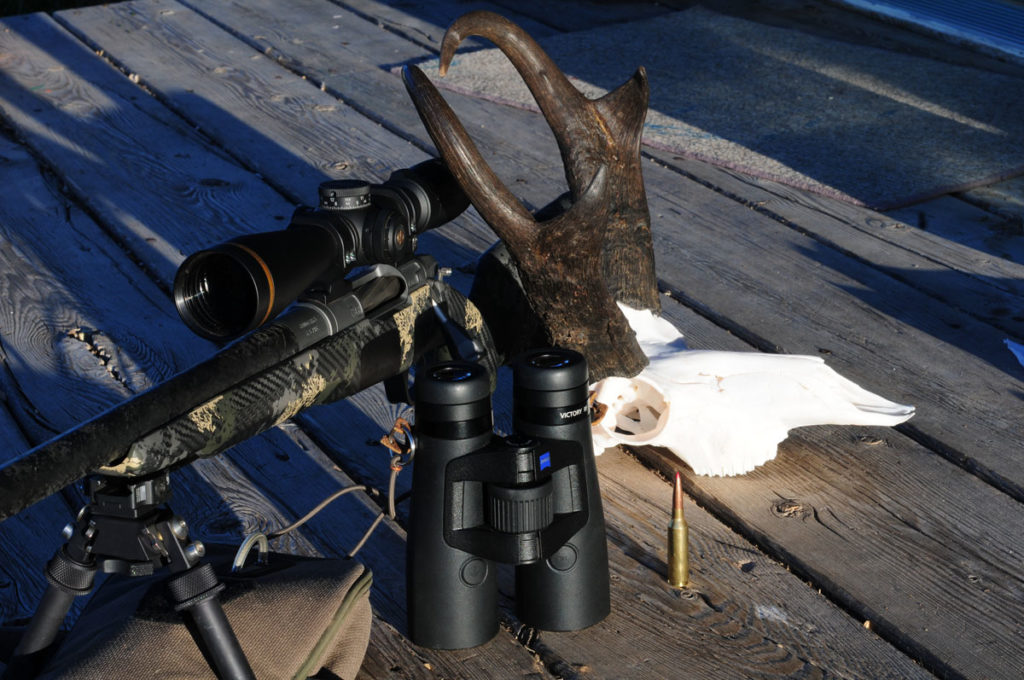 The basic premise of the Victory RF is that once programmed, it’s capable of performing all necessary tasks as a stand-alone unit. All the shooter needs is his rifle and his binocular.

Prairie grass lay short and dusty under my belly, a few 12-inch tufts of yellow-flowered snakeweed my only cover. My only cover, that is, but for a large, slightly wind-battered cow decoy. A distant pronghorn buck stared at my cow and me, horns flaring nicely in the harsh mid-afternoon light. I’d been rendering my best cow-feeding-across-the-prairie performance over three hours and a mile of flat dusty ground, trying to close within good range of the buck. The moment had finally arrived, and I studied him through my new Zeiss Victory RF binocular. No real trophy, he was nonetheless a good buck for the area. I pressed the range button, waited a half-second for my ballistic solution to display, and cranked the elevation dial on my scope to the recommended plus-6.5 minutes. The range was exactly 486 yards. One perfect shot later the pronghorn lay still on the prairie. 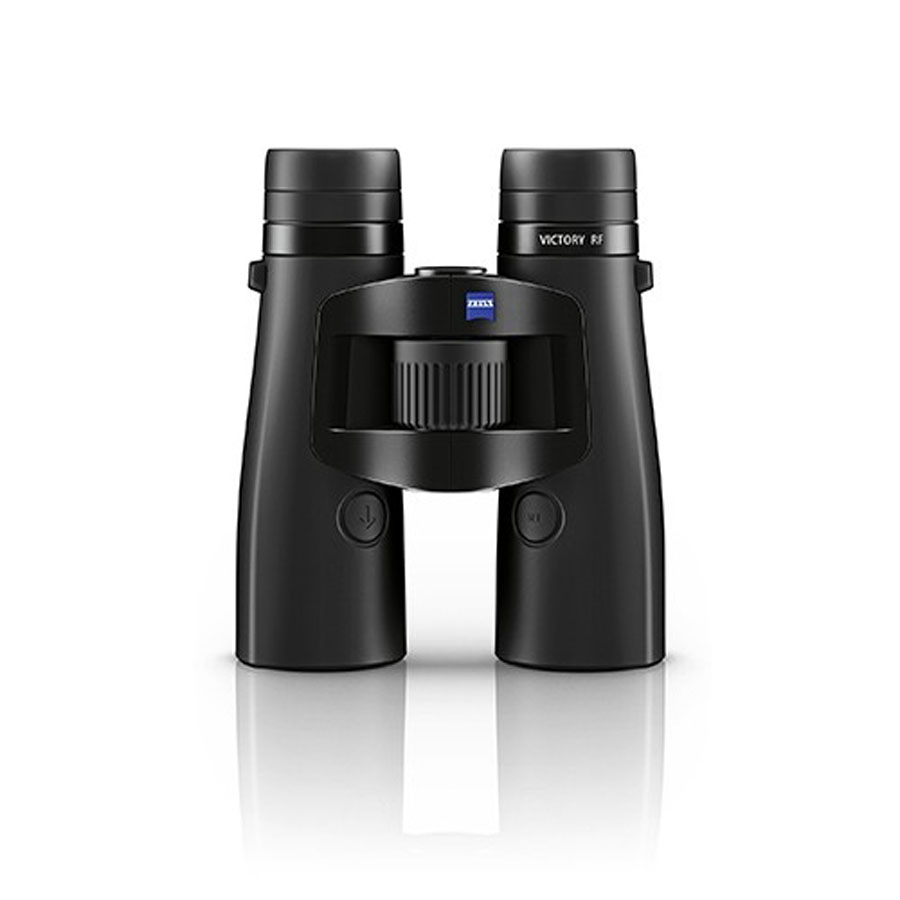 Ergonomic and well-balanced, the new Zeiss Victory RF is a superbly capable unit.

In an unprecedented (for me) flash of brilliance, I’ll make the astute observation that shooting has changed significantly during the last two decades. What used to be long no longer is. What used to be a Hail Mary is now a simple shot. Now, with the right tools any shooter capable of understanding ballistics, assuming a steady position, and executing a smooth trigger press can ring steel at unholy distances. And not only that —they can do it every time.

So what are the “right” tools for precise long-range shooting? There are five:

The first two (rifle and scope) are married into one unit. Not so with the other three. Most experienced long-range shooters possess a good laser rangefinder, a Kestrel atmospheric meter, and use their smartphone to run ballistic calculations. If you’re like me that means something is always out of reach, buried in my pack, or dropped on the ground. It would be so nice if all three could be wrapped in one tidy package.

Well, now they are. Even better, that package is a top-echelon binocular, creating an incredibly capable tool for every long-range shooter or hunter. To be honest, it’s not the first time such a feat has been accomplished; Leica has packaged ballistic software in their range-finding binoculars, Gunwerks has rangefinders capable of calculating how high to throw a rock if you want to hit the moon, and the new Revic Smart Rifle scope checks weather and performs Olympic-level acrobatics with ballistic algorithms.

But the new Zeiss RF binocular does almost everything.

It reads the temperature. It measures the altitude. It senses the pressure. It computes the angle. And of course, it lasers the range. Then, in a fraction of a second, it adds it all together, calculates all the variables relative to your rifle and ballistic data, and spits out a solution. All you need to do is read the solution, dial your turret to the appropriate correction, and execute the shot. The only remaining variable is the wind – which is a subject for another time.

Perfection is hard to find, but in an unabashed plug, I’ll state that Zeiss’s new Victory RF binoculars are pretty close. I first encountered the new ballistically-endowed version of their well-respected bino-rangefinder unit at the 2018 SHOT show. I requested one for testing and evaluation on the spot. 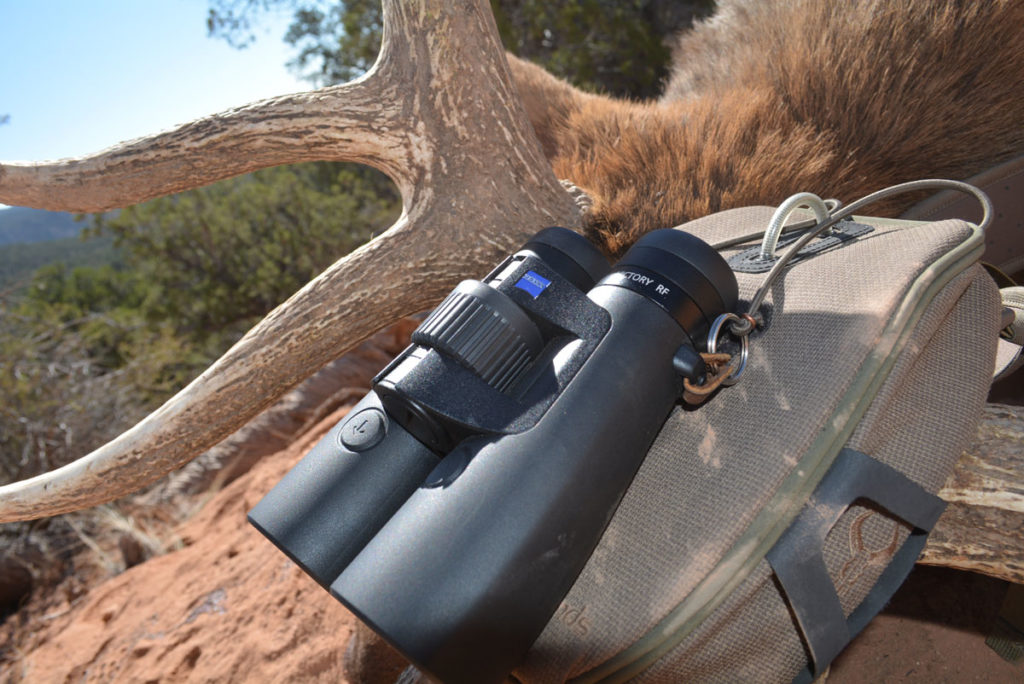 Optical clarity in the RF is beyond reproach. The author was able to identify this bull from over 800 yards away.

Lest I come across as a Zeiss salesman, allow me to state that the Victory RF does have its challenges. The main one in my case stemmed from my technologically handicapped nature. That is to say, I did not find the programming system intuitive. My educated guess is that German engineers far more brilliant than I designed the system. Still, once I gained a rudimentary understanding of how it all worked, I found the system to be brilliantly capable, even if not intuitive.

To set up the Zeiss RF binocular you’ll need a smartphone or tablet. Start by downloading the free Zeiss Hunting App from the App Store or Google Play. Follow your instruction booklet or the online video instructions to pair the RF with your device. Then enter your load data and customize your ballistic profiles, and then sync your device with the RF unit.

Once the unit is programmed, it functions as a stand-alone unit; you can leave your device home or in the truck if you wish. With the onboard buttons you can adjust the display brightness, select yards or meters, choose between nine pre-programmed ballistic profiles or nine customizable profiles, and more. 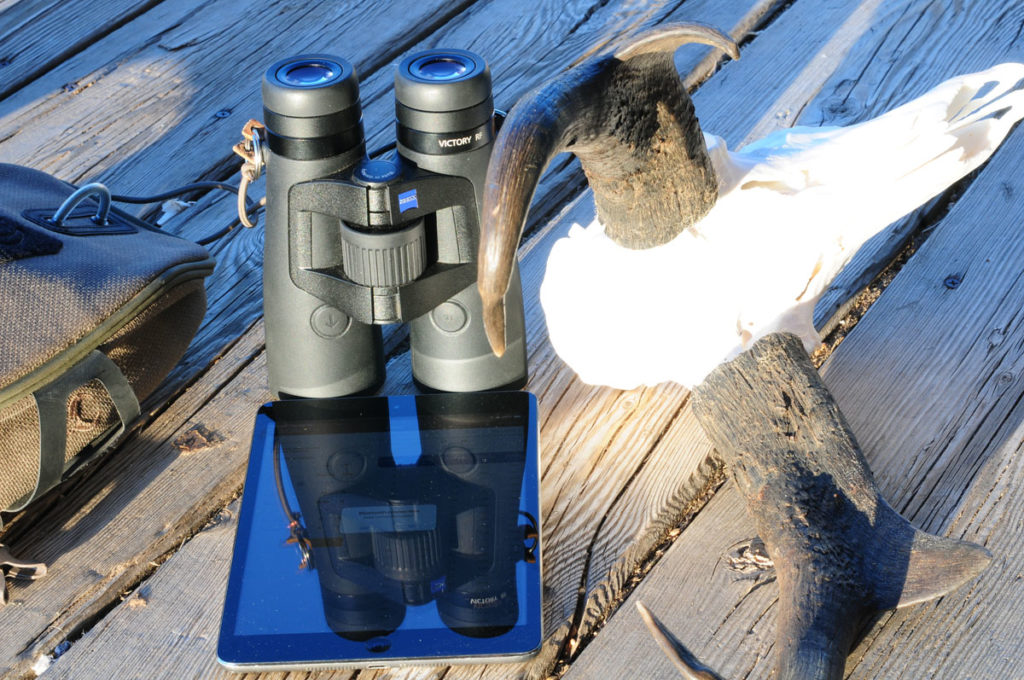 The Zeiss Victory RF is available in 8X42, 10X42, 8X54, and 10X54 configurations. The unit is ergonomic and comfortable in the hand. There are two onboard buttons, one for accessing the menu and changing settings, the other for ranging. The function of these buttons can be switched from side to side to accommodate right or left-hand shooters. The location of these buttons felt awkward at first but soon became comfortable. One feature I really enjoyed about the ranging button is that unlike most rangefinders wherein one must push the button once to activate it and a second time to range, the shooter need only push the button once. The range is displayed upon release. Range capability is rated from 16 to 2,500 yards. 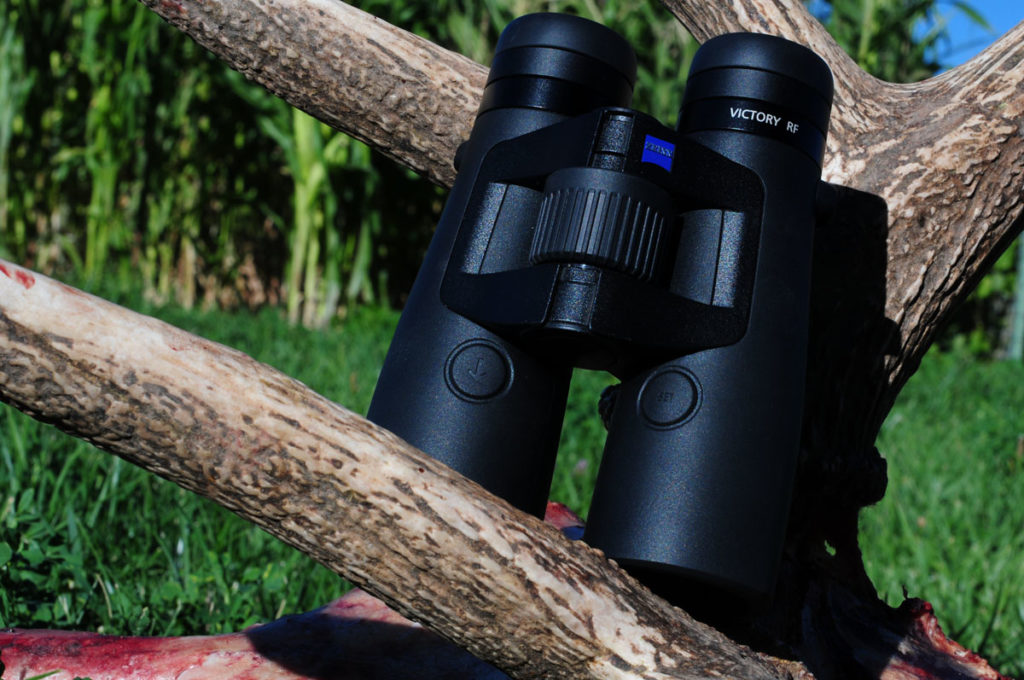 The buttons on the RF take a little getting used to, but are large and R/L hand switchable.

My in-the-field testing consisted of extensive long-range shooting with two different rifles, one chambered in 6.5 Creedmoor and the other in 6.5 PRC. I ran calculations for each target on my Hornady 4DOF calculator, factoring in elevation and temperature. Then I ranged the same target with the Victory RF (set to the appropriate ballistic profile) and compared the result. I was pleased to find the solutions to be consistently within a quarter-minute of each other, at ranges from 200 yards (zero) to 940 yards (the furthest target I tested).

Further testing included the pronghorn hunt detailed above, and a friend’s limited draw elk hunt in Southern Utah. Both ended with one perfectly placed shot. While hunting I was impressed with the optical clarity and light-gathering capability of the 10X42 Victory RF binocular, finding that I could easily assess and field judge elk at distances over 500 yards. The rangefinder performed well out to exceptionally long distances during overcast or low light conditions. During the harsh light and unforgiving conditions of western midday, performance was reduced to around 800-1,200 yards, as expected. 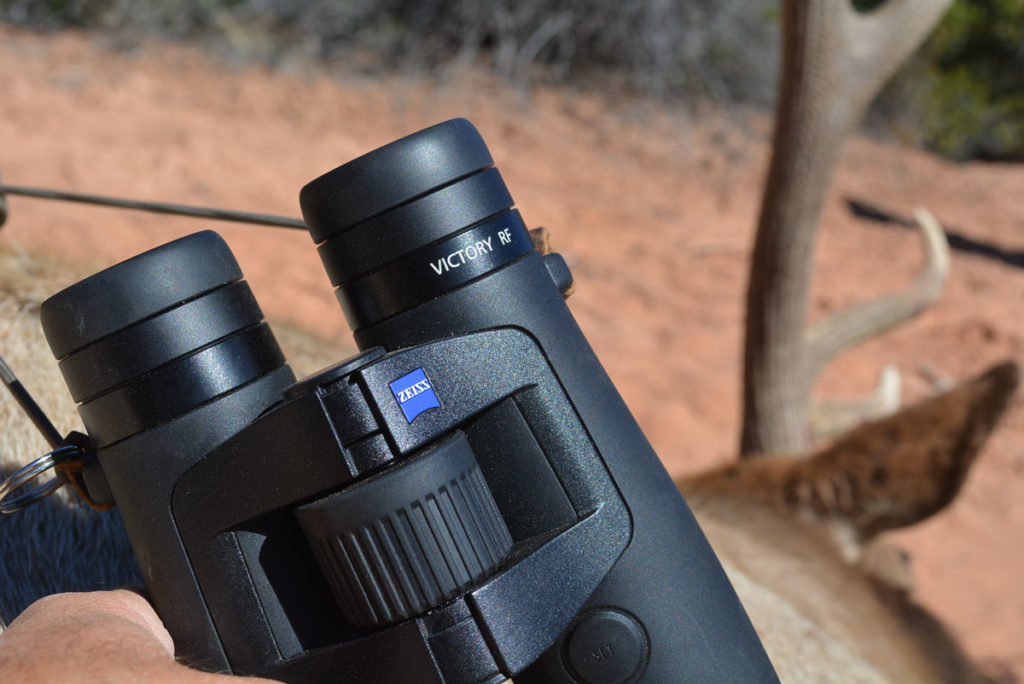 Fit, finish, and quality on the Zeiss Victory RF are excellent.

I did experience one odd anomaly early in my testing. For some reason, shortly after I opened the package, installed the battery, and set up the unit I began getting erroneous range readings. Usually, it occurred after ranging very long distance (past 2,000 yards) and then ranging up close (under 200 yards). I would continue to get range readings of over 2,000 yards, even on the close targets. I considered the problem, came to the conclusion that the unit contained a rather sophisticated onboard computer, and decided to try to reset it, much like restarting a computer. I removed the battery, waited 60 seconds, and reinstalled it. That solved the problem, and the issue never returned.

In conclusion, the Zeiss Victory RF is a very capable tool housed in a premium binocular. Optical clarity is exceptional, performance is stellar, and quality is beyond reproach.