In Colorado Big Game Hunting and Fishing is Big Business 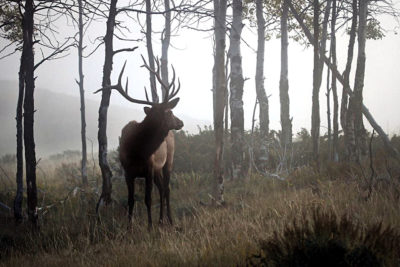 A survey commissioned by Colorado Parks and Wildlife shows what many locals have banked on for years, that hunting and fishing – big game hunting in particular – is big business. Sportsmen and women spend $1.8 billion a year to enjoy what the Rocky Mountains have to offer.

This year Colorado issued 127,600 tags for elk alone, which is about 5,000 less than last year as wildlife officials manage the state’s herds. This does not cover “over-the-counter” licenses, which are a type of license offered after big game tags are drawn for the first season.

The role of hunting in Colorado has been a good one. The state has some of the largest and healthiest herds in the country. Hunters may use bows, muzzleloaders or rifles to hunt most big game depending on the season.

“Elk herds have been a big success story in Colorado. As we’ve sometimes struggled with deer herds, elk have been a vibrant and growing resource,” Petch said.

“Hunters and anglers play a major role in sustaining Colorado’s natural resources through their willingness to pay for conservation through the purchase of hunting and fishing licenses,” said Colorado Parks and Wildlife director Bob Broscheid.

“We cannot predict the future but are planning for it,” said Broscheid. “Colorado faces a growing number of challenges as we see unprecedented population growth, urban sprawl, habitat loss, continued debates over water use and a growing segment of citizens who are not connected to nature and its care.”

Still, the number of hunters in Colorado is growing. According to the survey, that $1.8 billion revenue is up steeply compared to $845 million in 2004. It’s estimated that hunting and fishing props up as many as 21,000 jobs in the state.

Sportsmen and women are also willing to pay more than other vacationers to stay close to Colorado’s wilds. Compared to skiers and the like, which spend about $118 per day hitting the slopes, hunters pay on average $253 per day to hunt.

About two-thirds of hunters in Colorado are residents, although out-of-state hunters generate around half of the total revenue associated with hunting and fishing. These hunters spend more on hotels, restaurants and activities than other tourists do.

The study was conducted by Southwick and Associates on behalf of Colorado Parks and Wildlife.