Jamie Foxx, The Killers Speak on ‘Gun Violence’ and It’s about What You’d Expect 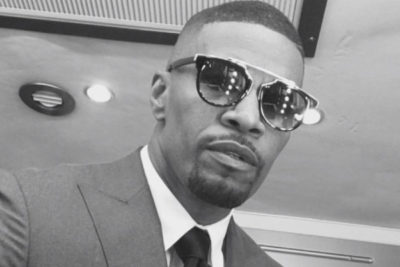 Jamie Foxx tried to sound a bipartisan tone but shied away from specifics. (Photo: Facebook/Jamie Foxx)

The Killers released a stand-alone track ironically titled (ironic to us, not to them) “Land of the Free,” which tackles a variety of controversial issues, including border security, mass incarceration, and “gun violence.”

With gospel-inspired singers in the background, Flowers croons, “So how many daughters, tell me how many sons/Do we have to have to put in the ground before we just break down and face it/We got a problem with guns/In the land of the free.”

Flowers claims he started working on this song all the way back in 2012 after the Sandy Hook massacre.

“I cried for those kids and teachers,” he wrote on social media. “I got on my knees and I prayed for those families.”

Apparently, he wrote the verses attacking President Trump’s border wall much more quickly than the one addressing firearms.

Foxx spoke to reporters Sunday at the California Strong Celebrity Softball game, a charity event meant to raise money for the victims of the state’s recent wildfires as well as the massacre at the Borderline Bar & Grill.

The actor called for “cooler heads” in national politics and hoped leaders can “just erase the lines in the sand when it comes to politics.”

“This is the one time I can say in our history that nobody on either side of the political whatever, has taken a step towards saying, ‘Hey, we’re smart enough — how do we prevent these things from happening?’” he said.

Foxx didn’t offer any particular adjustments he hopes will be made.