Kimber’s new EVO SP series of pistols is not just a do-over of the SOLO.  This pistol works!

“Success has many fathers, but failure is an orphan!”  The quote has been attributed to several people, including President John F. Kennedy.  I think the phrase is applicable to Kimber’s new EVO SP pistol.  The EVO SP, in general, is a successor to the ill-fated Solo.  First introduced in 2011, the Solo was a sub-compact, striker fired, 9mm pistol designed for concealed carry and personal defense.  The Solo was a great size and came along several years before the Glock 43.  At just under 4” in height, 5.5” in length, and 1.5” in width, the Solo featured an alloy frame with a stainless barrel and slide.  The little gun created a lot of excitement and gave Kimber a presence in the small concealed carry market.

It wasn’t long before the new pistol starting having reliability issues. Kimber attempted to correct the issues and went so far as to recommend only specific ammunition loads in the owner’s manual.  These included only 124 grain and 147 grain loads with examples being Federal Hydra-Shok, Remington Golden Saber, and Hornady TAP loads.  Part of the problem could have been the short 2.7” barrel and reduced operating space in such a short slide.  However, “you never get a second chance to make a first impression.”  The reputation of the Solo never recovered and Kimber discontinued the little pistol in 2017.  At the same time, their Micro mini 1911 series was selling well and many thought Kimber had given up a striker fired pistol.

In late 2018, Kimber announced the new EVO SP series that looked like a do-over of the Solo.  I must admit I was somewhat skeptical as well.  So, when Editor True Pearce asked me to test and write a review, I jumped at the assignment.  I knew that the GunsAmerica readers would want to know if the EVO SP is better than the Solo.  For the record, I never owned or shot a Solo, so I was not going into this assignment with any prejudices.

The EVO SP comes in four different versions, the TLE (Tactical Law Enforcement), the CDP (Custom Defense Package), the Two Tone model, and the CS (Custom Shop) model.  The statistics on the base pistol are as follows:

After looking at the various models on Kimber’s website, I requested either the Custom Shop model or the TLE. I was fortunate to receive the CS model. The CS model features subtle lightening reliefs on both the slide and frame. The front and rear cocking serrations are Kimber’s Stiplet design that are both attractive and functional. As with all of the EVO models, the front strap is relieved at the base of the trigger guard for a high grip purchase. The front strap on the CS model also has Stiplet dimples for a non-slip texture. The stocks are made from G-10 and feature a larger Stiplet design. The backstrap features a stippled G-10 insert that is also stippled. 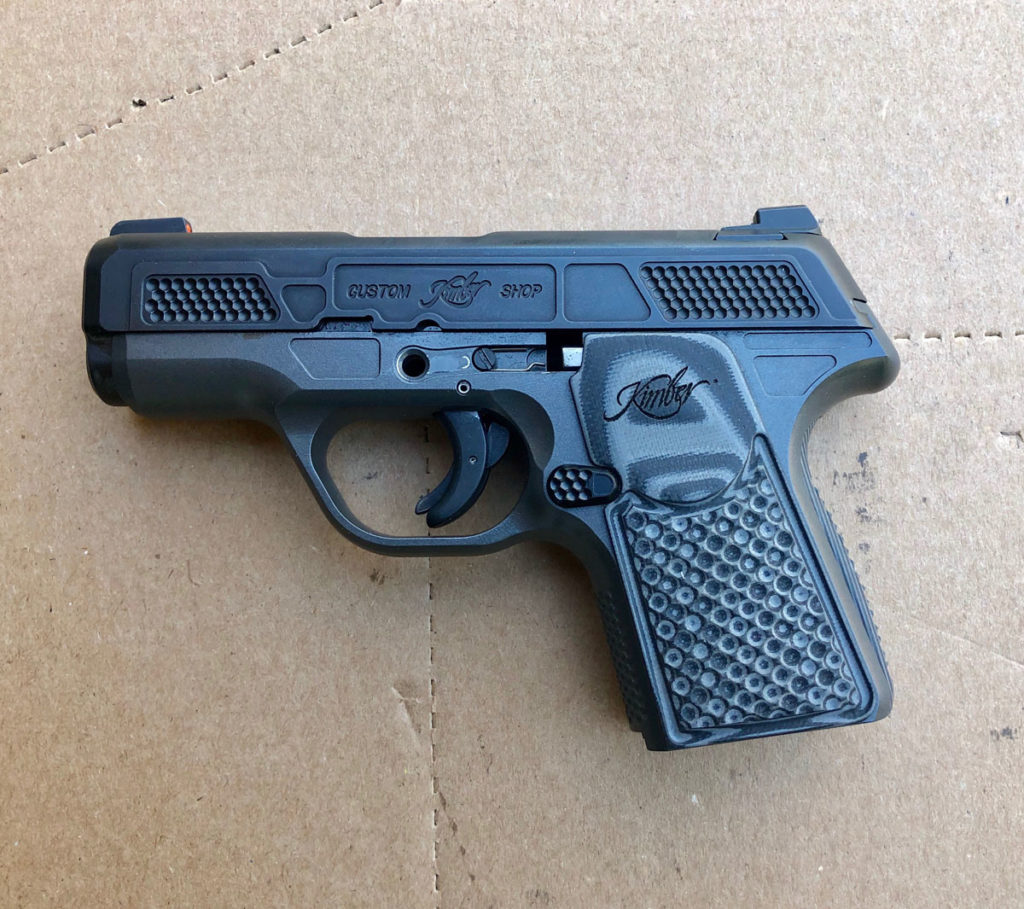 The EVO SP features Kimber’s Stiplet design on the slide as well as the frame.  The texture provides a positive gripping service while not being overly aggressive. The Slide stop has been removed in this picture for breaking the gun down. 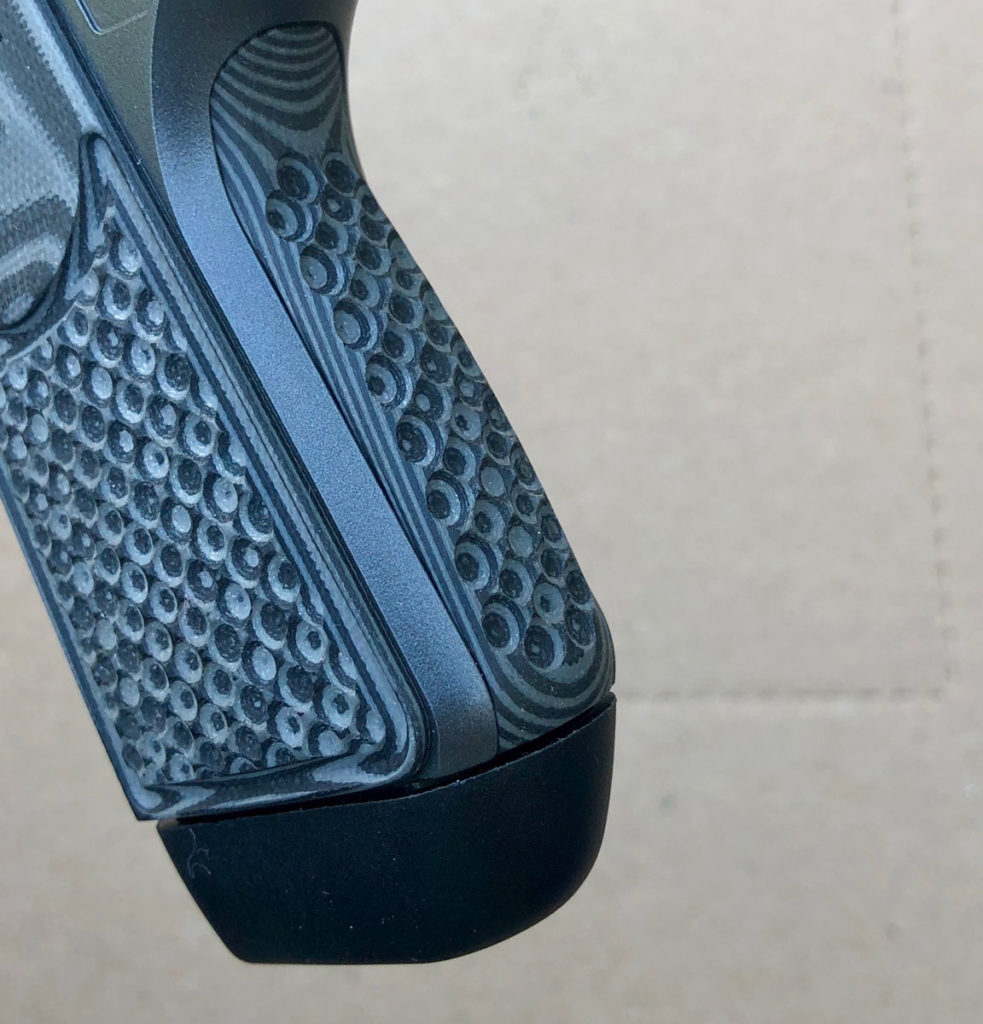 The backstrap on the EVO SP CS is machined from G-10 and has a larger Stiplet pattern than the slide and frame. 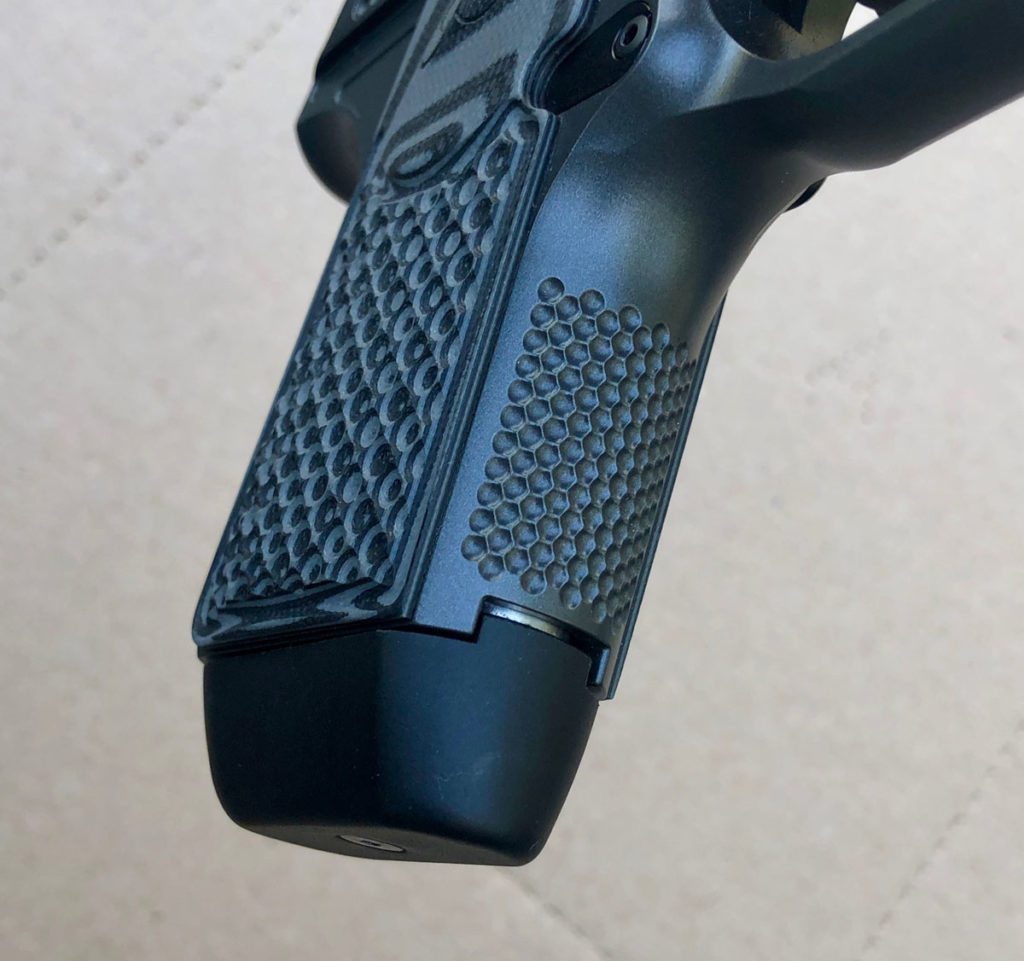 The front strap is undercut for a high purchase and the Stiplet pattern ensures a positive purchase on the pistol.

The sights on the CS have been upgraded to TRUGLO’s TritiumPro three dots with a large orange front sight and a ledge style rear sight.  The magazines on all EVO SPs have an extended spacer with a seven round capacity.  The spacer is contoured to follow the lines of the sides, front, and rear of the frame.  The operating controls on the EVO SP consist of a low profile, but functional, magazine catch that is reversible and a 1911 style slide stop.  The 3.1” barrel on the Custom Shop model, has been flush cut and features a deep crown.  The end of the slide is also beveled to ease reholstering.  Overall, the EVO SP CS, with its distinctive features and its black over gray color Kimber Pro finish, is a very attractive pistol. 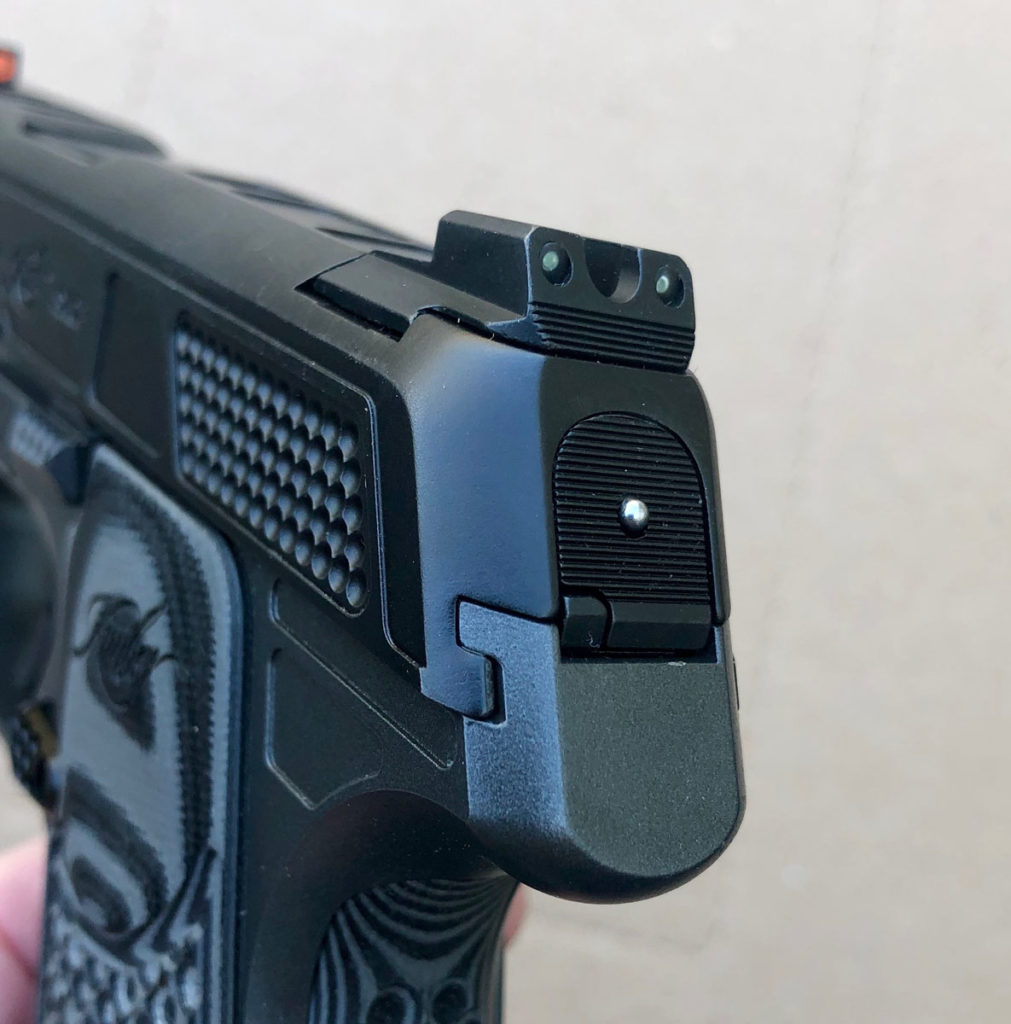 The sights on the EVO SP are from TRUGLO.  The rear sight is a ledge design with Tritium inserts.

The front sight features an orange/Tritium insert for visibility in all lighting conditions. 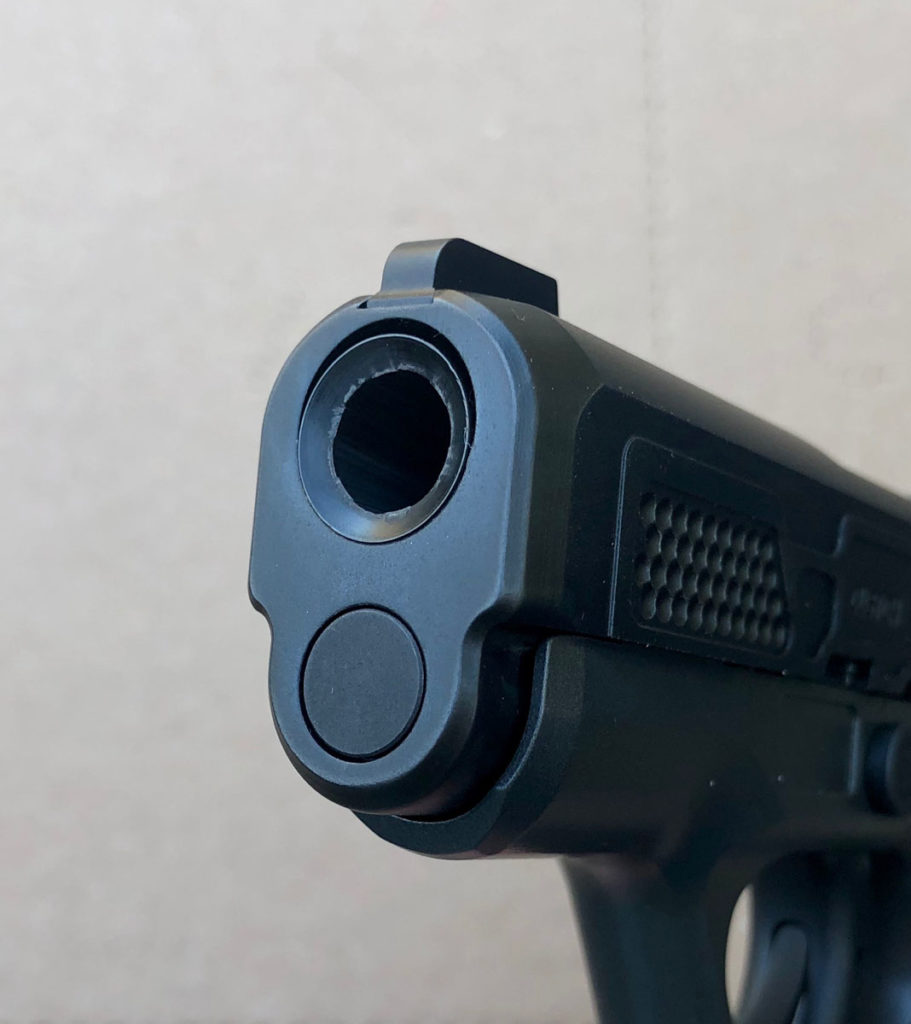 The Custom Shop EVO SP features a flush cut barrel that has been recessed with a deep crown.

Prior to hitting the range, I put the EVO SP CS model on my electronic trigger pull gauge.  The trigger on the CS averaged 6 lbs. 10 oz. with minimum overtravel. The trigger has an inner safety lever that is similar to most striker fired pistols.  My first impression was that the trigger was a little “mushy.”  I did like the fact that the trigger was void of serrations and the edges were nicely rounded. In fact, except for the edges on the sights. The EVO SP is void of any offending sharp edges. 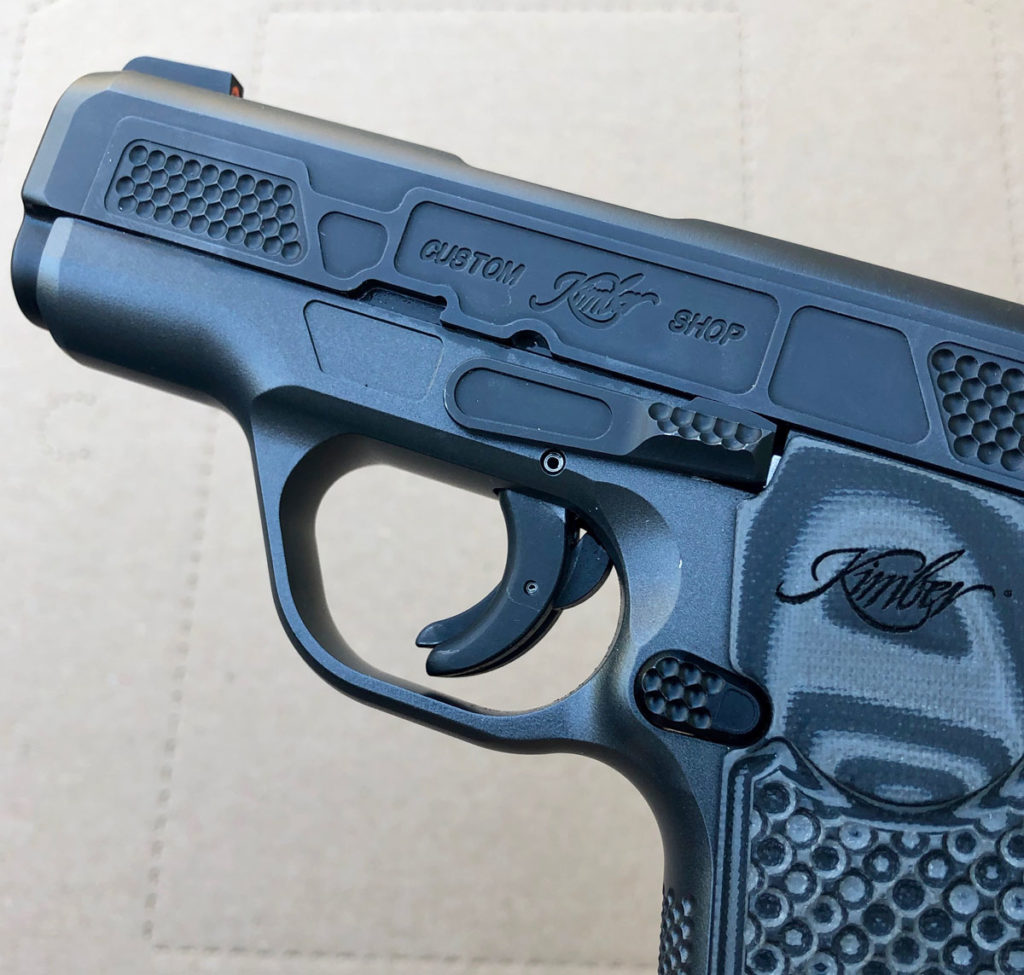 The trigger on the EVO SP CS has been rounded and lacks any offending serrations. The slide stop is a 1911 design that worked well during reloads. Note the attractive lightening cuts in the slide and frame.

I was determined to really ring out the EVO SP CS to see if I could discover any issues left over from the Solo.  To that end, I tested loaded up with four premium personal defense loads, a couple of hundred rounds of ball ammo, and headed to the range.   To get a feel for the pistol, I started out with Super Vel’s 115 gr. FMJ training load.  The EVO gobbled up 50 rounds as fast as we could load the magazines.  Recoil was manageable and we found the textured grip substantially better than some of the small polymer frame pistols.  The TRUGLO sights gave a crisp sight picture and we were able to engage a reduced vitals steel target at 45 yards with boring consistency. 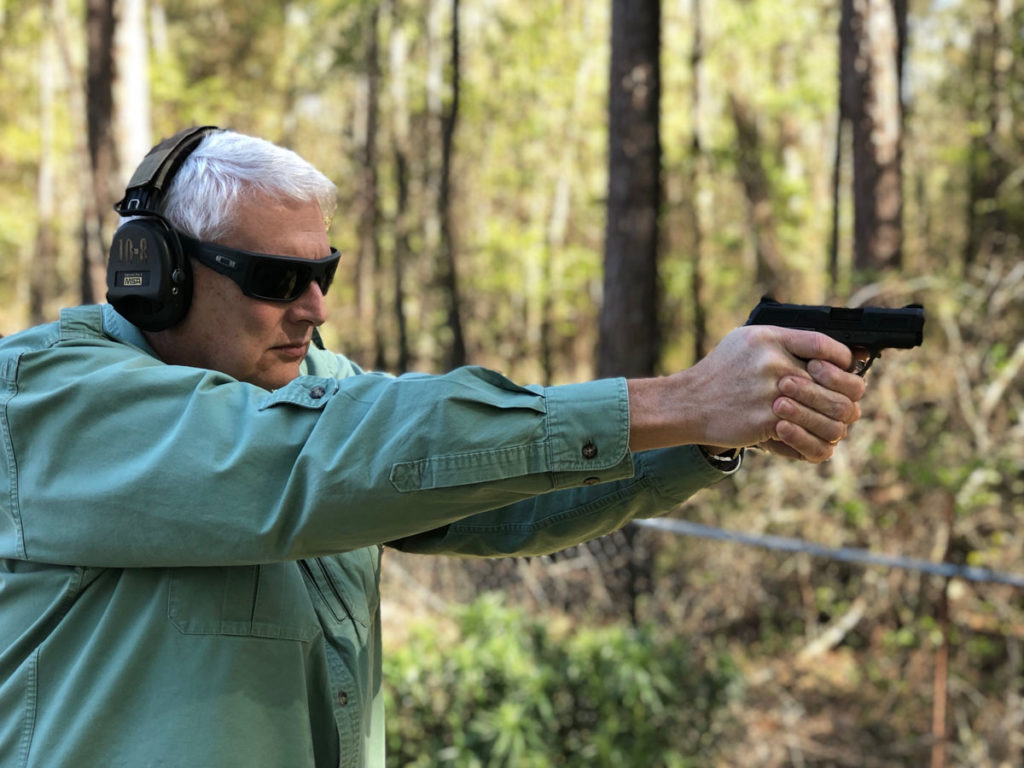 The author found the Kimber EVO SP to be reliable, accurate, and pleasing to the eye. 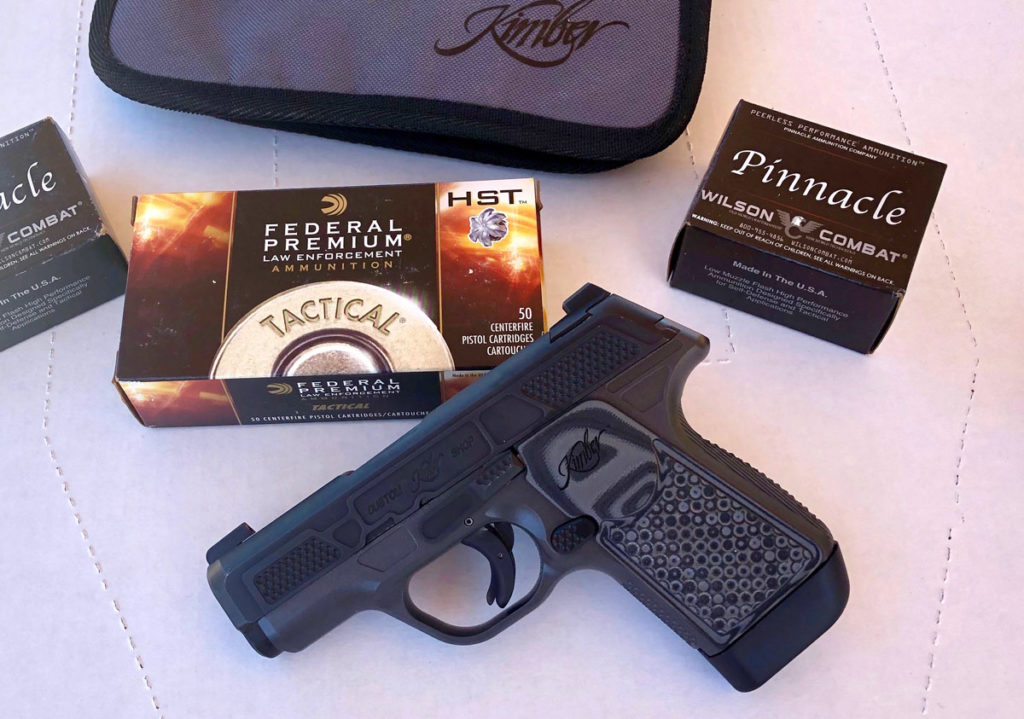 The EVO SP digested over 300 rounds of varied ammunition with no malfunctions or issues.

However, the EVO SP is designed for personal defense and I knew the real test would be with loads designed for that purpose.  Given the bullet weight issues with the Solo, I wanted to identify any potential issues with the EVO SP.  Enter Wilson Combat.  Wilson’s Pinnacle line of ammo is specifically designed for personal defense. I started out with the Pinnacle 95 grain TAC-XP load.  This load features the Barnes solid copper TAC-XP bullet and is optimized for compact pistols.  The 95-grain TAC-XP averaged 1,121 fps and was relatively mild to shoot.  The next load was Wilson’s 115 grain TAC-XP load that also features the Barnes bullet.  The 115 grain is rated as a +P load and averaged 978 fps.  I then moved on to the Wilson 124 grain XTP-HP +P load. This load, that features Hornady’s XTP bullet, averaged 1,101 fps. Finally, I tested Federal’s excellent 124 grain HST load in a non-+P loading.  The HST averaged 1,064 fps.  The EVO SP CS was 100% reliable with all of these loads.

This is the best five shot group of the day, shot with Wilson Combat’s 90-grain TAC-XP Barnes bullet.

Accuracy testing is always more about the shooter’s ability than that of the pistol.  I shot the EVO SP CS off of a pistol rest at 10 yards.  To mitigate shooter error, I fired a 10 shot group with each load and then measured the best five shot.  As the accompanying chart reflects, the little Kimber is easily capable of producing some very good groups with any of the loads.

After getting the tedious portion of the testing out of the way, it was time to really run the EVO SP CS to see how it performed at speed.  My favorite drill for full-size pistols is Ken Hackathorn’s 10-10-10.  The drill is shot on an NRA 25-yard bullseye target from ten yards.  Starting from a ready position, the shooter has a par time of 10 seconds to fire 10 shots.  For sub-compact pistols, I move to five yards and fire two stages of five rounds each, with a par time of five seconds for each stage.  This is where the EVO SP really shined.  I shot a 99/100, dropping one round into the nine ring. My times were 4.52 seconds and 4.29, well within the par times.  I was impressed!

By the end of the day, I had run close to 300 rounds through the EVO SP CS with zero malfunctions.  From a shooter’s perspective, the little gun just works.  The trigger got better, the more I shot it, and the sights were easy to pick up.  The pistol really liked the 124 gr. load and shot them closer to the point of aim than the 95 grain or the 115-grain loads.  One feature that I really appreciated was the design and location of the slide stop.  On many pistols, like a Glock 19, Glock 26, or my SIG 365, I find that my thumb rides on the slide stop, preventing the slide from locking open on the last round.  I did not experience this problem with the EVO SP.  The slide stop also worked well as a slide release which is my preferred technique after shooting 1911s for so many years.

Shooting 300 full power rounds, from a little gun, is a lot of shooting and it will bring out any ergonomic issues. I found that by the end of the day, I had developed a small blister in the palm of my hand. I determined that it was the result of the sharp stippling at the base of the back strap. If I keep the EVO SP, I may take some emery paper and slightly reduce the edges on the back strap. Other than this minor issue, I found the EVO SP CS to be a solid and reliable pistol. The shooter will naturally compare the EVO SP to the SIG 365 and the Glock 43. The photo below gives the reader an idea about the overall size. I found the EVO SP to shoot as well, if not better than the SIG. The EVO’s trigger is significantly better than my Glock 43. 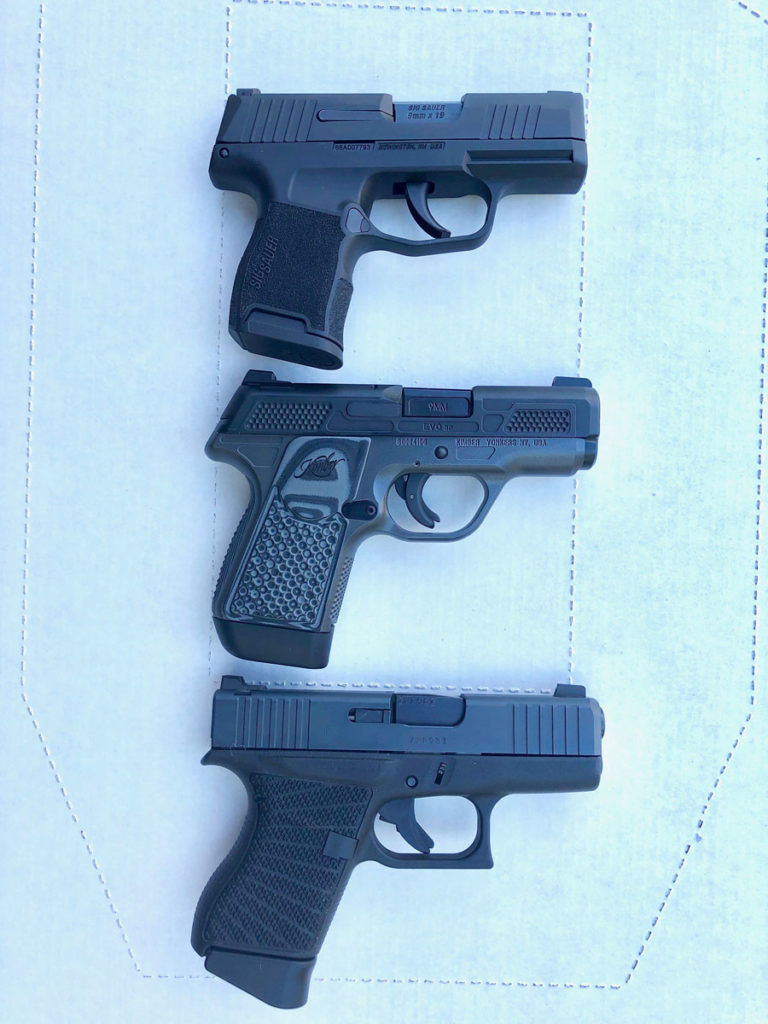 The new Kimber EVO SP CS is shown with the SIG 365 (top) and the Glock 43 (bottom) for size comparison.

The EVO SP Custom Shop model retails for $1,047.  Given that the EVO SP series is an alloy and steel pistol that is reliable and feature-rich, I think that it will be popular with shooters who are not enamored with the polymer wonders.  The next time you stop by your local shop, look for the Kimber display and ask to see an EVO SP.  I think you will be impressed!