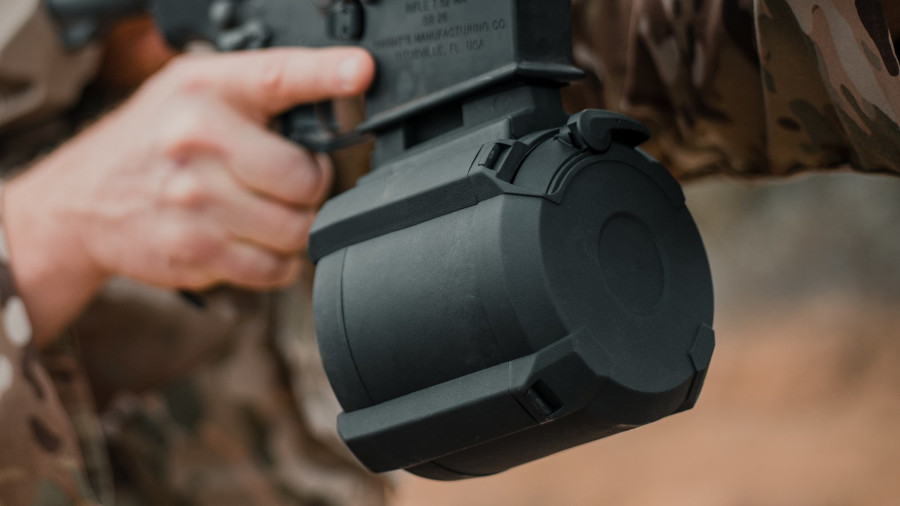 Magpul showcased a series of new products at this year’s SHOT Show, some of them previously teased, others newly unveiled. One of the most anticipated and not-so-secret new products is their D-50 PMag.

The D-50 PMag LR/SR Gen3 is a 50-round drum magazine for large-frame ARs chambered for .308 Winchester. A scaled-up version of their proven D-60, the D-50 packs twice as much ammo as their straight 25-round magazine in a package that, believe it or not, is actually shorter.

That makes it easy to shoot while prone since it doesn’t raise the profile of the rifle. Unloaded the drum weighs 1.7 pounds and with a full 50 rounds of ammo it weighs 4.5 pounds.

Otherwise the D-50 is pretty familiar. It has a crush-resistant polymer body and stainless-steel internals to ensure a long service life. And it can be inserted on a closed bolt.

Initially the D-50 will be offered in black with a suggested price of $149. Typically real-world prices are less, but with hot products like this one it may be a while before prices come down.

Of course that’s not all that’s new from Magpul. The company is expanding with new CZ Scorpion and H&K MP5 accessories as well.

Magpul has a new MOE-pattern pistol grip for the Scorpion, an improved, extended magazine release and a 35-round Scorpion PMag.

The pistol grip is angled more vertically for improved shooter comfort, especially with short stocks and Scorpions in pistol configurations. The extended magazine release can be flipped without having to change positions on the grip. And the 35-round PMag has a 5-round advantage over standard CZ magazines. According to Magpul, it’s more reliable, too.

For H&K fans Magpul has standard and compact SL handguards for MP5s and clones. These handguards have M-Lok slots for accessories and the K-length handguard adds a finger stop for safety and for use against barriers.

Magpul hasn’t released their H&K components but we do know what the Scorpion parts will run. The grip and mag release have $24 MSRPs and the mags will run just $19. Availability for these is expected this Spring with the H&K parts later this year.

For more information on these and all the other new products from Magpul including their updated Daka pouches and Remington 700 chassis head over to the company website.