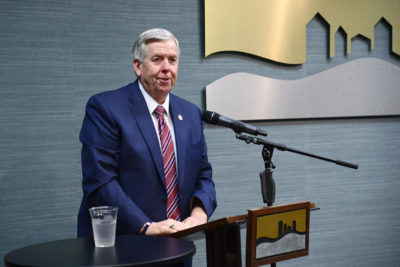 The Show Me State has made headlines in recent years for its aggressive support of Second Amendment rights, but the legislature is now considering the ultimate protection: nullification. The Missouri legislature has reintroduced a bill that would nullify all federal gun control laws within the state and bars state agencies from employing any federal law enforcement official who tries to enforce said laws.

The Missouri House and Senate passed a similar piece of legislation in 2014, but then-Democratic Gov. Jeremiah Wilson “Jay” Nixon vetoed it. Now that a Republican holds the governor’s mansion in Jefferson City, Missouri may well become the first state to bar enforcement of laws that restrict its citizens’ gun rights.

According to the Second Amendment Preservation Act, “All federal acts, laws, executive orders, administrative orders, court orders, rules, and regulations, whether past, present, or future, which infringe on the people’s right to keep and bear arms as guaranteed by the Second Amendment to the United States I and Section of the Missouri Constitution shall be invalid in this state, shall not be recognized by this state, shall be specifically rejected by this state, and shall be considered null and void and of no effect in this state.”

The bill’s authors point out that even though the state governments granted supremacy to the Constitution, respect for the federal government does not require “unlimited submission.” The bill specifies in detail all the types of federal laws and statues that will be null and void within Missouri’s borders and takes thinly veiled shots at NFA tax stamps and firearms registries.

All kinds of federal gun control laws will be void, including

If passed, Missouri’s proposal will no doubt be subject to intense legal scrutiny. But David Kopel,  Research Director of the Independence Institute and Adjunct Professor of Advanced Constitutional Law at Denver University, told GunsAmerica that current precedent allows Missouri to order state and local employees not to enforce federal laws.

However, Kopel also pointed out that precedent does not allow state officials to block federal officials from enforcing federal laws.

The bill’s authors appear to be aware of this prohibition. According to the legislation, federal officials are not barred from enforcing the law, but they cannot serve the state in any capacity.

In addition, if a citizen believes he or she has been targeted by a law enforcement officer for violation of federal gun laws, the bill also empowers the citizen to sue that officer in Missouri.

In 2014, the Missouri House passed a different version of the Second Amendment Preservation Act on a 110-41 vote, and the Senate passed it 29-4. Republicans currently control over two-thirds of both the House and Senate, and Republican Gov. Mike Parsons took office last year. The governor has not indicated whether or not he will sign the bill upon its passage.