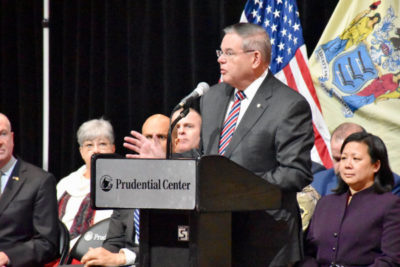 The bill’s primary sponsor in the Senate, Bob Menendez of New Jersey. Menendez is the poster boy for morality. Having once been indicted by Obama’s DOJ for corruption, the good senator has also been accused of having intercourse with underage sex workers and not paying his tab when fornicating with adult prostitutes. (Photo: Sen. Bob Menendez Facebook)

Democrats in the U.S. Congress have re-introduced legislation that would ban Americans from importing, selling, manufacturing, transferring, or possessing all magazines capable of holding more than 10 rounds of ammunition.

The “Keep Americans Safe Act” would allow those who already own standard capacity magazines to keep them, and it would not apply to tubular, .22-caliber magazines.

But it would ban the transfer of outlawed magazines and, over time, eliminate most standard-capacity mags for mid-and-full-sized semi-automatic handguns as well as the most popular mags for semi-automatic rifles.

The bill’s lead sponsors, Rep. Ted Deutch of Florida and Sen. Bob Menendez of New Jersey, held a press conference on Tuesday announcing the legislation. The anti-gun lobby and their supporters in the media were, as usual, firing strange and misleading comments vis a vis fully semi-automatic.

“Guns become doubly and triply deadly in these massacres because of these high-capacity magazines,” said Sen. Richard Blumenthal, another of the bill’s sponsors. “And so if we take one simple step in approving this prohibition, we can literally save lives. There is no more simple, straightforward way to save lives from gun violence than to ban these high-capacity magazines.”

Manny Oliver, who tragically lost his son in the Parkland massacre, couldn’t provide much clarification.

“Have you realized how simple this is to approve? We’re just reducing the amount of ammunition on a gun that you can still carry with less ammunition inside. Is that so hard to understand?” he said.

“We’re not asking, we’re not begging,” Oliver said. “We demand.”

The legislation has yet to receive support from a single Republican lawmaker in the House or Senate. The National Rifle Association also voiced their opposition to the bill.

“This legislation would effectively ban the most commonly owned firearms for self-defense,” said NRA spokeswoman Jennifer Baker. “It is an arbitrary limit pulled out of thin air with no evidence that the limits would improve public safety. In fact the after report from the deadliest school shooting in American history states that magazine limits would have had no impact. This is just more nonsense from anti-gun zealots who are looking to score political points by proposing legislation that would make criminals out of law-abiding citizens exercising their constitutional right to self-defense while doing nothing to deter criminals from committing crimes.”

While the legislation is unlikely to be considered in the Senate, it has secured endorsements from at least five Democratic presidential candidates, including Amy Klobuchar of Minnesota, Cory Booker of New Jersey, Elizabeth Warren of Massachusetts, Kamala Harris of California and Kirsten Gillibrand of New York.

Previous post: The Universal Phobia: Being Afraid To Kill Despite Training, Bearing Arms