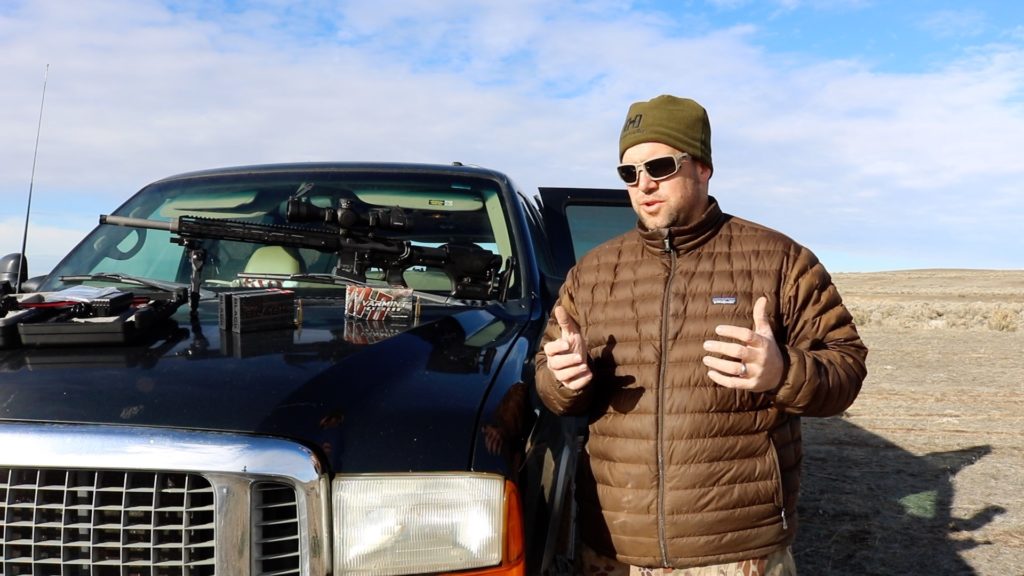 One of the great stories of 2018 was the introduction of a new caliber by Federal, the 224 Valkyrie. Initially announced in October of 2017, by SHOT Show 2018, the world was abuzz. The 224 Valkyrie promised to turbocharge the small frame AR rifle, with ballistics that blew the doors off past challengers such as 6.5 Grendal and 22 Nosler. It helped that it was released and backed by Federal, a giant in the ammunition industry. But still, many people questioned the new caliber? Would it deliver? And would it catch on enough to remain available? 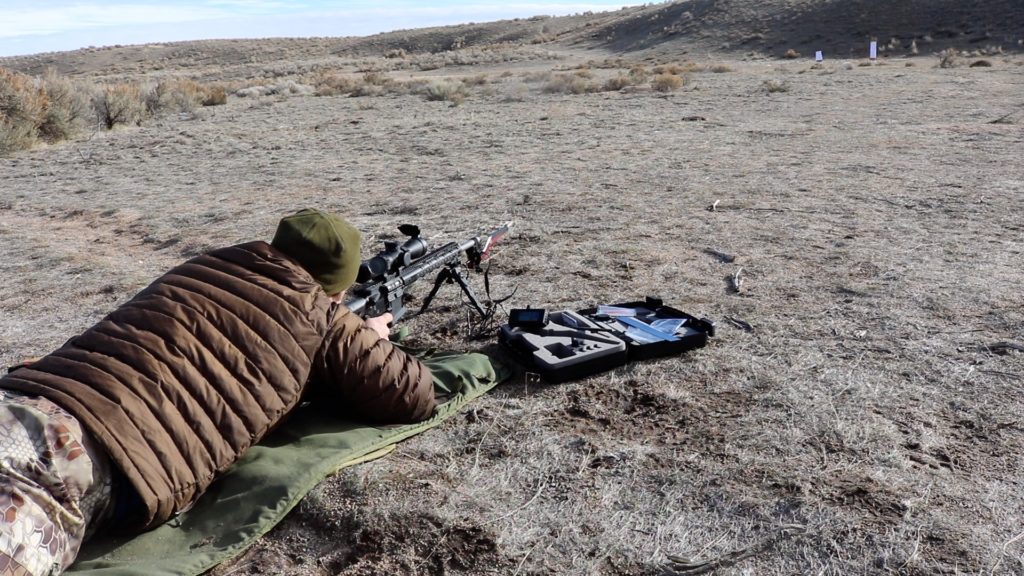 As with any new caliber, those are valid questions. More than a couple of us have a 45 GAP in the back of the gun safe, collecting dust for lack of options. (I actually had a 45 GAP in for review that I returned to the manufacturer unfired last year, for lack of ability to get ammo.) Having been burned before, many of us have a wait and see attitude before adopting anything resembling a wildcat. So it was a huge step when Hornady announced at the NRA Show in May that they were entering the 224 Valkyrie fray, with an 88-grain Match round. 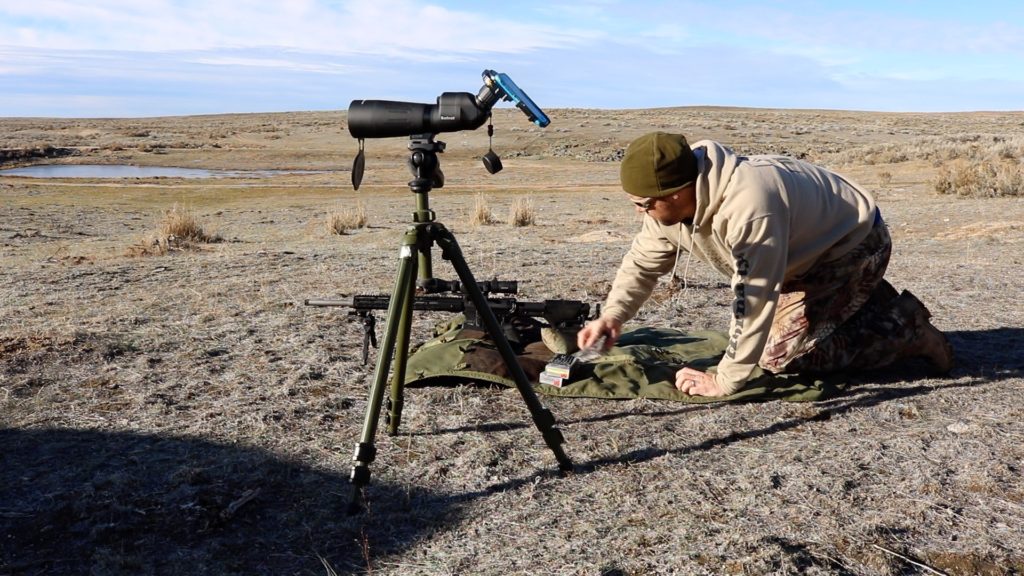 Testing Varmint Express at the range

Hornady is also a Titan of ammunition and components, so this was no small deal. For many consumers, that was the signal that Valkyrie was here to stay. It might be the fastest Hornady has ever adopted a new caliber they didn’t invent, certainly the fastest since I have been in this industry. The 88-grain Match round proved very popular, with Hornady selling out of inventory several times over the summer.

And so it is with much rejoicing that this week, I got my hands on two new loadings from Hornady in the 224 Valkyrie caliber. First is an extension of the BLACK line, a 75-grain boat tail hollow point. The second is a new Varmint Express loading, a 60 grain V-Max. 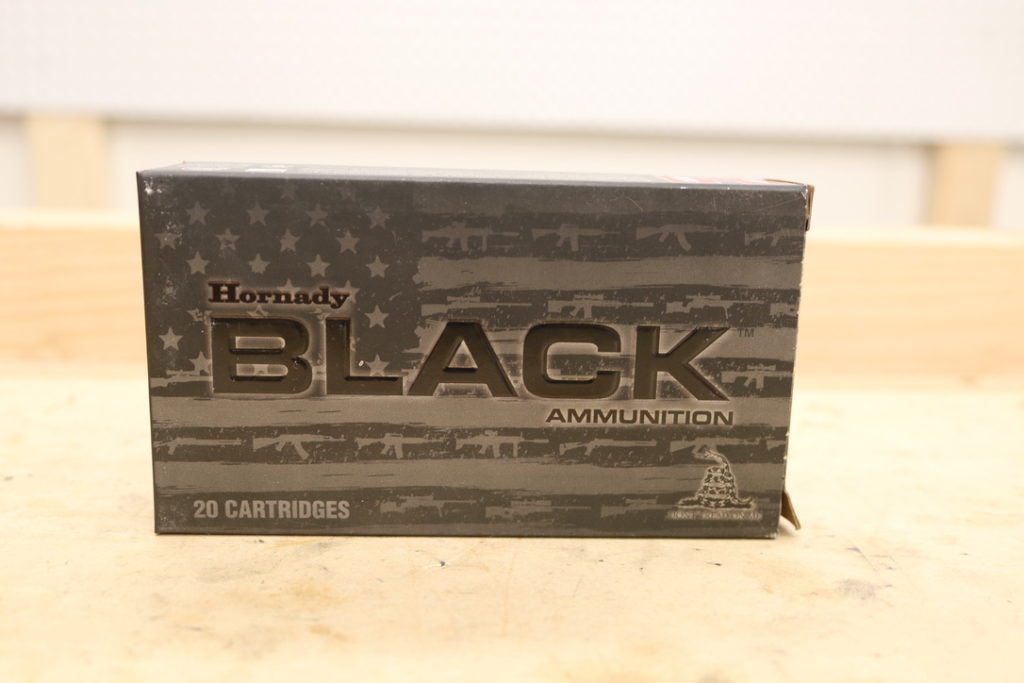 Black is a line of Hornady ammunition geared specifically toward AR’s (or MSR Modern Sporting Rifles in PC terms). Considering the millions of various caliber AR’s in circulation, it made sense for an easily identifiable box of ammo to feed them. Covering everything from 5.45 x 39 to 450 Bushmaster, the Valkyrie fit right in. When you consider the evolution from the 6.8 SPC as a parent case to the 224 Valkyrie, it makes the most sense as an AR cartridge. Other options exist, but semi-auto makes up the vast majority of current Valkyrie firearms. 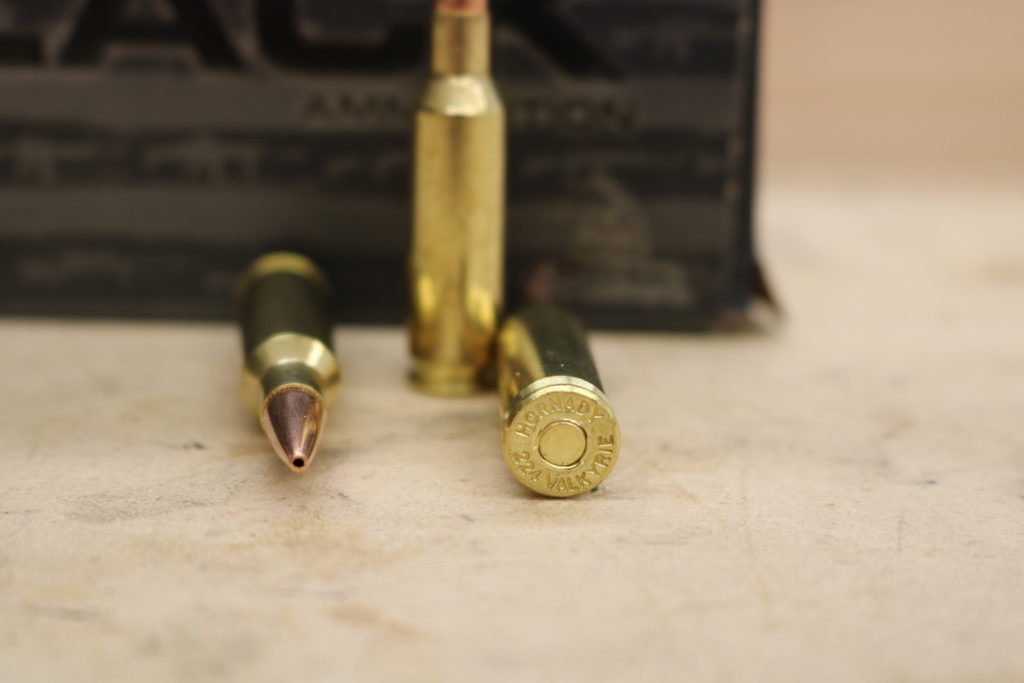 The Hornady Black 224 is a 75-grain boat tail hollow point with a G1 ballistic coefficient of .395. That is significantly less than the 88-grain Match G1 BC of .545, but the Black was designed with a different goal in mind. Hornady advertises a velocity of 3000 feet per second. 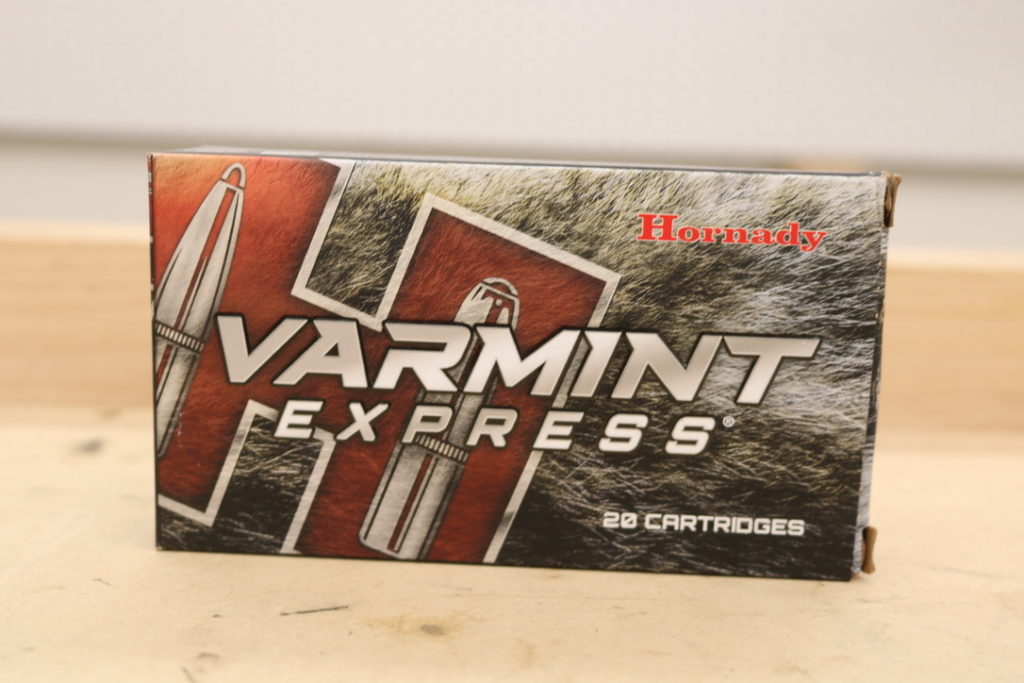 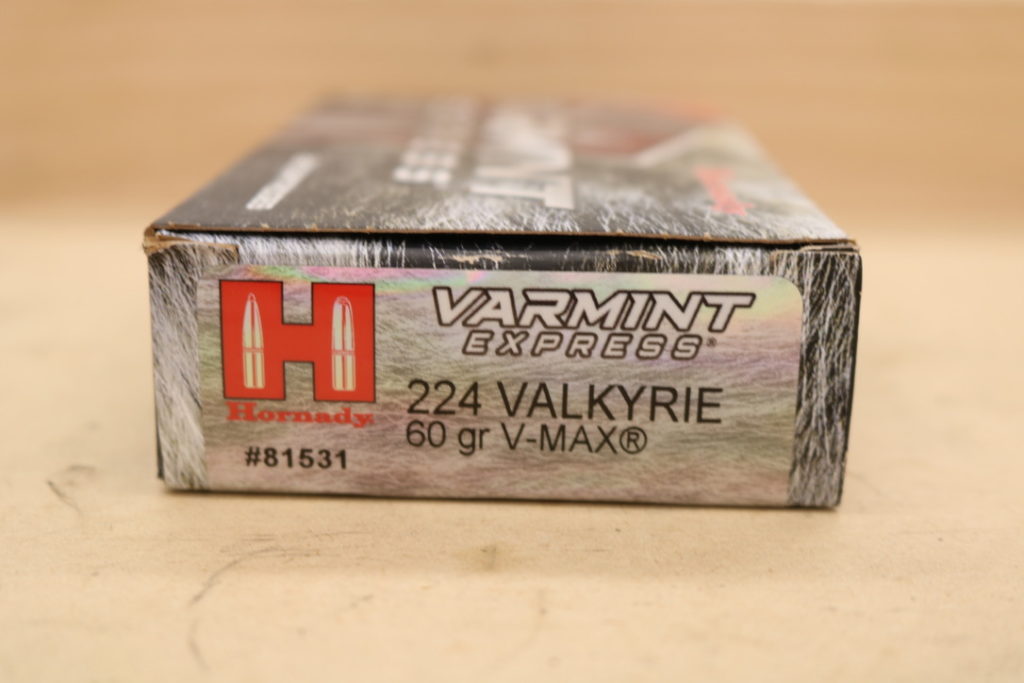 The Varmint Express line needs no introduction, especially to those that live in Western states. The new 224 loading is a 60-grain projectile, the famous Hornady V-Max. The polymer tipped V-Max was designed to combine match grade accuracy with rapid fragmentation on impact. It is absolutely devastating on varmints, making it the weapon of choice from prairie dogs up to coyotes. A few years ago it also yielded very impressive results in its 223 loading on our sheet rock test. 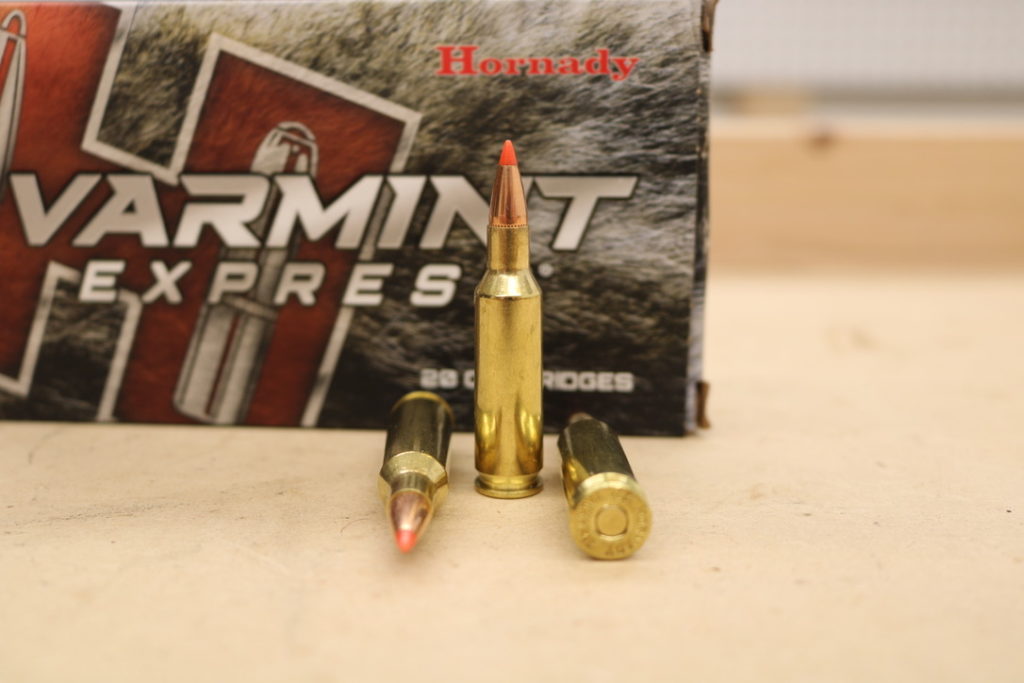 Topped with the legendary V-Max in 60 grain

The light 60-grain loading is near the smallest of the 224 Valkyrie loadings available and predictably has a much lower BC. The G1 ballistic coefficient is .265, so not ideal for reaching the 1000 yard mark. But it is screaming out of the barrel, with an advertised velocity of 3300 feet per second.

For testing, I wanted to know both accuracy and true velocity. The numbers sound great in advertising, but none of us carry a test barrel to the field. For a rifle, I selected my Craddock Precision upper receiver, with a 22 inch 1:7 twist barrel. The jury is still out on ideal twist rate, but my 1:7 has traditionally done very well. It made 1-mile hits with Valkyrie and has shot Hornady Match groups as tight as 1/3 MOA. For glass, I used the new Leupold Mk5, in a set of Badger Ordnance rings. A set up like that takes the variables out of the equation. I was also using a new magneto speed chronograph, thanks to Santa. 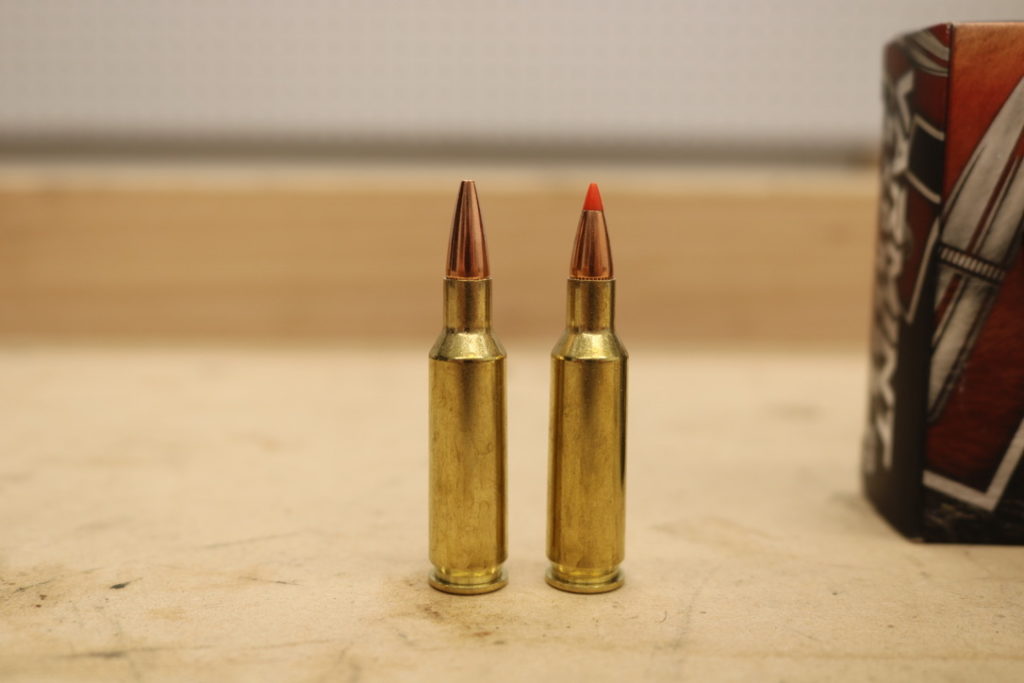 Black and Varmint Express side by side

The Hornady Black produced an average muzzle velocity of 2912 fps, not at all far off the advertised speed of 3000. It had a standard deviation across 10 rounds of 17.7, which is pretty good for factory ammo. Accuracy wise, it would group a 1 1/8th MOA when the shooter did his job. 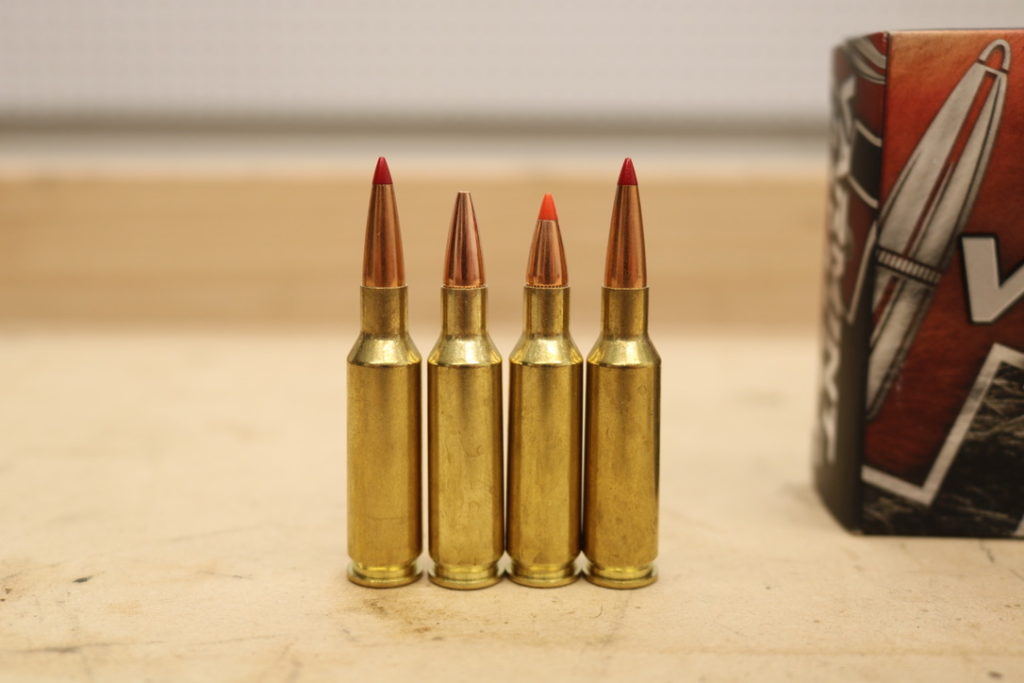 The Varmint Express produced an average muzzle velocity of 3174, again quite close to the advertised spec of 3300. It had a standard deviation across 10 rounds of 13.7. My rifle liked it much better, producing ½ MOA groups all day long. 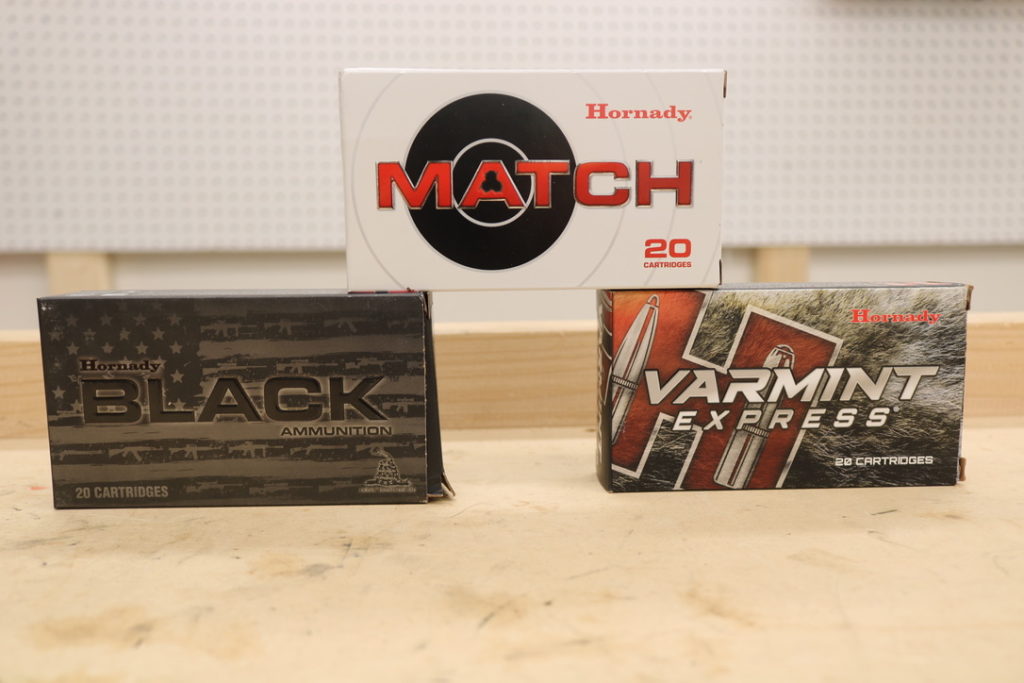 Both of these are excellent rounds, for the application. As a mid-range round, the 75 grain has a nice balance of speed and weight. For rock chucks and the like, the Varmint Express is everything you like about a V-Max, with the velocity turned up to 11. And together, they round out the Hornady 224 Valkyrie family, with the 88-grain Match as the anchor. If you have been waiting to see if Valkyrie would survive, that day is here. I suggest you grab a barrel and some ammo before everyone else figures that out.

Next post: The Assassination of Benazir Bhutto: The Unsolved Murder of the Muslim World’s First Female Prime Minister