NRA Partners with Cordova Coolers in Wake of YETI Controversy 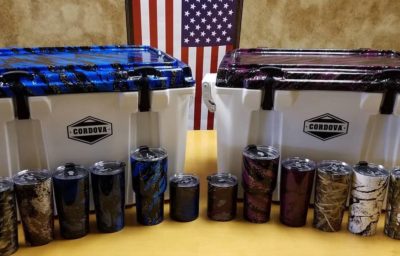 Cordova coolers are made in the USA! (Photo: Cordova/Facebook)

The National Rifle Association announced this week a licensing partnership with Cordova, a maker of high-performance coolers.

“This is an exciting new partnership for us,” said NRA Executive Director for Advancement Tyler Schropp in a press release.

“Cordova is a company that has an unrelenting commitment to the Second Amendment and respect for our freedoms,” continued Schropp. “They build a quality American-made product that stands up to the needs and the lifestyles of our members.”

Based in Idaho, all of Cordova’s coolers come with a lifetime warranty, a testament to their toughness and sound construction. Beyond making premium coolers, Cordova is — as mentioned — an unabashed supporter of the right to keep and bear arms. The “2A Is In Our DNA,” states one of Cordova’s slogans.

The NRA’s decision to work with Cordova comes in the wake the YETI controversy. One will recall that in April of this year, YETI cooler “Suddenly, without prior notice… declined to do business with the NRA Foundation,” according to former NRA president and current lobbyist Marion Hammer.

Hammer said that YETI refused to explain “why” they terminated the relationship, leaving many to speculate that YETI was caving to the post-Parkland anti-gun hysteria.

In its own statement released three days later, YETI challenged the NRA narrative, claiming that it offered the gun lobby a new deal, “an alternative customization program.” Further, the Austin-based company claimed to be “unwavering in our belief in and commitment to the Constitution of the United States and its Second Amendment.”

NRA punched back saying that YETI was doing “damage control” following immense backlash, while also pointing out that YETI failed to make good on existing orders.

“Not only would they not take our orders for more coolers, they forced us to cancel orders already in the system that they said they would not fill,” said NRA.

YETI was slammed with hate. Pro-gun folks even went so far as to shoot up and blow up their YETI coolers on camera in protest of the announcement.

“We have always stood firmly for the Second Amendment and our collective rights to firearm ownership in defense of ourselves, our families and those in need, as well as our right to pursue recreational activities involving firearms,” Cordova owner Doug McMaster said.

“Being selected by the NRA to become the official licensed cooler and preferred vendor of this vital organization is a great honor to all of us at Cordova, and we look forward to helping advance the NRA’s mission to ensure those rights remain intact for future generations of patriotic Americans,” McMaster added.

Next post: Lee-Enfield Rifle: The Long Arm of the British Empire and the story of Lachhiman Gurung