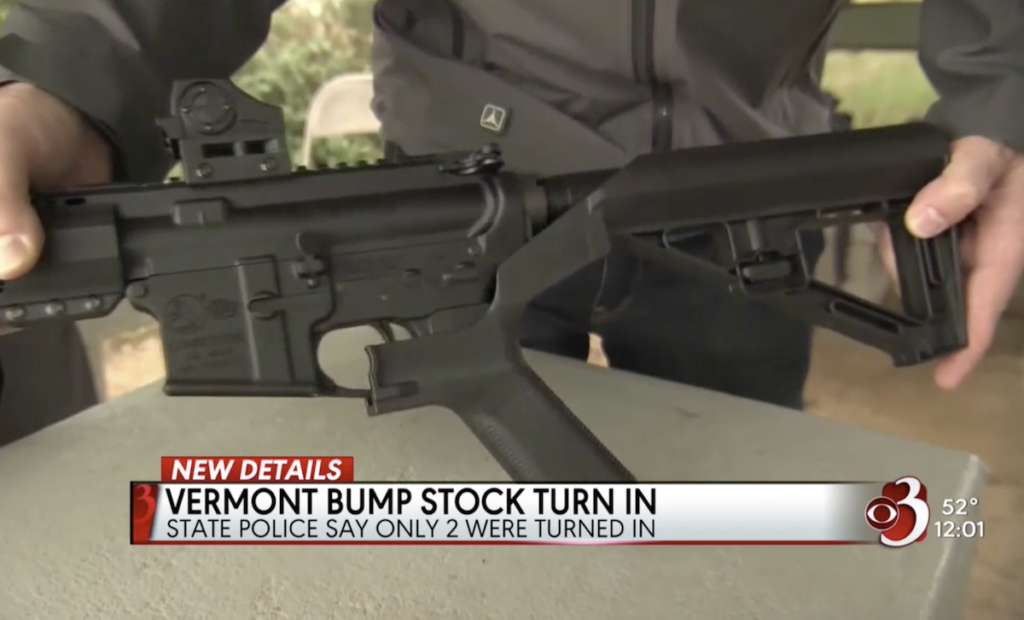 Only 2 bump stocks were turned into Vermont State Police ahead of the Oct. 1 deadline.  Moving forward, those caught possessing bump stocks face up to a year in jail, fines or both.  (Photo: WCAX)

Vermont’s ban on bump stocks has turned out to be an epic failure.

State police told local media this week that a total of two reciprocating stocks were turned in prior to the Oct. 1 deadline. Two! That’s it! For the entire state!

The ATF estimates that there are up to a half million bump stocks in circulation in the U.S. While it’s not clear how many are in The Green Mountain State, it’s almost certainly more than two!

Authorities in Vermont should not be shocked by the poor turnout. Compliance in the other eight states that have prohibited them has also been virtually nonexistent.

Only three stocks had been surrendered by the February deadline in Massachusetts, and as of earlier this year, none (0) have been turned in since Denver and New Jersey banned the devices, as GunsAmerica previously reported.

Henceforth, any citizen caught possessing a bump stock faces up to a year in jail, a fine of $1,000 or both, Vermont State Police Capt. Tim Clouatre told NBC5.

Jim Dattilio, the owner of Dattilio’s Guns & Tackle, said these new laws are going to hurt his bottom line because he is sitting on inventory he can no longer sell to Vermonters.

“(My business) will take a wicked blow because, all the magazines I have in the shop, I can’t sell those anymore to anybody from Vermont,” he told NBC5.

“The only thing that I’m sad about is that the law-abiding citizens that purchased those (bump stocks) now have to give them back and in doing so (the state is) not going to give them what they paid for them, which is really stealing,” Dattilio explained.

Gun Owners of Vermont, a pro-2A group based in Saxtons River, is challenging the bump stock ban in court. It filed a lawsuit in Windham County Superior Court on Aug. 21, 2018.

Dattilio said he will be keeping an eye on the case as it makes its way through the courts. But he also said that this latest wave of gun control is working to push folks out of Vermont.

“Most of my clientele is moving out of this state. They’re going to a friendlier tax state such as Florida, Tennessee, North Carolina and Texas. This state better wake up because I’ve lost a lot,” Dattilio said.

Next post: Adult-Sized Daisy Red Ryders? Shoot Your Eye Out Again For A Limited Time