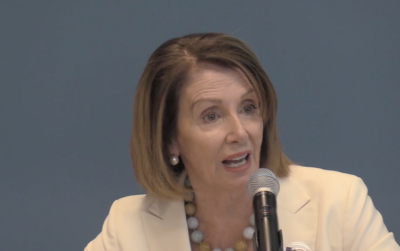 A lot’s at stake this November. If the Democrats win the House — political forecaster FiveThrityEight gives Dems an 81 percent chance of taking control following the midterms — Nancy Pelosi (D-CA) promised that criminalizing private transfers will be a top legislative priority.

During a sit-down this week with U.S. Rep. Ted Deutch (D-West Boca) of Florida, survivors of the Parkland massacre, and gun control activists, the House minority leader spoke about both the importance and political feasibility of enacting universal background checks.

“What saves what saves the most lives is the background checks — keeping guns out of the hands of people who should not have them, whatever the weaponry,” said Pelosi who also expressed support for banning modern sporting rifles in a video posted by the Sun-Sentinel.

Pelosi indicated that there was bipartisan support for universal background checks, which would make it unlawful for one private citizen to transfer or sell a firearm to another private citizen.

“The people will want us to consider what this bill will look like. We have a bill right now that is bipartisan,” Pelosi said explained. “This will be a collaboration and will be a consensus to have the bipartisanship we need to build on the legislation.”

The last bipartisan universal background check bill to gain steam in Congress was drafted by Sens. Joe Manchin (D-WV) and Pat Toomey (R-PA). Known as the Manchin-Toomey amendment, it was defeated in the Senate on April 17, 2013, falling six votes shy (54-46) of the 60 needed to overcome a Republican-led filibuster.

Nationwide 20 states have background check laws tougher than the federal standard, 11 of which criminalize private transfers for the sale of all firearms, according to the Giffords Law Center.

The National Rifle Association has vehemently opposed expanded background checks. In an NRA-ILA post dated August 8, 2016, the gun lobby laid out all the reasons to oppose amending the law: