Proper Way to Use Cover 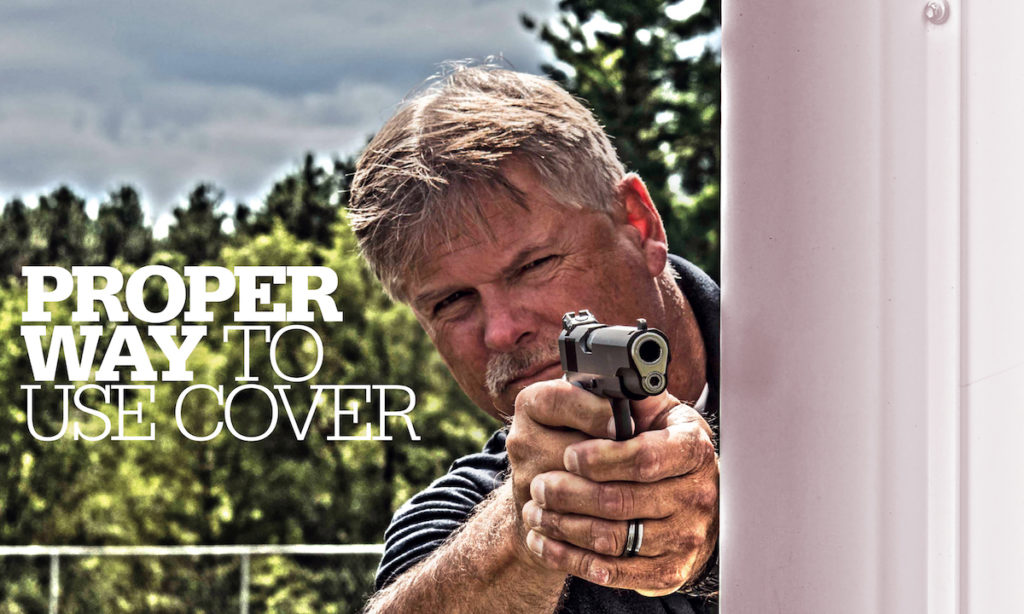 Editor’s Note: The following is a syndicated article by author Kevin Michalowski that first appeared in USCCA’s Concealed Carry Magazine Volume 10, Issue 7, October 2013 under the title, “Proper Way To Use Cover”

You will hear lots of people say the first rule of a gunfight is: Have a gun!

Well, that’s good thinking, but I suggest the first rule of a gunfight is: Don’t get shot! You see, getting shot can greatly reduce your chances of surviving the gunfight. And, while some might call it semantics, I further contend that you can be involved in a gunfight even if you don’t have a gun. In that situation, my rule about not getting shot becomes all the more important.

So, there are a couple ways to ensure you don’t get shot. The first is to practice effective situational awareness at all times. Pay attention. Move away from danger. Be on the lookout for possible threats, escape routes and effective cover.

This might be a good time to define cover and the difference between cover and concealment. Cover will stop bullets (and not just incoming bullets; more on that later). Concealment just gives you a place to hide. If concealment is all you have, by all means use the concealment, but be looking for cover and get there if you can.

In my training as a police officer, I watched one amazing video of an officer and a subject trading shots over a chain-link fence. The fence had those plastic privacy slats installed and the bad guy would pop up, fire a few shots and duck down. The officer at first tried to catch the bad guy as he popped up, but after about the third time, the officer realized where he was and put three rounds through the fence, ending the fight. The bad guy had concealment, not cover. So, be looking for cement walls, brick walls, an earthen berm, a file cabinet filled with papers, the engine compartment of a car or truck. Don’t count on the doors to stop bullets.

Learning To Shoot Behind Cover

Once you have found good cover, you need to know how to properly utilize it. First of all, don’t get too close to the cover. Your instinct will be to snuggle right into the thing you believe is protecting you. Fight that instinct. Stay back a couple of feet from the cover. There are several reasons for staying back from your cover. The first is that you can better use the angles to your advantage.

Secondly, the distance gives you a bit of protection if the incoming rounds impact your cover and fragment or send pieces of that cover your direction. The same is true for outgoing rounds. Remember, I said cover stops bullets? Well, it has happened that people too close to their cover have shot their own cover. If you are too close, those fragments can really ruin your concentration.

The question is: How can we train for this? What drills can we run? First off you need to find cover (Get it? You are going to need to take something that represents cover to the range). You can use 55-gallon drums, or you can attach tall pieces of thin plywood or thick cardboard to target stands. For training purposes, these represent cover. In real life they are concealment.

Now, to learn to effectively shoot from behind this cover, set up your cover directly in front of your target. Approach and stop at least one arm’s length, but not much more than three, back from the cover. We will start from a standing position. Assume your firing grip and stance, pointing your pistol directly at the back of your cover. Establish your sight alignment and, maintaining that, lean to your right until the target comes into view. Establish your sight picture on the target and fire two rounds. Return to cover.

We are talking about leaning; basically shifting your weight, bending at your waist and “rolling” out until you find the target. You may have to move your feet, that’s fine. The goal is to expose as little of yourself as possible, enforcing that first rule, so that you, say it with me, “don’t get shot!”

Of course there are some more rules. The next one being that you cannot emerge from cover at the same place twice. So, now I want you to switch sides. This becomes a bit more difficult as you will see when you try it. Remember to move your feet, lean to the left and “roll” out there to expose only enough of yourself to get a safe shot past the barrier to the target. Fire two rounds and return to cover.

In order to give you more options, change levels: go to a high kneeling position behind the cover. At different schools I have been taught different ways of kneeling, so I will present what works for me. If I am going to lean out to the right, I put my right knee forward and in the up position. Again, remember to keep that leg behind the cover and lean at the waist. You should also push a bit forward as this helps you to keep balance. When you move to the other side, reverse your feet.

Now you have four different positions you can use for shooting from behind cover. Remember, never emerge from cover at the same place twice. Change elevations and sides between every string of fire. Also remember, this is just training. In the real world cover will not be a perfectly formed barrier on a range. Think tactically and ensure you conform to your cover. Any part of you sticking out could get shot off. You want to limit that.