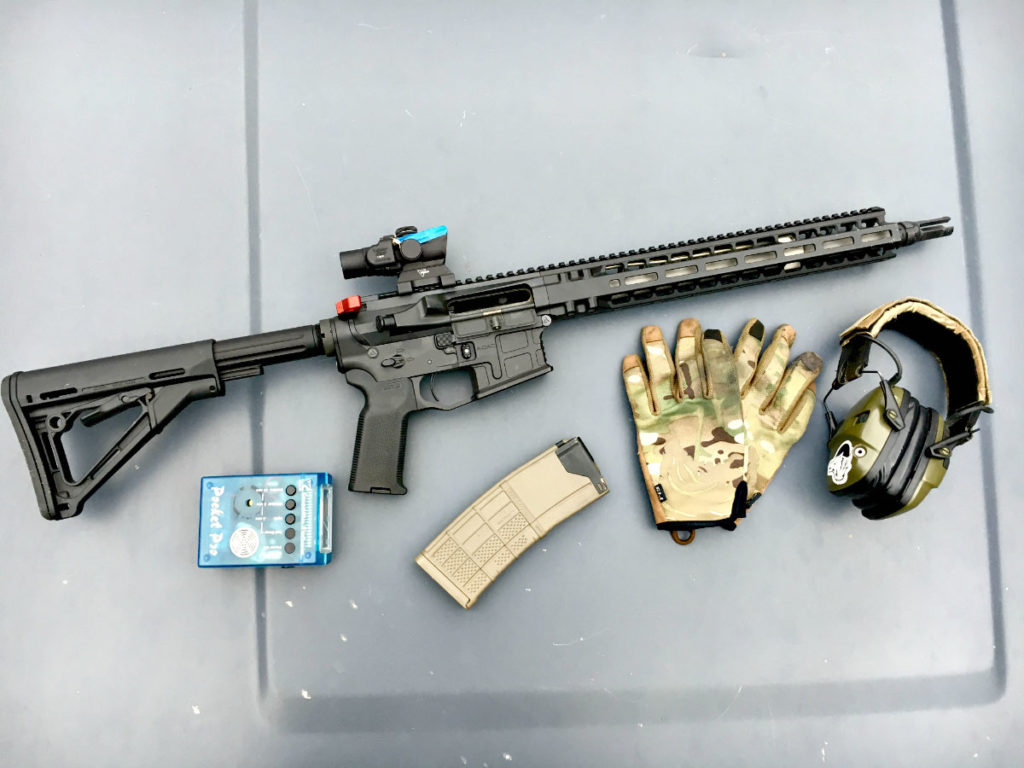 The Radian Model 1, ready to put in some work at the range.

While I have used a lot of different AR pattern rifles, the Radian Model 1 with their ADAC system stands out to me.  I first saw it during Triggrcon 2018 in Bellevue, Washington. And to be honest, it blew my mind. I was asking myself how I never had seen this till now, since apparently it was first introduced around 2010, under the name AXTS.

I’m talking specifically about the A-DAC (Ambidextrous Dual-Action Control) system.  It takes the idea of ambidextrous controls to the next level.  Rather than having an “Ambi” lower, which in most peoples minds means you have a left side magazine release, Radian actually made it ambidextrous in a pretty incredible way. 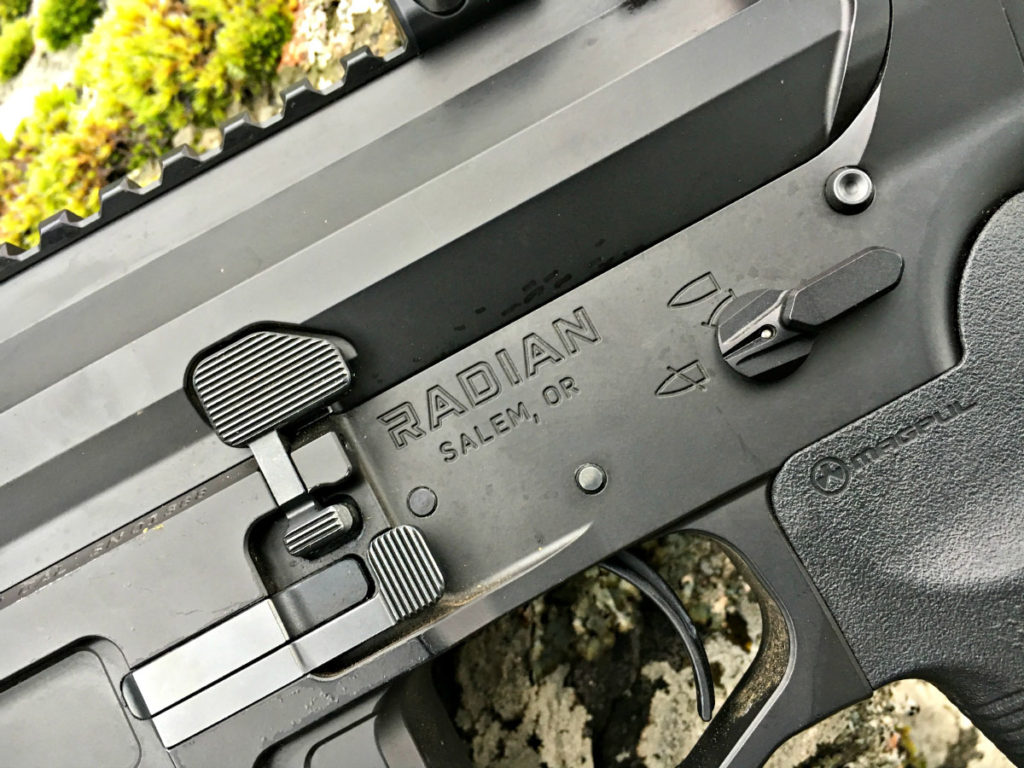 I love the attention to detail on the lower to include an oversized bolt release. 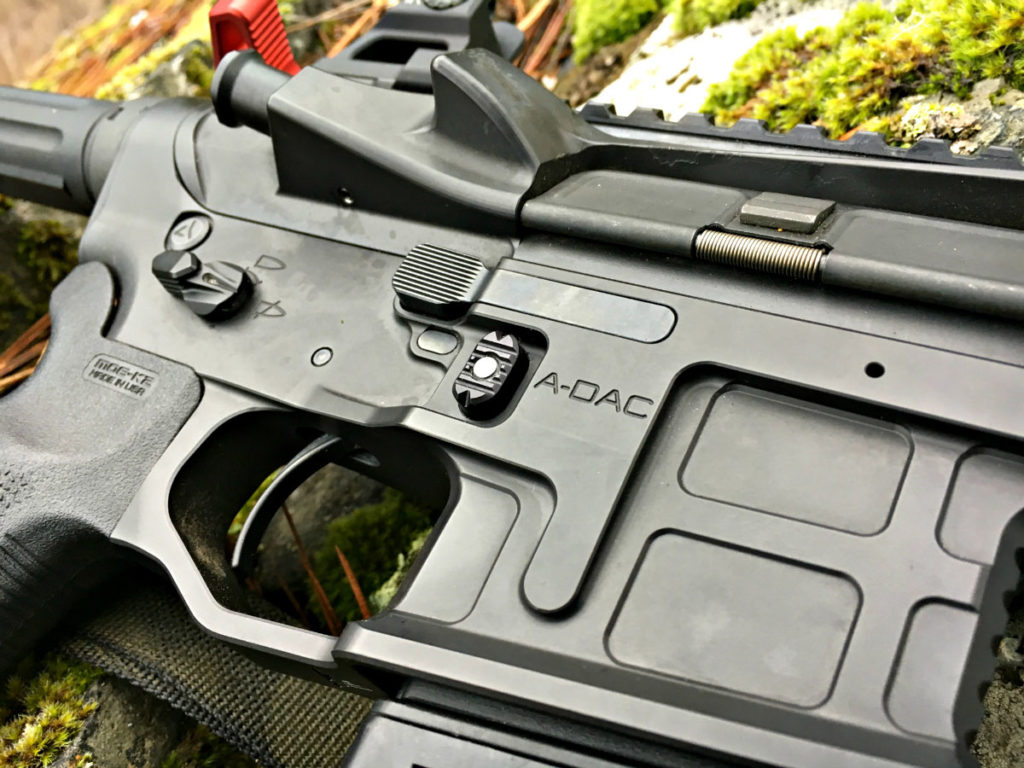 The right side bolt release is easily reached by your trigger finger, making for fast reloads.

Why is this incredible and mind-blowing for me?  Because it streamlines the entire manual of arms for one of the most critical, and often never practiced, tasks you can have with a rifle.  Clearing a malfunction, specifically something nasty like a double feed.  Keep in mind, if you are putting some holes in paper at 25 yards on a sunny afternoon, this might not be a big deal for you.  But if you, and your fellow teammates, lifespan is predicated on how fast you can get that gun back up and running, it turns into a really big deal.

Traditionally if you had a malfunction that couldn’t be fixed with Tap, Rack, Bang, say for example a double feed, it went something like this.  Attempt to fire, weapon doesn’t fire, identify the malfunction (if you did or didn’t TRB), see you have a double feed, remove the magazine, take your hand off of fire control to grab the charging handle, move your left hand to the receiver to depress the bolt catch, pull the charging handle to the rear and lock it back, shove your hand in the mag well or ejection port to push the rounds free, possibly run the bolt with the charging handle a few times to remove a round in the chamber if needed, reinsert a magazine, charge the weapon and press on. 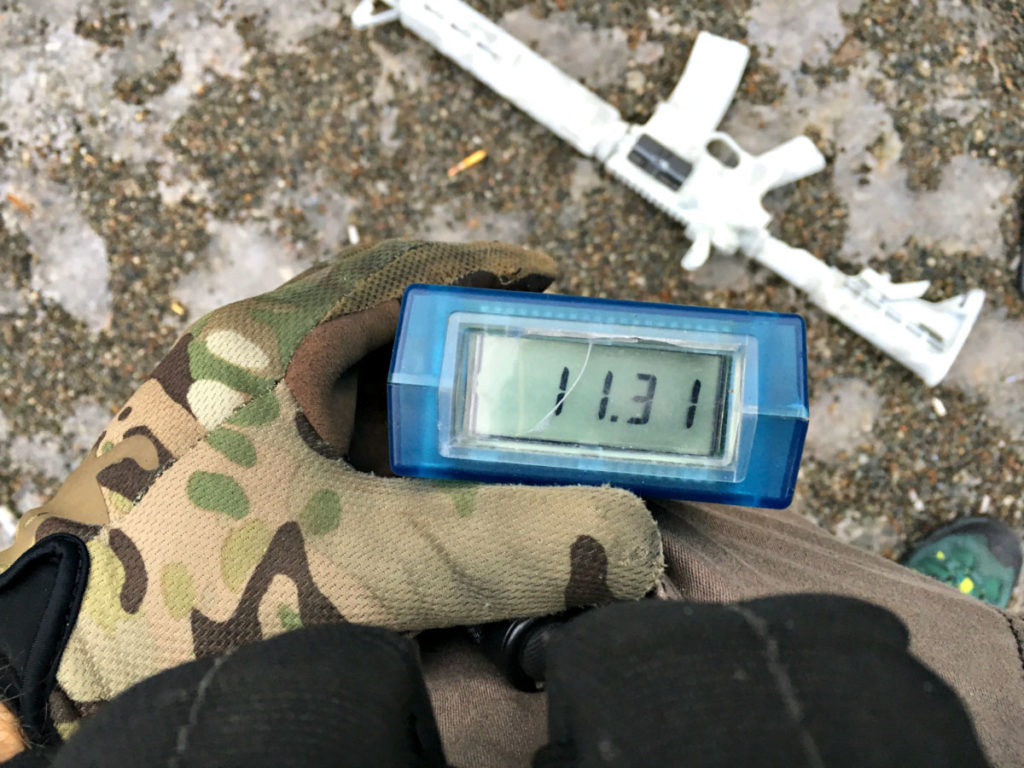 Using a standard AR-15 patterned lower receiver, I could only get my times down so low.

During that procedure, we’ve not only removed our primary hand from fire control, but we’ve spent a lot of time doing so as well.  Where this is groundbreaking is that my hand never leaves fire control and I’m able to complete all of those actions in a much shorter period of time. 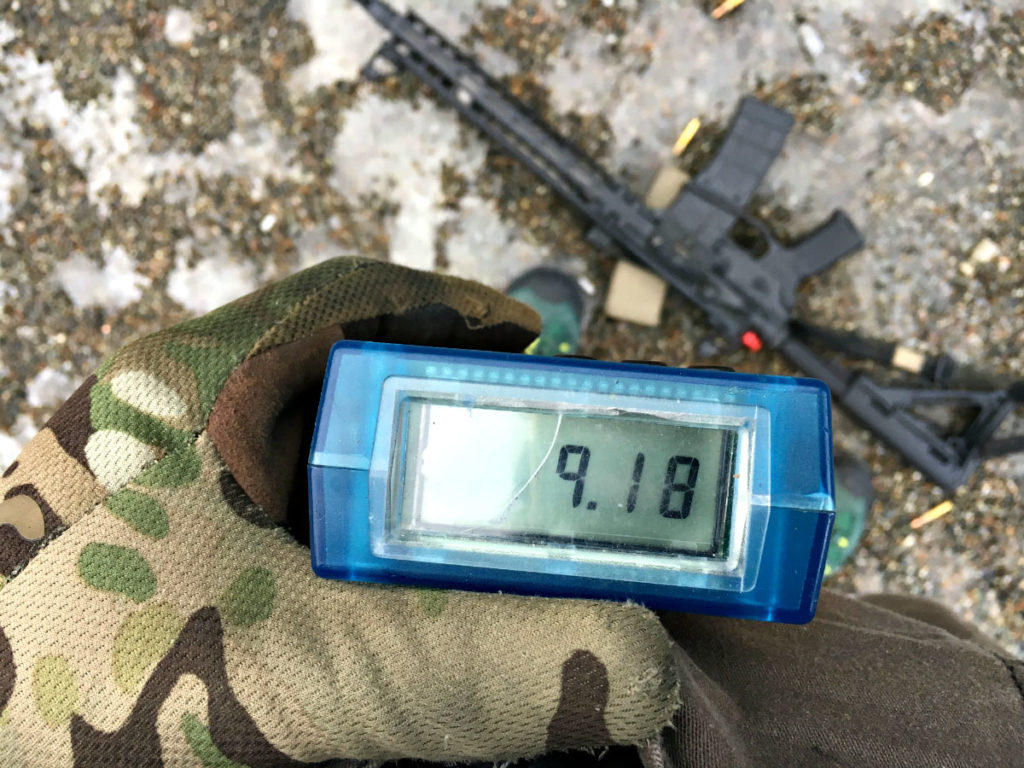 Using a standard pattern AR, for me to clear a double feed malfunction takes 11.97 seconds (averaged over 6 repetitions).  Conversely, using the Radian Model 1 with the ADAC Lower Receiver, my average time to clear a double feed over 6 repetitions is 10.22 seconds.  That is 1.75 seconds faster on average.  Does this matter to most people?  Probably not, but a lot can happen in about 2 seconds…

While I recognize the ADAC lower may not be a huge deal for a lot of people, the rest of the rifle has a lot going for it as well.

Overall, the entire rifle is polished, for lack of a better word.  The billet machined upper and lower receivers are well designed and executed.  Very nice aesthetics and well thought out execution throughout.  The way the upper receiver meets the MLOK rail is smooth and solid.  Making a rock solid rail system should you need to mount zero-able accessories like lasers. 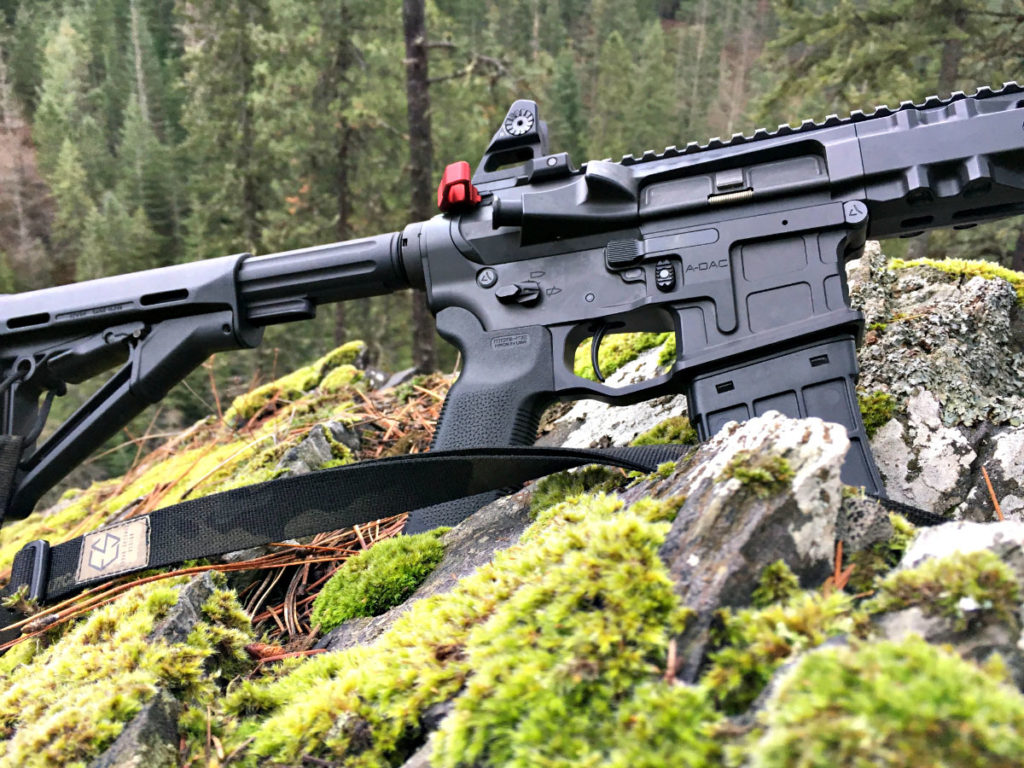 While some people may not mount lasers on their rifles, the Model 1 offers an incredibly rigid rail system for just such attachments.

All the little details as well.  The takedown pins, while not loose, can be pushed past the detents easily without undue force.  The castle nut is properly staked.  The fact that the QD endplate has a steel insert in it rather than just aluminum, which will get worn out in short order.  Or the fact that on top of Mil-Spec Hard Coat Anodizing, the rifles are all cerakoted together, receiver set and hand guards, ensuring the colors match.

As one would imagine, the rifle comes with all the other goodness you probably already know Radian for.  Such as their Raptor Ambidextrous Charging Handle and the Radian Talon Ambidextrous 45-degree Safety Selector (which is crazy smooth and distinct at the same time). 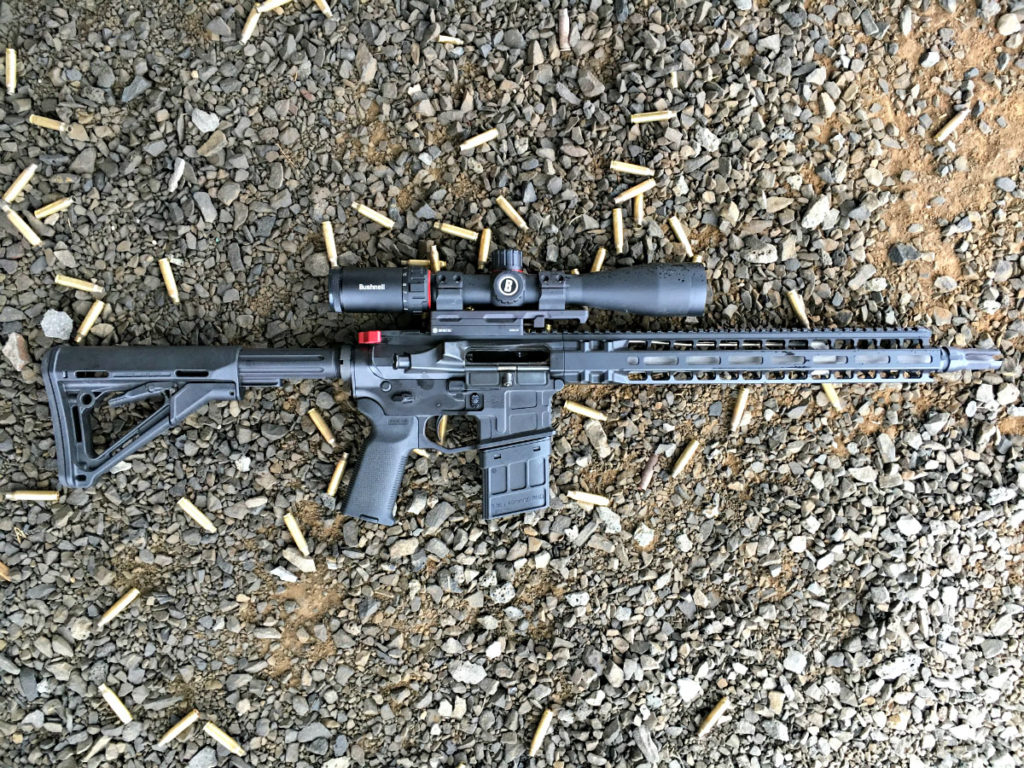 Depending on your use, you can mount any type of optic on the rifle. I did accuracy testing with a Bushnell Nitro 4-16 FFP optic.

Radian doesn’t make triggers, but they do know how to pick them for their rifles.  The Model 1 comes with an ATC (American Trigger Company) AR Gold Match Grade Trigger.  This trigger is super smooth and crisp at about 3 lbs. (adjustable if you want) with a very clean short reset.

Of course, all these things we’ve mentioned really don’t mean anything if the rifle doesn’t shoot.  So at the heart of it, we need a good barrel.  Radian delivers on this as well.  The Model 1 comes with a Match Grade 416R stainless steel barrel with polished crown and feed ramps, chambered in .223 Wylde/5.56 NATO with a 1/8 twist.  And carries a Sub-MOA guarantee with Black Hills Match Grade Ammunition. 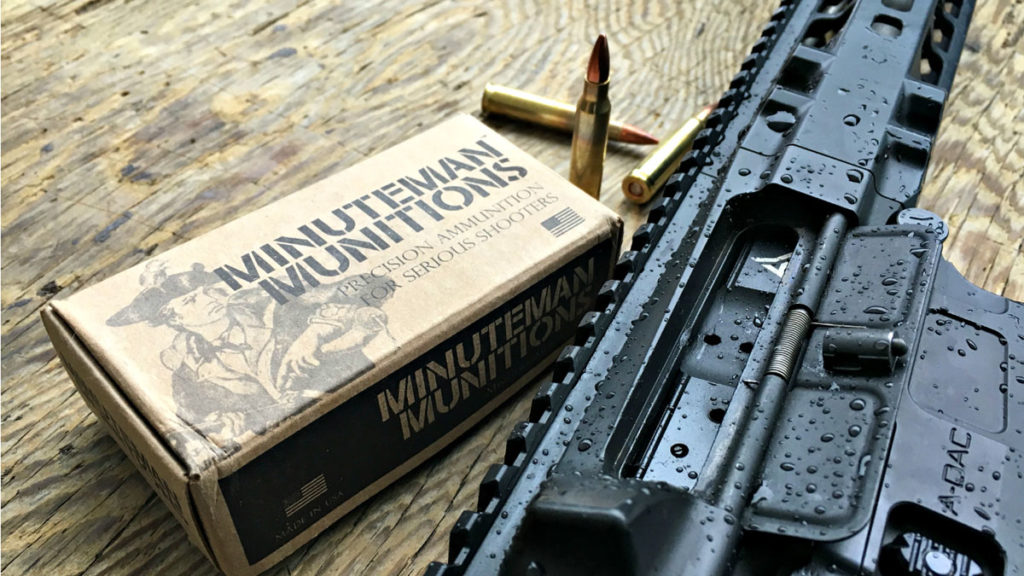 Let’s be honest though, all that stuff sounds great on paper right?  How does this thing actually perform on the range though?  Are all the bells and whistles worth the price of admission?  Here is my experience…

Late 2018 I had the opportunity to go compete in The Tactical Games held in Fayetteville, North Carolina.  While I own rifles, I was looking to try something new.  So I had made arrangements to compete in the 2-day event with a rifle that was supposed to get shipped to me about a month before the competition.  Long story short, that company dropped the ball and left me hanging in the wind.

After picking up the Model 1, I then topped the rifle with Scalarworks PEAK Sights and a LEAP mount holding a Trijicon RMR.  The day before the competition I met up with Spiro at Minuteman Munitions to pick up some ammo and zero the rifle.  Using his Elite 5.56 (55grn  M193) I got a solid 50-yard zero with my iron sights and RMR.  The following morning started Day 1 of the competition… 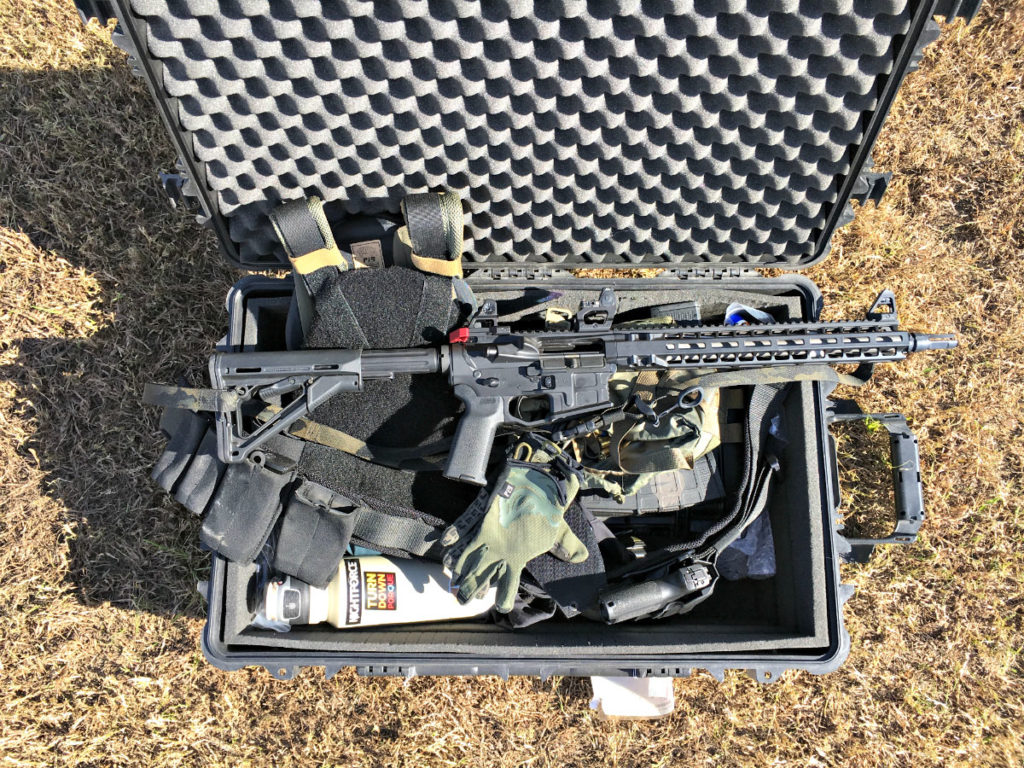 Model 1 played an important role in my performance at the 2018 Tactical Games.

Fast forward 2 days and 7 events and I came in 2nd place in the Elite Division of the Tactical Games.  Was it the rifle?  In part, along with everything else.  The reliability and accuracy of the rifle absolutely contributed to my success.  Being confident in my zero, the rifles ability and the nice clean trigger allowed me to brake shot after shot as soon as my sights would settle on target.

Since then I have continued to train and spend time with the rifle.  To include doing some accuracy testing with various ammunition.  In my experience, their Sub-MOA claim absolutely stands true.  If I do my part, the rifle does its.

While I didn’t shoot any Black Hills ammunition through the rifle, I shot a few other manufacturers.  The 223 Remington Match 69gr HP BT by PPU would hold about a 1” 5 shot group at 100 yards. 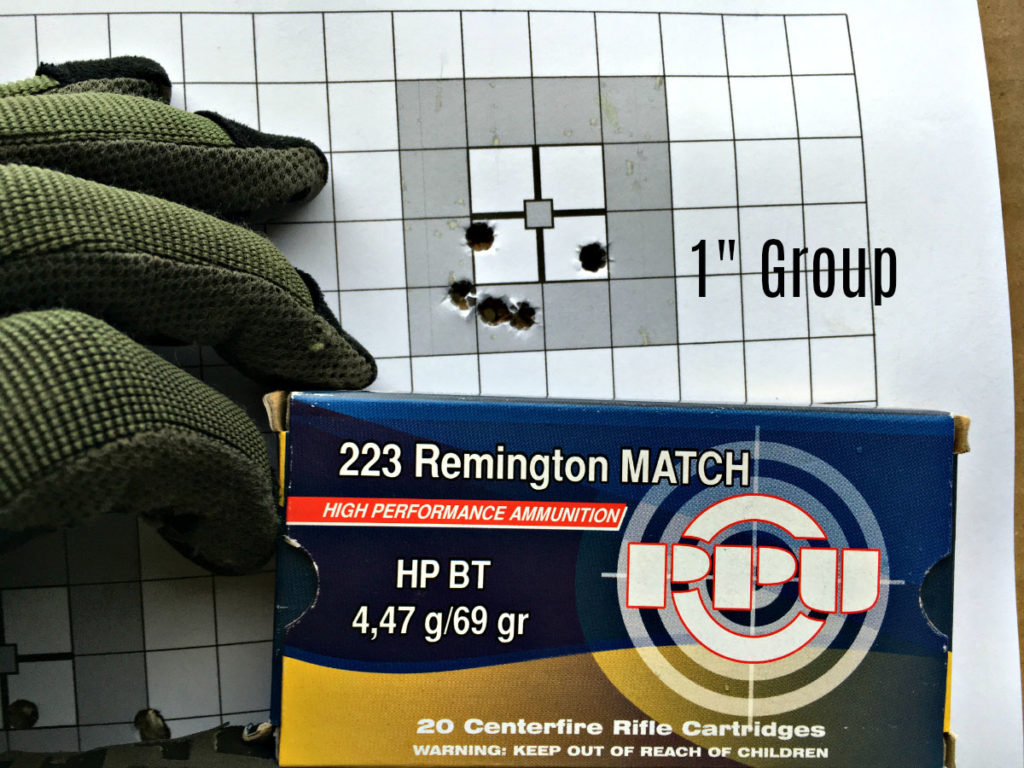 The accuracy with this load proved consistent with their claim. 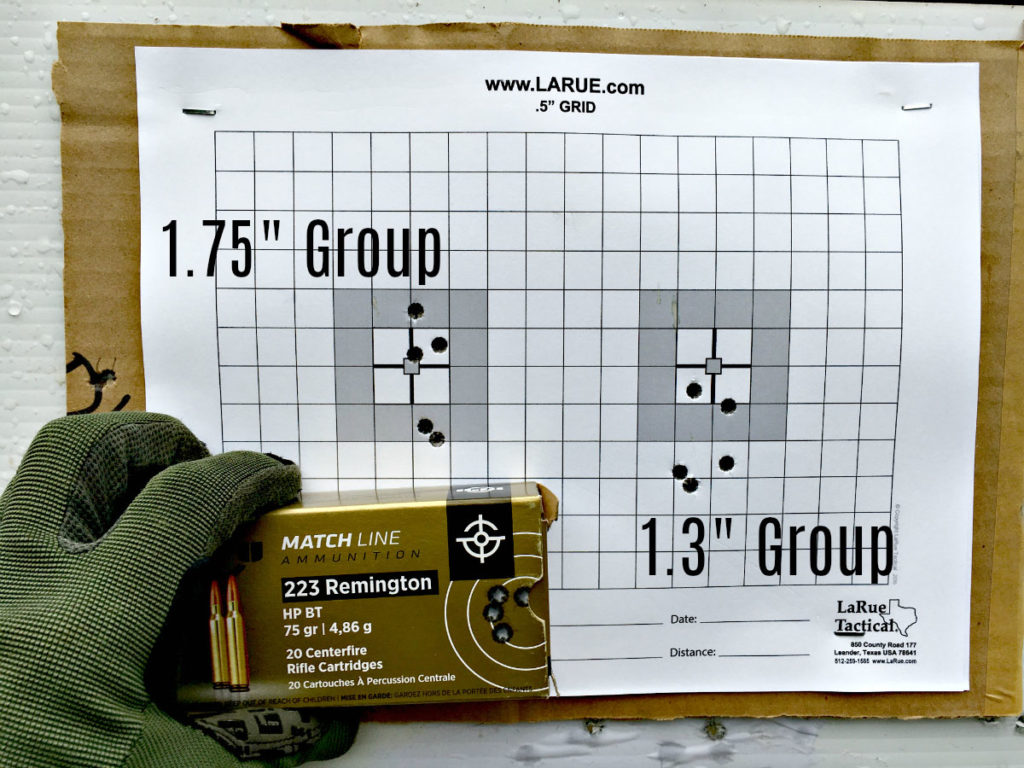 Whether it was me or the ammo, the 75gr did not perform well for me. 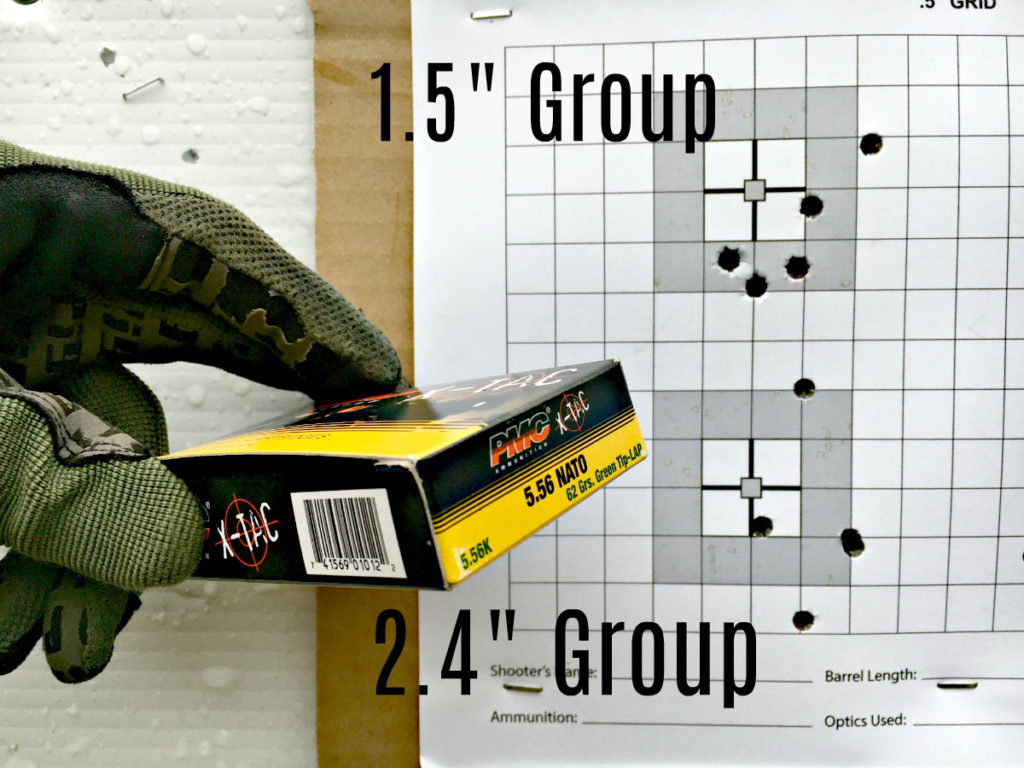 The best performing for me was the Minuteman Munitions 223 68gr BTHP ammo using the Hornady Match AMP projectiles. Giving me groups from 1.5” down to .8”. 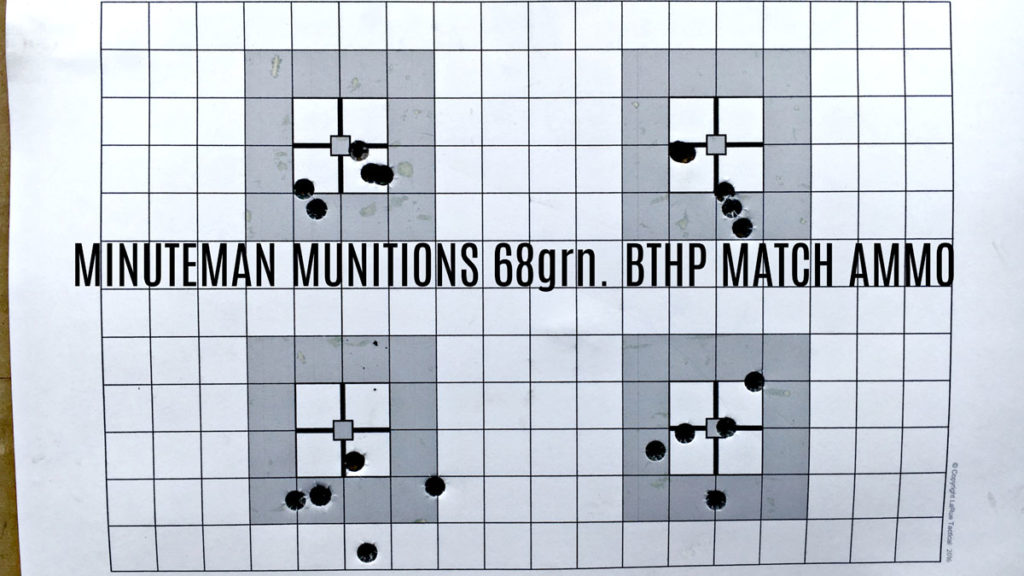 While the groups vary in size, it is probably more the shooter than the ammo. 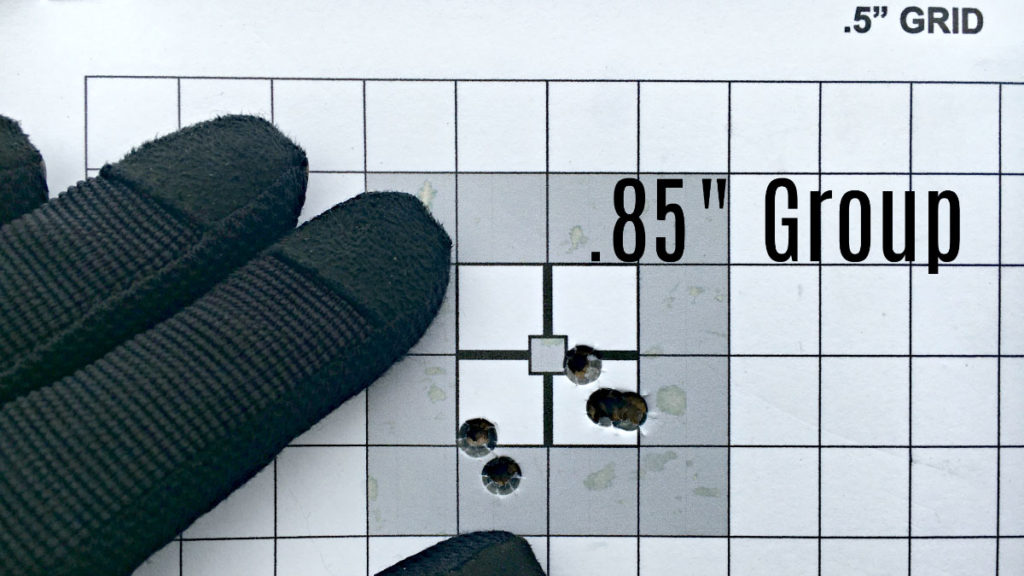 This was my first group at 100 yards using the Minuteman Munitions ammo. 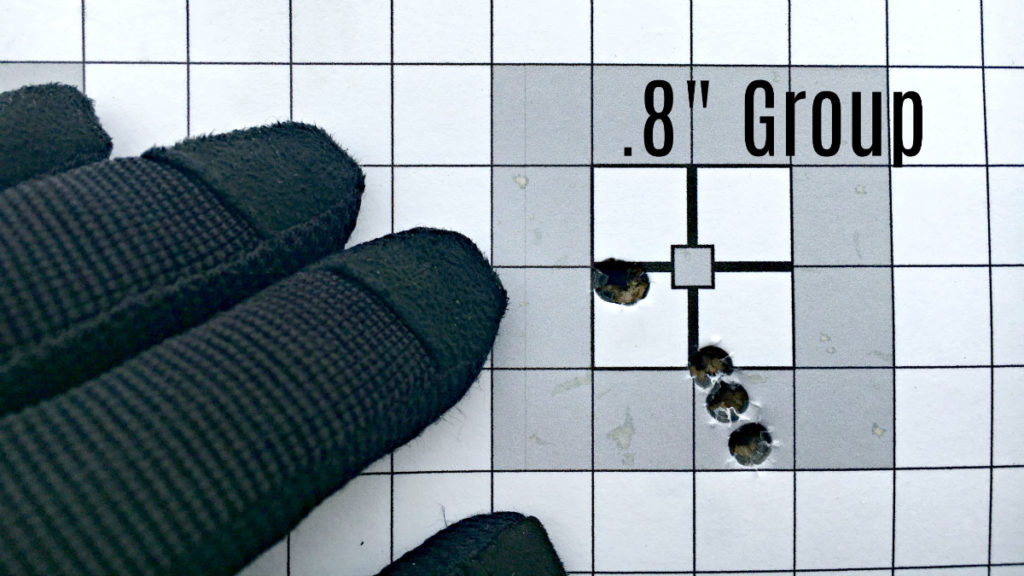 The ability to hold good groups pays dividends when you push to further distances.

Largely the biggest factor in all these groups was me.  But if I did my part, the rifle absolutely performed.

Overall the Radian Model 1 is an amazing rifle. Is it for everyone? Probably not. On the one hand, it is an expensive rifle. The Model 1 runs about $2,500. While I am sure there is sticker shock, appreciate what goes into this rifle. The amount of machining required on the lower receiver is significant and on top of that, every detail is taken into consideration. But for those looking for a production gun that borders on custom, I’d take a hard look at the Model 1.