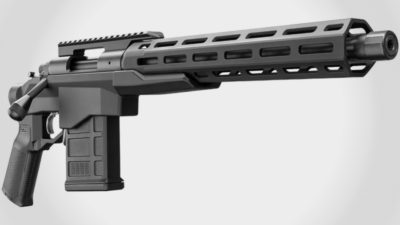 The upcoming 700 CP decked out with Magpul accessories and an M-Lok forend. (Photo: Remington)

Remington is teasing a new take on their Model 700 PCR; meet the Model 700 CP. The 700 CP, or Chassis Pistol, is a lightweight, bolt-action hunting handgun chambered for rifle cartridges.

The first models will be chambered for .223 Remington/5.56 NATO, 300 AAC Blackout and .308 Winchester. And even though they are optimized for taking game, these guns look like they’d be a lot of fun at the range, too.

The .223 and 300 BLK models have 10.5-inch barrels while the .308 is a bit longer at 12.5 inches long. They’re threaded for use with muzzle devices and suppressors. They all use AICS-pattern magazines and ship with Magpul P-Mags. They also come with Remington’s X Mark Pro adjustable trigger.

The bolt-action pistol has been in use by hunters for years. They are handier than full-size rifles in rough terrain and lightweight for backpacking. They also move in and out of vehicles more easily. 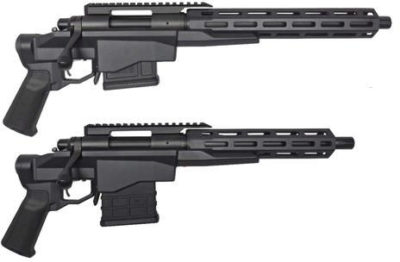 Another plus is that a lot of wildlife management agencies give handgun hunters a head start during hunting season. With the 700 CP hunters can bring a lot more gun with them into the field, especially when compared to the majority of standard handguns, including a lot of magnum revolvers.

Like the full-size PCR, the CP guns match the proven Remington 700 action with a completely modern, modular chassis. The chassis features a free-floating handguard with M-Lok slots for accessories. Instead of a stock, the chassis has an end cap with a quick-detach sling swivel socket.

The design incorporates an extended 12-o’clock rail for directly mounting optics. Optics are a must for these kinds of pistols. While they’re not meant for shooting at rifle ranges, they will shoot farther and flatter than any conventional handgun, and more importantly, they don’t have iron sights.

There are plenty of solid long eye relief scopes and red dot options out there so finding the right optic shouldn’t be too much of a problem. While it’s possible to use these with a traditional rifle scope, shooters will run the risk of eye bite if they don’t control the recoil.

It has more than a little in common with the full-size 700 PCR. (Photo: Remington)

Of course, with a full stock recoil won’t be an issue at all, which is why some shooters buy pistols then convert them to NFA-regulated short-barreled rifles. Buy the pistol today, file the paperwork and go shooting. Down the line when everything’s approved, install a stock and hit the field.

Remington is keeping prices competitive with the 700 CP. With a suggested retail price of $1,020, real-world prices will be well under $1,000.

Whether you’re looking to bag game ahead of the rest or just make great big fireballs at the range, you might want to keep an eye out for the upcoming Model 700 CP.