Remington is following on the huge success that is the TAC-14 with a semi-auto V3 TAC-13 12-gauge firearm. The compact package weighs just under 6 pounds with a 5-round capacity.

While the NFA, or National Firearms Act, has regulations controlling the sale of short-barreled shotguns, this is legally classified as a non-restricted “firearm” thanks to its bird’s head grip.

It has an overall length of 26.5 inches, a black synthetic grip and forend, and matching black oxide finish on the barrel and receiver. The barrel is 13 inches long with a cylinder bore. Remington doesn’t list the chamber but if it’s like the other V3 shotguns it will chamber up to 3-inch shells.

Other features include two removable Picatinny rail sections at the muzzle for accessories like lights and laser sights as well as a hand strap on the forend for extra control. It has a simple raised, ventilated rib and bead front sight.

Because it’s semi-automatic felt recoil will be lessened. Like full-size V3 shotguns it uses Remington’s self-regulating VersaPort gas system which is built to cycle light field loads and heavy loads including buckshot and slugs without adjustment.

It’s hard not to want a 5-shot semi-auto shotgun, no matter what you plan to use it for. (Photo: Remington)

The V3 TAC-13 has a $915 MSRP which is in-line with the other V3 shotguns. The difference is that the TAC-13 can pretty much go anywhere.

Remington is also launching their Premier Expander 12- and 20-gauge all-copper slugs for shotgun hunting. These shells are loaded with Barnes expanding hollow point slugs and use sabots for improved accuracy. 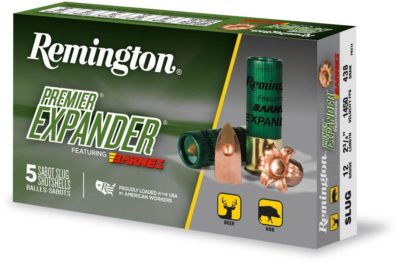 All in all some cool new stuff from Big Green!

Next post: The Story Of An Ambush & The British Sten Gun – A Spectacularly Successful Failure

Previous post: Emma Gonzalez of March For Our Lives: ‘We don’t want to take guns away, We’re pro-2A’