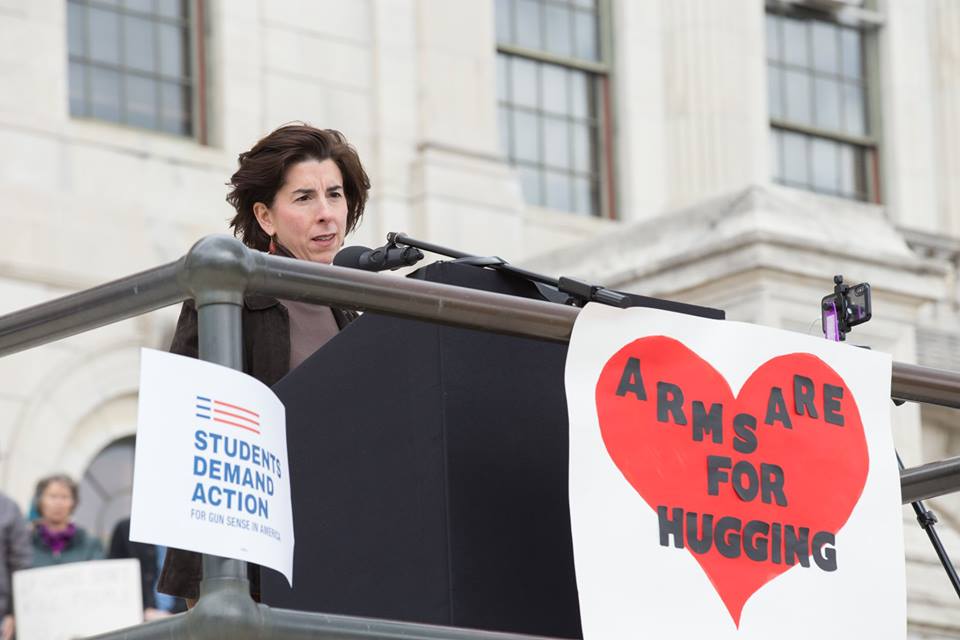 Gov. Gina Raimondo has renewed her efforts to increase gun control in Rhode Island.  At a news conference at the State House, scheduled on the one-year anniversary of the Parkland, Florida attack, Raimondo announced her plans.

“Parkland, Las Vegas, Tree of Life, Sutherland Springs, San Bernardino, Sandy Hook,” Raimondo said, listing the locations of recent shootings.  “The list goes on and on.  In every single one of those instances that I just listed, lives were taken because of use of an assault weapon.”

The school grounds ban would prohibit carrying any weapon on school grounds, within 300 feet of a school building or on school-provided transportation.  The penalty for violating the law would be at least one year, and up to five years in prison and a $5,000 fine for an adult.  A juvenile offender would also lose his driving privileges for up to six months.  The bill makes exceptions for law enforcement officers or other contracted security officers at the school, and for unloaded guns in a locked container in a car.

“You don’t want guns in proximity to kids in schools, period,” Raimondo said.

The ban on “assault weapons” does not ban specific models and instead defines an assault weapon by its features.  The bill would allow current black rifle owners to be grandfathered in, but only if they register their firearms with the state police within a year, pay a $25 registration fee, and submit to a “fingerprint supported criminal background check.”

The ban on “high-capacity” magazines will seek to prohibit any device that can hold more than 10 rounds of ammunition.  Those who own prohibited magazines would be required to surrender, modify or sell them within 180 days of the bill becoming law.

“If making magazines smaller so that someone has to reload before they can fire again, and we buy one second, two seconds or three seconds, and a first responder can take that criminal out or the person can get away, that’s worth it to me,” Rhode Island Attorney General Peter Neronha said.

The bills are based in part on recommendations from the Rhode Island Working Group for Gun Safety.  The Group was convened by Gov. Raimondo and issued its Final Report and Recommendations on October 4, 2018.

“Our children go to school every day with no protection, and Gina Raimondo’s plan does nothing to enhance it, in fact our opinion is that it makes it worse,” Saccoccio told local news affiliate WPRI.

Bills similar to the three proposed by Raimondo have been introduced in past legislative sessions and died in committee.