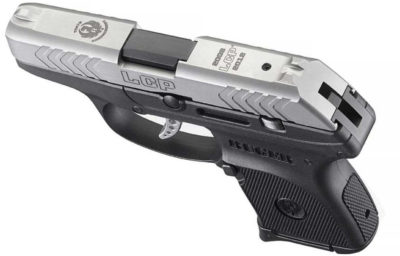 The embellishments are modest. This is still an everyday carry pistol. (Photo: Ruger)

It’s been ten years since Ruger first announced the LCP, one of the most popular concealed-carry pistols today. Since 2008 Ruger has followed up on the design with many enhanced models and special editions but the original is still around and doing well.

To celebrate Ruger is announcing a special Limited Edition 10th Anniversary LCP. This two-tone pocket pistol has all the standard features of the LCP with a few cosmetic changes.

Instead of straight slide serrations, it has forward-facing echelon cuts, with additional slide serrations at the front of the slide. The topstrap is laser-engraved with “2008-2018” along with the Ruger medallion.

The slide is stainless steel to contrast against the all-black frame, along with the skeletonized aluminum trigger. Otherwise, it’s exactly the same as a standard LCP.

Like the original model, the 10th Anniversary edition is chambered for .380 ACP with a 6+1-round capacity. It has a 2.75-inch barrel and measures just over 5 inches long by 3.5 inches tall. Unloaded it weighs just 9.6 ounces and the frame is barely .8 inches wide.

The frame is glass-filled nylon with a checkered grip for added control. Even though it’s chambered for .380 the LCP can be a little on the wild side due to its small size and weight.

The sights are integral, milled into the slide. They’re very low-profile and won’t snag on the draw. Each gun comes with one 6-round magazine and one finger grip floorplate extension.

While that might not seem like a lot of extras for a special edition, Ruger isn’t pricing this like one, either. The 10th Anniversary LCP has a suggested retail price of $299. Even at full price that’s a bargain.

Chambered for .450 Bushmaster this AR is capable of taking almost any game. (Photo: Ruger)

Of course it wouldn’t be Ruger if there was only one new product. The company is also announcing an AR-556-series MPR rifle chambered for .450 Bushmaster. The ‘thumper’ cartridge was developed to take large game and still fit in an AR-15-size magazine.

To ensure a long life, Ruger selected a superalloy for the bolt that they say is 50 percent stronger than MIL-SPEC components. They also tapered the lugs for increased shear resistance and overall reliability.

The cartridge is effective out to 250 yards and the new MPR will get it there with its 18-inch, 5R-rifled barrel. The barrel comes with a compensator and is threaded for 11/16-24 muzzle devices. It has an M-Lok-compatible free-floating handguard and Magpul MOE grip and MOE-SL stock.

It comes standard with a 5-round magazine and Ruger Elite two-stage, 4.5-pound trigger.

Once again, Ruger is determined to make a gun for every market, no matter how big or small.