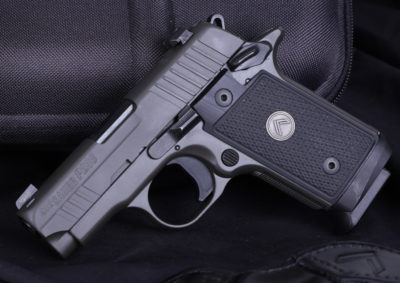 SIG Sauer is expanding their flagship series with the new P238 Legion and P938 Legion micro-compacts. These premium pistols are designed for all day, everyday carry, with a hard-use finish and added features.

The P238 Legion is chambered for .380 ACP and the P938 is stepped up for 9mm Luger. Both are single-action pistols with ambidextrous thumb safeties.

The premium micro-compacts have Cerakote Elite finishes in Legion Grey and come with XRay3 day and night sights. The front sight has a high-visibility green dot with a tritium lamp while the rear sight is serrated black with two lamps for nighttime use.

The slides have front and rear cocking serrations and are dehorned for a smooth draw and ease of holstering. The frame also gets the SIG Anti-Snag treatment. 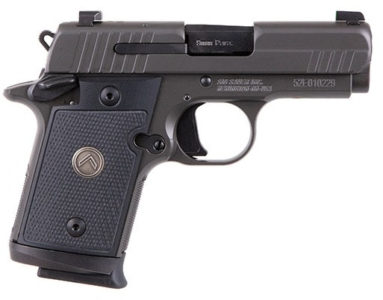 Available in .380 and 9mm, these micro-compacts weigh about 1 pound dry. (Photo: SIG)

The frames also sport a Cerakote finish and are checkered on the frontstrap, backstrap and trigger guard. They also have checkered G10 grips with bronze Legion medallions. Both have extended, flared magwells and come with three extended magazines. In .380 and 9mm they have a 7+1 capacity.

Another improvement is to the triggers. The guns have redesigned, machined flat triggers that set them apart from standard models, which have polymer triggers.

Despite the low mass many shooters find them easy to control making the P238 and P938 popular with single-action shooters. It was only a matter of time before SIG launched Legion versions of both models.

These are some of the most affordable Legion pistols, too. The .380 has a suggested price of $850 and the 9mm still under a grand at $904. And of course real-world prices tend to be less than MSRP.

It’s not just extra features that make the Legion series stand apart. Legion owners are entitled to exclusive premium gear and equipment, including accessories like holsters, ear pro and lights and Legion apparel. Anyone who registers their Legion products with SIG will receive a custom Thermold carry case and matching challenge coin.