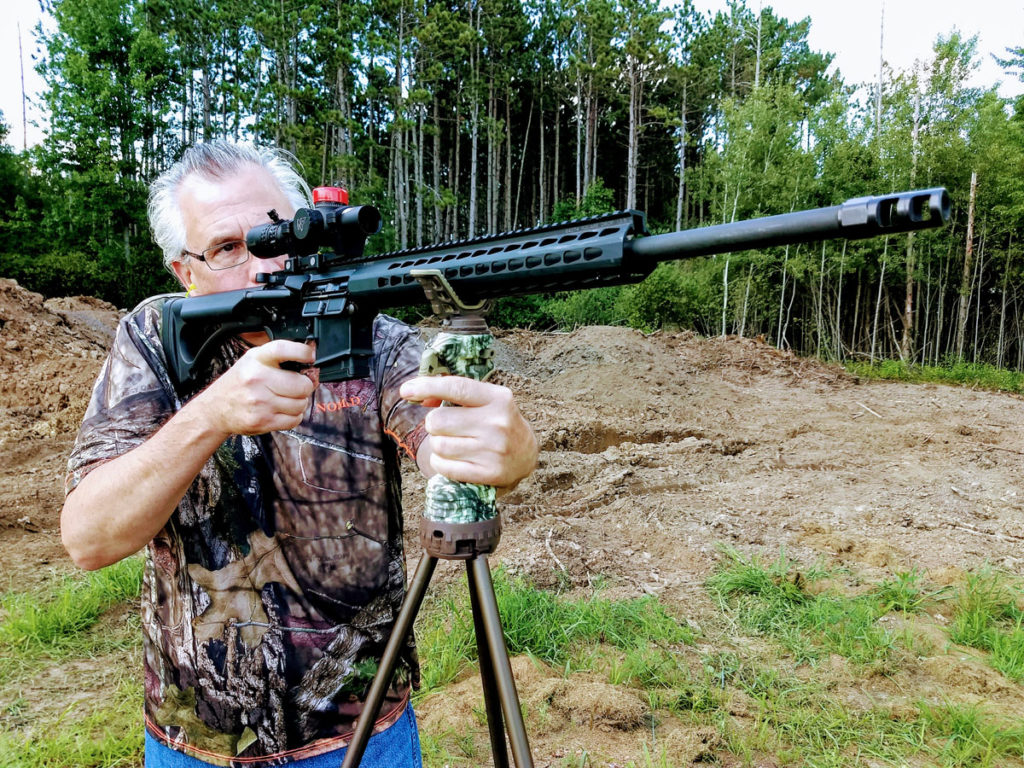 I have a certain bias. Whenever I see a celebrity from a television hunting program endorsing a product, I pretty much assume the product is mediocre. At best.

In my experience, celebrity endorsements too frequently follow the Great American Tradition of companies spending their money on marketing, rather than investing the time and cash it takes to make the product first-rate. They have the right to spend the money this way—it is their cash, after all. I also understand it can cost much less to toss some money at a celeb than to truly invest in the product itself.

But I do tend to view the endorsement of said products with a jaundiced eye.

So, when I saw that Mr. TV Hunting himself, Jim Shockey, had his name and likeness on Primos’ new Gen3 trigger Sticks? The Gen3 Jim Shockey Tall Tripod, no less?

I figured it’d probably break the second time out. I was wrong. 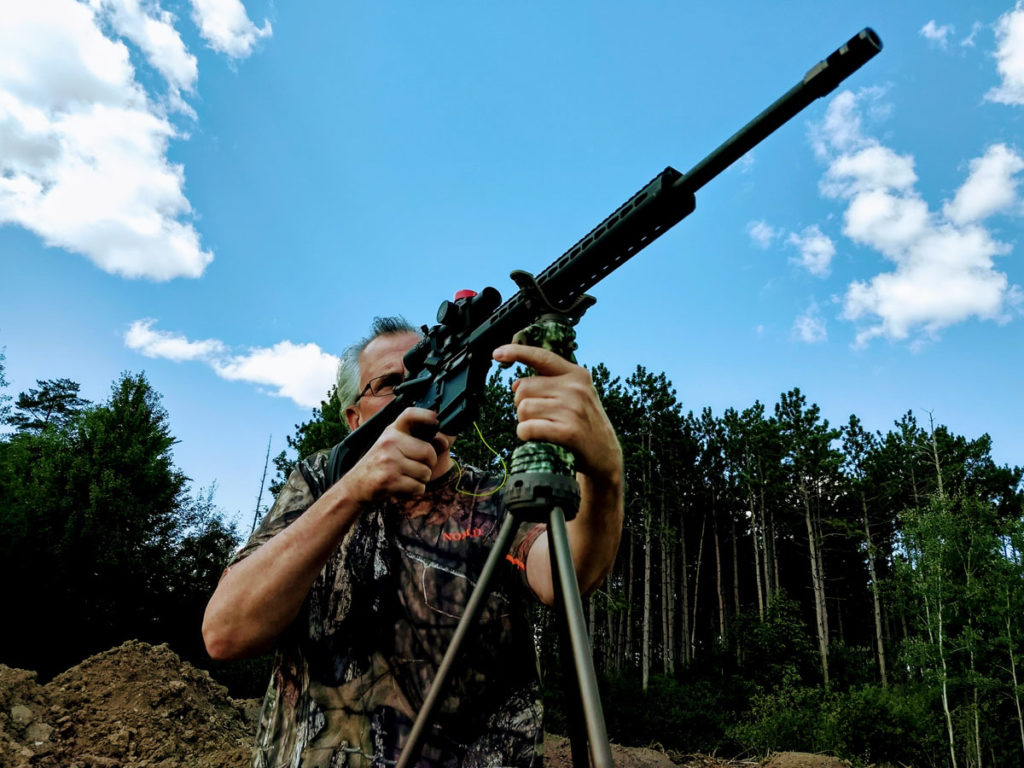 African Safari stick height but with the ability to adjust up or down with a press of the Primos Trigger. 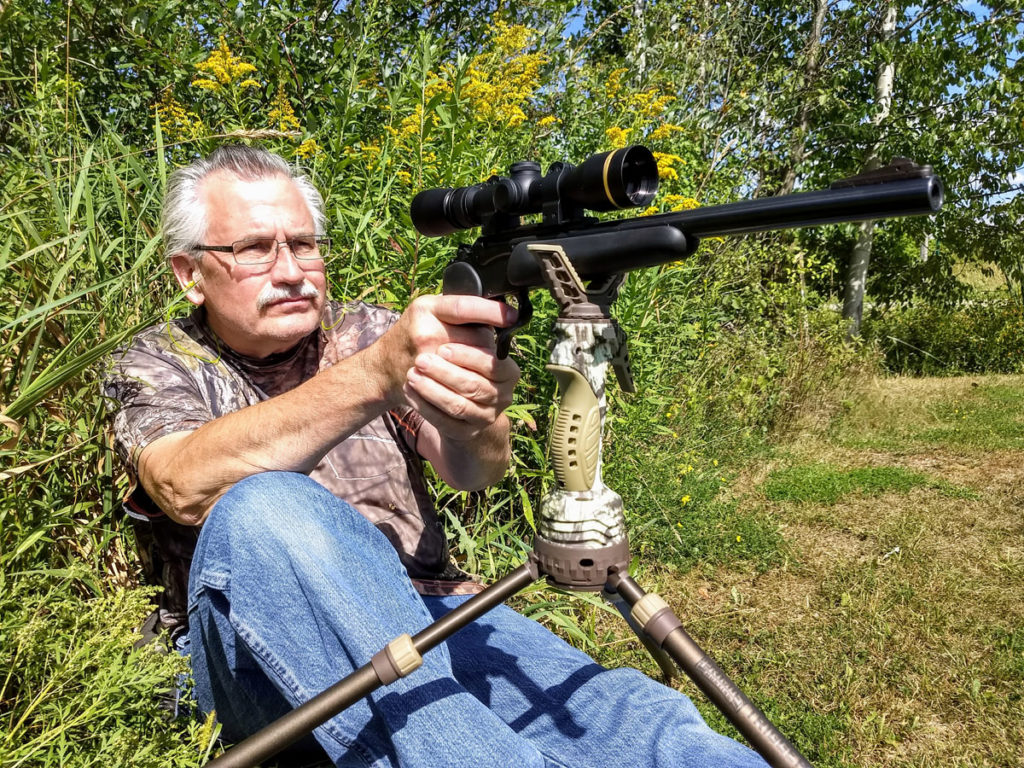 I’ve used the sticks on two hunts now, and during several range sessions, and the sticks have served me very well. At 62-inches tall when fully extended, the Jim Shockey Tall Tripod is the Primos version of African wooden safari sticks, though with these sticks you can adjust the height with the squeeze of a finger or a thumb.

Of course, any good shooting stick is a help when you’re hunting, as shooting stability in the field is often tough to find. But the tripod design of these sticks, the swivel ability of the top section, and the ease of changing out height make the Shockey Tall Tripod a very useful tool for the hunter.

The sticks are built around the Primos Trigger, which lets you adjust the height with one hand. Just depress the trigger to the side of the rotating head, and the tension on the sticks is released, allowing the legs to be extended or retracted. The tripod design makes this very stable, too, and once you are in position, the legs can be locked into place.

Push down on a small lever below the saddle, and depress a small tab, and the V-saddle pops off. Pop in the camera/optics base which is included with the sticks, and you can mount a camera or optic atop the Shockey Tall Tripod. Western hunters who spend a good deal of time glassing will find these sticks a real aid. 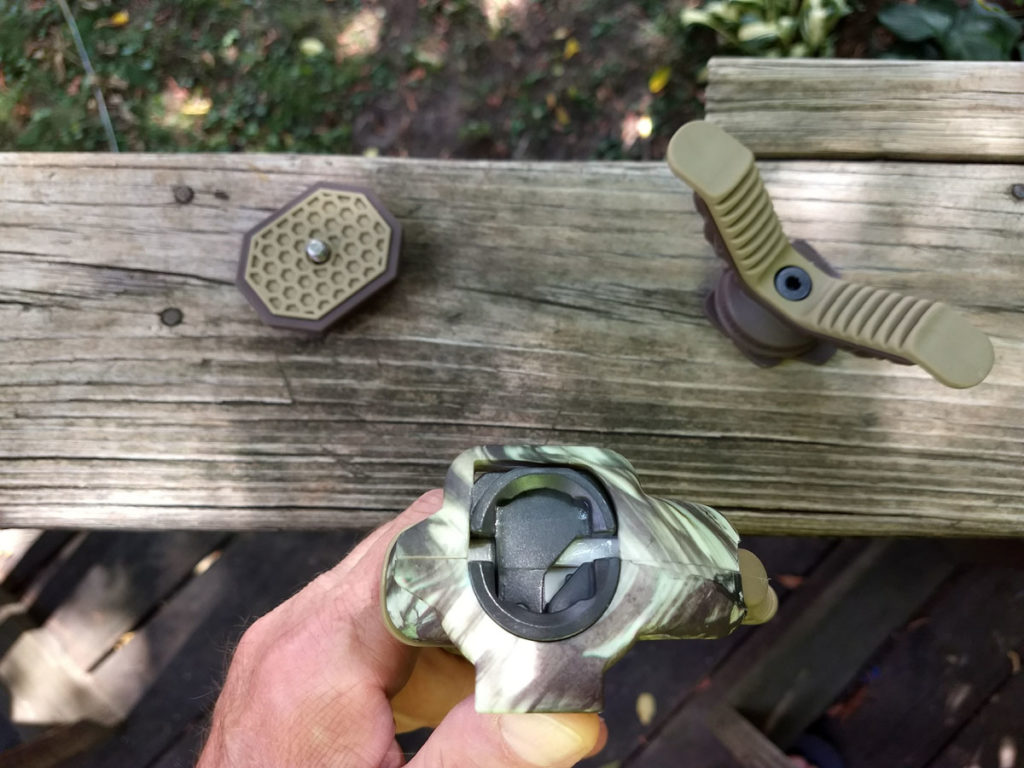 The Jim Shockey Tall Tripod can use either the traditional saddle mount (upper right) to secure your firearm or the camera/optics base (upper left). Both easily pop in and out of the top of the unit.

I’ve used the sticks to take an Axis buck in Texas and three Lone Star hogs. For the Axis, I made a 220-yard shot by setting the Jim Shockey Tall Tripod next to a mesquite tree and leaning my shoulder and arm into the tree trunk for additional support. 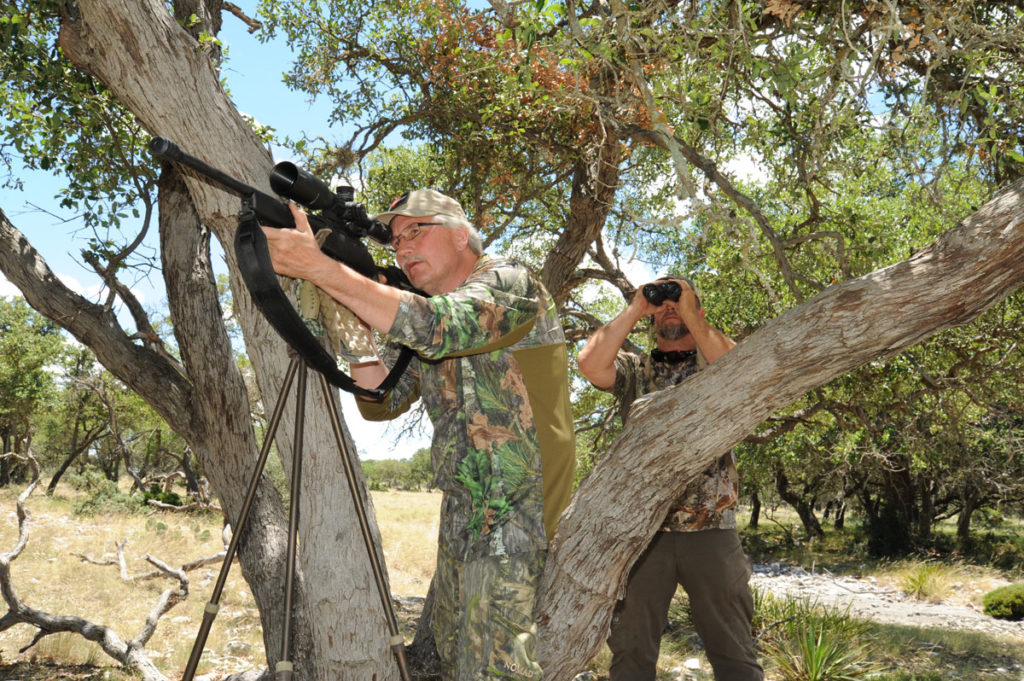 The Jim Shockey Tall Tripod will provide a solid shooting base whether you are standing, sitting or are anywhere in between.

The hog kills had me using the sticks both in a hunting blind (with me sitting in a chair) and out in the open. In all cases, the sticks adjusted quickly and easily, and the rotating head allowed me to shift my point of aim without resetting the whole apparatus.

Now, my time with the sticks doesn’t count as extensive testing. But they’ve worked well so far, and I will be using them through my fall hunts. If issues arise, I will update this review; if they keep doing the job, I’ll add that information, too.

The Jim Shockey Tall Tripod sticks aren’t light. They can be a handful when walking with them especially if you have a rifle on your shoulder or in the other hand. And they are not cheap. The suggested retail is $193.45, though on a web search I found them selling for between $130 and $149, some with free shipping.

Your own hunting style will determine if these shooting sticks could be of value to you. But the Jim Shockey Tall Tripod has worked well for me.