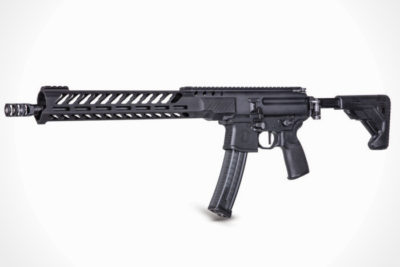 The MPX PCC is a thoroughbred race gun. (Photo: SIG)

SIG Sauer just announced a new, competition-ready pistol-caliber carbine, or PCC. Called the MPX PCC, the rifle is good to go out of the box for gun games, range time and self-defense.

“The enhanced MPX PCC offers a more robust set of features making it ready to go right out of the box at the same price point,” said SIG executive vice president Tom Taylor. “Our team of engineers has incorporated improvements into the MPX PCC that will benefit the end-user of this product, while reducing the overall weight of the rifle by a pound. At SIG we are always looking to combine value with the quality our consumers demand from us, and the enhanced MPX PCC is a great example of this.”

Starting at the front the rifle has a beefy 3-port muzzle brake. While recoil isn’t a big issue with pistol-caliber carbines, in a competition environment every little bit of compensation helps.

Likewise the rifle has a free-floating handguard to get the most in terms of accuracy. The full-length handguard is modular with M-Lok slots and an integral forward hand stop. It’s a minimalist design with a short 12-o’clock rail for a front iron sight.

Like other MPX guns the PCC has a large and easy to use magwell for fast reloads. All of the controls are ambidextrous. The carbine also has an adjustable 5-position folding stock.

Every MPX PCC comes with a Timney single-stage trigger. Standard capacity is 30 rounds in 9mm Luger and rifles come with one translucent polymer magazine.

“When it comes to my competition equipment I want a rifle that’s reliable, accurate, and easy to shoot, and the SIG MPX PCC checks all the boxes,” said Miculek. “With my MPX PCC I move easily between stages, and I have seen improved speed, greater accuracy, and really elevated my competition to the next level. The enhancements that SIG has incorporated into the MPX PCC will make a real difference to the professional shooter and be quickly realized in competition.”

The MPX PCC is based on the MPX gas-operating submachine gun. While it’s built for shooting matches, it is also a solid self-defense carbine.

There are advantages to 9mm carbines for protection. They’re more affordable to practice and train with and muzzle blast is much less when shooting indoors. And 9mm gets a significant boost from the longer barrel.

Price may be a factor for some as the MPX PCC has a suggested retail price of $2,016. Current real-world prices for MPX carbines start around $1,700.  For more information visit SIGSauer.com.

Previous post: Russian Dissident Calls for Armed Citizenry to Defend Against ‘Own Government’