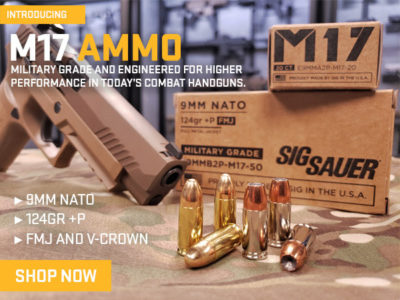 The ball ammo and hollow points are matched so you can train with one and fight with the other. (Photo: SIG)

SIG Sauer is announcing a new brand of 9mm Luger ammunition, the M17. Named after the military’s newest sidearm, M17 ammo is designed to military specifications in both ball and hollow point loads.

“The commercial release of the civilian variant of the U.S. Army’s M17 pistol, the P320-M17, has been a tremendous success,” said SIG Ammunition senior director Brad Criner. “We are excited to have the opportunity to offer the M17 9mm +P to our customers who want to shoot an ammunition that combines high-quality SIG performance with a military-grade +P ammunition.

“The M17 V-Crown and FMJ loads are both ballistically-matched, making it easy for our customers to train with the ammunition they carry.”

When the U.S. military started trials to find a replacement for their mix of M9 pistols and other handguns, they asked manufacturers to provide ammunition as well. While some of the competitors teamed up with outside ammunition manufacturers, SIG turned to their newly-created in-house ammo company to make their own ammo. 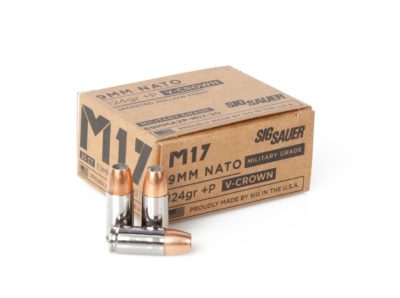 This ammo matches the loads used to run M17 and M18 pistols in the field. The over-pressure loads have the same bullet weights and velocities so that shooters can practice with the less expensive ball ammunition and carry hollow point loads for self-defense.

Both are loaded with 124-grain bullets traveling at 1198 feet per second. That works out to 395 foot-pounds of energy at the muzzle.

The ball ammo is loaded with a full metal jacket projectile and has a standard brass case. The hollow point is topped with a V-Crown bullet and has a nickel-plated case. Nickel plating helps prevent corrosion and improves feeding and ejection, especially in adverse conditions. 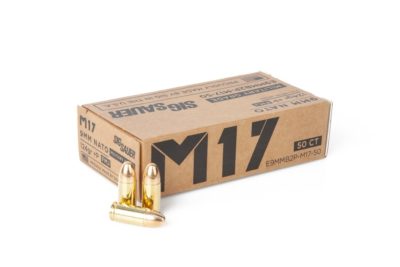 Pricing for the V-Crown load is $18 for a box of 20 rounds which is competitive. The ball ammo is above average at $20 for a box of 50, but considering it’s ballistically matched to the hollow points it’s a whole lot cheaper for training with.

In addition to the M17 ammo, SIG recently released a batch of military-pattern P320-M17 pistols to the commercial market. These guns are identical to the standard M17 pistols currently being issued to all branches of the Armed Forces.

They are upgraded P320 pistols with a flat dark earth finish and an ambidextrous manual thumb safety. Many of the improvements from the Modern Handgun System M17 have since been retroactively applied to commercial P320s.

For more information make sure to visit SigSauer.com.