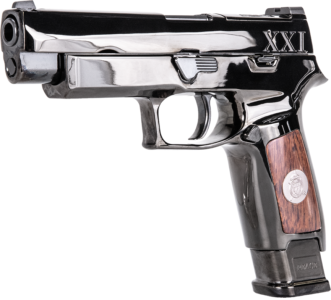 Four presentation models will go to the Sentinels. (Photo: SIG)

The four guns, Silence, Respect, Dignity and Perseverance, have alloy frames with wood grip inserts, a big departure from regular-issue M17s, which, along with the slides, are polished to a mirror finish. The wood is from the USS Olympia and the grips bear a Guard medallion.

The USS Olympia was the ship that carried the unknown soldier buried at the Tomb of the Unknowns. The Tomb is dedicated to all military personnel who fall in service to the United States.

Another change is the safety. These pistols don’t have a manual thumb safety – which is fitting for some of the most disciplined soldiers in the world. 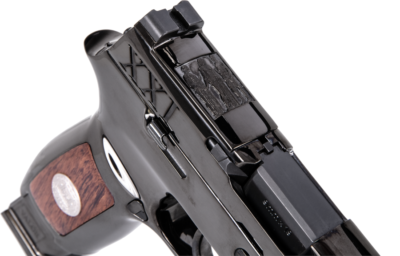 Instead of traditional slide serrations the guns have XXI cuts, for the 21 steps to cross the Tomb and the 21-gun salute. Also, each pistol has a 21-round magazine.

They have M17-style rear sight plates but the front sights have a glass insert made from the marble dust from the Tomb. The sight plates and magazines have Greek figures engraved into them representing Peace, Valor and Victory.

The pistols will be presented to the Sentinels Thursday, October 11 at a wreath-laying ceremony. Prior to the presentation Silence will be on display at this year’s Association of the United States Army Annual Meeting, October 8-10.

See Also: 6 Misconceptions about the Tomb of the Unknown Soldier Sentinels

The M17, formerly the SIG MHS pistol, is the military’s new main service pistol. After rigorous trials, the Army and Air Force selected the SIG design over its competition for its reliability, accuracy and low cost. The M17 and its compact variant, the M18, have since been adopted by every branch of the armed forces in some capacity. 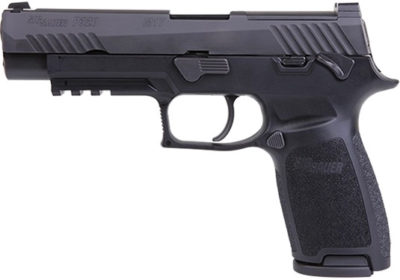 While few people will get a chance to see the Tomb of the Unknown M17s except from a distance, SIG is also releasing an M17-based P320 on the commercial market.

The P320 Bravo is based on the limited-edition commercial run of M17 pistols but with a black frame and black slide and barrel. Like the M17 pistols the Bravo has a manual thumb safety, rear sight plate and front tritium night sight.

The Bravo, like the M17, has a 4.7-inch barrel and full-length slide with a Carry-size grip module, with a 17+1 capacity with flush magazines. The Bravo comes with two flush magazines, though extended mags are readily available.

A Talo exclusive, the Bravo has a suggested retail price of $768, which is a bit less than the limited-edition M17s. Real-world prices, as always, will be a bit less.

Next post: Upgrading the Mossberg Patriot Predator with a Boyds Pro Varmint Stock