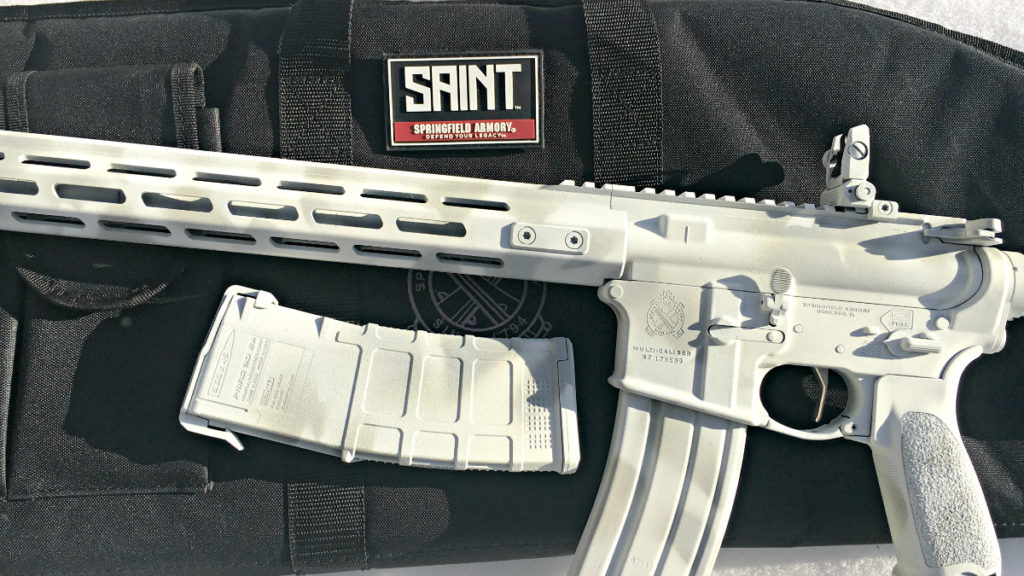 In a few simple steps your rifle will be ready for Arctic Warfare or just Winter Activities. In this case, a Springfield Saint AR-15 Rifle.

First off, why might we want to camouflage our rifle or any other gear?  For starters, just that, camouflage.  Perhaps we are in an environment where we want to blend in, be it hunting or even a tactical environment.  Past that, while maybe not applicable to the alpine camouflage pattern we’re about to do, is heat transfer.  If you’ve ever been somewhere hot and gone to pick up a black rifle that has been sitting in the sun, it is unpleasant at best.  You’d be surprised what a paint job will do.  You could probably make that case that it adds an additional level of protection to the weapon, think about it as a sacrificial coating.  And lastly, because it looks cool.  People do things every day because it looks cool.  There is no gate keeper, do your thing… 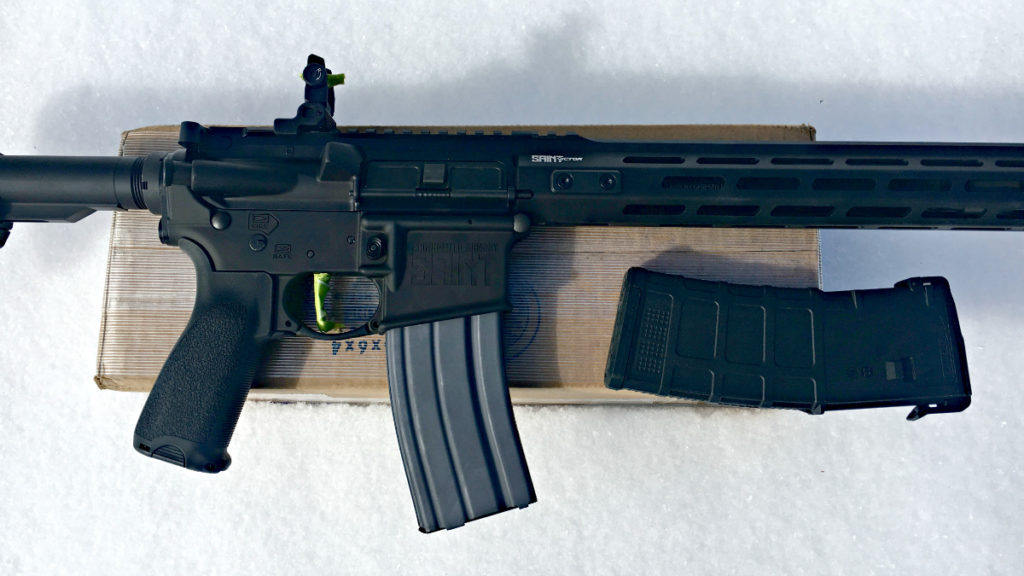 A number of years ago I read an article about painting your carbine by the late Pat Rogers, over on the Lightfighter forum.  In it he detailed how to go about doing a quick paint job to a rifle or gear that worked well, would hold up under use and was quick and easy.  From that article I’ve adapted the information to winter/snow camouflage.

For this project, you’ll need two cans of paint and something to create a pattern with.  And while technically you could use any flat/matte paint, I would recommend Aervoe.  Aervoe paint is the flattest in my experience and holds up really well compared to other spray paints.  There are a number of places you can find it, to include DSG Arms.  Additionally, Aervoe has a huge selection of “camouflage” colors.  The paint I’ve chosen to use is the White (#975) and Urban Grey (#1083). 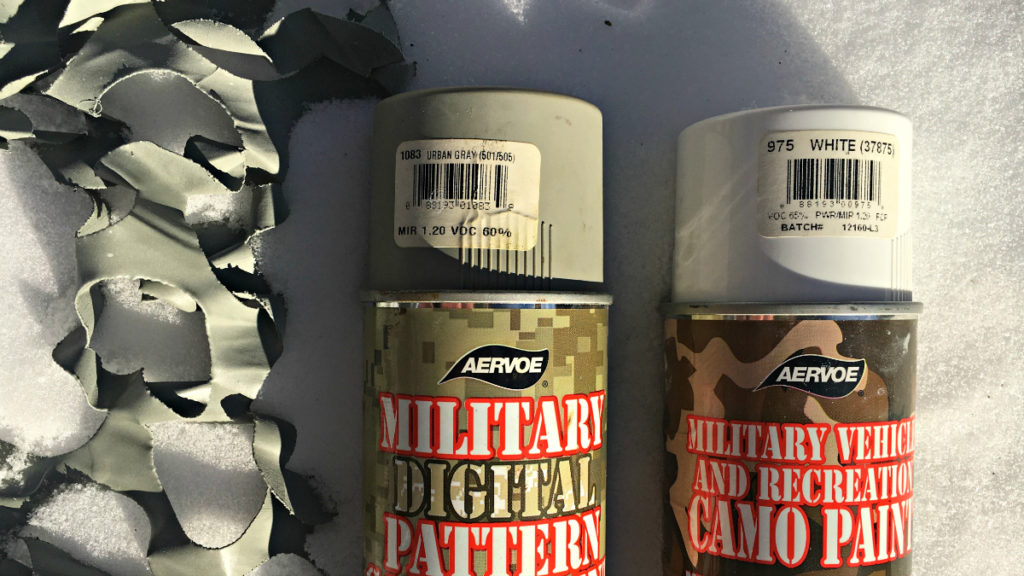 Most any paint will work, but I’ve had the best results with Aervoe.

If for whatever reason you can’t find these paints, I would recommend a flat white and grey.  Primer will probably work fine for you in this project, but will probably lack the same durability of the Aervoe.

Beyond the paint, we need something to create a pattern.  Technically you could randomly paint some sort of pattern or free hand design on your rifle, like stripes, but stencils are easy and can be found anywhere.  I like using a piece of camouflage netting.  You can just as easily use a section of net from a laundry bag, a limb with or without leaves or needles on it, pretty much anything.

You’re also going to need a rifle. The rifle used in this example is a Springfield Armory Saint Victor AR-15 and is a new for 2019 model. It features a slimmer free float handguard with M-Lok. Watch for a full review of the rifle in an upcoming issue of GunsAmerica.

Before we get started we need to prep our rifle.  *While it should go without saying, make sure your rifle is rendered safe and clear.*  To prep our rifle we want to expose all the parts we want to be painted, such as the buffer tube, and under moving parts like iron sights.  Simply extend the stock to its full length and flip your sights up.

There are a lot of places we don’t want paint, which need to be covered up or masked off.  For starters, close your ejection port.  Next, to keep paint out of the barrel, simply put a foam ear plug in the muzzle or mask it off with tape. 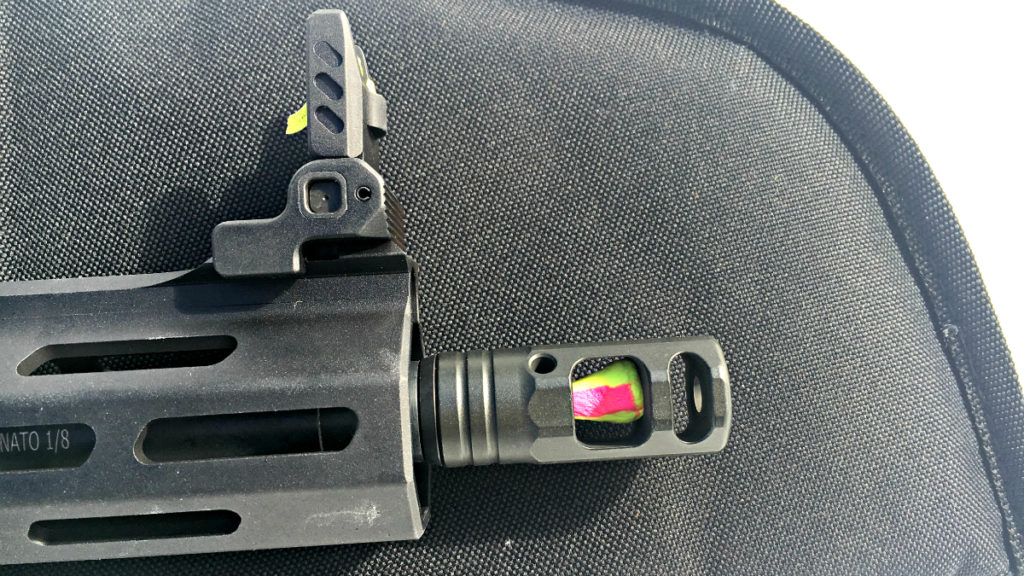 Foam ear plugs work great to keep paint out of your barrel.

Another important place we want to keep paint out of is the magazine well.  If you paint the inside of the magazine well, you can run into issues with tolerance stacking.  This can lead to magazines getting stuck and not dropping free.  The easiest option is to place a empty magazine into the rifle.  This will keep the paint out and give you a painted magazine at the end of it.

While most “mil-spec” triggers you probably couldn’t tell the difference if they were painted or not, this isn’t the best practice.  Nicer triggers will suffer from paint moving up into the lower receiver.  To alleviate this, simply mask off the trigger and seal the tape along the bottom of the lower receiver where it opens around the trigger.

Next, and this is super important if you don’t want to have to come back later with acetone, we need to mask off our iron sights.  If you are running fixed, or folding iron sights, tape off the front sight post and the rear aperture. 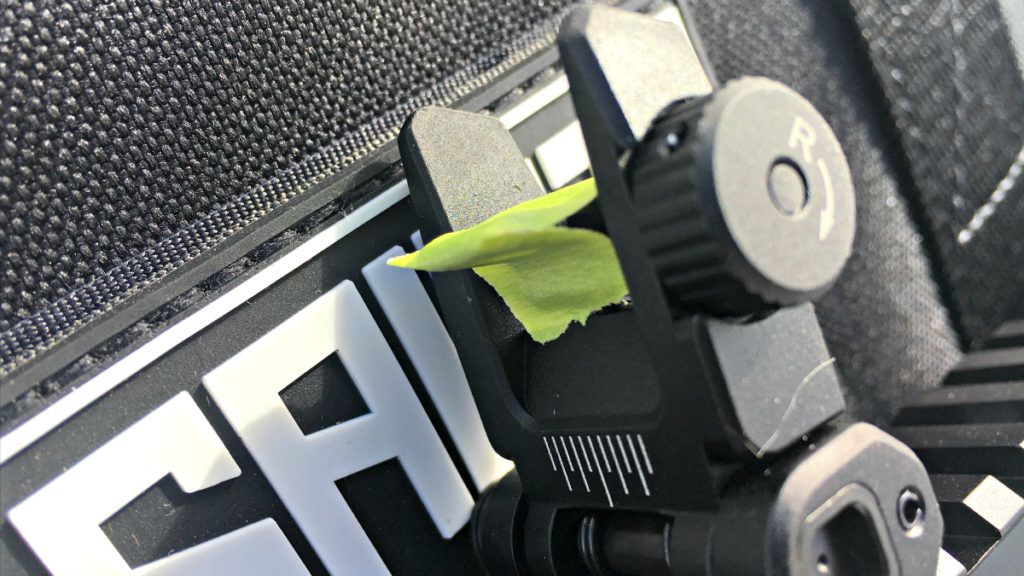 Only the front sight post and rear aperture needs to be masked off. Other markings will still be visible even when the rifle is painted.

What about the little part below the rear aperture with the vertical markings?  It doesn’t matter.  Those lines are there for establishing a mechanical zero before actually zeroing your rifle.  And unless you are drenching your rifle in paint, they will still be visible after painting.

What about paint in between the upper and lower receiver or the trigger pins?  Don’t go down the rabbit hole…  At the end of the day your rifle is controlling explosions which cycles the rifle.  That explosion is plenty strong enough to break anything free that you somehow managed to “paint closed”.  And the subsequent shots will rapidly remove any high spots where the paint is.  All that being said, lets not celebrate it.  Mask off what makes sense. 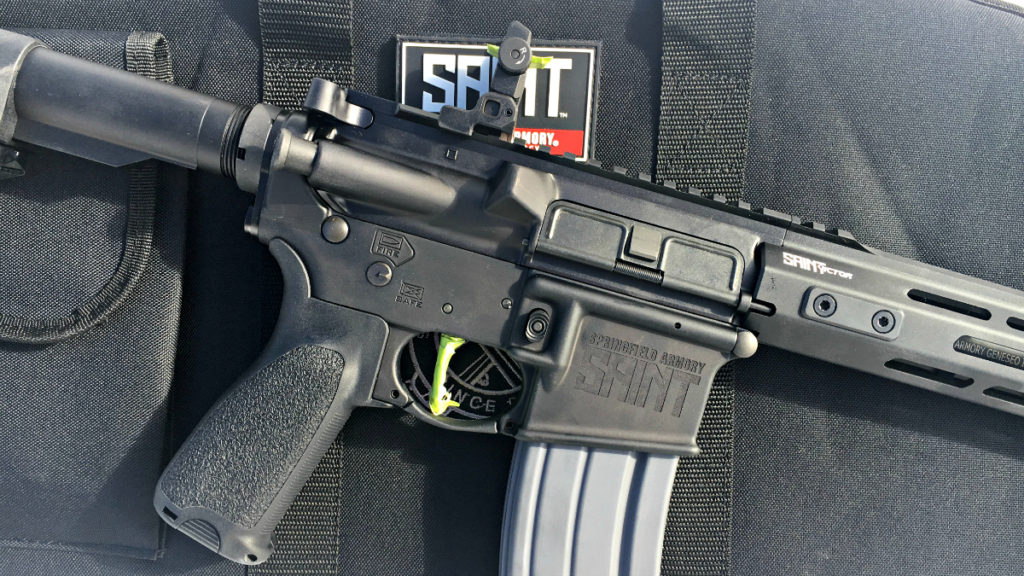 I usually mask off the trigger and where it drops down from the lower receiver.

At this point, we’ve masked off the important bits of our rifle.  This leads us to the question of accessories.  What about my weapon light?  Maybe a forward vertical grip or hand stop?  Dealers choice.  You can either paint them on your rifle, knowing that if you remove them you will have black spots where they once were, or you can paint them all individually and then assemble your rifle.  Your call.

Now that we are ready to paint, where do we want to paint?  Ideally somewhere relatively warm with low humidity and no wind.  A garage, free of vehicles or other things that can be damaged by over-spray, being ideal.

Technically you can hang the rifle by the muzzle device and pretty much paint it all in one go.  I find this to create tons of overspray and is best suited to outdoors in fair weather.

I usually paint my weapons and gear one side at a time, laid out on cardboard.  Arrange your rifle and accessories so that you can move around them from most angles.  We are now ready to paint.

To start, we want to paint everything white.  This is done by making even passes with the spray can about a foot away from the rifle.  Think about layering up a misting of paint rather than trying to get it in one pass, potentially leading to drips.  Be sure to to hit it from all angles as well. 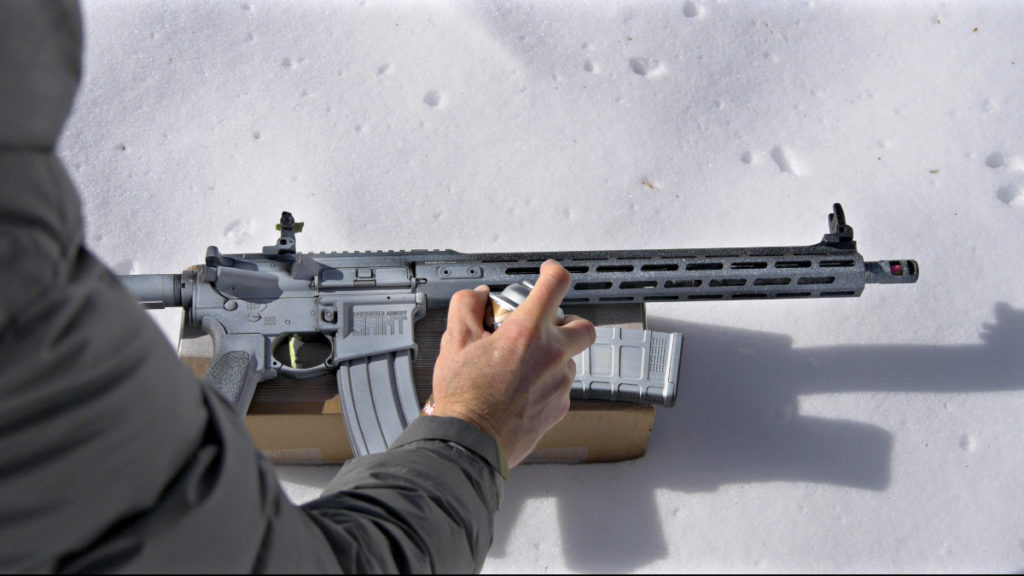 Numerous light coats is going to be better than 1 heavy coat.

Once our rifle and accessories are white, we need to wait until the paint dries to the touch.  This typically takes between 5 and 10 minutes depending on humidity.

We can now move on to patterning.  As I mentioned before, I prefer a small piece of camo netting.  Simply drape the netting or pattern material over a section of your rifle and spray the Urban Grey across across it.  Then move on to the next area until you have blotches of Urban Grey across the rifle, be sure to get all angles. 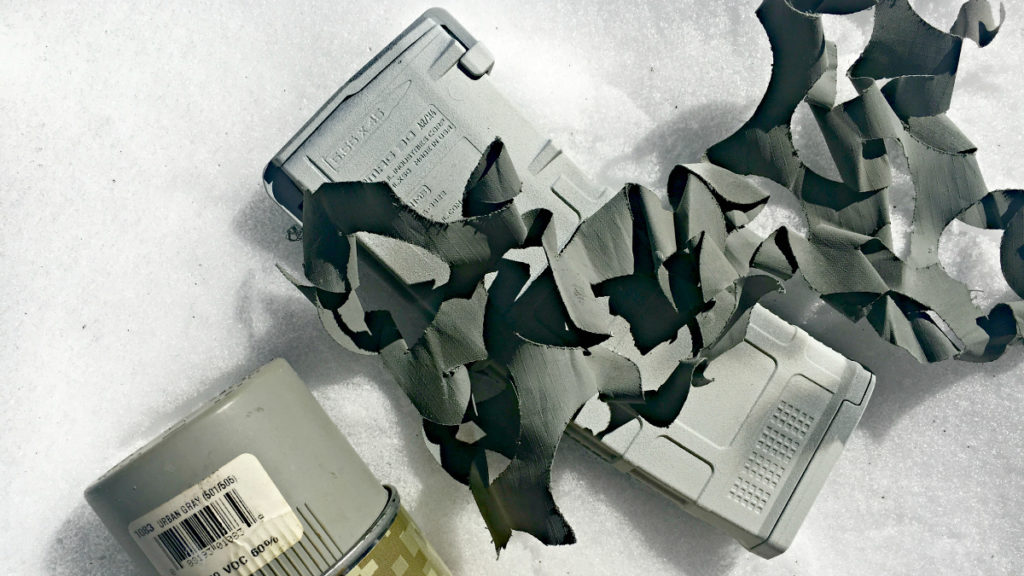 Laying camo netting or any other stencil across the rifle and gear will give you random contrasting shapes.

You will now have a white rifle with grey shapes across it.  Because of the way the net lays, there will be hard lines between the grey and white, this is fine.  We’re about to remedy this. 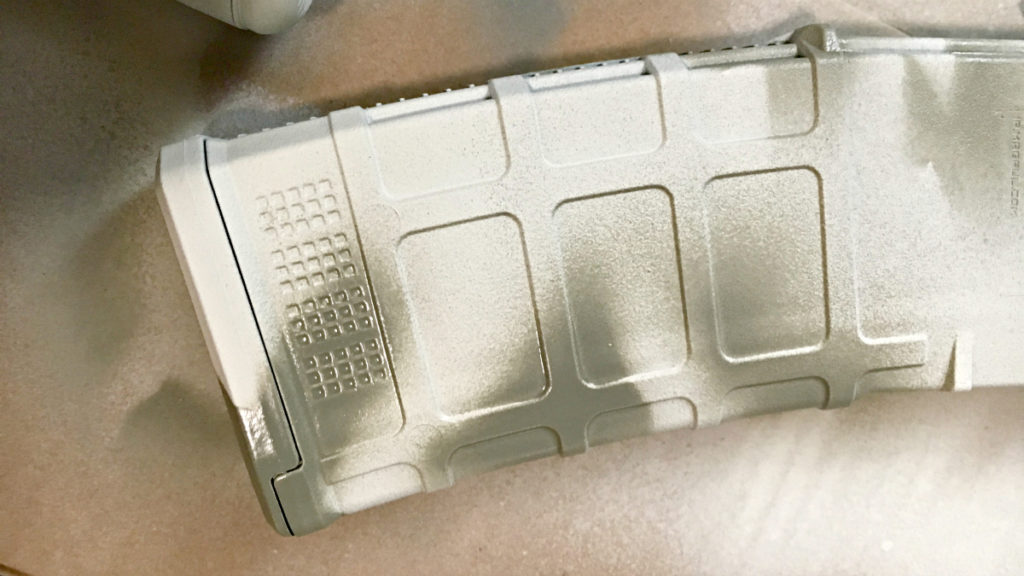 Because of the way the stencil lays, you will probably end up with hard lines between colors.

The final step is to dust the whole rifle.  Taking the white paint we originally started with, from about a foot or so away, lightly dust the entire rifle.  This will soften any hard lines and go far in creating a very subtle camouflage pattern on your rifle and associate gear you’ve been painting. 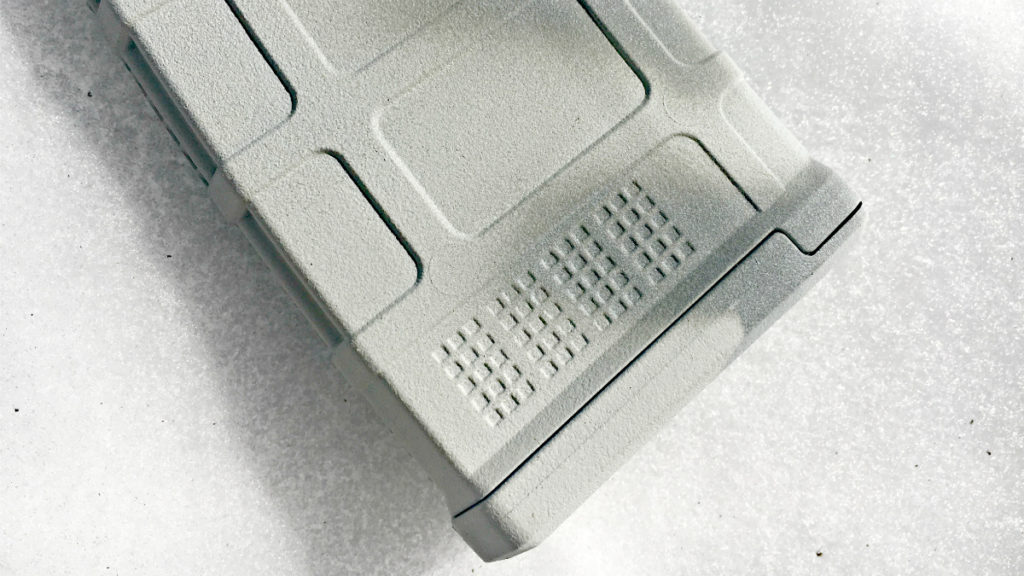 A light dusting with the original White paint will soften everything and lend to the camouflage.

Since this has been accomplished one side at a time, wait a good 10 to 20 minutes until that side is dry to the touch, turn the rifle over, and repeat the same steps on the opposite side.

While this all may sound complicated, it isn’t.  It is actually really simple.  Having said that, I’m sure there are still people out there with questions. 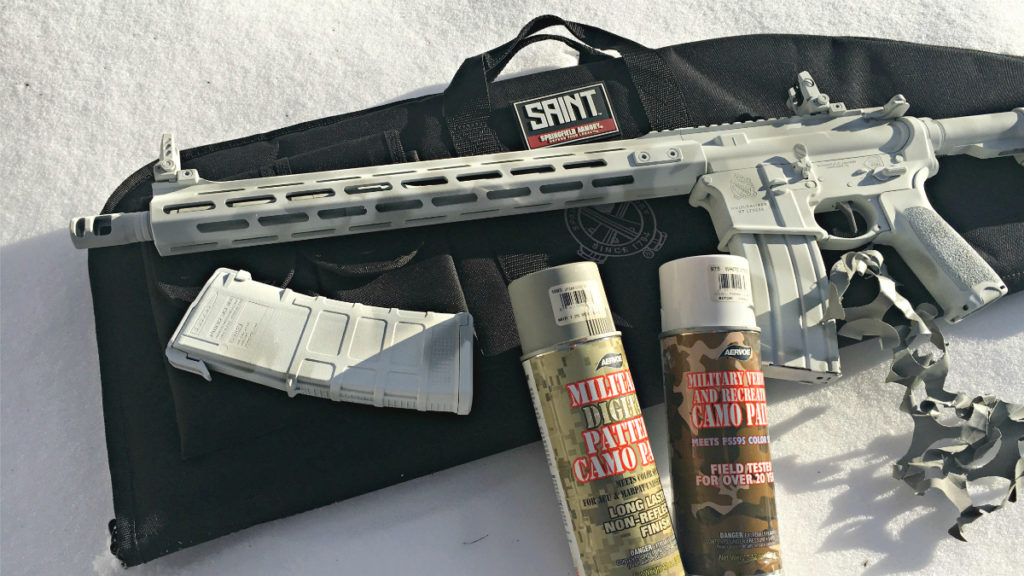 Two cans of paint, a stencil, some patience and less than an hours work.

Like, what about degreasing my rifle first?  If lubricant is dripping off of the outside of your rifle, wipe it off.  If you’re super OCD, wipe it down with alcohol or some other degreaser.  It really won’t matter much, anodizing is plenty porous for paint to grab onto.

Don’t overthink it.  It is next to impossible to mess up.  On top of that, you can always brake out the acetone and clean the slate if you don’t like it.  And if you are really concerned about it, borrow one of your kids Nerf guns to take for a trial run.

With 2 cans of paint, a little section of netting and less than an hour, you can come out with your rifle ready for Arctic Warfare…   …or just looking cool. 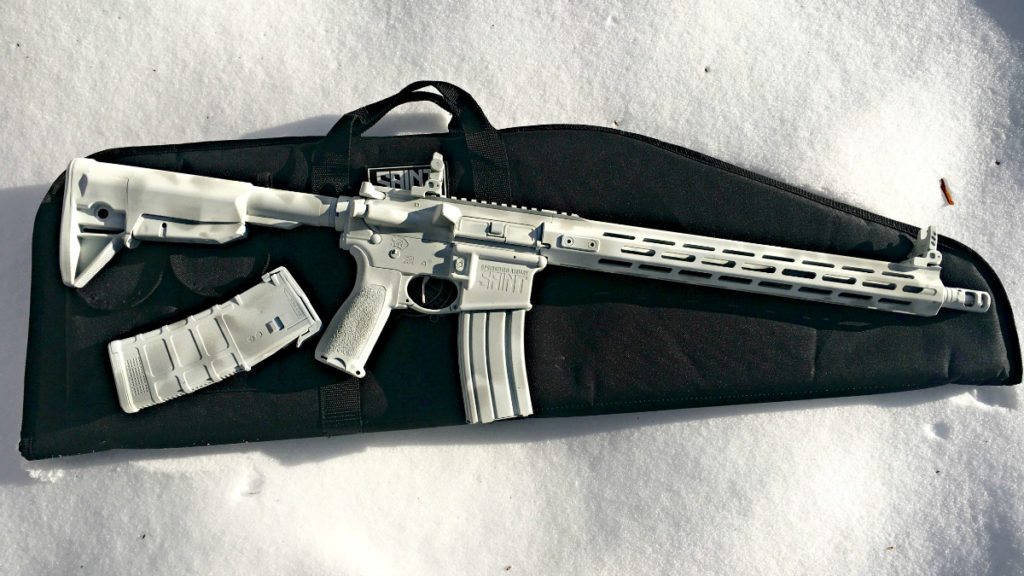