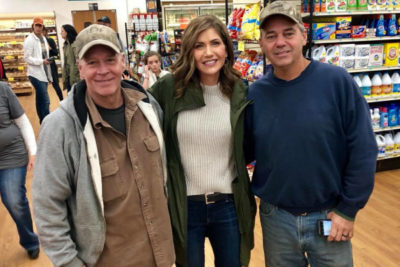 The South Dakota State Senate passed a bill yesterday on a 23-11 vote that would allow permit-less or “constitutional” carry of concealed firearms. With a new governor in Pierre, gun owners are hopeful the legislation will finally pass both houses and become law.

“Law-abiding citizens are currently the only people obtaining permits to carry concealed,” said Sen. Brock Greenfield. “If you’re not a law-abiding citizen, you cannot obtain that permit. Allowing these individuals to carry concealed without a permit will not change the fact that they’re law abiding. Criminals, on the other hand, are already carrying concealed firearms without permits, with no regard for our laws.”

Both residents and visitors to South Dakota would be allowed to carry a concealed handgun without a license, according to the bill (SB47). The Argus Leader reports that some legislators expressed a desire to limit the law’s application to state residents, and the House will have a chance to amend the policy once they begin to consider it.

Much of the debate has centered around whether constitutional rights like the right to keep and bear arms can or should be limited.

Opponents of the bill cited the late Justice Antonin Scalia’s observation that Second Amendment rights are not unlimited.

“We are creating an expectation of extraordinary absolute rights, and that is not healthy for a democracy,” said Sen. Susan Wismer. “I think our democracy would be doing much better if we encouraged our citizens … to exercise just a bit of restraint and responsibility rather than sell that entitled attitude, the ‘we demand our rights’ philosophy.’”

This isn’t the first time constitutional carry has seen success in the South Dakota legislature, but supporters are hopeful it will finally pass the governor’s desk this year. Former South Dakota Gov. Dennis Daugaard vetoed the legislation in 2012 and 2017, but new Republican Governor Kristi Noem expressed support for constitutional carry during her campaign in 2018.

While she didn’t support any particular language, her campaign said she supported the idea “in principle.”

“There are a lot of Republicans that are very excited to have a conservative governor,” former South Dakota Representative and current Senator Lynn DiSanto told the Associated Press. “I think under a new governor it’s very likely to pass.”

South Dakotans who wish to voice their support of the bill (SB47) to their state representatives can do so here.