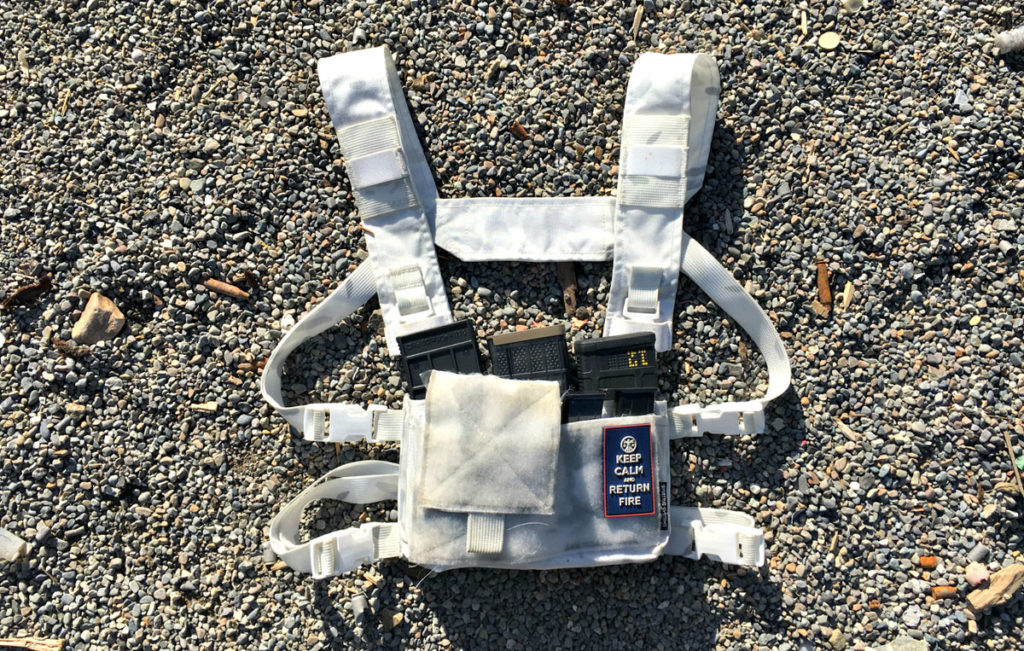 Chest rigs are nothing new. They’ve seen service through the years and wars, so much so that “Rhodesian” or “Rhodesian Harness” became synonymous with chest rigs. What they ultimately do for someone is move gear from either their back or waistline to their chest. Creating better access to the equipment they are carrying, usually rifle magazines.

My first experience with a chest rig was when I was issued one on my first deployment to the Middle East as a Security Contractor in early 2010. We had the option of wearing either horribly made plate-carriers with magazine pouches across the front or slick armor carriers with a Rhodesian over the top of it. After a going back and forth between those two setups over the next 90 days, I pretty much swore off chest rigs and stuck with plate carriers with attached pouches. 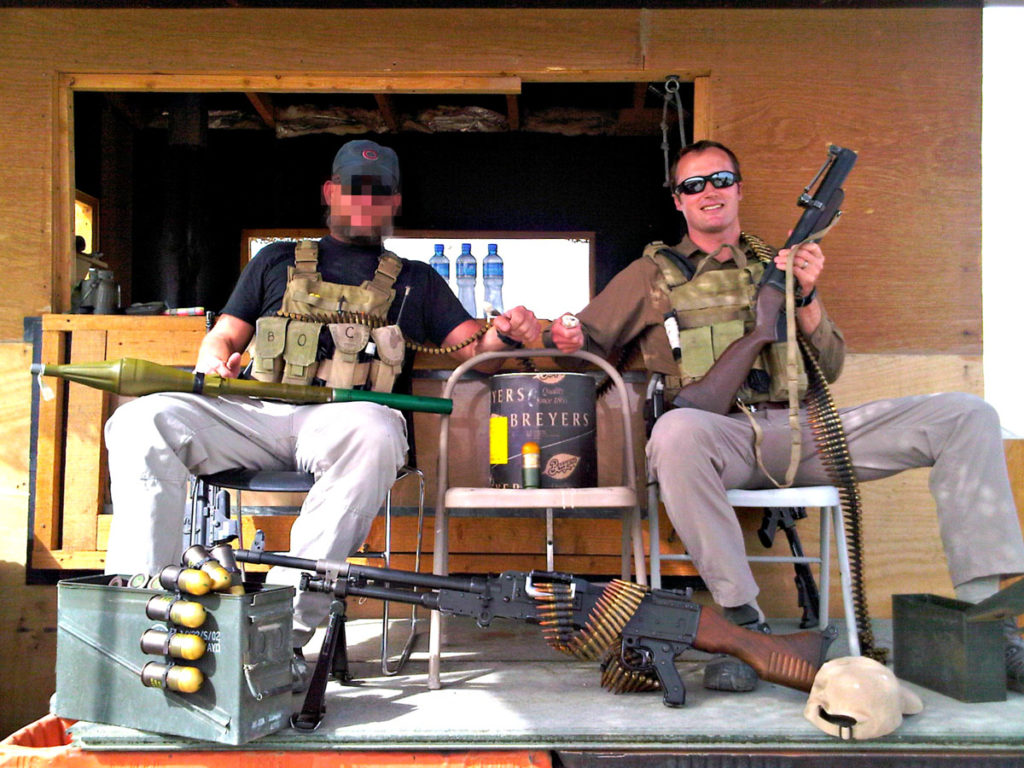 Even though the early plate carriers didn’t offer tons of modularity, they still offered more than the “fixed” chest rigs of the day.

I came to this decision on two fronts. First off, if I’m wearing armor anyway, what is the point of having a whole separate piece of gear to deal with putting on, taking off and trying to get adjusted? And secondly, the old Rhodesian I was using back in 2010 didn’t fit well and was set up one way. A row of four double M4 magazine pouches across the front. Not a lot of room for customization even compared to the very limited adjustment that I could move magazine pouches on my plate carrier.

Even though I didn’t purchase a chest rig for a number of years after, I kept occasionally looking at them. I watched them progress as the War on Terror dragged on, with a byproduct of the war being a large amount of R&D and innovation in the tactical market.

I’ve always liked the idea of a chest rig. Something that you could potentially put on and take off easily. Something that interfaces with body armor but does an equally good job as a stand-alone piece of gear. And something modular so that I can tailor it to my needs.

It took a while but the market finally caught up. There were a few noble attempts along that way, but it wasn’t until Spiritus Systems released their Micro Fight Chest Rig (MFCR) that I found what I was looking for. 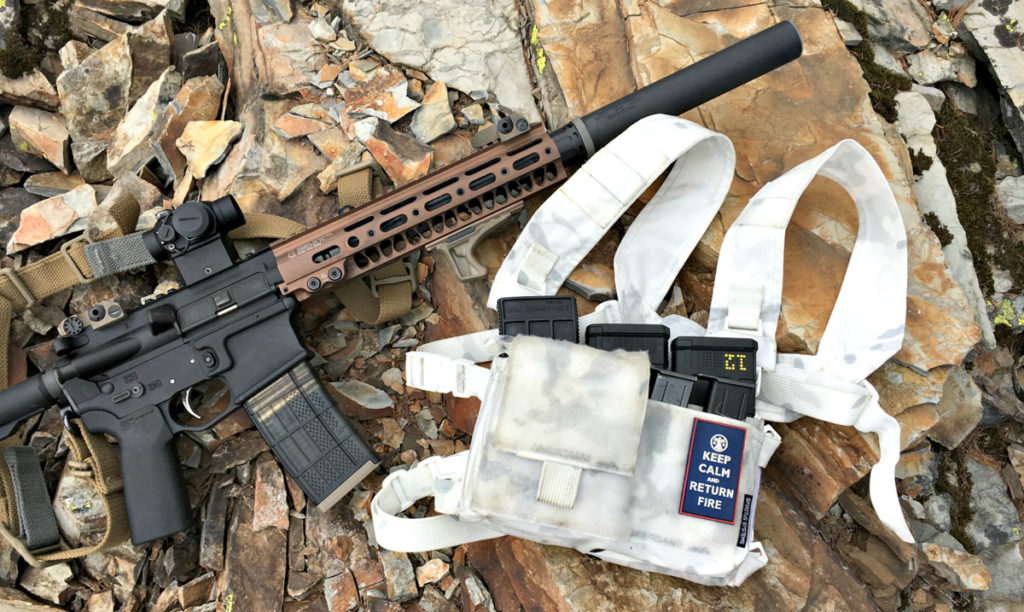 The Spiritus Systems Micro Fight Chest Rig pairs easily with most any modern rifle set up.

At the very heart of it, the Micro Fight Chest Rig is a two-compartment pouch, the Chassis Mk3. Around this chassis, the chest rig is created. And when I say created, I mean you, as the consumer, create your rig. The whole system is modular and sold a la carte. This allows you to essentially “build” the chest rig you are looking for and easily configure it to most any task or mission.

There are a few pieces you will be wanting. Namely the harness and back strap. The back strap is just that, a piece of webbing with ITW Fastex buckles that goes around your back, helping secure your rig. The other piece is the harness. The harness is offered as either a Fat Strap or Skinny Strap. One obviously being larger, wider and marginally heavier, while the other just utilizes 1” webbing. 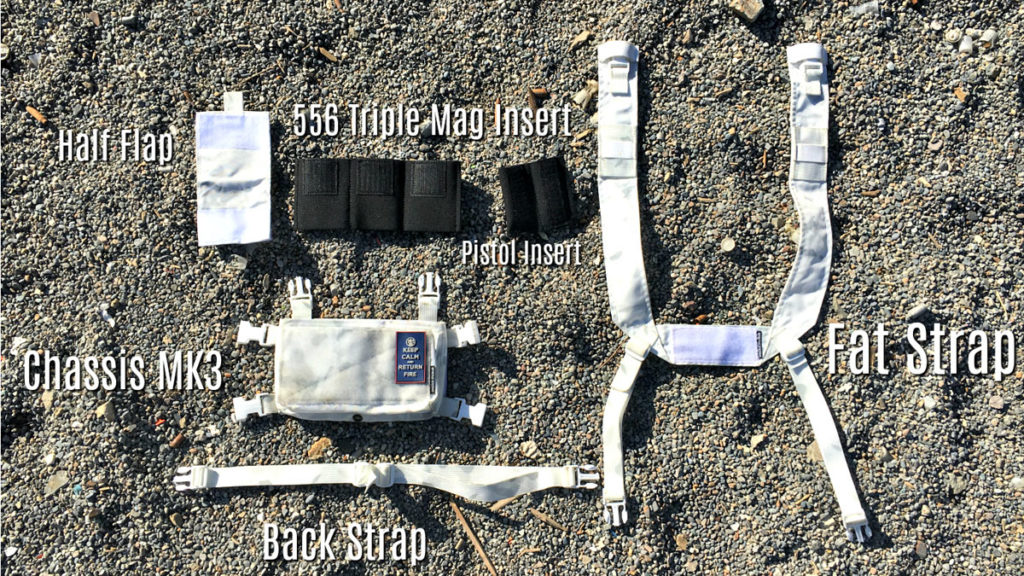 These are the individual components of my personal set up.

Once those pieces are together, the sky is the limit. The two internal pouches of the Micro Fight Chest Rig Chassis are lined with female velcro. This allows you to place a number of different internal organizers into them. The organizers are made of a black elastic material with male velcro fields on either side. Allowing them to be put in place and hold their position in the main pouch while still being able to stretch and accommodate whatever you happen to place in them.

Size wise they offer elastic pouches sized for M4 magazines or AR10 Magazines. Of course, these are just general dimensions. You can put a soda can into the AR10 Mag insert due to its elasticity. These also come in different sizes, such as single, double, or triple magazine insert in the case of the M4, which takes up the entire width of the chest rig pouch.

Beyond that, there are smaller inserts which are sized for pistol magazines, offered in a double insert. While they will fit most any pistol magazine, from single stack 9mm up to double stack 45 ACP, they also fit most anything else similarly sized. I’ve used them to good effect to carry a Gerber Multitool and a flashlight.

If you happen to need to further secure items, they offer Half and Full Flaps. They’re pretty much what they sound like. A flap that can attach to the velcro field inside the back pouch pocket or on the velcro field behind the chassis. It then can fold over and secure itself on the female velcro field that lines the front, securing items underneath it. 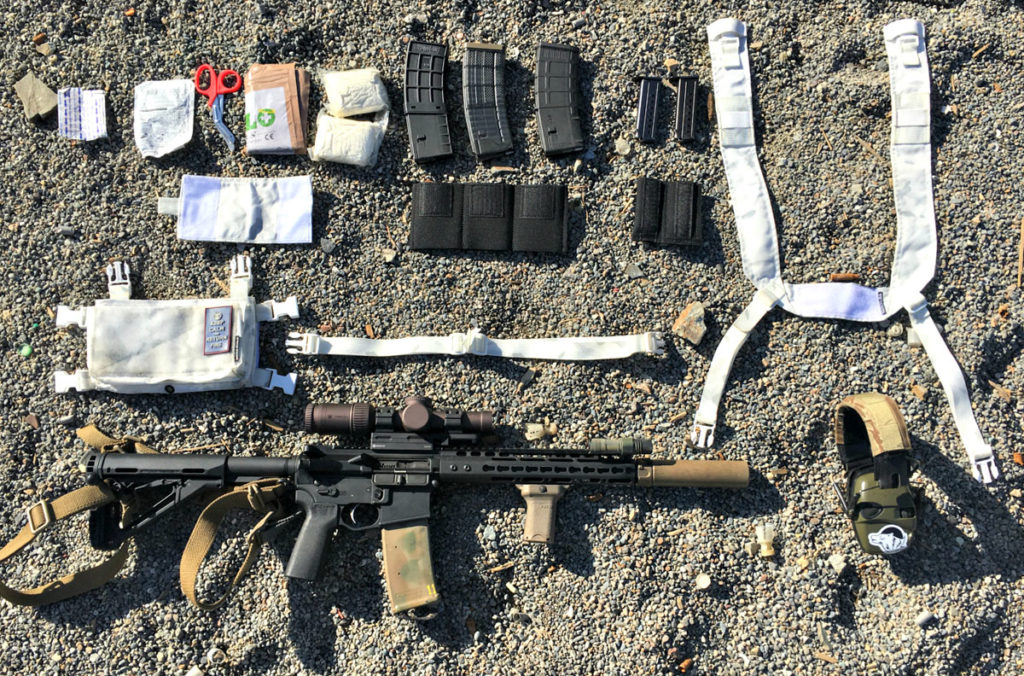 With this set up I can easily carry three rifle magazines, two pistol magazines and a solid blow out kit.

There are a number of additional components that can be added to the MFCR, such as expander wings, allowing you to carry a radio, extra mags, water bottle, etc. Or, you could add the S.A.C.K. (Sub Abdominal Carrying Kit). Think of the S.A.C.K. as a fanny pack of sorts. It attaches via velcro to the back of the chassis and hangs below the MFCR. This opens up more storage space if you run out of room (Many people use it to carry medical supplies.) A pretty clever cinch system is built into the bottom that lets you easily carry and deploy a tourniquet, or most any other similar sized item. Simply pull it down away from the S.A.C. which loosens the cordage, and pull the item free.

But, is it comfortable? In my experience, yes it is. I ran an MFCR in a two day Nighfighter 101 Carbine Course, taught by Kyle Lamb of Viking Tactics, hosted at the Sig Sauer Academy in New Hampshire. It performed admirably for me there. I was able to set it up with exactly what I needed for the course. This included three M4 magazines across the back, two pistol magazines up front as well as a half flap which secured some emergency first aid supplies (which I gratefully did not need).

I wasn’t sure what to expect showing up to the course and was planning on wearing the chest rig over a number of layers including my large down jacket. As it turns out the Sig Academy has a temperature-controlled 50m indoor range. Bonus! So I ended up wearing the rig over a t-shirt. The adjustment on the MFCR easily scales to any size. Whether you are bundled up, just wearing a single layer, or kitted up with body armor, it fits. 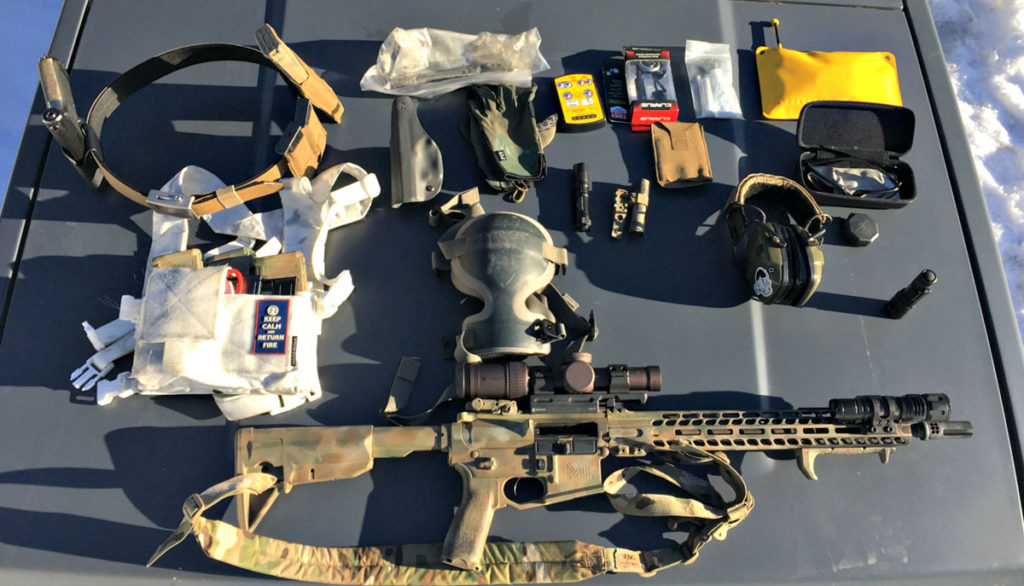 This is my entire loadout for the Viking Tactics Nightfighter 101 Course I took at the Sig Academy.

Speaking of body armor, the MFCR plays well with a lot of carriers. Through the use of Fastex buckles, you can buckle the MFCR into the front of a number of plate carriers.

Due to the extreme modularity of the Micro Fight Chest Rig, other manufacturers have created modular pieces that can be used in conjunction with it. By way of example, a company called Persec Gear makes a Zipsert. It is a piece that drops into the top of your MFCR, turning the entire length of one of the chassis pockets into a zippered compartment. So if you feel the flap doesn’t secure your belongings enough, this is a great option. 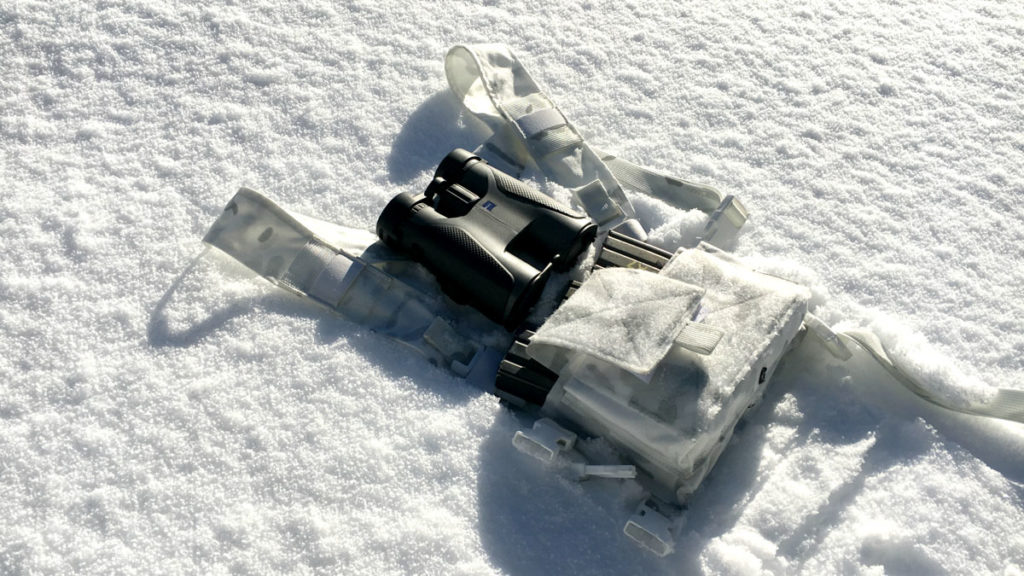 For me, the MFCR is a more functional way to carry a set of binoculars while out hunting.

On top of that, the sky is the limit with respect to modifications. I actually turned my MFCR into a hunting rig of sorts. Using velcro panels to embed rare earth magnets and cover the existing velcro, I turned my MFCR into a much more functional Bino Harness. I could easily remove and replace my 10×42 binoculars without making a sound. The magnets mounted into the half flap are ninja quiet and very secure. This lets me carry my binoculars until needed and not disturb any game when I take them out to glass. 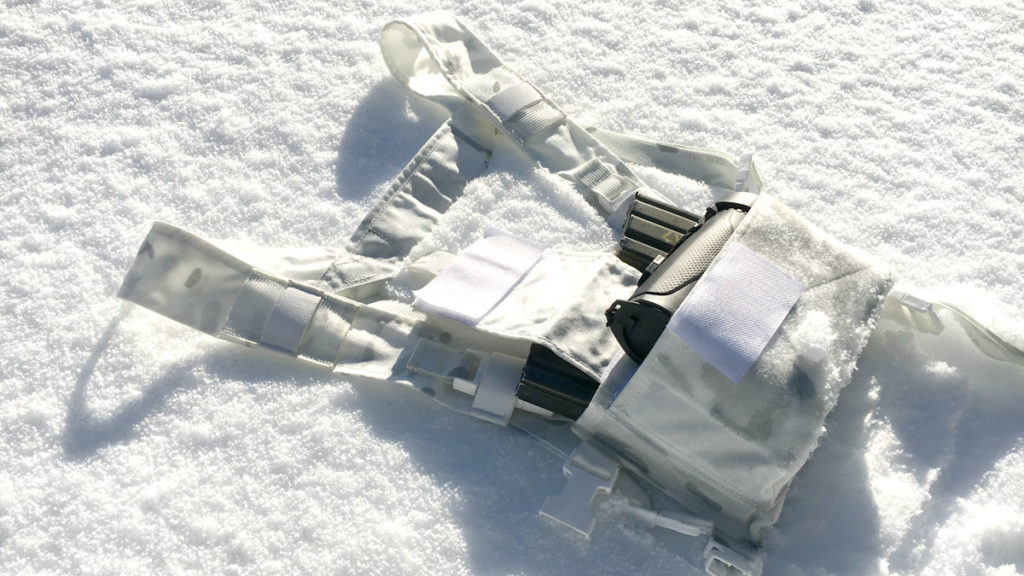 Through using velcro panels and rare earth magnets, it is easy to set up the Flap to open and close silently, without the sound associated with velcro.

If you are looking for a good chest rig that you can tailor to pretty much any activity or mission, take a hard look at the Spiritus Systems Micro Fight Chest Rig.

You can see the video review of the Micro Fight Chest Rig here. 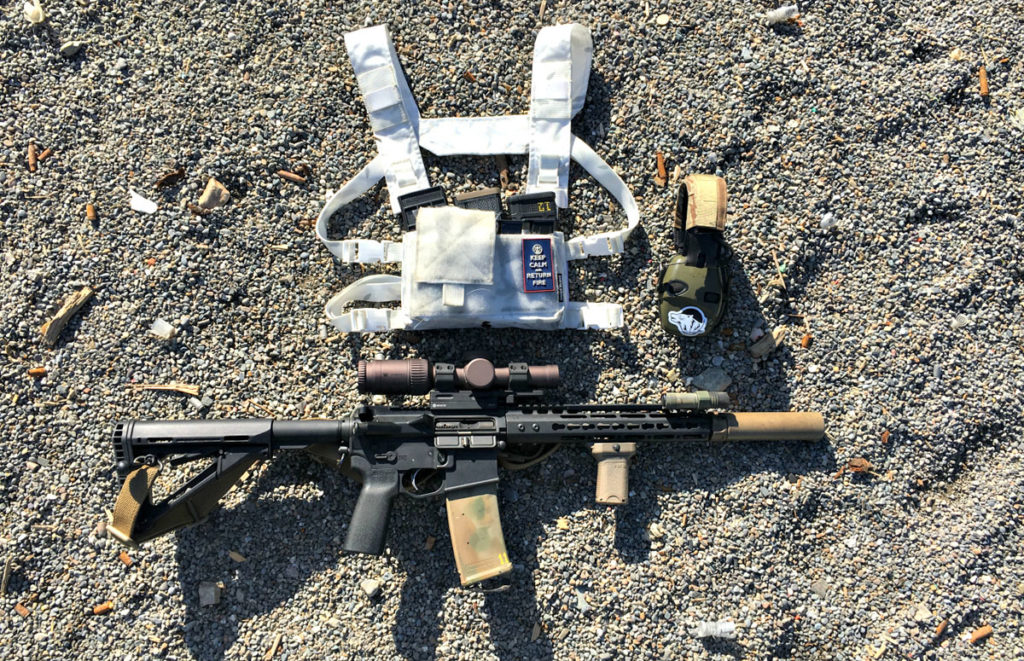 A turn-key chest rig that is adaptable to any platform.

Visit Spiritus to learn more about their chest rigs by clicking HERE.

***Shop GunsAmerica for all your tactical needs!***

Next post: Foam Action Sports FoamRest: Not What You Think from the Price Tag