The Perfect Noob Gun: The Handgun That Is Just Right for the New Shooter 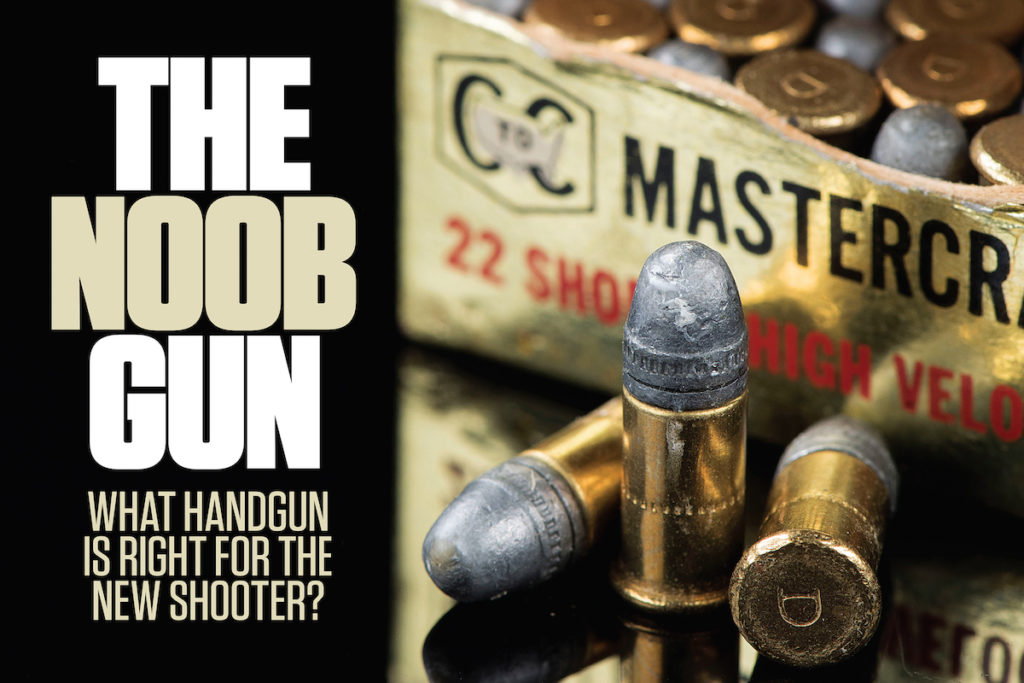 Editor’s Note: The following is a syndicated article by author Tamara Keel that first appeared in USCCA’s Concealed Carry Magazine Volume 13, Issue 3, April 2016 under the title, “The Noob Gun: What Handgun Is Right for the New Shooter?”

“I am shopping for my first handgun and I’m a complete newbie to shooting. What should I buy?”

This question has been asked in gun stores, on internet forums and of the designated Office Gun Person more times than there are grains of sand on the seashore. Traditionally, there have been two different answers.

The first answer is “Get a .22 pistol.” There are sound reasons for this. If a new shooter is going to develop proficiency with a gun, then it would be hard to think of a better implement with which to develop this proficiency than a full-size .22 plinking pistol. A Ruger Mark III or Browning Buckmark has an easy-to-manage single-action trigger and is mild to shoot with minimal recoil and muzzle blast to interfere with learning trigger control or cause the novice to develop a flinch.

The ammunition, while not as cheap as it once was, is still a fraction of the cost of even the cheapest centerfire ammo. These days, one can get .22 pistols that replicate most of the popular centerfire service autos, as well as compact .22 plinkers, like the Ruger SR22 or Smith & Wesson M&P22C, that make these guns excellent “understudies” for more serious defensive pieces. All these are on the positive side of the .22 ledger.

Get A Centerfire Service Pistol

However, there’s another camp that recommends going ahead and buying the defensive pistol, under the theory that most people aren’t going to take up shooting as a hobby. Rather they want to buy a pistol for defense and they’re going to seek out a minimum of training, if they even bother to train at all. They’re going to buy that one handgun and they’re going to throw it into a sock drawer or purse or glovebox, and that’s the only one they’re going to have if and when the balloon goes up. Under those circumstances, the second theory goes, shouldn’t they have the most effective one possible?

Having the chance to be in a retail/range environment again, where I get to see a bunch of new shooters and first-time buyers in action, I’m starting to wonder if there might not be something to both these camps. I see lots of people experience a first range visit with compact defensive pistols and .22 autos, and I have to wonder…

And The Answer Is…

There are some shooters who, for reasons of size, infirmity and/or plain old general trepidation about guns, just have a hard time with the typical defensive pistol. The double-action revolver or compact auto that can be mastered by 90 percent of shooters remains, for whatever reason, beyond others’ ability to manipulate well or with any degree of confidence.

And yet often I see this same sort of shooter doing great with one of the smaller .22s, like the aforementioned M&P Compact, and I wonder to myself which would be more likely to deter a bad guy: someone reaching a trembling hand for a gun that they’ve hardly ever fired because they are almost as afraid of it as they are the criminal? Or someone reaching for a little pistol that they feel confident in using to make little .22-inch holes all around the middle of the target? Is confidence enough of a force multiplier to outweigh caliber?

I don’t know that I know the right answer to that question, but it’s something worth thinking about.