New From Timney Triggers: The Elite Hunter for Remington 700 Rifles

For the 2019 SHOT Show, Timney Triggers  rolled out their newest product, the Elite Hunter trigger for Remington 700 bolt-action rifles. Before SHOT, I secured a new Elite Hunter for testing and evaluation. What I discovered was a fine aftermarket trigger, one that breaks very cleanly, doesn’t hang up, and actually did help improve my accuracy. 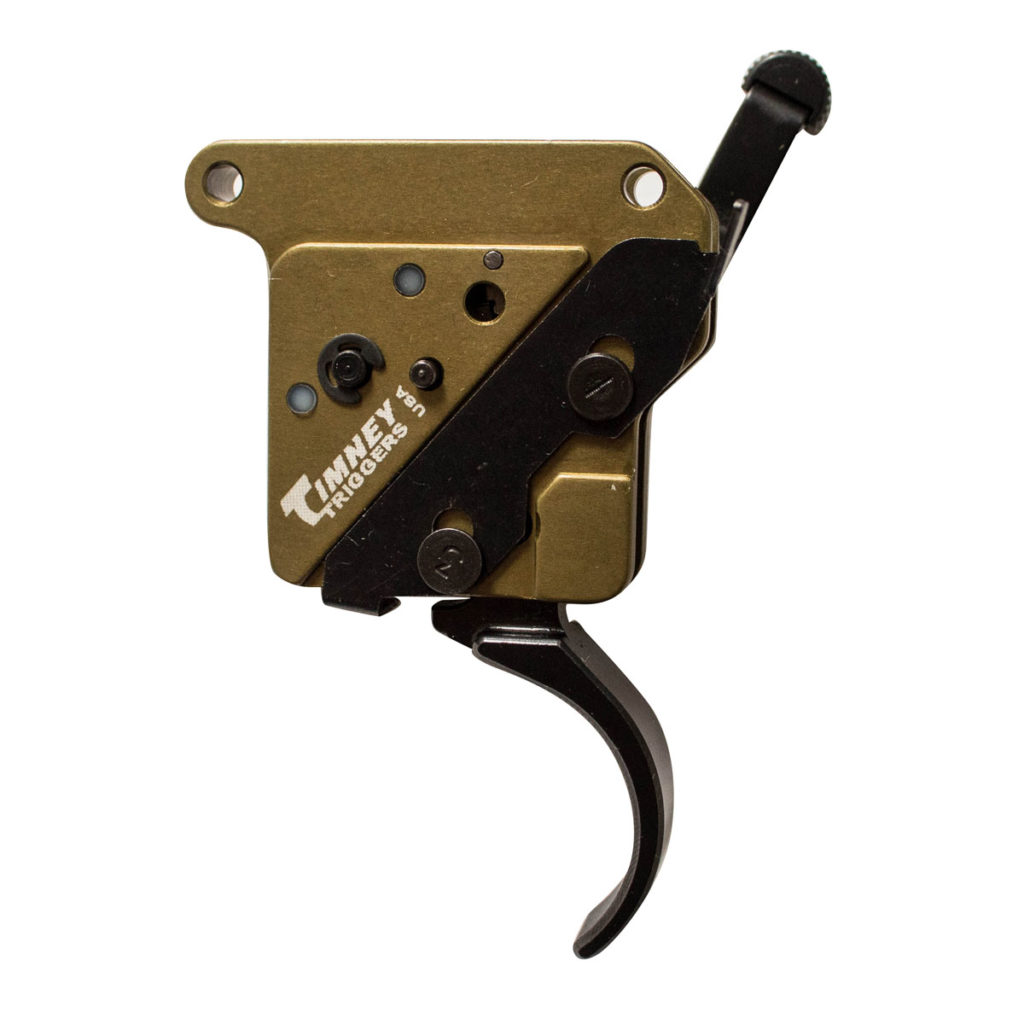 Left side view of Timney’s new Elite Hunter. Note bolt catch release mechanism this side, and the top of the safety at the rear.

Admittedly, my testing was limited given the short time between the Elite Hunter being ready for evaluation and my SHOT Show deadline. I did not, for example, use a Remington 700 outfitted with the new Timney during a hunt. But given what I experienced at the shooting range, I’d recommend this trigger to anyone with a Remington 700 who wants to squeeze out more accuracy, especially for any longer-range shooting and hunting.

I had a brand-new Remington 700 SPS on hand, chambered in 260 Remington. The SPS (Special Purpose Synthetic) is essentially a 700 bolt with a synthetic stock. It sports a 24-inch barrel with a right-hand 1:8 twist and came equipped with Remington’s X-Mark Pro trigger, standard on most 700 models since 2006. 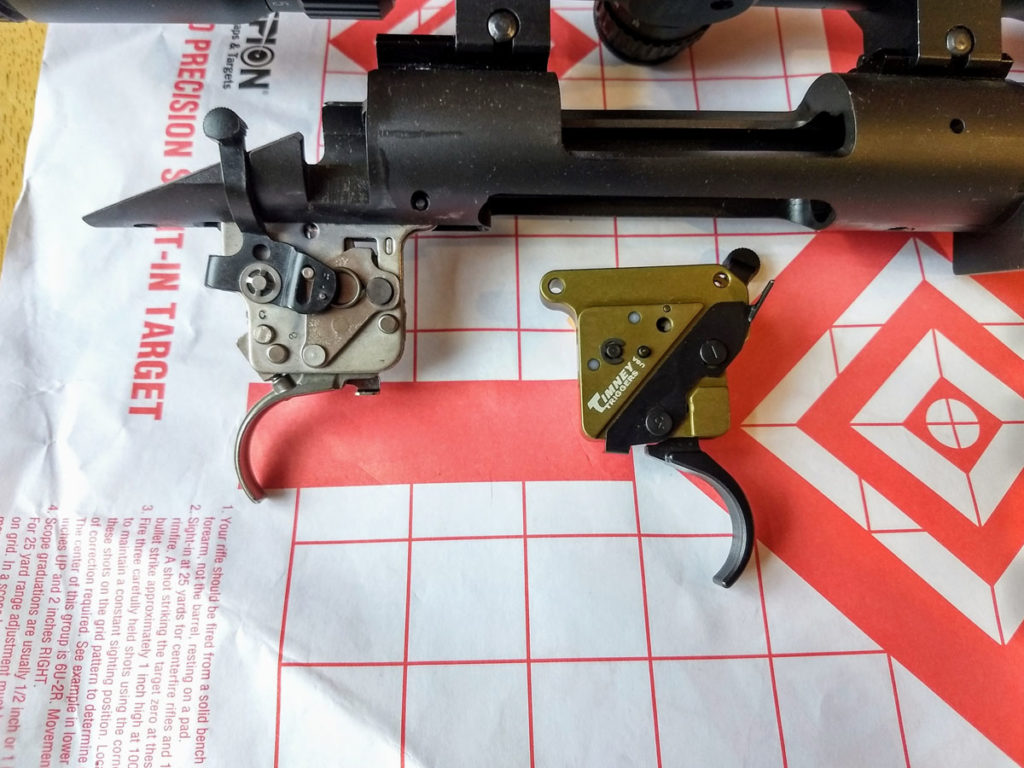 I decided the best way to test out the Timney trigger was to first use my rifle with the original X-Mark Pro, record my results and impressions, and then replace it with the Elite Hunter.

According to my Lyman Digital Trigger Pull Gauge, the X-Mark Pro had an average trigger pull weight of approximately 3 pounds 8 ounces. The X-Mark Pro broke nicely during dry firing, too. A good start, I thought.

What I wanted to find out was what sort of trigger control and accuracy I could get with my standard Remington 700 SPS and three brands of 260 Rem. ammunition: Federal Premium’s Big Game rounds loaded with a 140-grain Sierra GameKing bullets; Nosler’s Trophy Grade and 130-grain AccuBond projectiles; and, Remington’s Core-Lokt firing off a 140-grain bullet Core-Lokt bullet.

I zeroed the SPS with the Core-Lokt at 50 yards, then moved to the 100-yard lane. I also cleaned out the bore with a copper brush and Super NANO Detergent’s Bore Cleaner after my first five shots with the Core-Lokt, and then at 10 shots, and whenever I switched over to a different brand of ammunition.

I shot some solid 4- and 5-shot groups with the Nosler and Federal ammunition, including a 1.12-inch group, five shots, with the Federal. But the groups, across the three brands, averaged closer to 1.75-inches, and I did several groups at 2.0 to 2.5 inches.

No doubt, some of that was on me. Give me the best rifle in the world and I am still capable of pulling a shot. Or two.

Yet, while the X-Mark Pro is a pretty solid factory trigger, at times it held up slightly as if the sear wasn’t being cleanly released. Each time this hold up occurred, my shot went wide right or left by a couple inches. Several other times the trigger pull was hampered by a gritty feel.

Next, I removed the X-Mark Pro and installed the Timney Elite Hunter. Per Timney instructions, I first made sure the rifle was unloaded, moved the safety into the “SAFE” position, and removed the bolt. Then I separated the stock from the receiver and barrel.

The Timney replacement process was straightforward if not all that easy at times for this kitchen-table gunsmith. Pins at the top front and top rear of the original trigger (“A” and “B” in the photo) needed to be tapped out, going from left to right. 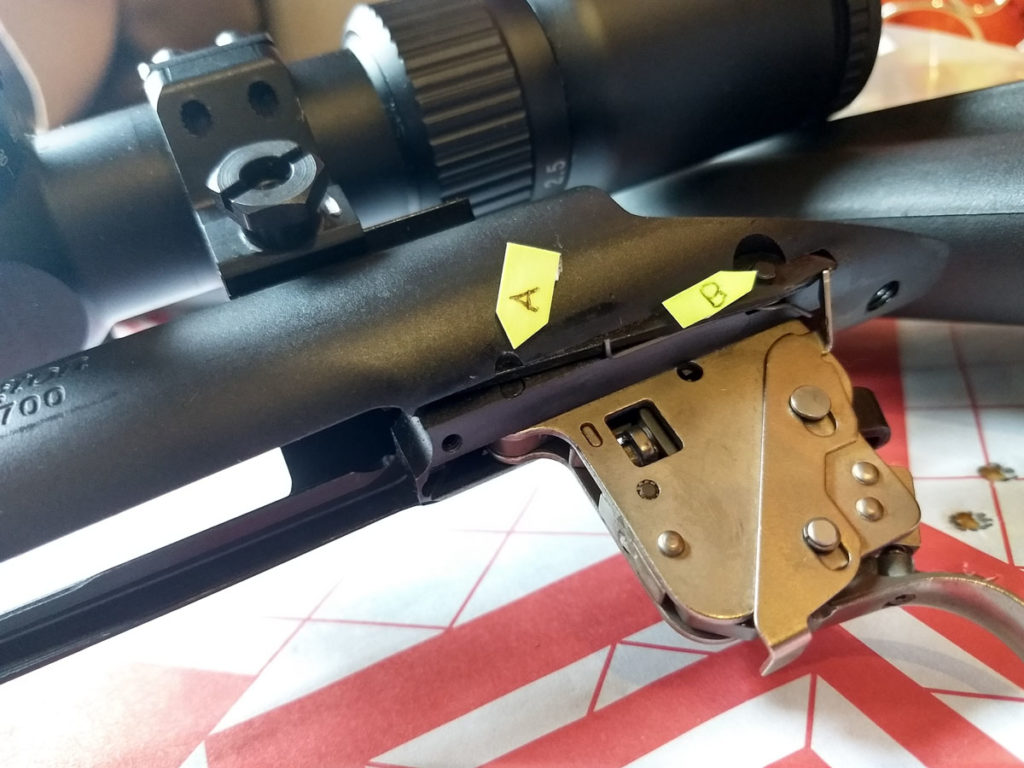 Replacing the Remington 700’s original trigger starts with removing the two pins holding the original in place, Pins A and B. 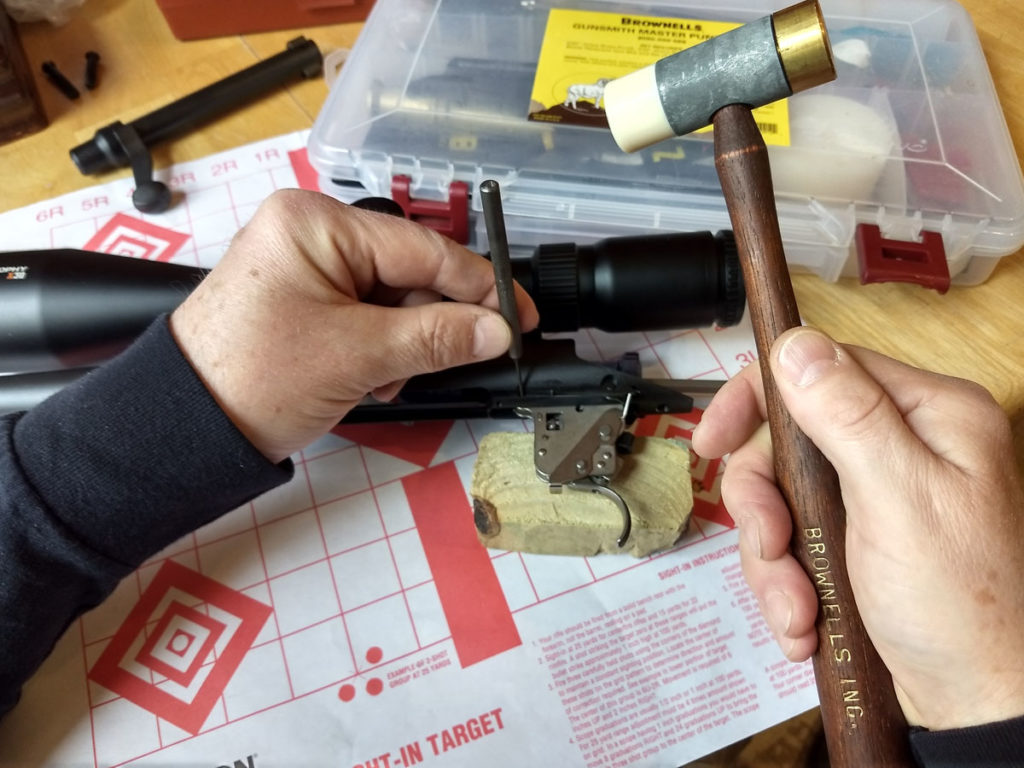 Tapping out the two pins on the original trigger.

I used my Brownell’s Gunsmith Master Punch Set, found the correct punch and hammer, and got to tapping.

Timney recommends you do your best to keep the metal bolt stop and the bolt stop spring–both located at the top, left of the old trigger–in place as you tap those pins back. Well, it was easier written into the instructions than accomplished, by me, at least. The bolt stop and spring popped out as soon as the trigger pins were out far enough to release tension on the trigger.

I spent the next 30 minutes figuring out how to secure the spring in place and drive the pins back at the same time. 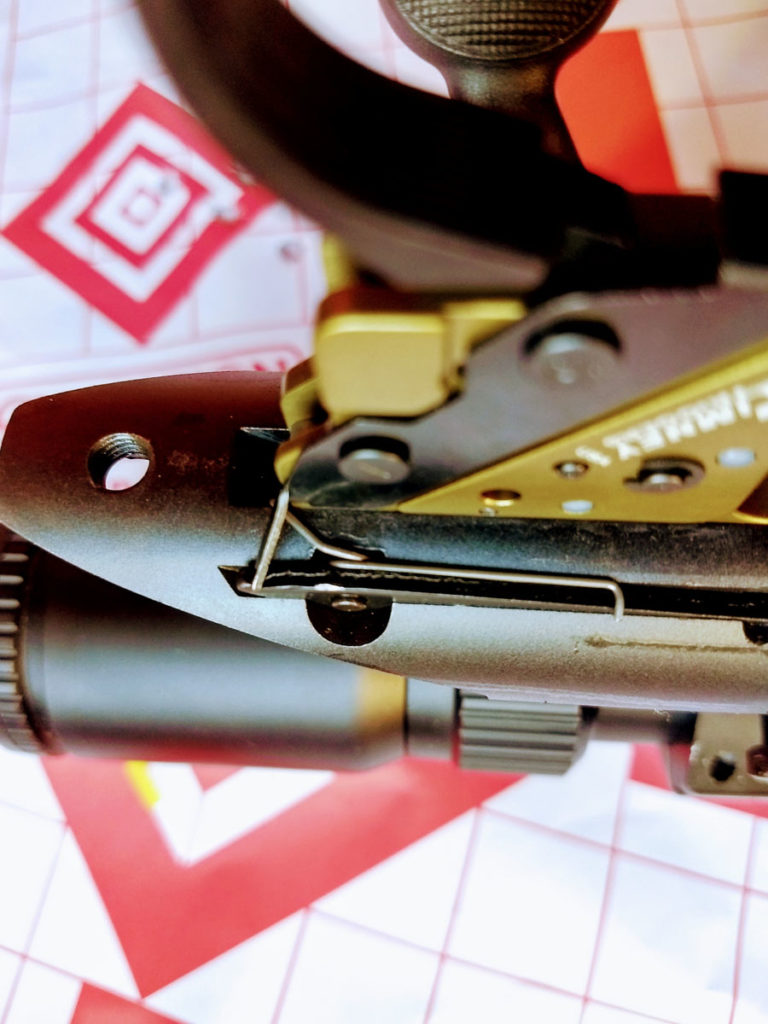 The bolt stop pin gave the author some trouble, but eventually got put back into place along with the Timney Elite Hunter.

Elite Hunter installed, I returned to my range, re-zeroed the rifle and then shot a good number of four- and five-shot groups for accuracy and general trigger function. 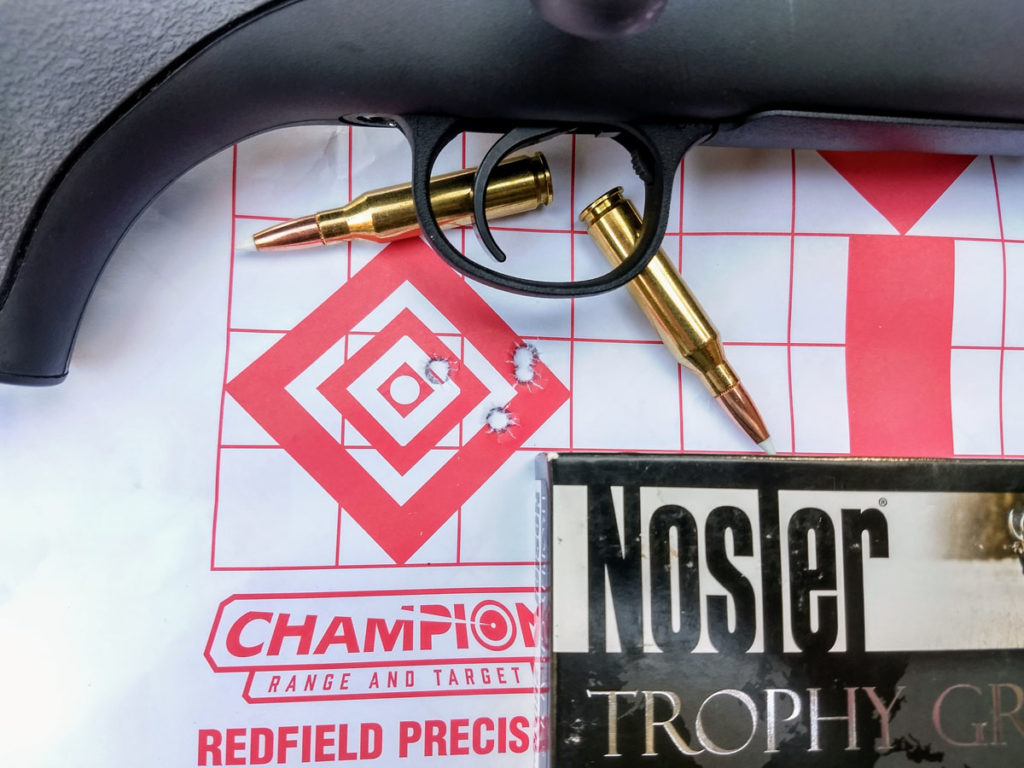 McCombie saw his four- and five-shot groups, at 100 yards, shrink .5-inches or more once he installed the Elite Hunter, including this .74-inch group with Nosler’s Trophy Grade ammunition.

The pull weight on the Hunter Elite averaged 2 pounds, 4 ounces. I could have adjusted that down or up, between 1.5- to 4.0-pounds, and adjusted for over travel, too. But the Elite Hunter felt great right from the start. 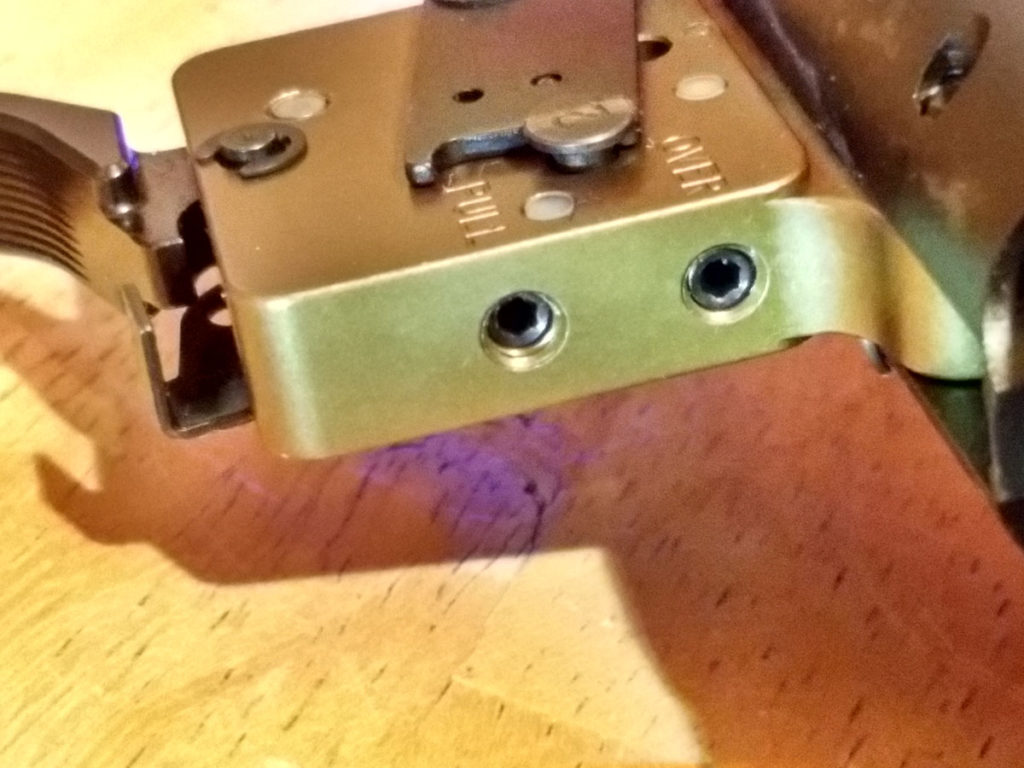 Front view of the Elite Hunter: with a small Allen wrench, Over Travel on the trigger (R) and Pull Weight (L) can be adjusted.

The Elite Hunter broke very cleanly, with never a hesitation or hold up and no gritty feel. The Elite Hunter has a slightly wider trigger shoe than the X-Mark–.322-inches wide for the X-Mark versus .377-inched for the Timney–with grooves running down the length of the Timney’s shoe for a better feel between shoe and finger pad. 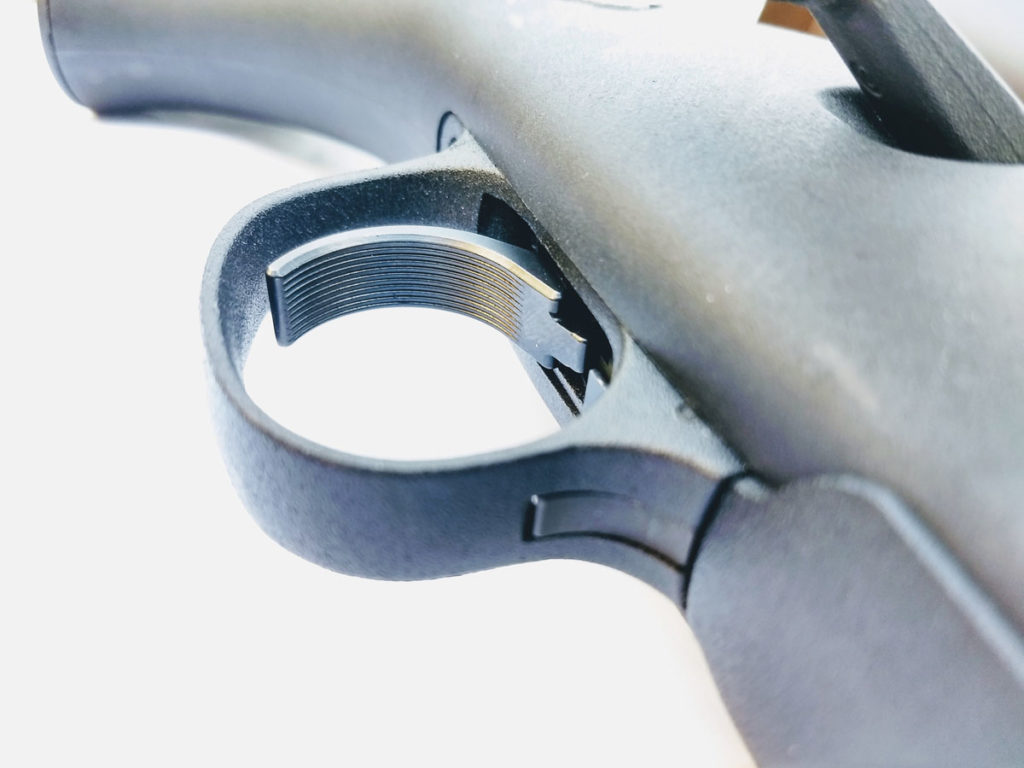 The Elite Hunter has a slightly wider trigger shoe than the X-Mark–.322-inches wide for the X-Mark versus .377-inched for the Timney–with grooves for a better feel between shoe and finger pad.

The trigger’s sear and trigger shoe are precision-machined, and heat treated to a 56 Rockwell hardness, with a black oxide trigger coating and an NP-3 plated sear for maximum lubricity.

The new trigger has a suggested retail of $149.99, which may be a bit less in stores and online. The Elite Hunter is backed by the Timney “No Hassle, Lifetime Warranty.” If it doesn’t work, send it back and Timney will replace.

Clearly, the Elite Hunter is a much better trigger than the SPS 700’s factory trigger, even though I assume the X-Mark Pro will smooth out somewhat with use. But, do you need the Elite Hunter?

If your Remington 700 is used for hunting and you regularly take deer, for example, at 100 yards or less, your current rig will do just fine. Pragmatically speaking, even pulling a shot a couple inches at 100 yards because the trigger binds up slightly will still put that shot squarely into a deer’s vitals.

But if you are a hunter willing and able to take a longer-range shot? You’ll want the best chance at a clean kill, and that means a high-quality trigger like the Elite Hunter.

The best recommendation I can give the new Timney trigger is this one: the Elite Hunter is staying in my Remington 700 SPS. I’m glad to try out other triggers and see if they are better than the Elite Hunter. However, the people at Timney have set the quality bar very high.

***Shop GunsAmerica for your next Rifle***

Next post: First-Look and Review: The New LTO Tracker2 Thermal From Leupold