Tom Selleck Quietly Resigns from NRA Board of Directors

Tom Selleck will remain a member of the NRA but leave the directing up to other members of the board. (Photo: Selleck/Instagram)

One of the most recognizable faces of the NRA is stepping down. This year Tom Selleck will leave the NRA board of directors for work reasons. He served as a member of the board for the past 12 years and gained membership at the age of 8.

As an actor he’s done a lot to represent the NRA as a public and steady supporter of gun rights. As a member of the board of directors of the NRA he’s done a bit less.

“He has nothing to do with policy,” said Selleck’s publicist Annette Wolf. “He’s never been active on the board or anything the NRA engages in. He’s almost always been a silent board member.”

“Tom Selleck has stepped down from the board of the NRA due to his work schedule,” she continued. “Mr. Selleck remains a member of the NRA.”

While he may have participated little on the board, Selleck has done a lot to promote the NRA. His popularity drew memberships and donations, and he personally donated firearms from his TV and movie projects to the NRA Museum over the years. 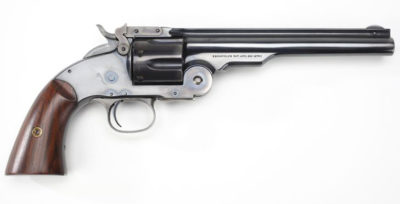 Selleck donated this Shofield from “Crossfire Trail” to the NRA Museum. (Photo: NRA)

Some people might see this as Selleck distancing himself from the gun rights organization. Others will think he is making room for new leadership on the NRA’s board of directors.

Last year former president and current board member Marion Hammer called for a ban on bump stocks for rifles. Her support for new forms of gun control shocked NRA members and gun-rights advocates.

Actions like these have led many gun owners to believe that the NRA, or at least some of its leaders, were weak on Second Amendment issues. Or worse, that they were willing to scare gun owners into raising more money for the NRA by increasing the likelihood of future forms of gun control.

There has been a rise in tension between these softer members and so-called “gundamentalists” of the NRA. Hammer even called them “the enemy within.”

Adam Kraut, a prominent gun rights attorney, is one gundamentalist running for membership on the board of directors. As a member of the Firearms Policy Coalition and Firearms Policy Foundation, Kraut has proven to be a Second Amendment purist.

What’s your take on Selleck stepping down?  Also, what do you think of the growing rift between 2A purists and the old guard?

Next post: Browning’s M1911 and the Tale of a U.S. Combat Engineer in Italy

Previous post: Vermont Police: ‘Turn In Your Bump Stocks… Or Else’