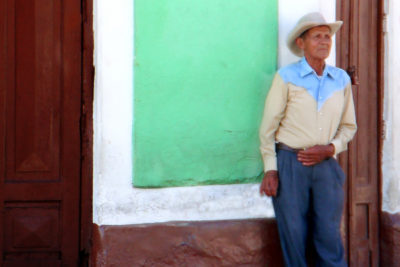 The people have no way of protecting themselves against government-funded gangs. (Photo: Wikimedia Commons)

Venezuela’s 2012 Disarmament Law banned the private ownership of firearms, and now, according to a new report, its citizens are beginning to realize how gun rights could have kept crime and government tyranny at bay.

“Guns would have served as a vital pillar to remaining a free people, or at least able to put up a fight,” Javier Vanegas, a Venezuelan teacher of English now exiled in Ecuador, told Fox News. “The government security forces, at the beginning of this debacle, knew they had no real opposition to their force. Once things were this bad, it was a clear declaration of war against an unarmed population.”

Under then-President Hugo Chavez, the “Control of Arms, Munitions and Disarmament Law” took effect in 2013 and banned the legal commercial sale of guns and munitions to all except government entities. Only 37 firearms were voluntarily surrendered, and over 12,500 were confiscated by force, which represents a small percentage of the country’s estimated one to six million firearms.

But banning law-abiding citizens from firearms ownership has meant that the only entities with access to guns are criminal organizations, some of which, known as “colectivos,” act as proxies for government forces to stamp down pro-democracy opposition.

“They were set up by the government to act as proxies and exert community control. They’re the guys on the motorcycles in the poor neighborhoods, who killed any protesters,” Vanessa Neumann, the Venezuelan-American president and founder of Asymmetrica, a Washington, D.C.-based political risk research and consulting firm, told Fox. “The gun reform policy of the government was about social control. As the citizenry got more desperate and hungry and angry with the political situation, they did not want them to be able to defend themselves. It was not about security; it was about a monopoly on violence and social control.”

Now Venezuelan citizens are beginning to regret surrendering their right to own a firearm.

“Venezuelans didn’t care enough about it. The idea of having the means to protect your home was seen as only needed out in the fields. People never would have believed they needed to defend themselves against the government,” Vanegas continued. “Venezuelans evolved to always hope that our government would be non-tyrannical, non-violator of human rights, and would always have a good enough control of criminality.”

Another man, Eduardo Espinel, fled the country due to the rising threat of kidnapping. He told Fox News that “everyone else but the common citizen” has access to a firearm.

“This law asks for the disarming of the common people, but everyone else can carry,” Espinel said. “The kind of law might make sense in a normal country, but in Venezuela, it makes no sense. People are faced with crime and have no easy means to defend themselves.”

Maribel Arias, who also fled the country two years ago with her husband and four children, expressed a similar concern.

“The people of Venezuela should have rights for gun carrying because there is just too much crime and people should have the right to defend themselves because the justice system is not working,” Arias asserted. “If you call the police, the police come only if they want. If they capture the criminal maybe they will take away whatever they stole, but they normally go free again. It’s a vicious cycle.”

Next post: Something New and Old from CZ: BREN 2 Rifles and the Return of the Bobwhite